Tintypes – Last of the Cased Photographs

The last of the cased photographs are tintypes – which is actually a misnomer since they were not made of tin, but metal.  These were easy to make, inexpensive and durable.  An easy way to know if you have a tintype is to use a magnet – the pull will be felt even through the case.  Tintypes were made from about 1855 to 1880 – but once the carte-de-visite card photographs became popular in the 1860’s, fewer tintypes were made.  And after the 1860’s most of the tintypes were in paper envelopes instead of a case.

I have four tintypes.  The first is of a baby – Alice Clark Linton, daughter of Edward Edwards Linton and Catherine Elizabeth Taylor – in fact, their oldest child.  She is also the granddaughter of John Compton Taylor and Susan Clark Edwards; and William Linton and Eliza Lyon Moran.  The man holding Alice is a mystery.  I believe it might be her father, Edward Linton, but that is only a guess.  Alice Linton was born in 1855, and she looks to be about one to two years in this photo.  She wears a lovely dress made of beautiful material.  Her little cheeks are tinted.  The gentleman is gently holding her head for a clear photo – in which he succeeded – but her feet were not so still! 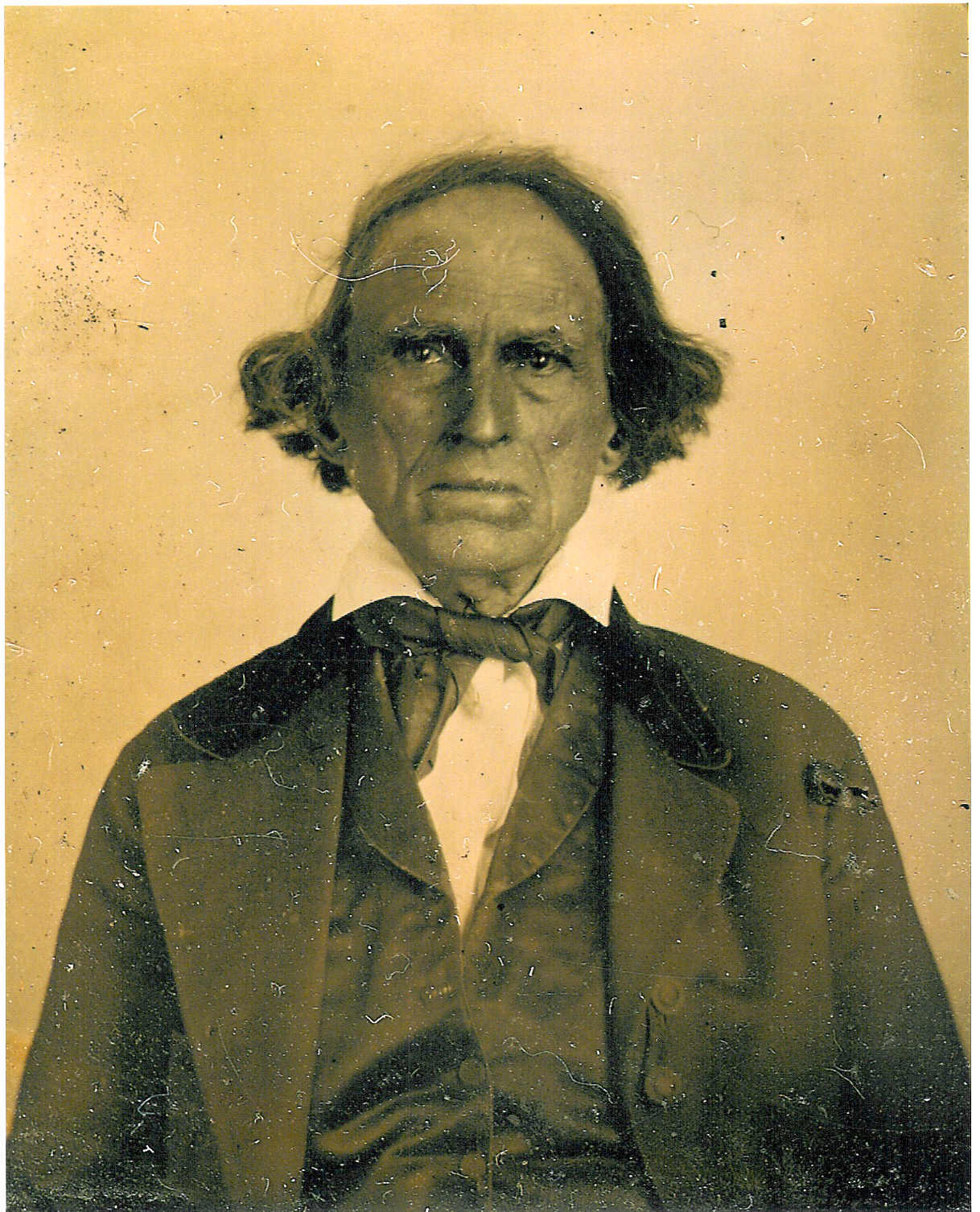 The next photo is that of John Compton Taylor.  He, his sons Edward and Benjamin, his daughter Margaret, his second wife, Susan Kimberlain, and their two daughters, Mary and Sarah, were soon to move to Cape Girardeau County, Missouri.  I believe these photos were taken before the journey began.  Catherine Elizabeth Taylor Linton, John Taylor’s oldest daughter, was the only child remaining in Kentucky.  These photos would be remembrances for those leaving, and those left behind.  This particular photo was said to be Captain John Linton.  However, he died in 1836, long before photographs were introduced into the United States.  After I came to that conclusion, I thought perhaps it could be his son, Rev. Benjamin Franklin Linton.  But I have recently seen a photograph of Benjamin Linton, and this is not his photo. 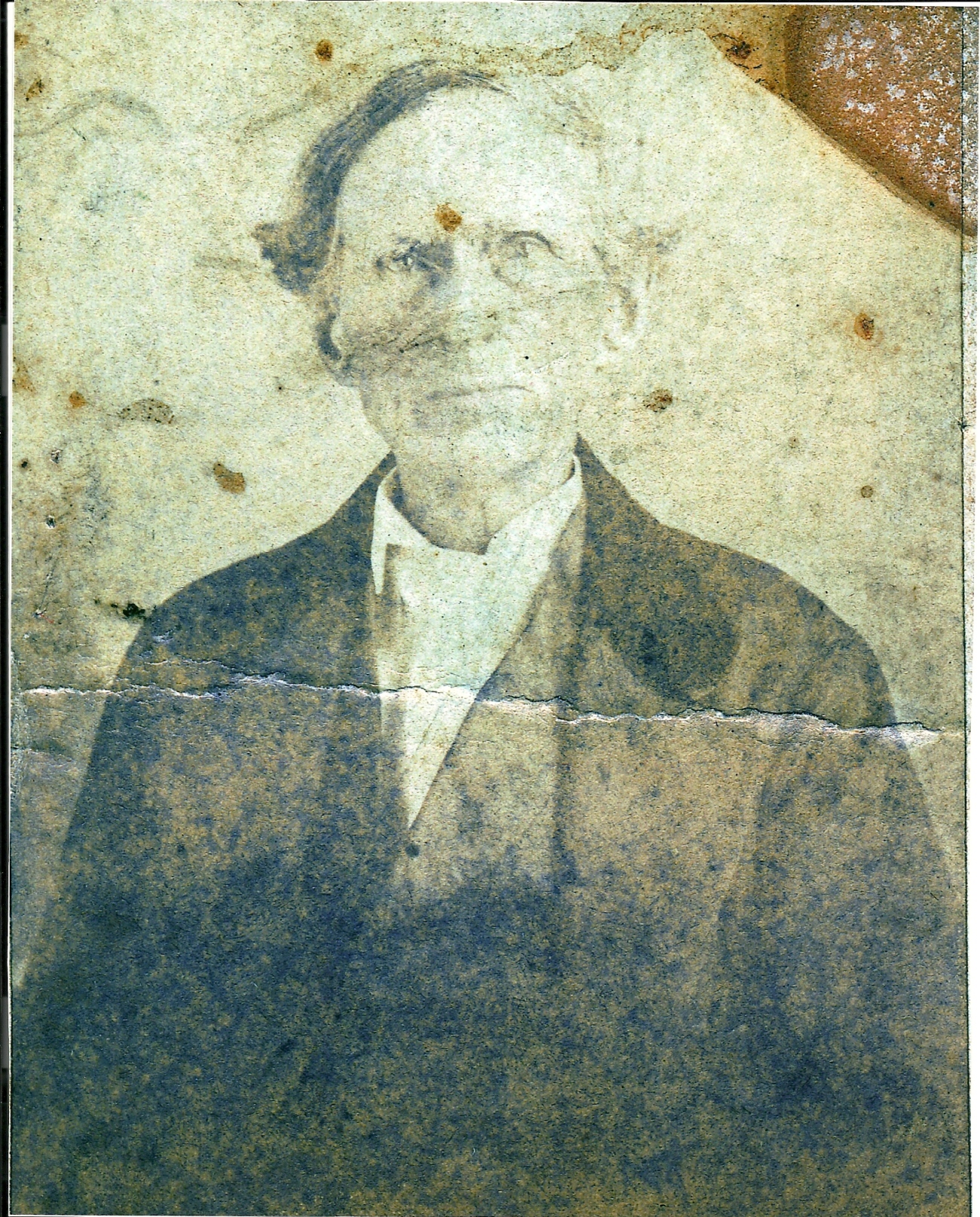 Then I put this photo next to one of John Compton Taylor.  There is absolutely no doubt.  In this photo, his hair is longer.  But look at the ears – John Taylor’s ears are very distinctive – and you can see them in both photos.  This is a carte-de-visite photo card.  Can you see the resemblance?

You can see the decorative mat, the shape being a double elliptical with stamped decoration.  This was used from 1858 to 1860.  The reinforced corners and sides of the preserver also date to this time period.

The next two tintype photographs are of William Linton (son of Captain John Linton) and his wife, Eliza Lyon Moran.  William’s photograph is nicely tinted – his cheeks and his handkerchief.  He wears the clothing of the period (1858-1860), but is extra dapper with his light-colored vest.

William Linton’s mat is a double elliptical, with stamped decoration.  The preserver, not shown is decorative and has reinforced corners.

Eliza Lyon Moran Linton doesn’t see very happy in this photo, although neither was anyone else during this time-period.  Part of her problem, William was a handful to live with!  I suppose there is one in every family.  Eventually all their financial dealings were turned over to their son Edward Linton.  Eliza wears a very beautiful lacy cap.  It is hard to see the rest of her outfit due to deterioration, but if greatly enlarged there are little embroidered embellishments on her cape, with more on the actual dress.

These are such precious gifts from earlier generations.