Will of Thomas Woolfolk of Ballard County

By Kentucky Kindred Genealogical Research on June 10, 2018 • ( Leave a comment )

Thomas Woolfolk, originally from Virginia, married Nancy Jennings December 24, 1820, in Gallatin County, Kentucky.  He is noted as ‘Col.’; she is listed as the daughter of Jonathan Jennings.  In the 1850 Ballard County census Thomas is listed as 68, a farmer with $3500 worth of real estate, and was born in Virginia.  This census lists the other members of the family by initial only, but since we have Thomas’ will to go by we know their full names.  Wife Nancy is 48.  Children listed are Augustine, 25; John, 16; Frances Mosby, 23, a married daughter living with her parents; Susan Frances Mosby, an infant of nine months, granddaughter mentioned in Thomas’ will.  Daughter Ann Eliza, 26, is married to William Webb, 28, and together they are listed in their own household with their children:  Thomas, 9, who died October 1, 1852, of typhoid fever, according to the death records for that year; Catherine, 7, listed in her grandfather’s will; and Henry, 2.

Ballard County was formed from portions of Hickman and McCracken counties in 1842.  When I first read the following will I was heartily confused with a just quick scan of this will, because it was written in 1858, mentioned slaves in the bequests, but was listed in Will Book A, 1879-1924, pages 3-5.  With a little research I found that the Ballard County Courthouse was destroyed by fire on February 17, 1880, along with most of the early records.  Persons living in the county were most likely asked to bring in copies of records that went up in flames, adding these to the will book as they were brought in. 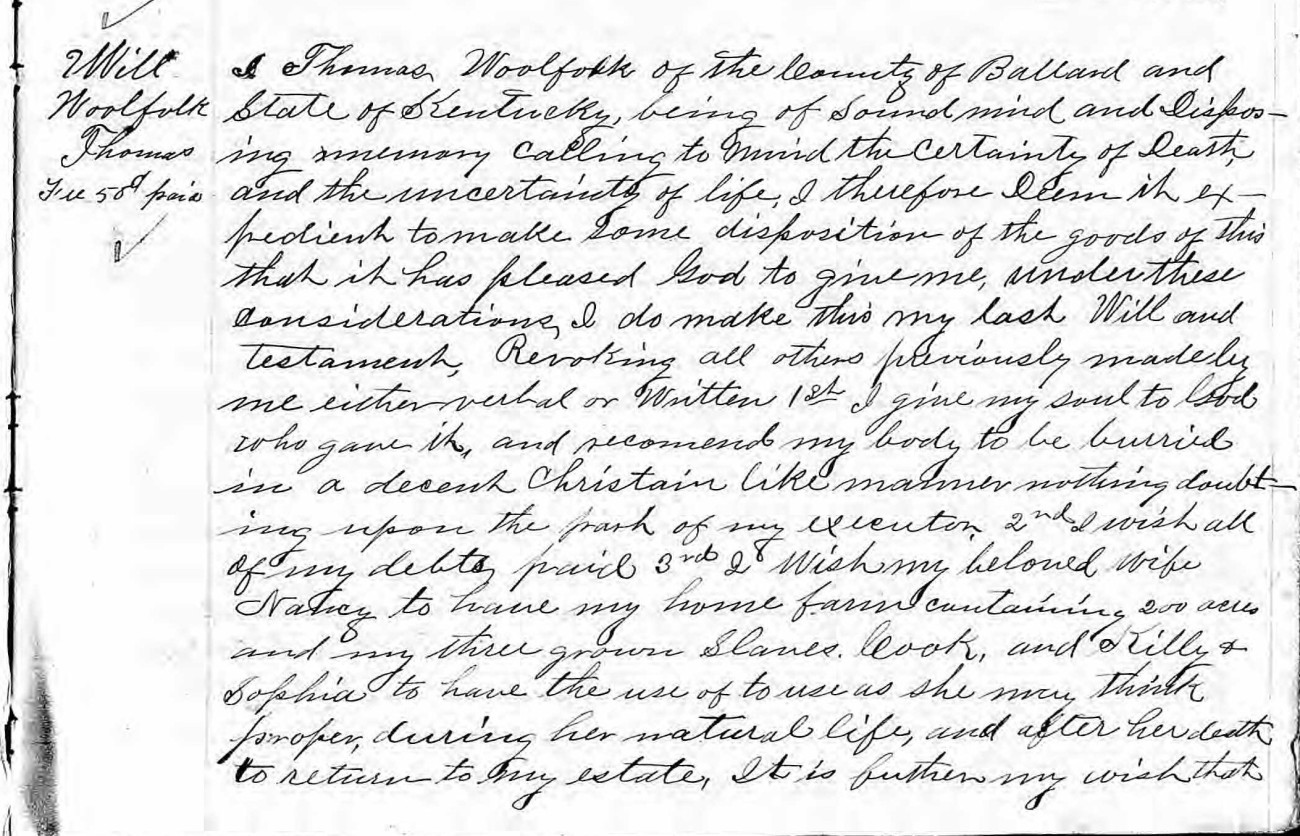 Will of Thomas Woolfolk

I, Thomas Woolfolk, of the County of Ballard and State of Kentucky, being of sound mind and disposing memory, calling to mind the certainty of death and the uncertainty of life, I therefore deem it expedient to make some disposition of the goods of this life that it has pleased God to give me, under these considerations, I do make this my last will and testament, revoking all others previously made by me, either verbal or written.

First.  I give my soul to God who gave it and recommend my body to be buried in a decent Christian like manner, nothing doubting upon the part of my executor.

Second.  I wish all of my debts paid.

Third.  I wish my beloved wife Nancy to have my home farm containing 200 acres and my three grown slaves, Cook and Killy and Sophia, to have the use of to use as she may think proper, during her natural life and after her death to return to my estate.  It is further my wish that

that all of my perishable property be appraised, and my wife Nancy shall be entitled to take one third of that at the appraisement.

Fifth.  I give to my granddaughter Catherine Webb 150 acres of land lying on the east side of the tract that I gave to Ann Eliza Webb and joining of Killgore, also one Negro girl named Fanny.

Sixth.  I give to my son Augustine Woolfolk the tract of land on which he lives or as has possession joining the land on the west of the tract that his house is on, containing 160 acres; also, a Negro boy named Charles.

Eighth.  I give to my son John Woolfolk 150 acres of land lying west of the tract of land on which I now live one and joining of the land on which P. R. Jennings lives on, also one Negro boy named John William.

Tenth.  I appoint my son Augustine Woolfolk my executor to this my last will and testament whereof I have hereunto subscribed my name this 9th day of October 1858.

I, J. Corbett, Clerk of the Ballard County Court, in the State of Kentucky, do certify that the foregoing last will and testament of Thomas Woolfolk, deceased, was presented in open court on the 22nd day of November 1858 and fully proven by the

Oaths of John Paine and Glenn Jennings, subscribing witnesses thereto to be the last will and testament of said testator, that he was of sound mind and memory at the time of signing and thereupon said will was established, filed and ordered to be recorded, whereupon the same, together with this certificate stands truly recorded.  Given under my hand this 25th day of November 1858.

I, T. L. Glenn, Clerk of Ballard County Court, do certify that the foregoing copy of the will of Thomas Woolfolk was on the 27th day of May 1886 lodged in my office for record and the same with this certificate and that of J. Corbett, Ex. Clerk, has been duly recorded in my office.