History of the Black Wedding Dress 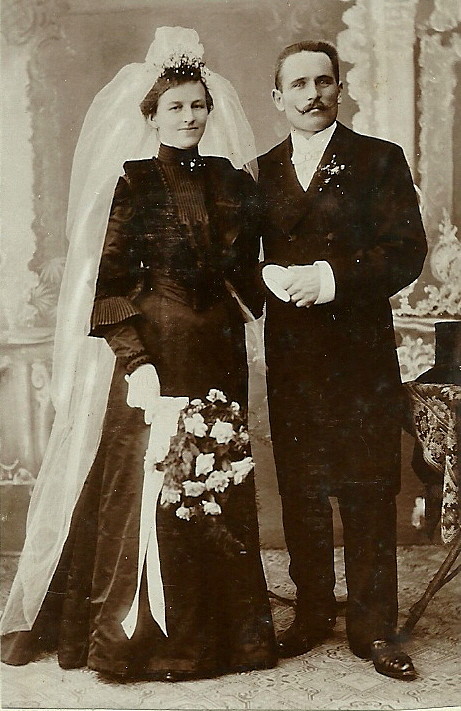 I was enthralled when this photo was received – the happy bride and groom on their wedding day.  But I must admit my surprise at the black wedding dress and white veil.  I decided to research wedding dresses and trace the history through the last 200 years.

In the very early 1800’s brides chose any color for their wedding gown.  Several reason were given for this decision.  The gown could be worn for more than the one occasion – and a darker color would not get dirty as easily as a white or light-colored gown.

Many thought wearing a black wedding dress bad luck.  I remember reading the Little House books by Laura Ingalls Wilder when young.  As Laura and Almanzo prepared for their wedding day and decided to marry earlier than planned – Almanzo’s sister was coming and they were afraid she would insist on a much larger wedding than they wanted – the wedding gown wasn’t even started!  The only dress finished at that time was a black dress – but Laura insisted that it wouldn’t be any more bad luck than another color dress!  And that was what she wore!

Black was also sometimes worn when marrying a widower.  I suppose this was a form of mourning for the first wife.

When Queen Victoria married Prince Albert of Saxe-Coburg and Gotha February 10, 1840, she wore a white dress covered in Honiton lace.  Descriptions of the gown and engravings of the couple encouraged many brides to follow suit.  By the 1870’s most brides wore white, but some still wore black into the 1880’s.

This wedding photo was taken by Julius Reichling in Augsburg, Bavaria, Germany, probably 1870-1885.