By Kentucky Kindred Genealogical Research on November 13, 2019 • ( Leave a comment )

This morning I’ve researched the John W. Proctor family of Danville, Boyle County.  As I often do, I went to the local cemetery photos in my records and found several for the Proctor family.  And as with all families, found their story so very interesting.  John W. Proctor was born in Garrard County, September 30, 1829, the son of George Proctor and Nancy Graves.  Both parents died at a very early age, and he is found in the 1850 census of Garrard with his grandfather, William Graves, 82, who was born in Virginia.  John was 21. 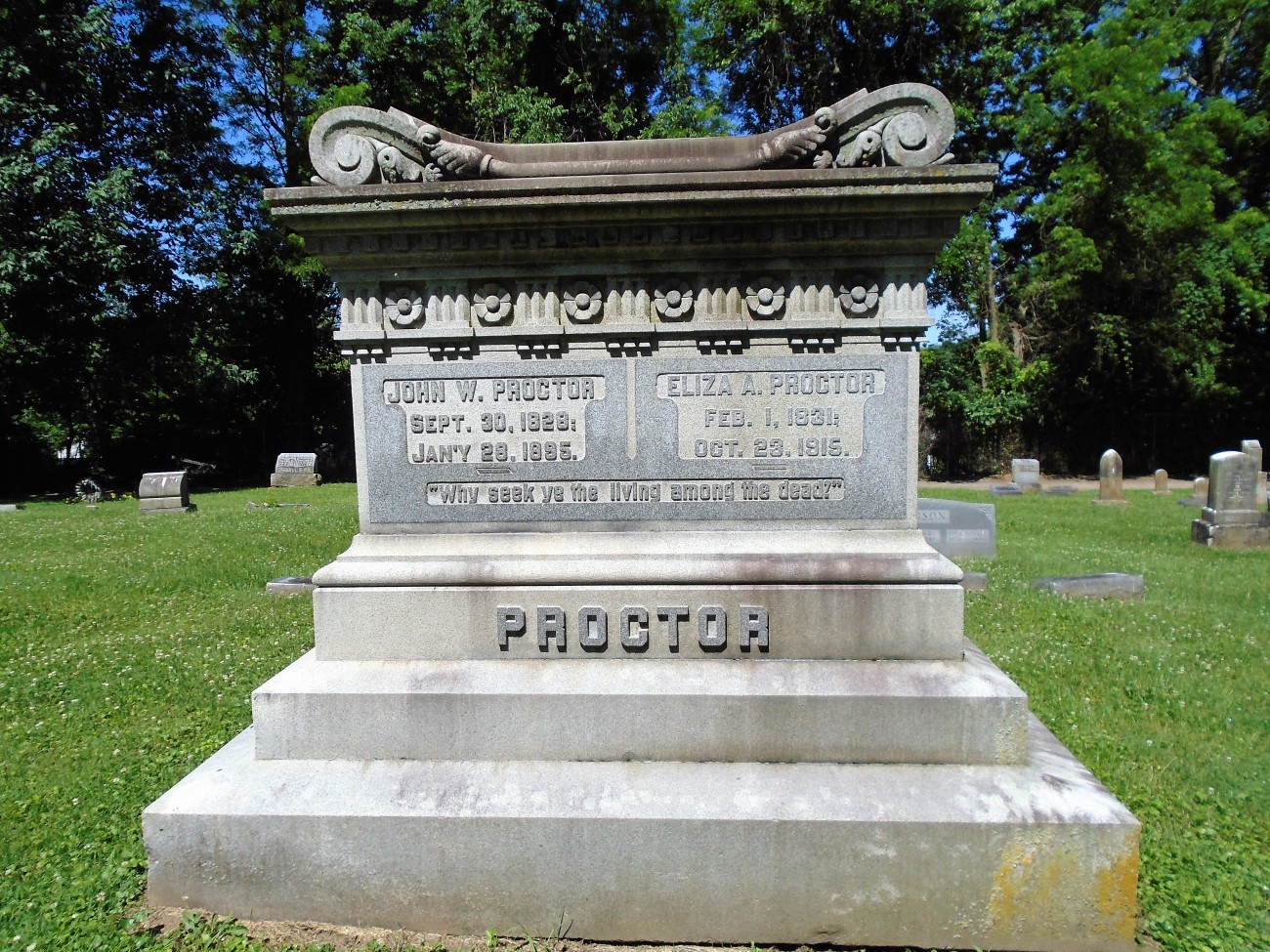 John W. Proctor died January 28, 1895.  His obituary tells so much of his life’s history – becoming a self-made man, a skilled financier and leading citizen of Danville, as well as being a model husband and loving father.

Later in the week we will focus on his son, William Graves Proctor, and his family.

A Self-Made Man, Who Died Possessing the Confidence and Esteem of His Fellow-men

John W. Proctor, brief mention of whose death was made in the last issue of the Advocate, was born in Garrard County, Kentucky, September 30, 1828.  His father was George Proctor, a farmer.  He was educated in the country and village schools, and being brought up on a farm, followed that life until 1858.  In 1859, after a brief experience in the bank at Lancaster, Mr. Proctor was elected cashier of the Deposit Bank at Stanford.

His skill in financiering, his conservative business methods, and his executive abilities soon became recognized beyond the bounds of his home, and in 1864 he was elected cashier of the Central Bank of Kentucky, located in Danville, and one of the leading banking institutions of the State.  He served as cashier of the Central Bank, and its successors – the Central National Bank and the Boyle National Bank – until the time of his death, with the exception of a short time spent as a member of the private banking firm of Tilford, Proctor & Co., at Lexington.

From the time that Mr. Proctor first became identified with the bank here until his death he was looked upon as one of Danville’s leading citizens.  Numerous duties connected with the bank prevented him from taking an active part in many other concerns, but he was consulted in every movement of public interest, and his advice was often looked upon as final.  He was President of the Danville Gas Company, and also connected with several large business enterprises outside of the town.  He had been honored in various ways, and at the time of his death was Treasurer of the Board of Church Extension of the Methodist Episcopal Church, South, and Chairman of the Board of Commissioners of the Kentucky School for the Deaf.  For several years he was Vice President for Kentucky of the American Banker’s Association.  His addresses and work in that body attracted the attention of leading financiers from all over the United States.

In 1859 Mr. Proctor joined the Methodist church, was elected a steward as soon as he was eligible, and filled all the various offices in his church and its conferences to which laymen are eligible.  He was a devout, loyal churchman.  The interests of his church, as well as its teachings, were ever before him.  The church, too, recognized so worthy a son, and honored his fealty.  He was sent as a delegate to more than one General Conference, and held positions on State and national boards.  As Superintendent of the Sunday School he did a great work, and many members of his church, now grown, can say that Mr. Proctor’s counsels and teachings in the Sabbath School kept them in the path of righteousness.  He was rapt up in the Sunday School, and made many sacrifices for its benefit.  At the last Christmas celebration held by the school, Mr. Proctor, then weak and tottering, looked out upon the assembled children with a heart running over with love for them, and as he with much feeling acknowledged a present that had been made as a tribute of the esteem in which he was held by the officers and pupils, the tremor in his voice and the tear in his eye said plainly that he counted that affection and that recognition far above any honor that had been accorded him in the world of business or civil affairs.

Forty-three years ago, Mr. Proctor married Miss Eliza A. Green, of Garrard County.  She, after a happy married life, survives him, with two children – W. G. Proctor, and Mrs. Georgia P. Duncan, of this city.

Mr. Proctor was a man of character and principle.  Born of honorable but humble station, he developed those traits of character that will rise above all conditions, surmount all obstacles, and put the man of merit where he properly belongs.  He was a self-made man in the strictest sense of the term.  In youth, when his fellows were wasting their time, he was pouring over his books, and when he was called upon to take a place in the affairs of the commercial world, he came with a mind stored with useful knowledge.  His success is known to all.

But not only was he successful in the world of business.  He was also a recognized factor in the social world.  Strict and just in business, it was true – his high sense of his duty to his patron and employer, made him necessarily an alert and punctual officer – yet, in matters of man to man, in the relations of human brotherhood, Mr. Proctor was generous, philanthropic and charitable.  Hardly a day passed that some one in trouble did not apply to him for advice, frequently for aid, and few went away unsatisfied.  He was wise and conscientious in his

counsels, careful in his actions, and the very soul of courtesy to all.  It was this indomitable energy and close application to business, coupled with his self-sacrificing interest in the affairs of others, that hastened the end.  He was a most useful man – beloved by his family, honored and esteemed by his neighbors and friends, loved and trusted by the children that gathered about to listen to his teachings on the Sabbath – a Christian gentleman.  What more could be said of any man?  And, “so, turning to the silent and unknown future, he could rely, with just and reasonable confidence, upon that most impressive and momentous assurance ever delivered to the human race – ‘He that believeth in Me, though he were dead, yet shall he live; and whosoever liveth and believeth in Me, shall never die.’”

The funeral was held at the Methodist church this afternoon at half past two o’clock, before one of the largest congregations that has ever assembled in the city.  The banks and business houses had suspended business in honor of the deceased, and many persons came from adjoining towns.  The church was draped in mourning.

Rev. W. F. Taylor, the pastor, assisted by Rev. John R. Deering, of Harrodsburg, conducted the services, which were appropriate and impressive.  The words that were uttered by the ministers treated of the life of Mr. Proctor, his worth as a man and citizen, and his value and service to his church.  The remains were interred in the Danville Cemetery, followed thither by a long procession.  The pall bearers were Messrs. A. W Eastland, C. N. Smith, B. J. Durham, J. H. Otter, J. S. Chrisman, J. S. Roberts.  The honorary pall bearers were Messrs. R. P. Jacobs, Jo. H. Thomas, Richard Gentry, Lee Irvine, Boyle O. Rodes, J. T. Huguely, T. B. Bright, W. L. Caldwell, R. D. Logan, Wallace Green, Nick McDowell, and W. C. Price, all directors of the Boyle Bank.

Eliza A. Green Proctor survived her husband by twenty years, living with son William Graves Proctor and his family.  She last appears in the 1910 Boyle census at the age of 79, the mother of four children with two living.

Mrs. Eliza A. Proctor died at the home of her granddaughter, Mrs. Wood, near Cynthiana, Saturday morning, October 23, in her eighty-fifth year.  She was one of the best known and most loveable women of Danville.  As a friend, benefactress and Christian, she did much for her town.  During the life of her husband, Mr. John W. Proctor, the worthy pair dispensed a most liberal hospitality, and a wide beneficence.  Mrs. Proctor was for about thirty hears a teacher in the Sunday school of the Methodist Episcopal church, and many lives in this community are richer because of the touch of her devoted Christian life.  She had been in failing health for some time, and about ten days ago she had a fall, from the shock and injury of which she never rallied.  She was conscious to the end, recognizing loved ones and friends, and seemed anxious to depart and be at rest.  In the faith by which she had so long lived, she sank to rest as peacefully as the tired laborer falls asleep under the quiet stars.  She had “fought a good fight,” she had “kept the faith,” and in great peace finished her course, and laid down life’s load close by the open gate.  She rests from her labors and her works do follow her.