By Kentucky Kindred Genealogical Research on November 6, 2012 • ( Leave a comment ) 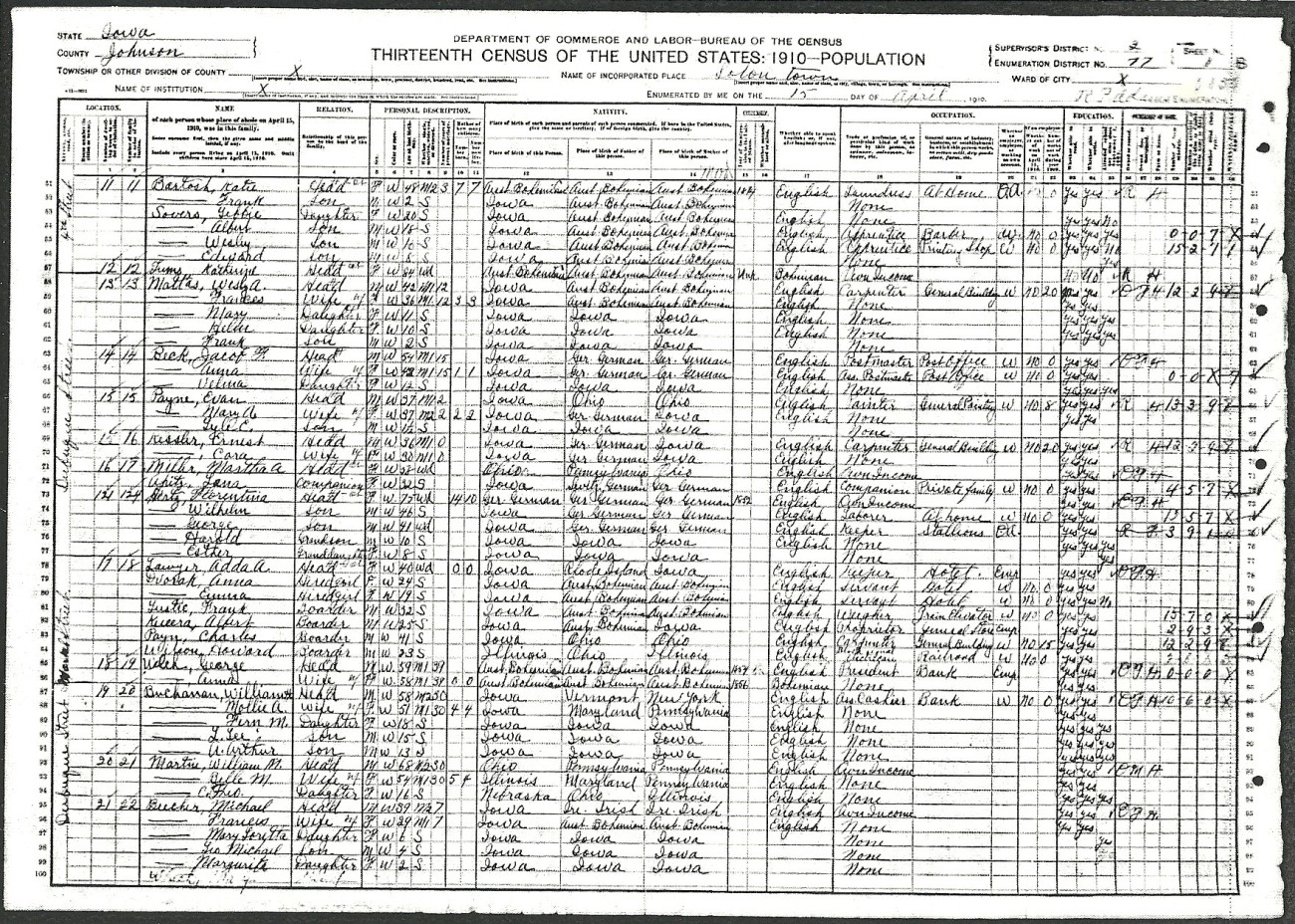 Today I have pulled this census sheet to share with you some interesting facts to look for in any census record.  Ritchey’s grandmother, great-grandfather and great-great-grandmother are listed on this sheet.  The census was taken April 15, 1910, in Solon, Johnson County, Iowa.  Ritchey’s Hertz family had lived in Solon for about 25 years.  His gr-gr-grandmother, Florentine Hertz is listed as head of household.  Henry Hertz, her husband, died in 1904.  Florentine was 75 years old, widowed, born in Germany and both parents were also born there.  Listed under trade or profession was ‘own income’ – evidently she had enough money for her home and needs, money left by her husband.  According to the census she spoke English and could read and write, and that was probably both English and German.  Two sons are living with Florentine – Wilhelm Hertz, who at 46 was still single, and Ritchey’s great-grandfather, George Hertz, who was 41 and  widowed.  Wilhelm is listed as a laborer, but George was a keeper of stallions.  He was a progressive farmer that thought the better stock and bloodlines produced the best horses, cattle and hogs.  His Percheron horses were evidently quite fabulous!  George’s two children, Harold and Esther (Ritchey’s grandmother), also lived in the household.   The family lived on Dubuque Street.

In addition to the personal information for Ritchey’s family, I find this census interesting since almost every husband and wife, or head of household listed, were not born in Iowa.  Most were born either in Germany or Austria.  A few were born in Ohio, Illinois or Nebraska.  Even at this late date you can see the influence of the immigrants that began coming to the mid-west around 1860-1870.  Although most spoke English, a few spoke Bohemian (now known as Czech).

From this list of 13 families there is a laundress, an apprentice barber, an apprentice printer, a postmaster and assistant, a companion, a weigher for a grain elevator, a store proprietor, a hotel keeper and servants, a signal electrician for the railroad, the president of a bank, an assistant cashier for a bank, a painter and three carpenters.  What an assortment of occupations on one street in a small town!

A census record is so much more than just a list of names – it is a window into a world of the past – captured at this one moment in time – to give us a peek into the lives of the people that came before us!  Look at them carefully to find every piece of information you can!