1893 Will of John Franzmann – Jefferson County

By Kentucky Kindred Genealogical Research on October 10, 2018 • ( Leave a comment )

Ritchey and I had a great three-day weekend in Louisville.  Ate lots of great food, shopped, visited the planetarium – and Cave Hill Cemetery.  This cemetery is one of the largest in Louisville, established in 1846.  Filled with history there are many historic figures of the state and county buried here.  In total we spent about five hours over two days and took almost 900 photos.

Today I want to share with you the will of John Franzmann, born in Hesse Darmstat, Germany.  I cannot tell you when John came to the United States, but he met and married his wife, Louisa Loanaberger (Leuenberger) in Pennsylvania, where their two oldest children were born, but had moved to Kentucky by 1849, when their son Adam Adolph Franzmann was born.  Nine children were born to John and Louisa – John, Jr., Philip, Adam Adolph, Franklin, Caroline, Louis, Henry, Louisa and George. 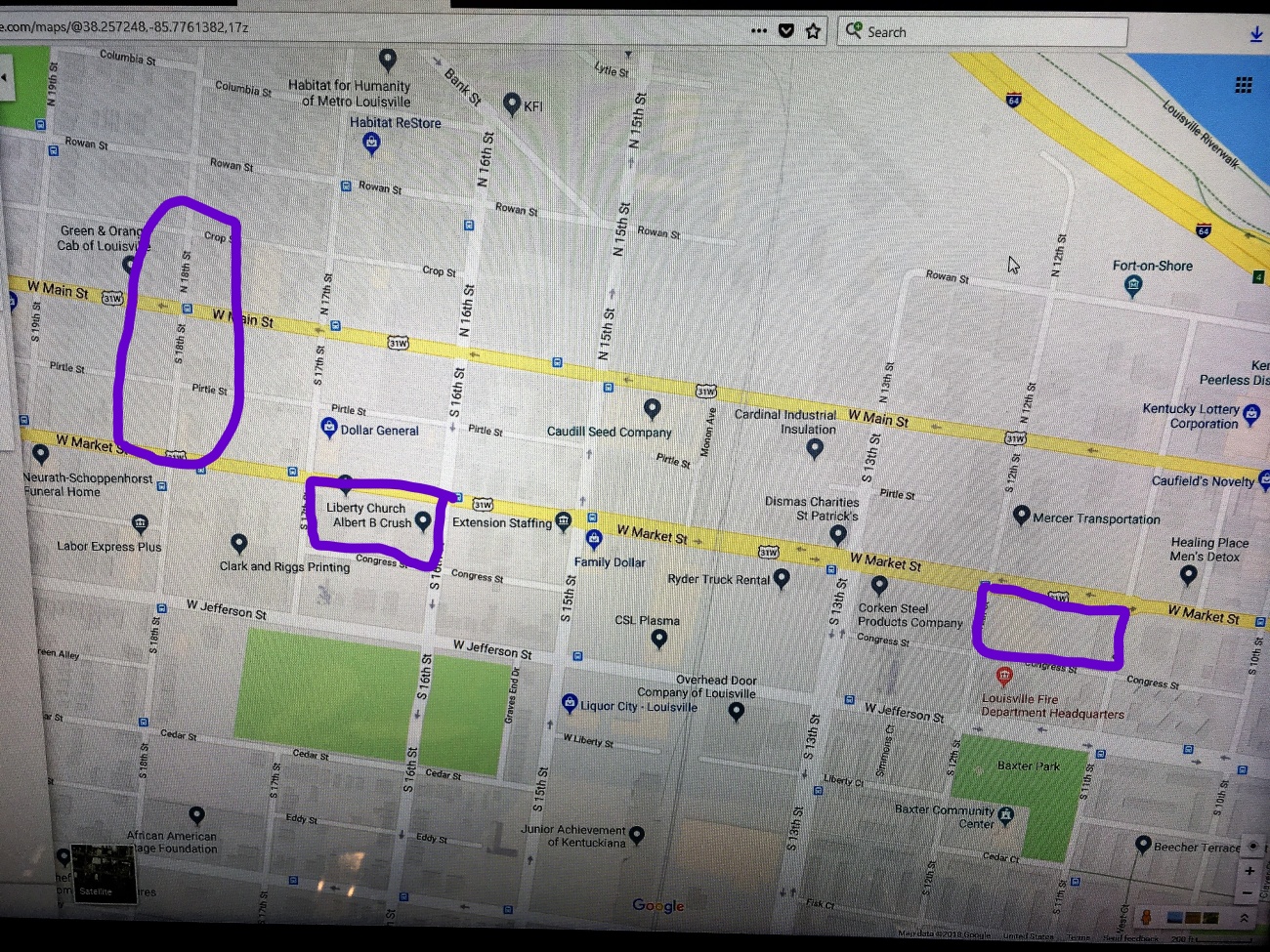 This is a map of part of downtown Louisville, the west side, that shows where the property listed in John Franzmann’s will was located.  This is fairly pricey property today.

Will of John Franzmann

I, the undersigned John Franzmann, of Jefferson County, being of sound mind and memory do hereby make and declare this as my last will and testament, hereby revoking all former wills made.

Item 1.  My farm of thirty- six and one-half (36 ½) acres of land situated on the Eighteenth Street Road near Louisville, shall be divided as follows:

“A” To my son Louis Franzmann, I give and bequeath and devise the northern part of said land on which is situated a brick house with four rooms and frame kitchen and containing twelve (12) acres.

“B” To my son George Franzmann I give and bequeath and devise the twelve and one-half (12 ½) acres of said land and adjoining the property described in “A” on which is situated a large brick house with about eight rooms.

“C” The remained twelve (12) acres of said tract of land I give and bequeath and devise to my son Harry Franzmann. 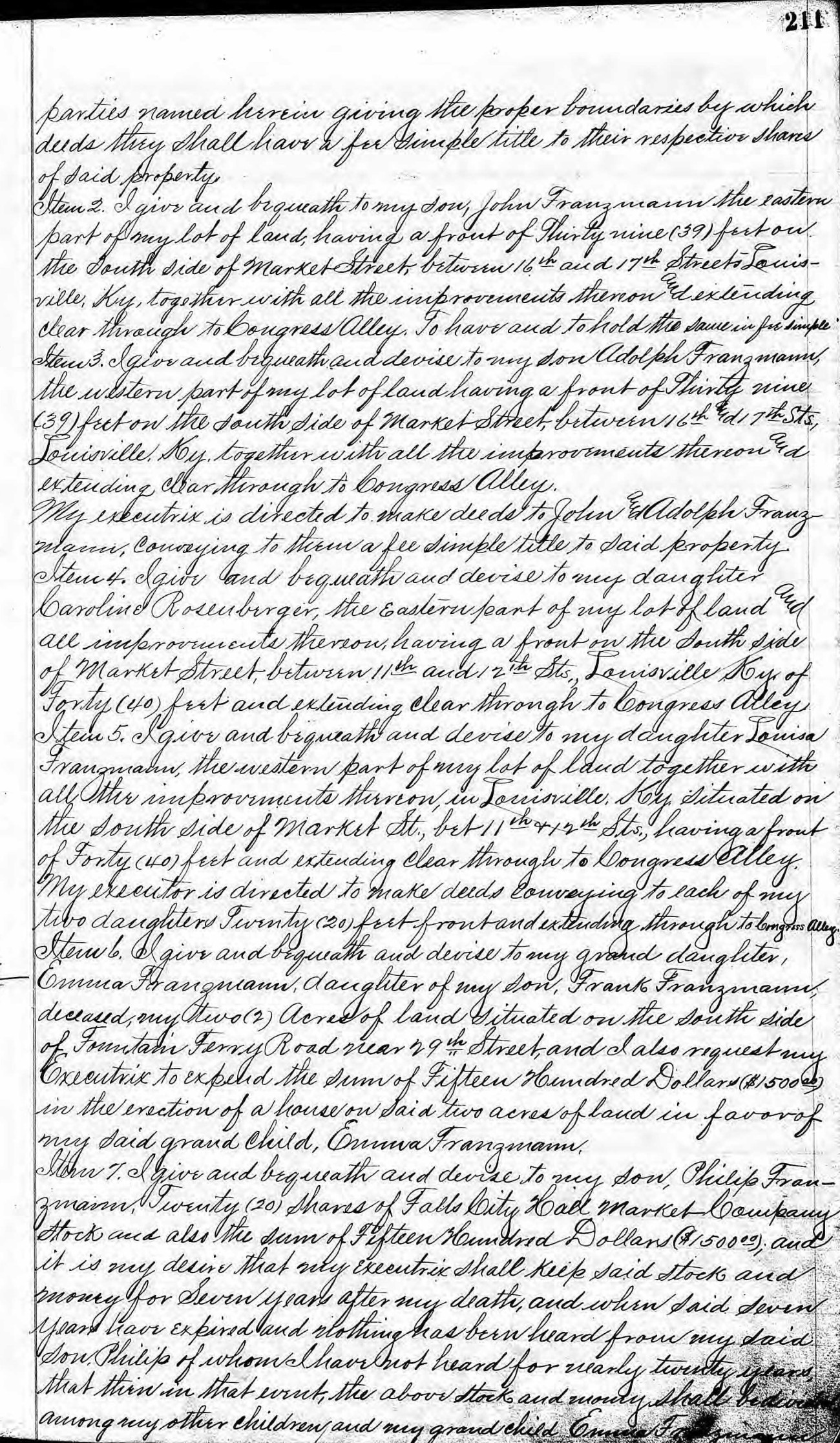 parties named herein giving the proper boundaries by which deeds they shall have a fee simple title to their respective shares of said property.

Item 2.  I give and bequeath to my son, John Franzmann, the eastern part of my lot of land having a front of thirty-nine (39) feet on the south side of Market Street, between 16th and 17th Streets, Louisville, Kentucky, together with all the improvements thereon and extending clear through to Congress Alley.  To have and to hold the same in fee simple.

Item 3.  I give and bequeath and devise to my son Adolph Franzmann the western part of my lot of land having a front of thirty-nine (39) feet on the south side of market Street, between 16th and 17th Streets, Louisville, Kentucky, together with all the improvements thereon and extending clear through to Congress Alley.

My executrix is directed to make deeds to John and Adolph Franzmann, conveying to them a fee simple title to said property.

Item 4.  I give and bequeath and devise to my daughter, Caroline Rosenberger, the eastern part of my lot of land and all improvements thereon having a front on the south side of Market Street, between 11th and 12th Streets, Louisville, Kentucky, of forty (40) feet and extending clear through to Congress Alley.

Item 5.  I give and bequeath and devise to my daughter Louisa Franzmann, the western part of my lot of land together with all the improvements thereon, in Louisville, Kentucky, situated on the south side of Market Street, between 11th and 12th Streets, having a front of forty (40) feet and extending clear through to Congress Alley.

My executor is directed to make deeds conveying to each of my two daughters twenty (20) feet front and extending through to Congress Alley.

Item 6.  I give and bequeath and devise to my granddaughter, Emma Franzmann, daughter of my son Frank Franzmann, deceased, my two (2) acres of land situated on the south side of Fountain Ferry Road near 29thth Street, and I also request my executrix to expend the sum of fifteen hundred dollars ($1500.00) in the erection of a house on said two acres of land in favor of my said grandchild, Emma Franzmann.

Item 7.  I give and bequeath and devise to my son, Philip Franzmann, twenty (20) shares of Falls City Hall Market Company stock and also the sum of fifteen hundred dollars ($1500.00), and it is my desire that my executrix shall keep said stock and money for seven years after my death, and when said seven years have expired and nothing has been heard from my said son Philip, of whom I have not heard for nearly twenty years, that then in that event, the above stock and money shall be divided among my other children and my grandchild, Emma Franzmann.

Item 8.  All the rest and residue of my entire estate of every nature and description and wheresoever situated, I give and bequeath and devise to my wife Louisa Franzmann, with power on her part to dispose of same by will or deed.

Item 9.  I hereby appoint my wife, Louisa Franzmann, as executrix of this my last will and testament and as guardian for my grandchild Emma Franzmann, without requiring bond or security and empower my said executrix to make deeds for the different pieces of property devised to my children and grandchild named herein and the share of my daughters and the share of my grandchild shall be held as their sole and separate estate, free from the claim or control or debts of any husband they or either of them now have or may hereafter have, with power to dispose of same by will or deed as if they were unmarried.

In testimony whereof, I have hereunto set my hand and seal to this my last will and testament this 13th day of March 1893.

Signed and acknowledged by said John Franzmann as his last will and testament in our presence and signed by us as witnesses in his presence and in the presence of each other.

At a County Court held for Jefferson County at the Court House in the City of Louisville on the 22nd day of April 1897, the foregoing instrument of writing purporting to be the last will and testament of John Franzmann, Deceased, late of this County, was produced in Court and prover by the testimony of George L. Everbach, one of the subscribing witnesses thereto, who also proved the attestation of C. M. Lasater, the other subscribing witness thereto, whereupon the same was established by the Court to be the last will and testament of said testator and ordered to be recorded and is recorded in my office as Clerk of said Court.