By Kentucky Kindred Genealogical Research on December 10, 2019 • ( Leave a comment )

From The Reporter, Lexington, Kentucky

Died suddenly in Garrard County, Mr. Nathaniel Scott.  When his death was first discovered, he was lying on his horse, at his own gate, with his feet in the stirrups, and his arms clasped round the horse’s neck.

At his residence near Louisville, Robert Todd, R. S., in the 36th year of his age.  A man, in the various relations of life, of the most unblemished honor, spotless integrity and active benevolence. 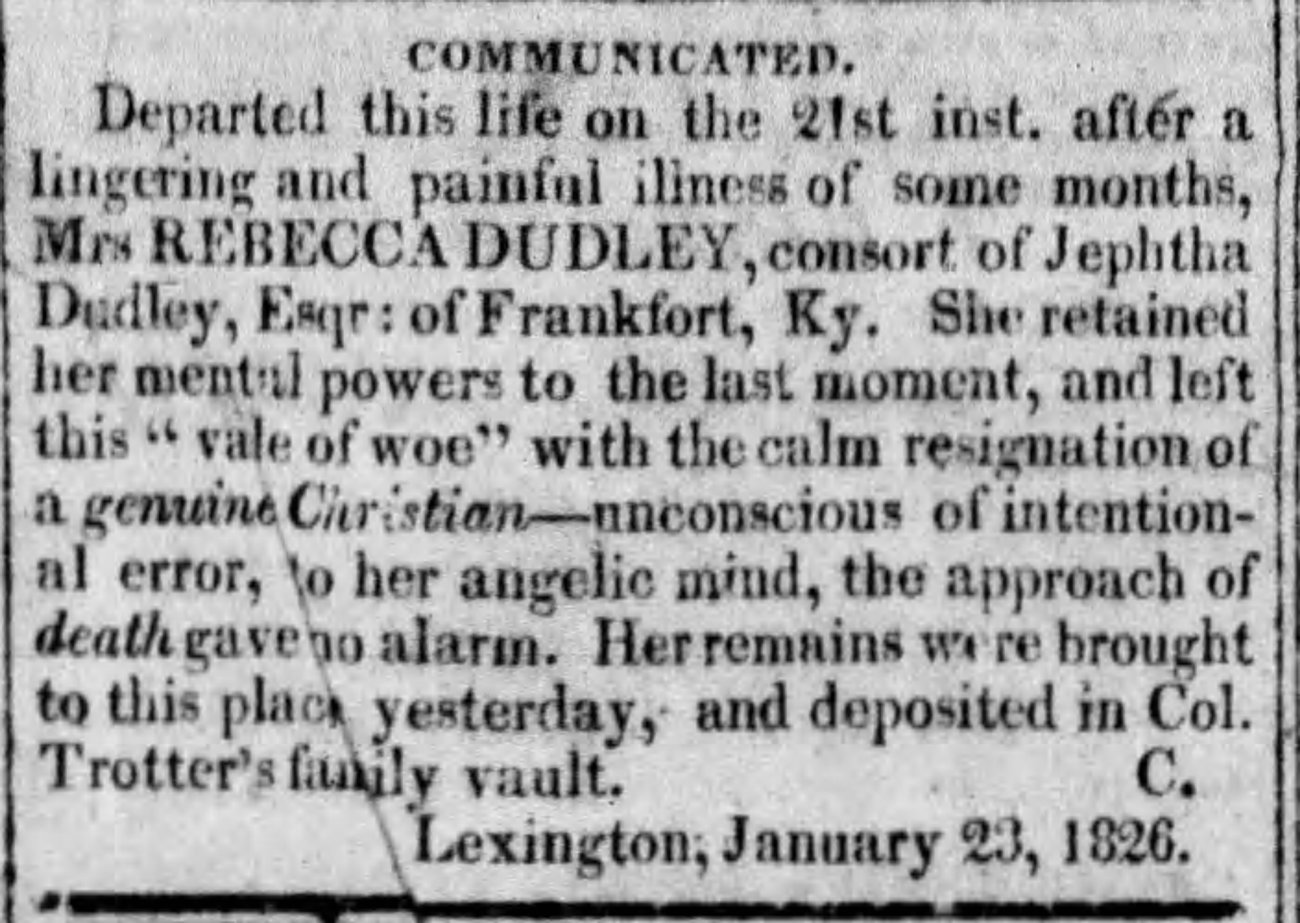 Departed this life on the 21st inst. After a lingering and painful illness of some months, Mrs. Rebecca Dudley, consort of Jephtha Dudley, Esqr: of Frankfort, Ky.  She retained her mental powers to the last moment, and left this ‘vale of woe’ with the calm resignation of a genuine Christian – unconscious of intentional error, to her angelic mind, the approach of death gave no alarm.  Her remains were brought to this place yesterday, and deposited in Col. Trotter’s family vault.

John Shackleford, son of Samuel Shackleford, of Lincoln County.  Murdered at the mouth of Salt River in January, 1826.  1/30

We have just learned that another of the human family has been sent from time to eternity by the hand of a fellow mortal.  A Mr. John Shackleford, son of Samuel Shackleford, Esq., of Lincoln County, was stabbed to death a few days since at the mouth of the Salt River.

Charles C. Sharp, son of Richard Sharp, of Lexington.  Died Feb. 23, 1826.  In an issue of the Argus, Eliza T. Sharp, widow of above, wrote a long letter charging the editor of the constitutional Advocate, P. H. Darby, with instigating and assisting in the murder of her husband, because Darby and Sharp differed in politics.  2/27 and 3/27

Thomas Murphy, merchant of Louisville.  Died on the boat Belvidere on her passage to New Orleans, February, 1826.  He was about 34 years of age.  2/27

At Boston, John Everett, Esq. Attorney at Law, aged 26.  The deceased was distinguished for his literary acquirements and amenity of manners, he has left many friends who knew his worth, and will long cherish his memory with affection and respect.

William Paton, Post Master of Paris, Kentucky.  A native of Virginia and soldier in the Revolution.  Died in February, 1826, aged 71 years.  3/6 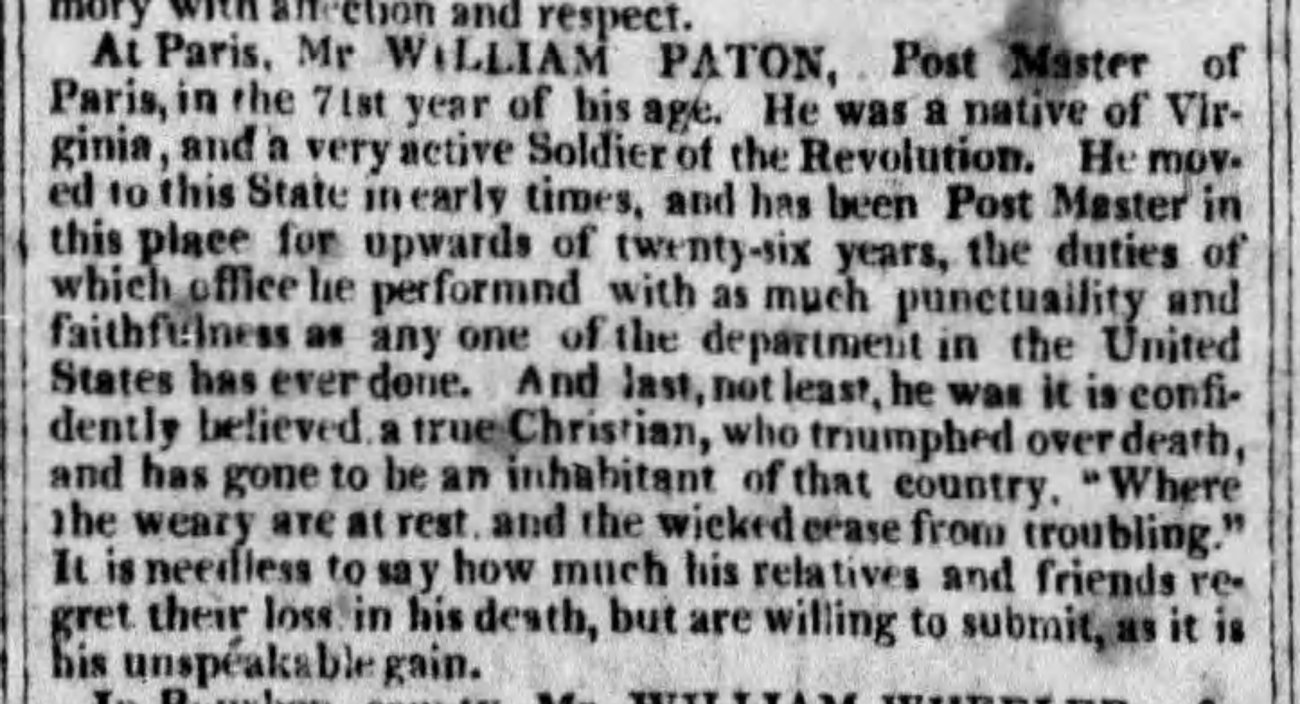 At Paris, Mr. William Paton, Post Master of Paris, in the 71st year of his age.  He was a native of Virginia, and a very active soldier of the Revolution.  He moved to this State in early times and has been Post Master in the place for upwards of twenty-six years, the duties of which office he performed with as much punctuality and faithfulness as any one of the departments in the United States has ever done.  And last, not least, he was it is confidently believed, a true Christian, who triumphed over death, and has gone to be an inhabitant of that country.  “Where the weary are at rest, and the wicked ceased from troubling.”  It is needless to say how much his relatives and friends regret their loss in his death, but are willing to submit, as it is his unspeakable gain.

In Fayette Count, near Athens, on the 22nd, Capt. Richard Bledsoe, of the prevailing influenza which terminated in inflammation of the brain.  Capt. Bledsoe commanding one of the companies of volunteers from this county during the late war, and most faithfully discharged his duty throughout an arduous campaign.

Died – On the 15th of the present inst. Mr. Charles Spillman, at his residence in Garrard County, in the 80th year of his age, and the last of the first settlers in the lower part of the county.  He lived and died a firm and practical believer in the Lord Jesus Christ, and had been a member of the Presbyterian church for more than forty years.  He possessed much of the spirit of true Christian Catholicism.  He was interred amidst a large concourse of people, who had shared his benevolence and witnessed his piety.  ‘Blessed are the dead which die in the Lord.  Yea saith the spirit, that they may rest from their labours and their works do follow them.’

Edward H. Garrard, son of Gen. James Garrard, of Bourbon County.  Died in April, 1826, aged 18 years.  He was a member of the Senior Class of the Union Philosophical society at Transylvania University.  5/1

William Humphries, son of Charles Humphries.  Died Thursday June 1, 1826, aged 19 years.  He was a member of the Senior Class and the Transylvania Whig Society at Transylvania University.  6/5

Died in this town on Saturday last, at the residence of Maj. W. T. Barry, his venerable father, John Barry, Esq., in the 84th year of his age.  He was a soldier of the Revolution – esteemed by all his acquaintances as an honest man, preserving through a long and active life an unsullied reputation.