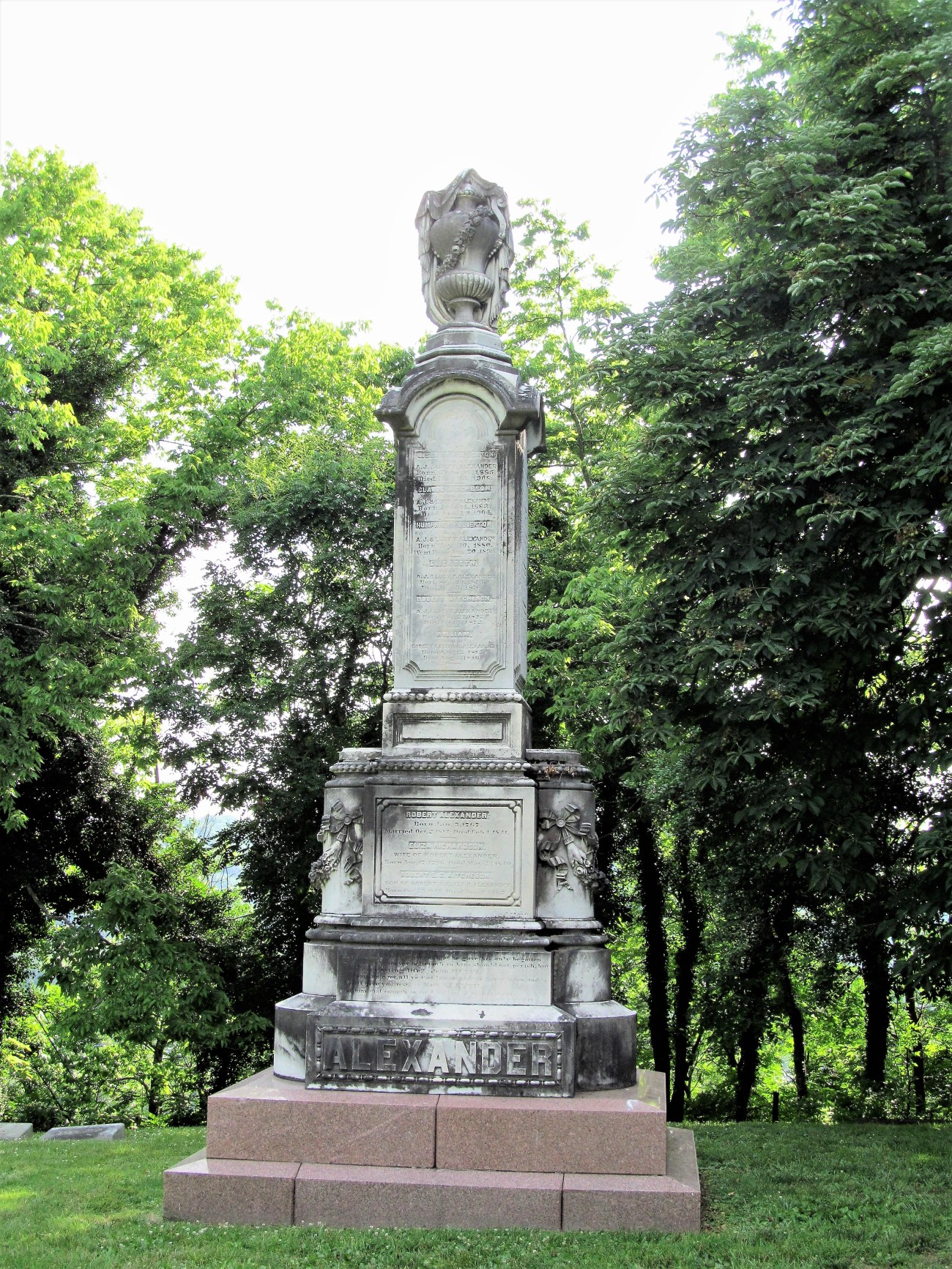 The family of Robert Alexander is buried in the Frankfort Cemetery in Franklin County.  The huge monument is representative of three generations.  A large, draped urn sits at the very top, with two ornately carved sides.  The best part – there is so much information included on this stone!

A little background.  Robert Alexander was the son of Scottish merchant and banker, William Alexander, and his wife, Christian Aitcheson.  Robert was born in Scotland but raised in Paris, France, and became secretary to American diplomat, Benjamin Franklin, in 1782, when just fifteen years of age.  He was encouraged by Franklin to come to the United States and by 1790 Robert had purchased 2,000 acres of land on Elkhorn Creek in Woodford County from Gen. Hugh Mercer.  In nearby Frankfort he was president of the Bank of Kentucky from 1807 to 1820.  On October 2, 1814, Robert Alexander married Elizabeth Richardson Weisiger, daughter of Daniel and Lucy Price Weisiger.  Daniel Weisiger was a tavern keeper – Weisiger’s Tavern was well known during the early days of the state and for many years afterwards.

Robert and Eliza’s information are on this portion of the gravestone, as well as son Robert’s.  Robert S. C. A. Alexander was a life-long bachelor.  The following article from the November 22, 1867, issue of The Courier Journal gives a wonderful description:

‘On the Louisville and Lexington Railroad, between the towns of Frankfort and Lexington, is a depot and a few houses, dignified by the name of Spring Station.  The county is Woodford, one of the richest in Kentucky, and far-famed as a grazing district.  A drive of a mile and a quarter from the railway station, through the blue grass region, brings us to an old-fashioned house, partly brick and partly frame.  If the time is summer, and near the evening hour, we are met by a small man on the green lawn in front of the quaint building, who extends his hand in token of welcome.  The forehead is high, the hair thin and of a hue approaching light brown.  The eyes are blue, the complexion fair and the face a compromise between the humorous and the grave.  The light whiskers give a fullness to the cheeks, and the plain, neat fitting dress makes the figure appear smaller and more Quaker-like in the subdued sunlight of evening.  The black felt hat is pushed back from his brow, and consequently, no shadow comes between us and his face.  The step is light, and the movement of the body easy and graceful.  There are lines of care upon the forehead, and the man, we should judge, is forty-five years of age.  Everything about him is plain to simplicity, and there is nothing austere in his bearing.  From the lawn in front of the old house we gaze out upon a magnificent estate.  There are five thousand acres of woodland and blue grass meadow, and over the broad domain graze cattle, horses and sheep of purest blood.  The estate is Woodburn, the largest breeding establishment in the world, and the small man with fair complexion and kindly smile the proprietor of it all – Robert Aitcheson Alexander, or, as he is known in Scotland, Sir Robert A. Alexander, Bart.  His parents were Scotch, but emigrating to this country they settled in Woodford County, Kentucky, and in the quaint farm building our host was born, and as a happy child he played upon the green lawn.

Then thirteen years of age he was invited to Scotland by his uncle, who had him educated at the best institutions of learning in England.  He graduated at Cambridge, Charles Astor Bristed being one of his classmates at this college.  On the death of his uncle he inherited, with his title, a vast landed property in Scotland, the Adrie iron Works, which he still holds, and from which he derives a large yearly revenue.  When his parents died, and young Robert became the master of Woodburn, the estate was much smaller than it is now.’

‘Cheered by the kindly welcome on the lawn, we pass into the house . . . Mr. Alexander is a bachelor, living quietly and secluded.  A mulatoo woman who nursed him when a child, who has grown old in growing from slavery into freedom, is his house-keeper . . . The rooms, though not gaudy, are furnished with elegance, and there is nothing of the orderless character to betray the bachelor principle.’

‘Woodburn is famed far and near for its hospitality, and scarcely a day passes without a number of guests being entertained by the host.  Ladies as well as gentlemen cross the threshold of the quaint mansion, and about once every year Mr. Alexander gives an elegant party, and then there is life and jollity in the old house.  From the surrounding country, Lexington, Frankfort, Louisville, Cincinnati, and other places, are gathered the rarest flowers of beauty and culture, and at such times the quiet business man is transformed into the polished, dignified gentleman.  He moves about the rooms through the well-dressed throng, exchanging warm greetings, and then his homely face is rendered attractive by the smile of pleasure.  It reflects the happiness around him, but abstracts a charm from each star in the galaxy of beauty to weave into a halo of radiance, and he becomes the gem setting of his own handiwork.  Mr. Alexander spends much of his time at Woodburn.  His correspondence is large, and he devotes about two hours to it every day.’

‘It is a princely domain, and the small, plainly dressed, kindly smiling man by our side is the lord and master of all; and it is not surprising that he should prefer the quaint old house, the green lawn, and the broad acres of Woodburn, with flocks, droves and herds grazing thereon, to the baronial estate in Scotland.’

Nine days later Robert Spreul Crawford Aitcheson Alexander passed away at the young age of 48.  How wonderful to have this vivid description of him and Woodburn farm.

Three children were born to the couple – David, Mary and Robert.  Lucy Caroline Humphreys Alexander passed away at the young age of 25 in September of 1858.  The three children followed her to the grave, Robert in 1859, and Mary and David in 1860.  Alexander must have been devastated.

October 6, 1871, Alexander married Lucy Mary Fullerton in Ross County, Ohio.  The couple were married 31 years and had eight children – Robert, Elizabeth Fullerton, Alexander John Aitcheson, Lucy Fullerton, Humphrey, Claude Aitcheson, Joseph Scott and Kenneth Deedes.  Most of children in this family died at a young age – five dying before the age of 23.  Dr. Alexander John Alexander lived to be 54; Lucy Fullerton, 51; and Kenneth Deedes, 47.  These three lived longer than their siblings, but still not to an old age.

A. J. Alexander died this morning at 4 o’clock at his home on the noted stock farm Woodburn in Woodford County. He was seventy-eight years of age. The cause of his death was heart disease.

Mr. Alexander was the most widely-known breeder of trotting and running horses in America, and the wealthiest Kentuckian ever engaged in stock raising.  In addition to Woodburn, he owned over $1,000,000 worth of real estate in Chicago, vast possessions in and around St. Augustine, Florida, and large interests in Scotland.

He was the son of Robert Alexander, whose parents resided at St. Germaine, near Paris, France.  Benjamin Franklin induced the elder Alexander to come to America.  He landed first in Pennsylvania, but soon came to Kentucky and purchased Woodburn early in the present century of the heirs of Gen. Hugh Mercer, of Revolutionary fame.  He never became a naturalized American citizen.  The estate, when it came into the hands of A. J. Alexander, had grown to enormous proportions, since by the death of an uncle, Sir William Alexander, at one time Chancellor of the Exchequer, he inherited vast possessions in Scotland, which, while although entailed, bring in enormous revenue.  Woodburn was made the greatest breeding plant in the United States.  Some of the greatest performers of both the running and trotting turf have come from Woodburn farm under the supervision of Mr. Alexander.  The place has long enjoyed national fame.

Several years ago Mr. Alexander, owing to ill health, sold out his thoroughbreds, and of recent years he had discontinued breeding trotters.  The only blooded livestock to be found at Woodburn now are his great herd of short-horned cattle and a flock of pedigreed sheep.  For years the cattle at Woodburn were as valuable as were the horses, and during the boom times he paid as high as $26,500 for a bull and $30,000 for a cow.

Mr. Alexander never raced his horses.  He sold his thoroughbreds annually at auction and his trotters at private sale.  He was a member of the Presbyterian Church and gave lavishly to charity.  He also subscribed liberally to various educational institutions.

Lucy Fullerton Alexander lived for another seven years before passing away October 7, 1909, at the age of 64.

The life of Mrs. Lucy M. Alexander, which had been filled with good works, came to a sudden end here this evening at 7 o’clock.  Mrs. Alexander had been ill at her home near Spring Station for several weeks, but the immediate cause of death was a swift attack of angina pectoris.  The death of Mrs. Alexander will come as a shock to many persons, not only in Kentucky, but in many sections of the country where she was known and beloved.

Mrs. Alexander was the widow of the late A. J. Alexander.  She was born in Chillicothe, Ohio, but had spent the greater part of her life among the people of Woodford County, having come here as a young bride.  During her long residence here, Mrs. Alexander was the author of many private and public benefactions, and her quiet work amongst the poor from time to time relieved much suffering.  The latest important gift known to the public was a contribution of $15,000 to the Versailles hospital.

Beloved by the entire population of this county, as well as by numerous friends throughout Kentucky, Mrs. Alexander never overlooked an opportunity to shed some of the sweetness of her nature over any person in trouble or sorrow of any sort.  The nobleness of her mind was constantly in evidence in her intercourse with those about her, and a gap is caused by her death in the social and religious life of the community that her friends consider irreparable.

Besides the many friends who mourn her, Mrs. Alexander leaves two sons and one daughter, Dr. A. J. A. Alexander, Kenneth Alexander and Mrs. William B. Simms.  Three sisters, Mrs. Mary Stillwell, of Chicago; Mrs. Sallie F. Carter, of Woodford County and Miss Madge Fullerton, survive.

Mrs. Alexander’s body will be interred at Frankfort, the funeral having been arranged for Saturday.  Services will be held here in order to allow the hosts of friends to partake of the last rites in honor of the beloved dead, and also in Frankfort, preceding the interment.