1704 and 1713 Wills of George and Eliabeth Brett – Charles County, Maryland

By Kentucky Kindred Genealogical Research on June 12, 2020 • ( Leave a comment )

George Brett, 1650-1705, was the son of William Brett, Jr., and Margaret Ford.  He married Elizabeth Godshall Hanson, 1653-1713.  After George Brett’s death Elizabeth married a Mr. Booker.  Her will was written June 20, 1713, and probated 19 days later.  Children Susannah Noble, Henry Brett, Mary Hewlett, William Brett, George Brett, Richard Brett, and Martha Barker are listed in George Brett’s will.  These children were also listed in Elizabeth’s will – the exception Mary’s last name was Gray – and daughter Margaret Dunnington was also listed.  Margaret was the name of George Brett’s mother, so she must have been his daughter, but why wasn’t she mentioned in his will?  Was this just a coincidence?  Margaret was born in 1674, the eldest child – was she Elizabeth’s child by a previous marriage?  Notice the Hanson’s that witnessed George Brett’s will – probably relatives of his wife.

Will of George Brett

In the name of God, Amen.  I, George Brett, of Charles County in the province of Maryland, being sick and weak of body, but of perfect sense and memory (blessed be God) 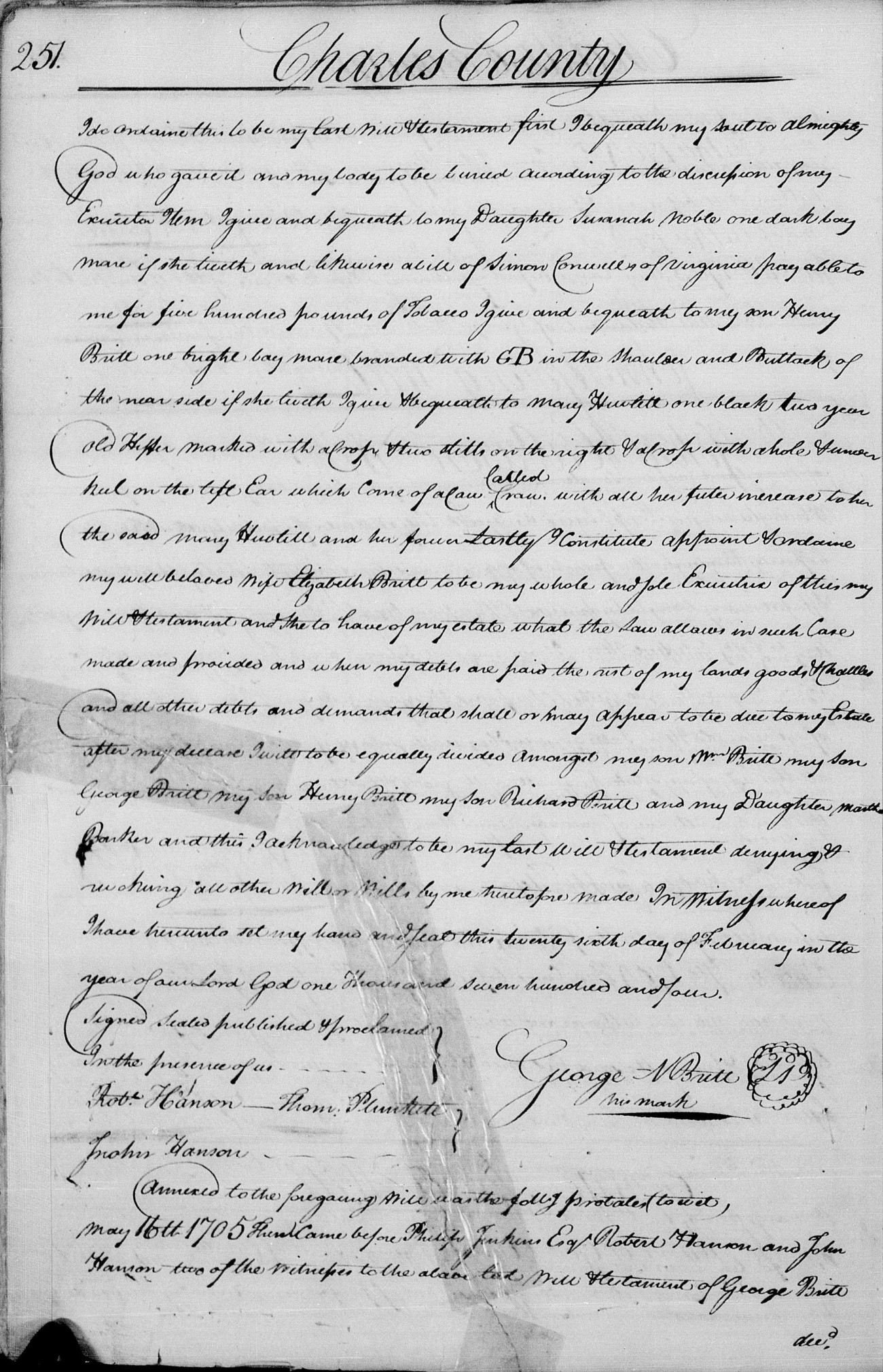 I do ordain this to be my last will and testament.  First.  I bequeath my soul to Almighty God who gave it and my body to be buried according to the discretion of my executor.

Lastly I constitute, appoint and ordain my well-beloved wife, Mary Brett, to be my whole and sole Executrix of this my will and testament, and she to have of my estate what the law allows in such case, made and proved and when my debts are paid the rest of my lands, goods and chattels and all other debts and demands that shall or may appear to be due to my estate after my decease, I will to be equally divided amongst my son William Brett, my son George Brett, my son Henry Brett, my son Richard Brett and my daughter, Martha Barker and this I acknowledge to be my last will and testament, denying and revoking all other will or wills by me theretofore made.  In witness whereof I have hereunto set my hand and seal this twenty-sixth day of February in the year of our Lord God one thousand and seven hundred and four.

Signed, sealed, published and proclaimed in the presence of us – Robert Hanson, Thomas Plunkett, John Hanson

Annexed to the foregoing will was the following probate (to wit)

May 16th 1705 Then came before Philip Jenkins, Esq., Robert Hanson and John Hanson, two of the witnesses to the above last will and testament of George Brett

Deceased and proved the same in common form as by the said Philip Jenkins, Esq. was attested to me under his hand the day and year above said.

June 8th 1705.  Then came before me Thomas Plunkett, one of the witnesses to the above last will and testament of George Brett, deceased, and proved the same in common form.

June the 20th day 1713.  In the name of God, Amen.  I, Elizabeth Booker, of Nanjemy, Charles County, in the province of Maryland, being sick and weak in body but of sound mind and memory, blessed be God for the same, and calling to mind that all things in this world are uncertain, but death which most certain to come but most uncertain when, do make and ordain this my last will and testament in manner and form following.  I bequeath my soul into the hands of Almighty God that gave it, hoping through the merits and interception of Jesus Christ, my blessed Savior and Redeemer, he will receive it at the last day into the arms of his mercy with a full pardon of all my sins, my body to the earth to which it belongs, to be decently buried at the discretion of my executors hereafter named.  My worldly goods I dispose of as followeth.  Viz.

Signed, sealed and delivered in the presence of us, Daniel Harper, Mary Harper

On the back of the foregoing will was endorsed the following probate and relinquishment (to wit) Charles County June the 9th 1713.  Then came Mary Harper and made oath on the holy Evangelist that the within mentioned instrument in writing was published, pronounced and declared by Elizabeth Booker, the within testator, to be her last will and testament and that Daniel Harper who was also and evidence was then present and signed to the same publication.  Sworn before me, Joseph Manning, Dep Com Carol Comit

July the 9th 1713.  Then came Henry Brett, one of the executors assigned by the testator and relinquished and renounced his right to the same.  Joseph Manning Dep Com Carol Comit