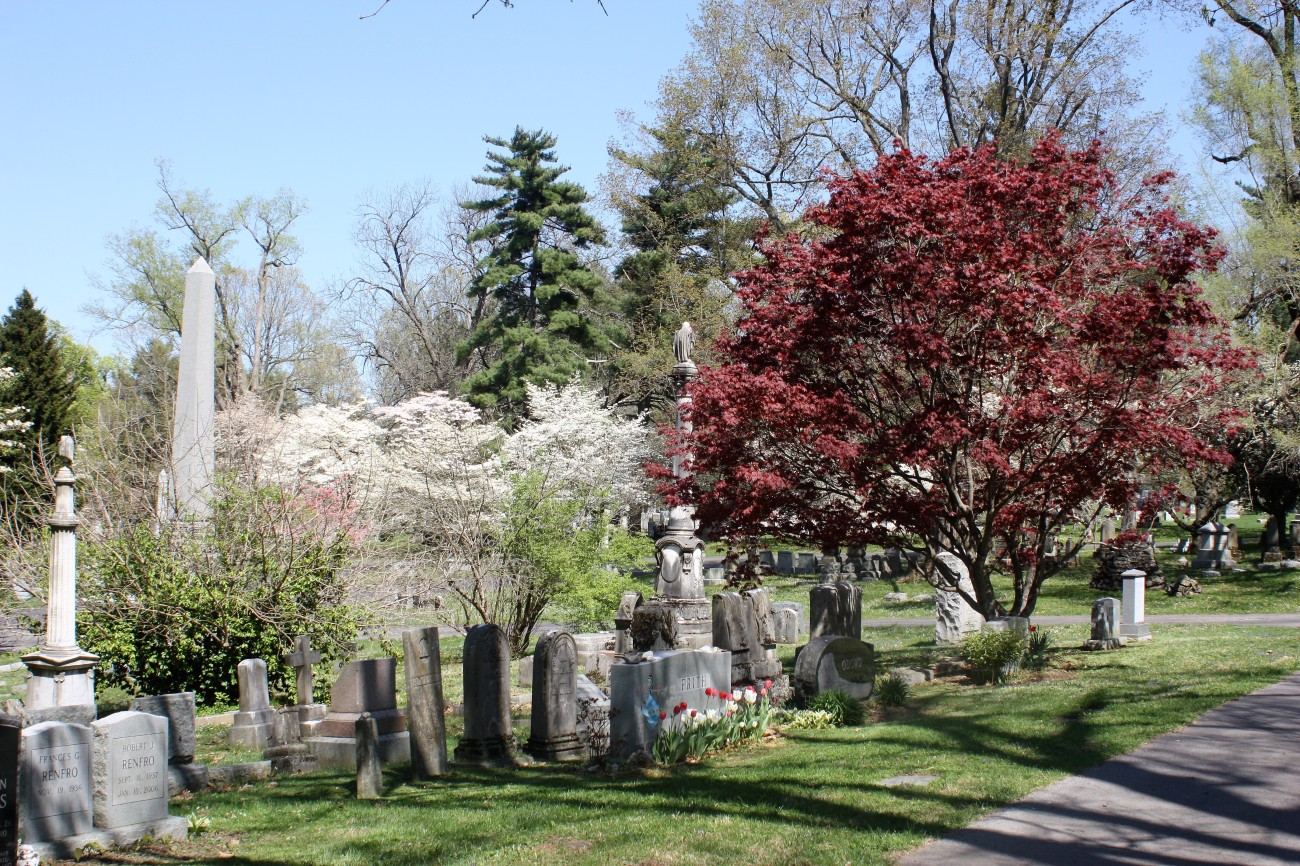 Several times Ritchey and I visited the beautiful Lexington Cemetery in Fayette County.  Gorgeous stones, trees, a pond and landscaping make the cemetery a serene place to walk – as well as searching for lost relatives. 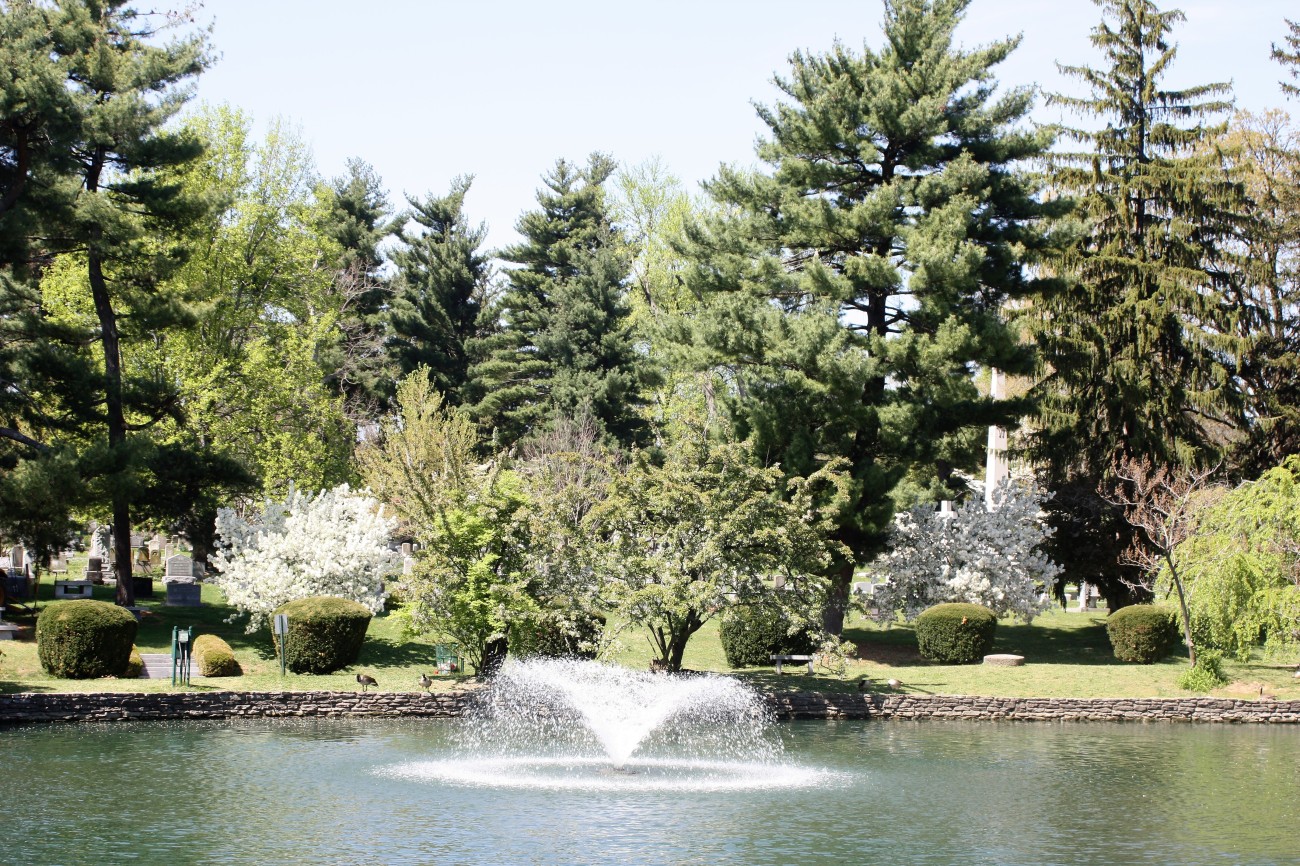 The first burial in the cemetery was that of Robert Boyd in 1849.  Lexington citizens realized the need for a city cemetery.  First Hill, a burial ground for Lexington’s early pioneers had few spaces left and was not maintained properly.  The old Maxwell cemetery had been desecrated by the town workhouse and the poorhouse; many of its graves had been dug up.  The Episcopal Cemetery was small, as was the Catholic cemetery, with most plots already sold.  Family graveyards on farms came with the realization that the land would not always be in family hands, and those graveyards were not cared for by the new owners – we’ve all experienced this.

In the 1840’s when the need for a new cemetery became greatest, a charter was created to establish a rural, garden cemetery.  At that time the new cemetery was outside city limits, but with the growth of 225 years it is now surrounded by the city.  Twenty-four men pledged $500 each to purchase forty acres of land and provide care for the new cemetery.  $7,000 was used for the land, a heavily forested area that had been used as hunting grounds.  Boswell’s Wood, as it was known, contained a small family graveyard at the time.  These graves are preserved as part of Section A.  In early 1849 the grounds began to be laid out, with roads, sections and lots.

The first lot was purchase by A. B. Colwell, a community businessman, who bought the lot for Robert S. Boyd, a merchant tailor and Colwell’s partner.  Cholera was rampant in the state during the summer of 1849, and Boyd died of the disease June 16.  Robert Boyd was buried in the Episcopal Cemetery and was re-interred in the new Lexington Cemetery October 2.

23 May 1849 – Cholera broke out at the Lunatic Asylum in Lexington on Saturday last.  We received the following dispatch from the editor of the Atlas at 1 o’clock:

‘Ten cases of Cholera at the Asylum up to the time – in all 4 deaths.  None others considered dangerous but one, and hope’s entertained of him.

We understand that the disease has been thus far confined to the Asylum.

21 Jun 1849 – Cholera – We were told by one of our first physicians, last evening, that there had been nine deaths of cholera during the preceding twenty-four hours The Lexington Observer of yesterday says:

There have been a few cases of cholera at the lunatic asylum and two or three deaths.  We learn that there were no new cases yesterday and that all the old cases were doing well.

We have heard of a few scattering cases of cholera in the city, and some two or three deaths in all.  The general health of this county and the surrounding counties is considered very good for the season.

Since our paper of Saturday, the cholera has increased both in the number and violence of its attacks in our city, and on Saturday, Sunday and Monday particularly, it seemed to have acquire additional force and raged with far more intensity and fatality than it had before.

The deaths from cholera that have occurred in our city since Saturday morning are at 19 in number, thus making, with the five deaths heretofore noticed, twenty-four in all since the first fatal case took place in Lexington.

We will remark that there has been a pretty general predisposition to the disease among our citizens, and a great many cases of diarrhea attended sometimes with vomiting and cramps, have occurred, but the great mass of these cases have yielded readily to medical treatment and the patients have been relieved.  Indeed, we do not hesitate to state as our deliberate opinion, founded upon the best information, that not a single case has occurred, followed by a fatal termination, in which inexcusable imprudence or neglect may not be readily traced.

Among the person attacked who were recovering or thought to be so, are Mr. Joseph Beard, Capt. O. H. P. Beard, Mr. Joseph Lankaart, Dr. Holland, Mr. W. H. Rainy.

28 Jun 1849 – The Lexington Observer, of yesterday, reports five deaths of cholera in that city since Saturday – three negroes and two whites; the latter were a son of Mr. David K. Brisby and an old laboring man named James Baird.

03 Jul 1849 – Cholera in Lexington – By private advices we regret to learn that the cholera is on the increase at Lexington.  Much alarm is beginning to be experienced in that city on account of several recent cases.  Mrs. Huggins, wife of Thomas Huggins, Esq., was attacked on Sunday night and died yesterday morning.  Mr. Joseph Winter was attacked the same day and died about the same time.

09 Jul 1849 – Lexington – The cholera has been raging with increased violence at this place during the past week.  It attacks indiscriminately, and does not appear to yield as readily as heretofore to medical treatment.  The citizens are greatly alarmed and numbers of them are hurrying away from the place.

11 Jul 1849 – The cholera at Lexington, we learn, is not materially abating – though not so fatal as in the early part of last week.

25 Jul 1849 – Last Saturday there were two deaths from cholera at Lexington.  Sunday one death, no new cases.  The Lexington Atlas thinks there have been a greater number of cases of cholera in that city this season than there were in 1833.

31 Jul 1849 – The Cholera at Lexington.  We regret to hear that the cholera has again broken out at Lexington with increased violence.  A private dispatch received from there yesterday morning state that the cholera was worse than ever, and that there had been 30 deaths since Saturday.  A second dispatch received at noon states that up to that time there had been 35 deaths since Saturday.

A letter to a gentleman here states that “the principal sickness and deaths at present are in Comb’s row, bounded by Limestone, Constitution and Winchester Streets, quite in an opposite part of the town from where the disease was two weeks ago.  We have had for several days wet weather.  On Thursday and Friday nights we had heavy rains with a strong East wind, accompanied with a good deal of thunder.”

01 Aug 1849 – The cholera at Lexington is again abating.  We learn by a private dispatch that there were but six deaths during the 24 hours ending on yesterday morning.

Collin’s History of Kentucky lists the cholera deaths of Lexington as 14 in May, 33 in June, 217 in July and 73 in August, for a total of 337.  Many were probably buried in the new Lexington Cemetery. 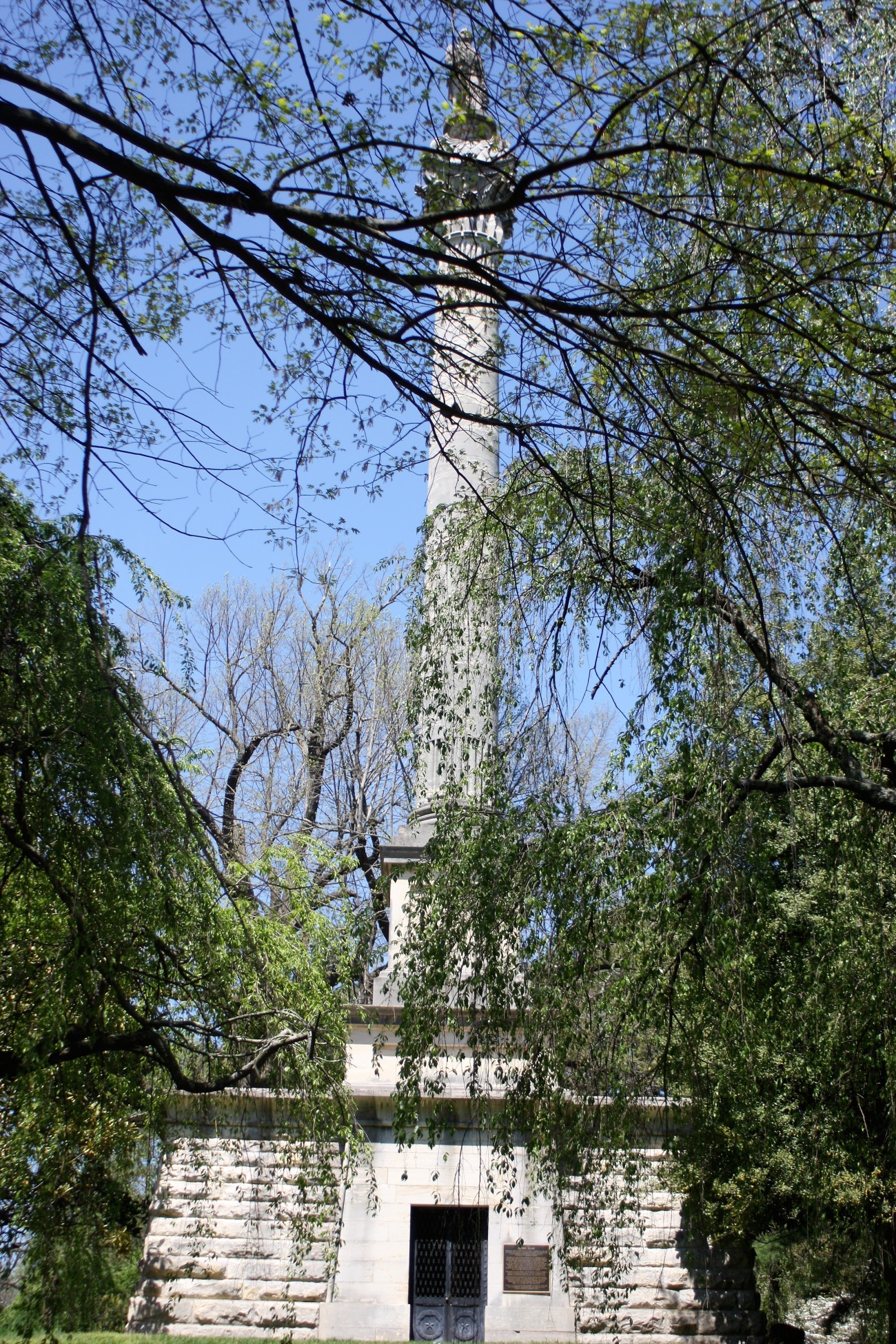