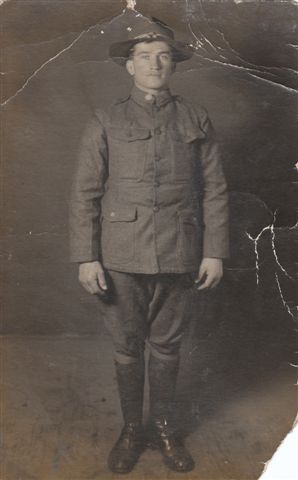 Frederick A. Klein – grand uncle (or great-uncle!) of my husband – was a soldier during World War I.  He was 25 years of age when he signed his registration card on June 5, 1917, and entered service on September 22 of the same year.  His registration card lists him as short, medium build, with blue eyes and brown hair.  When he entered the service he began his duty as a dishwasher – until the head cook gave him an opportunity to learn to cook – and that was his job for the duration of his war service.

Fred was born in Callaway, Nebraska, on September 17, 1892, the son of George Klein (a German immigrant) and Caroline Jungbluth (whose parents came from Germany).  He was a theological student at Faith Home Missionary School in Tabor, Iowa.  Fred had 8 brothers and sisters.  Louis H. was the oldest child, born May 9, 1883, while the family lived in Wisconsin.  Anna C. was also born in Wisconsin on July 12, 1885.  The family moved to Nebraska, living in a sod house.

After the war Fred met and fell in love with Fannie Yates.  They were married at her parents home near Hamburg, Iowa, August 2, 1922.