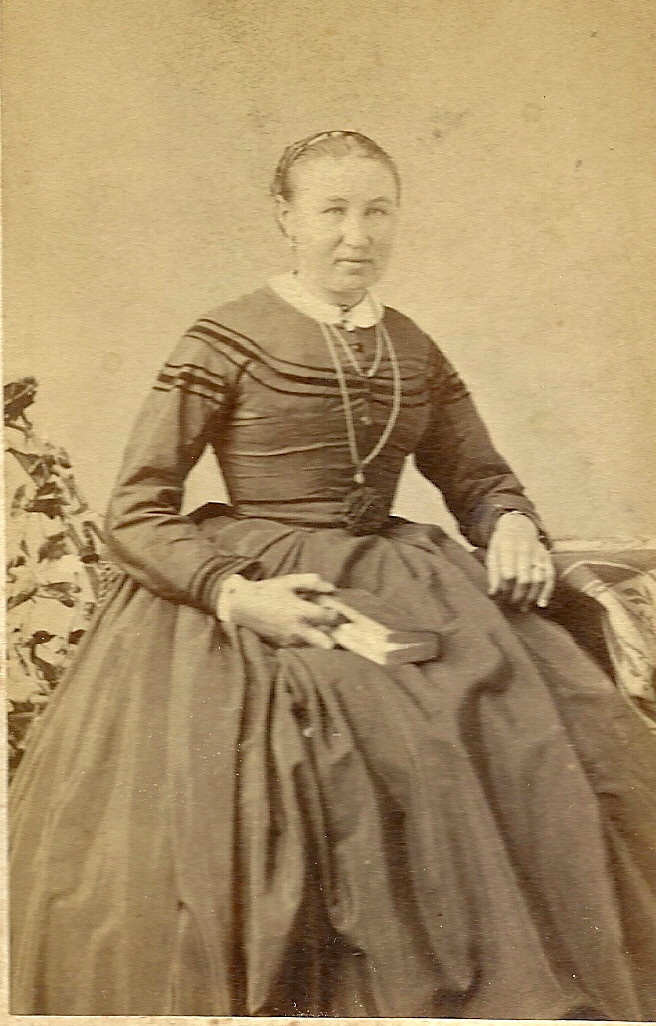 This is a lovely example of an early 1860’s Civil War fashion.  The skirt is huge – with a high waist and very full at the waistline.  By the mid 1860’s the waist was a bit lower and not as full, the material slim at the waist, with the full material billowing down to the feet – or sometimes gored, with an A shape gore in the center, with a generous gore at either side, with a straight length pleated at the back, according to Joan Severa in Dressed for the Photographer.  The plain hairstyle is also indicative of the early years of the period.

This woman wears a hair band and several pieces of pretty jewelry – necklaces and a ring on her right hand.  Her bodice and sleeves are decorated with soutache braid, common for the period, and still used today.

The photo was taken by Samuel Montague Fassett, whose photography shop was located at 114 South Clark Street in Chicago.  Just a bit of research on Mr. Fassett gave some great information!  He was one of the early photographers of Chicago, who started their shops in the 1850’s and 1860’s.  Along with Edwin Brand, John Carbutt, Alexander Hesler, C. D. Mosher and others, Samuel gave the public the opportunity to have their portrait made into carte-de-visite’s at a reasonable price.  These early photographers also produced outdoor views of the city that were quite popular.

One very interesting note on Mr. Fassett – he took a photo of Abraham Lincoln on October 4, 1860, that was used in campaign posters.  In a more somber tone, he also took a photo of the hearse that contained Lincoln’s body as it made its way through the streets of Chicago in 1865.  This photo has no rights attached so I am including it for you.

Photography has come a long way from those early years!