Calloway County, Kentucky, lies on the border of the state of Tennessee.  And many of those early families who moved to western Tennessee eventually made the move into Kentucky.  And so it was with the Ivie family.

But let’s start at the beginning, in Henry County, Virginia.  John Ivie was born there January 12, 1796.  John was born too late to be involved in the Revolutionary War, but turned 18 during the War of 1812, and was drafted at Henry County Courthouse, as a private in Lieutenant Benjamin Dyer’s 5th Regiment of Virginia Militia.  He served until his discharge of June 23, 1814.  After the war John met and married Elizabeth Wells, August 20, 1816, whose father had a tobacco factory on his farm, manufacturing chewing and smoking tobacco.  John Ivie worked as a carpenter.  Two sons were born in Virginia – Robert C. and Reuben Jackson.  Around 1830 the family moved to Mercer County, Kentucky, where Tabitha Jane was born.  By 1835 they lived in Williamson County, Tennessee, where son John F. was born, and daughter Elizabeth. 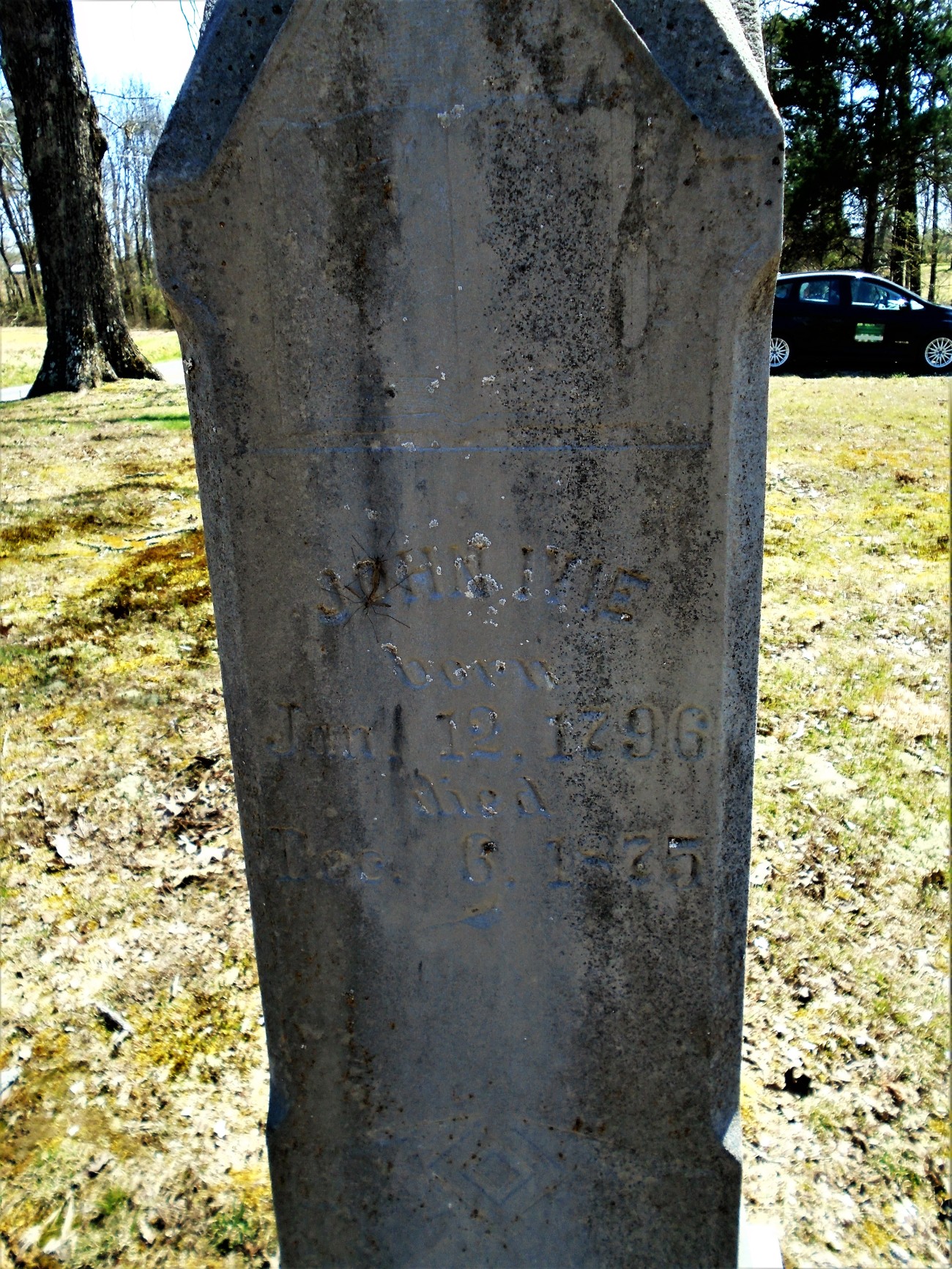 John Ivie died December 6, 1875, leaving land to his five living children and wife.  Elizabeth followed him to the grave in less than four years, dying July 11, 1879.

Will of John Ivie

I, John Ivie, of the county and state aforesaid, having advanced in age though sound in mind, do hereby make my last will and testament as follows.  To wit, first I desire that after my decease all my just debts and funeral expenses be paid out of my cash notes or money arising out of the perishable parts of my estate.

Secondly.  I give and bequeath unto my son R. C. Ivie sixty acres of land on which he now resides, being the west side of the north-east quadrant of Section 2, Township 2, Range 5 East.

Thirdly.  I give and bequeath unto my son R. J. Ivie sixty acres of land on which he now resides being the north end of the north-west quadrant of Section 2, Township 2, Range 5 East.

Fourthly.  I give and bequeath unto my son J. F. Ivie sixty acres of land adjoining R. J. Ivie and the middle parts of same quadrant, section.  Also, ten acres on which he now resides being the north end of my forty-acre tract in Section 3, Township 2, Range 5, East in the north-east quadrant of said Section. 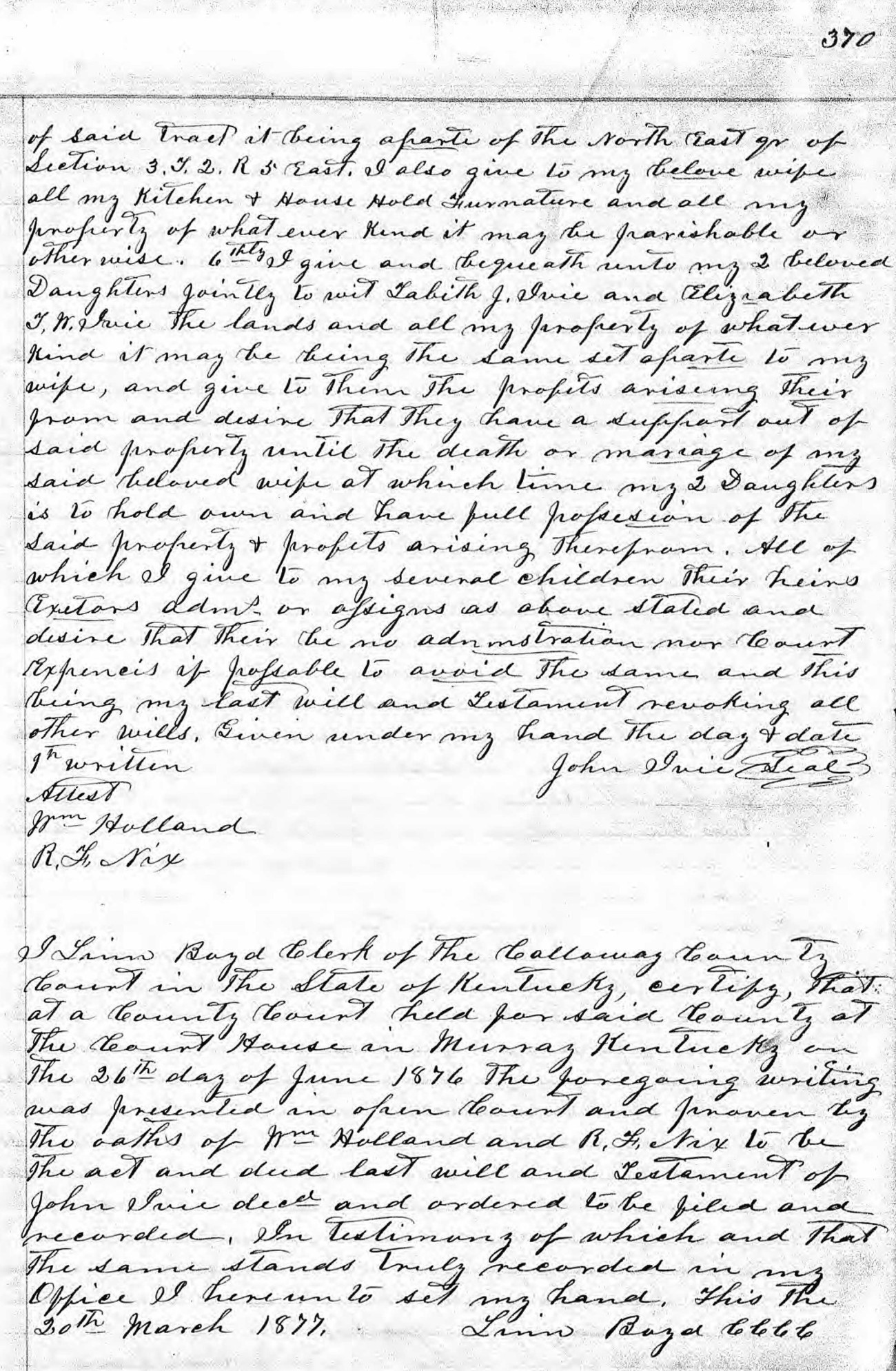 Of said tract, it being a part of the north-east quadrant of Section 3, Township 2, Range 5, East.  I also give to my beloved wife all my kitchen and household furniture and all my property of whatever kind it may be perishable or otherwise.

Sixthly.  I give and bequeath unto my 2 beloved daughters jointly, to wit, Tabitha J. Ivie and Elizabeth T. W. Ivie, the lands and all my property of whatever kind it may be being the same set apart to my wife, and give to them the profits arising therefrom and desire that they have a support out of said property until the death or marriage of my said beloved wife, at which time my two daughters are to hold own and have full possession of the said property and profits arising therefrom.  All of which I give to my several children, their heirs, executors, administrators or assigns as above stated and desire that there be no administration nor court expenses if possible to avoid the same and this being my last will and testament revoking all other wills, given under my hand the day and date above written.

I, Linn Boyd, Clerk of the Calloway County Court in the State of Kentucky, certify that at a county court held for said county at the courthouse in Murray, Kentucky, on the 26th day of June 1876, the foregoing writing was presented in open court and proved by the oaths of William Holland and R. F. Nix to be the act and deed, last will and testament of John Ivie, Deceased, and ordered to be filed and recorded.  In testimony of which and that the same stands truly recorded in my office, I hereunto set my hand this 20th March 1877.                             Lynn Boyd, C.C.C.C. 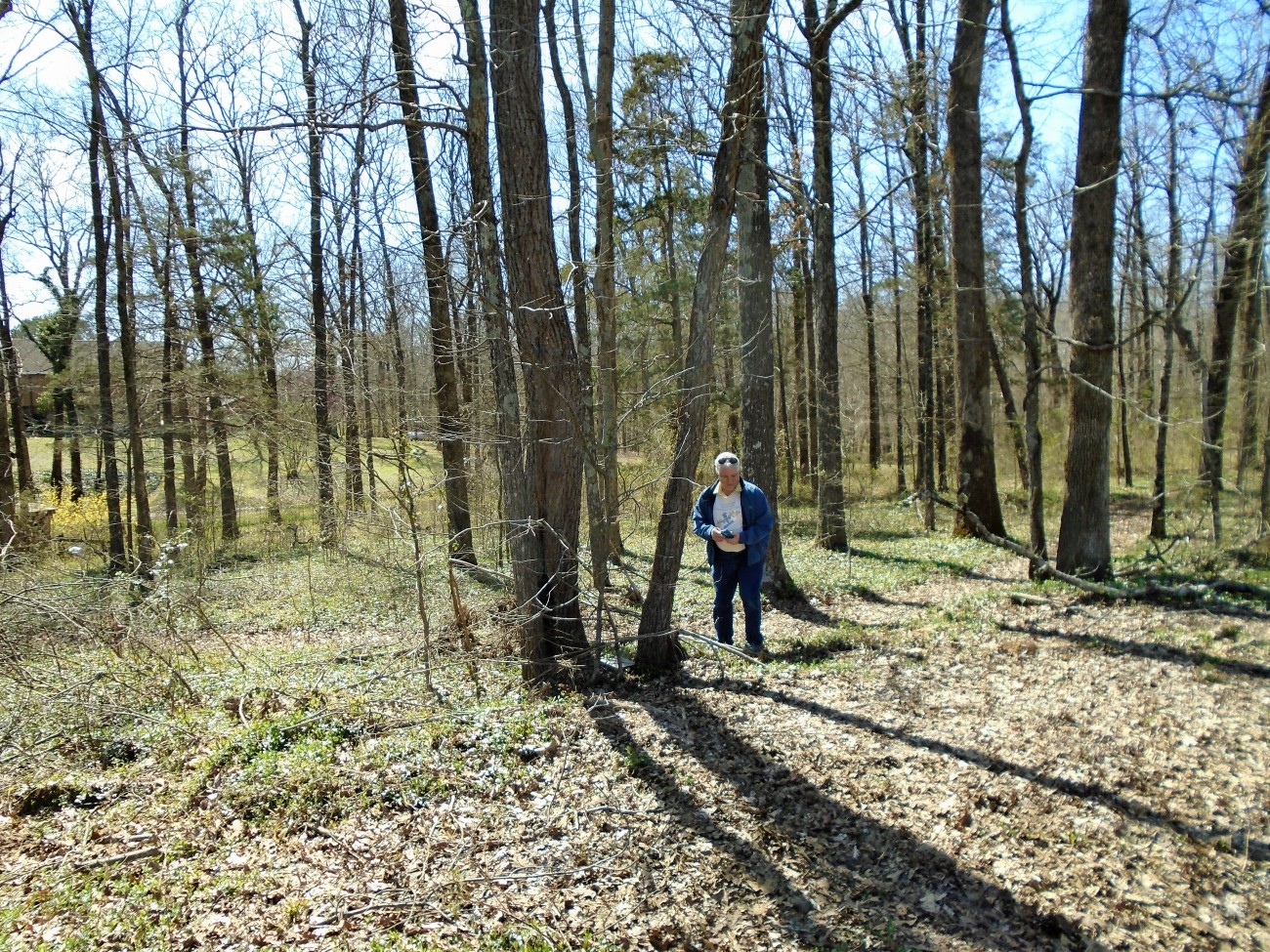 If you take Hwy 94 east from Murray, Ivy Cemetery will be on the left, just past Newburg-Faxon Road on the right.  Ritchey found this cemetery because it had a geocache located there.  It was not in the cemetery, but to the side, so as not to detract from the peacefulness of the cemetery itself.  The name on the sign should be Ivie, since that is how the family spelled their name.