Samuel Haycraft uses the title ‘Major’ in describing John Y. Hill, who came to Elizabethtown about the year 1818.  The Elizabethtown community was settled by immigrants from Virginia and Pennsylvania almost entirely, John Y. Hill coming from the first named.

John Y. Hill was a tailor by trade and training, but in the little frontier town, there were several tailors and the demand for his service was not sufficient to support him and he turned his energies into other pursuits, for a while as horse trader, and then into the burning of brick and building houses.  He built the brick structure standing today at the corner of North Main and Poplar Streets, the present Brown-Pusey Community House.  It was the residence to which he took his bride, the former Rebecca D. Stone, who was born in Bloomfield, Washington County in 1804.

John Y. Hill was the outstanding builder in the town for more than a quarter-century, as evidence of his ability and integrity, several of the buildings which he erected are standing and being used as of the time of this writing.  When he quit building it was estimated that he had built over one-fourth of the houses in the town.

About 1850, John Y. Hill gave up the building of houses; he remodeled his residence and with some alterations and additions, converted it into a hotel (tavern, inn), known as the Hill House.  It soon gained a wide reputation for hospitality, good food and good management.  He died August 1, 1855, his death said to have been due to over-exertion.  The town was saddened by his passing, he was very popular, and as evidence had been elected to the State Legislature in 1832.  Following Hill’s death, his wife, who was known as ‘Aunt Beck’ continued to operate the Hill House during the remainder of her life.  She died in 1882.  Her abilities were such that the business continued to thrive.  Many of the prominent people of the time stopped at the Hill House.  During the period 1871/73 when units of the U.S. Seventh Cavalry were stationed in the town, General and Mrs. Custer and a number of the officers of the regiment had rooms and took their meals with Aunt Beck.

That has now been a century ago, but the appearance of the brick house at the corner of North Main and Poplar Street has changed so little that one might expect to see rugged officers in their blue uniform, boots and spurs, emerge from the front door and stride across the street to their offices, which were located in the two-story brick building, which also contained the offices of some of the county officials.  This building was for years the home of the Will Sprigg family.  The Phil Watkins family lived there at one time; the building was torn away some years back, and another landmark was gone. 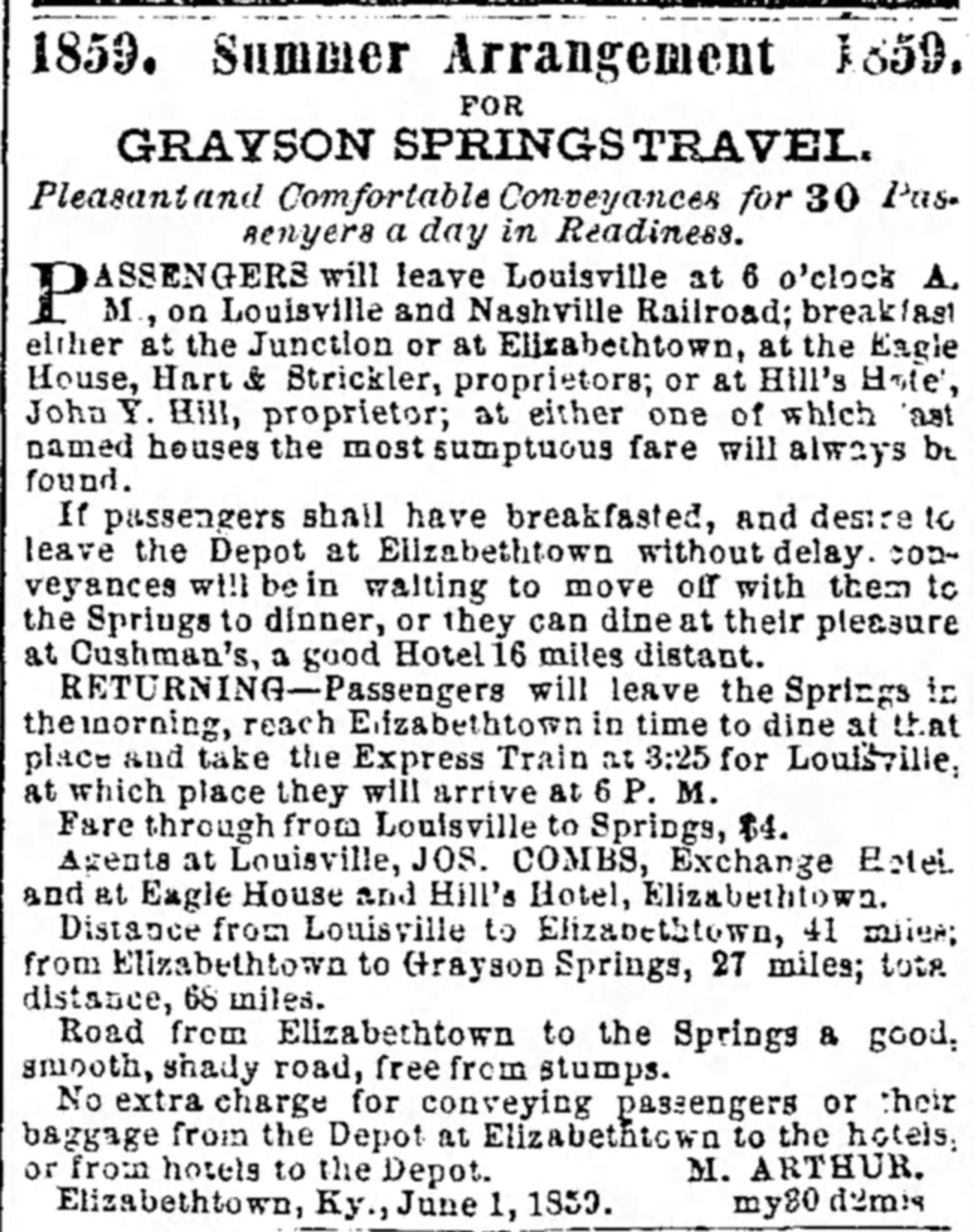 In the above advertisement from The Louisville Daily Courier, Saturday, July 16, 1859, for a fun day of travel to Grayson Springs passengers leave Louisville at 6:00 a.m., stopping for breakfast in Elizabethtown, at several hotels, including ‘Hill’s Hotel, John Y. Hill, proprietor; at either on of which past named houses the most sumptuous fare will always be found.’

At first, I thought it strange that John Y. Hill was still named as proprietor of the hotel in this 1859 article, since according to Mr. McClure he died in 1855.

Even his gravestone lists the date of his death as August 1, 1855.

But I found a newspaper article from The Louisville Daily Courier, dated Wednesday, August 10, 1859, that announces his death – The Elizabethtown Democrat announces the death of Major John Y. Hill, he well-known hotel keeper of that place.

You can tell the gravestone was placed there in more recent years.  Perhaps it was written incorrectly in the family bible.  Who knows?  But since it was in the newspaper from 1859 and in the county death records for that year, I think we can safely say that is the year John Hill died.