A ‘Real’ Son of the American Revolutionary – Washington County, Vermont

Since we have had blogs about ‘real’ Daughters of the American Revolution, I thought we needed to know about a ‘real’ Son of the American Revolution.  The gentleman I found most interesting was William Constant (Constance) Stores Wheeler.  This gentleman lived to the grand age of 93.  Not only was he well-known for his father’s action during the Revolutionary War, but also for his service during the Civil War.  Known as ‘Constant’ he was the son of Comfort Wheeler and Amelia Ainsworth, the third marriage of Comfort Wheeler.  By the age of 10 he was an orphan.  He probably lived with half-brothers or sisters after his parents’ deaths. 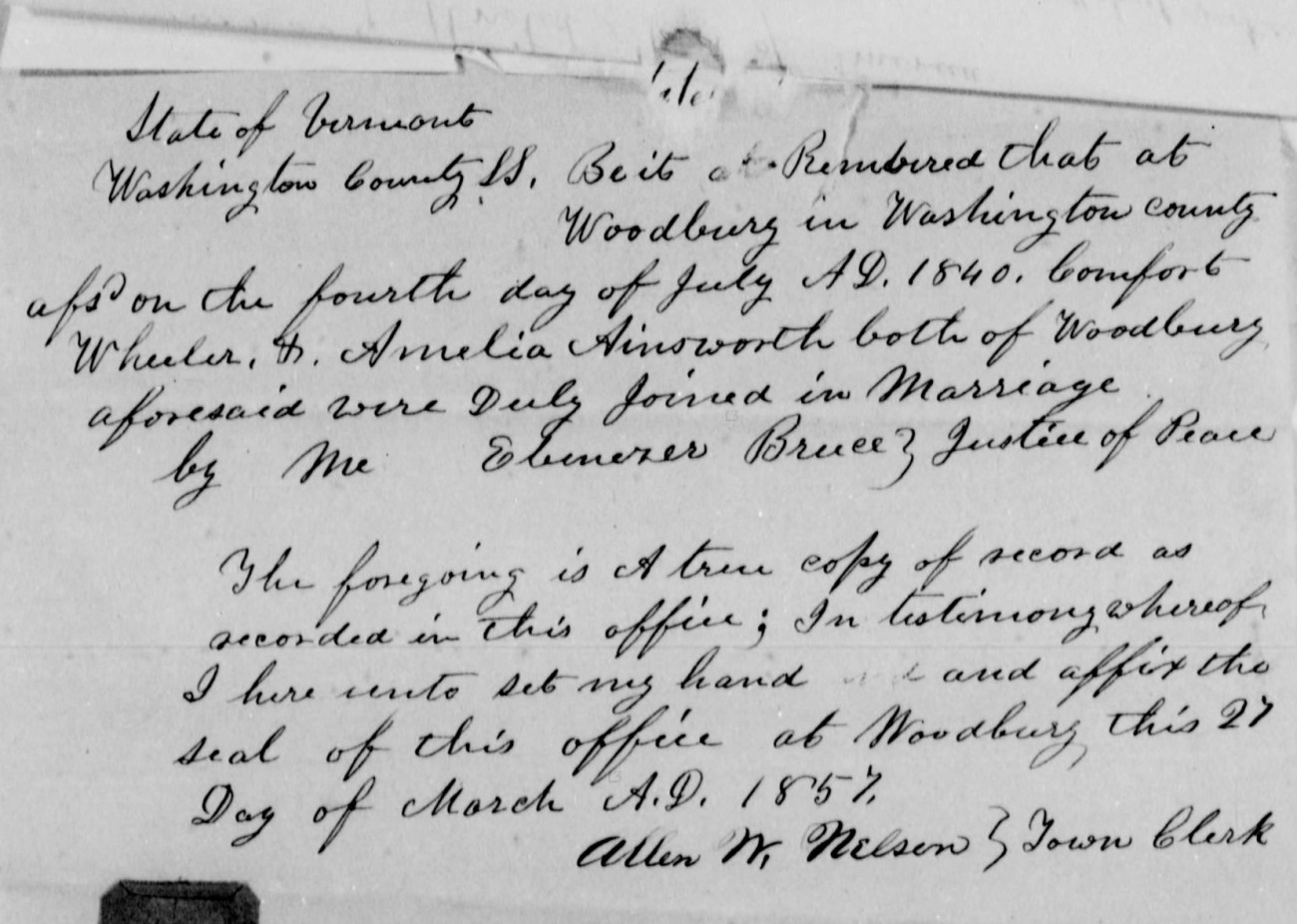 On the fourth day of July 1840, Comfort Wheeler and Amelia Ainsworth, both of Woodbury, Washington County, State of Vermont, were fully joined in marriage by me, Ebenezer Bruce, Justice of Peace

In the 1850 census of Washington County, Vermont, Comfort Wheeler is 86, born in MA; Permilia is 45, born in VT; Mary (daughter by a previous marriage) is 17; Betsy is 7; Constant is 2; Thomas Ainsworth is 82, born in MA, evidently the father of Permilia; Hannah Ainsworth is 79, mother of Permilia.  As you can see Permilia, or Amelia, married a man roughly the age of her father.

The following document was taken from the Revolutionary War records of Comfort Wheeler, listing his dates and duties during the war. 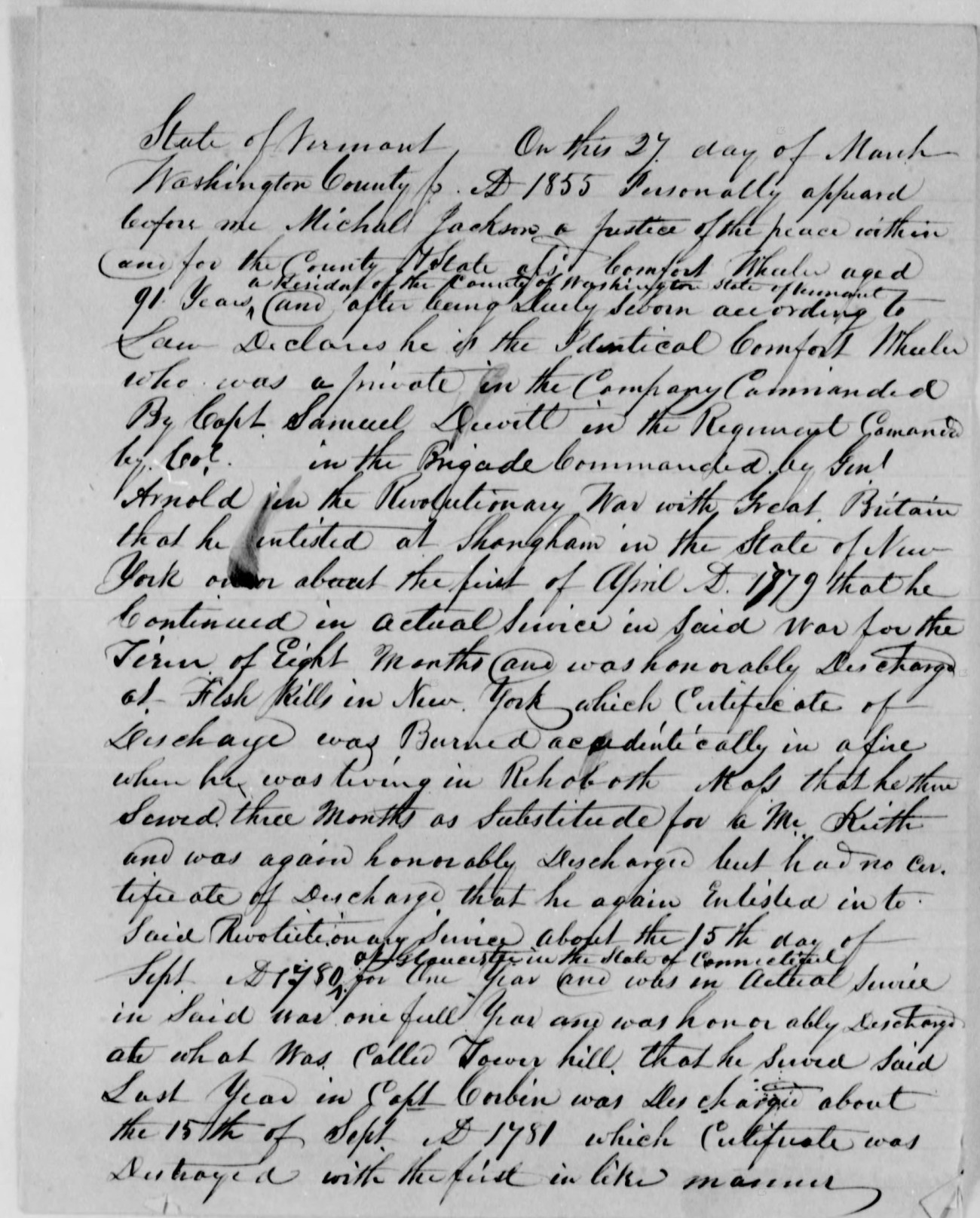 In Washington County, Vermont, on the 27th day of March, 1855, Comfort Wheeler, aged 91 years, a resident of the County of Washington and State of Vermont, after being duly sworn according to law, declares he is the identical Comfort Wheeler who was a private in the Company commanded by Captain Samuel Dewitt in the brigade commanded by General Arnold in the Revolutionary War with Great Britain, that he enlisted at Shongum in the State of New York on or about the first of April 1779, that he continued in actual service in said war for the term of eight months and was honorably discharged at Fishkill in New York, which certificate of discharge was burned accidentally in a fire when he was living in Rehoboth, Massachusetts, that he there served three months as substitute for a Mr. Keith and was again honorably discharged but had no certificate of discharge, that he again enlisted into said revolutionary service about the 15th day of September 1780 at Gloucester in the State of Connecticut for one year and was in actual service in said war one full year, and was honorably discharged at what was called Tower Hill, that he served said last year in Captain Corbin’s and was discharged about the 15th of September 1781, which certificate was destroyed with the first in like manner,

All of which he believes will fully appear by the Muster Rolls of said company, that he has not applied for or received any warrant for bounty land nor does he claim that he is entitled to bounty land, except as above stated and he makes this declaration to obtain the bounty land to which he is entitled by the Act of Congress passed March 3, 1885, and he further declares that he is in the receipt of an annual pension of 76 and 66/100 dollars from the United States since the Pension Act of June 17, 1832, and he humbly appoints Isaac Pennock of Wolcott & E. B. Sawyer, attorney at law of Hydepark to prosecute his claim before the department and receive my warrant for the land when issued.

State of Vermont, District of Washington

Isaac Wells Jr., administrator on the estate of Comfort Wheeler, late of Woodbury, in said District, deceased, presents the names of Betsy Wheeler and Constance Stores Wheeler as minor children of Comfort and Amelia Wheeler.  Evidence having been furnished to this court that the said Comfort died on the 1st day of May 1855, and that the said Amelia, wife of said Comfort, died on the 29th day of January 1857, and that the said Constance Stores and Betsy are the only minor children of said Comfort and Amelia.

In Testimony whereof I have hereunto set my hand affixed the Seal of the Probate Court at Montperlier this 24th day of March 1857.