1829 Will of Nicholas Wallingford – Mason County

Nicholas Wallingford was born in Frederick County, Virginia, the son of Benjamin Franklin Wallingford and Prudence Elliott.  He married Alice Hays about 1779, since their first child, John, was born in 1780.  The family of four brothers – Nicholas, Joseph, Richard and Mark – and their parents, came to Mason County, Kentucky, before 1800.  On August 22, 1786, when Mason County was still part of Bourbon County, Benjamin Wallingford, along with others, signed a petition to form the town of Washington, which later became the first county seat of Mason.

Alice Wallingford died about 1810, and in that year Nicholas married Mary Ginn.  Perhaps twenty children were born to Nicholas, about an equal division between his two wives.  It has been difficult to make a list of children.  We have those listed in his will – John, James, Mark, Hiram, Lewis, Alexander and Thomas.  Notice no daughters are listed.  Except for John, who is the executor, James who receives $50, and Mark, the youngest son of his first wife, the other children are from his second wife. 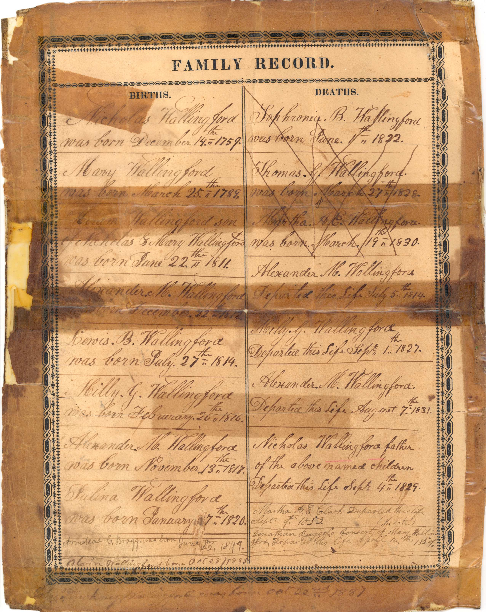 This page from an old Bible gives birth dates (and three death dates) for the children of Nicholas and Mary, along with the couple’s birth dates and Nicholas’ death date:

Notice that Martha, the youngest daughter, was born after her father’s death.

Will of Nicholas Wallingford 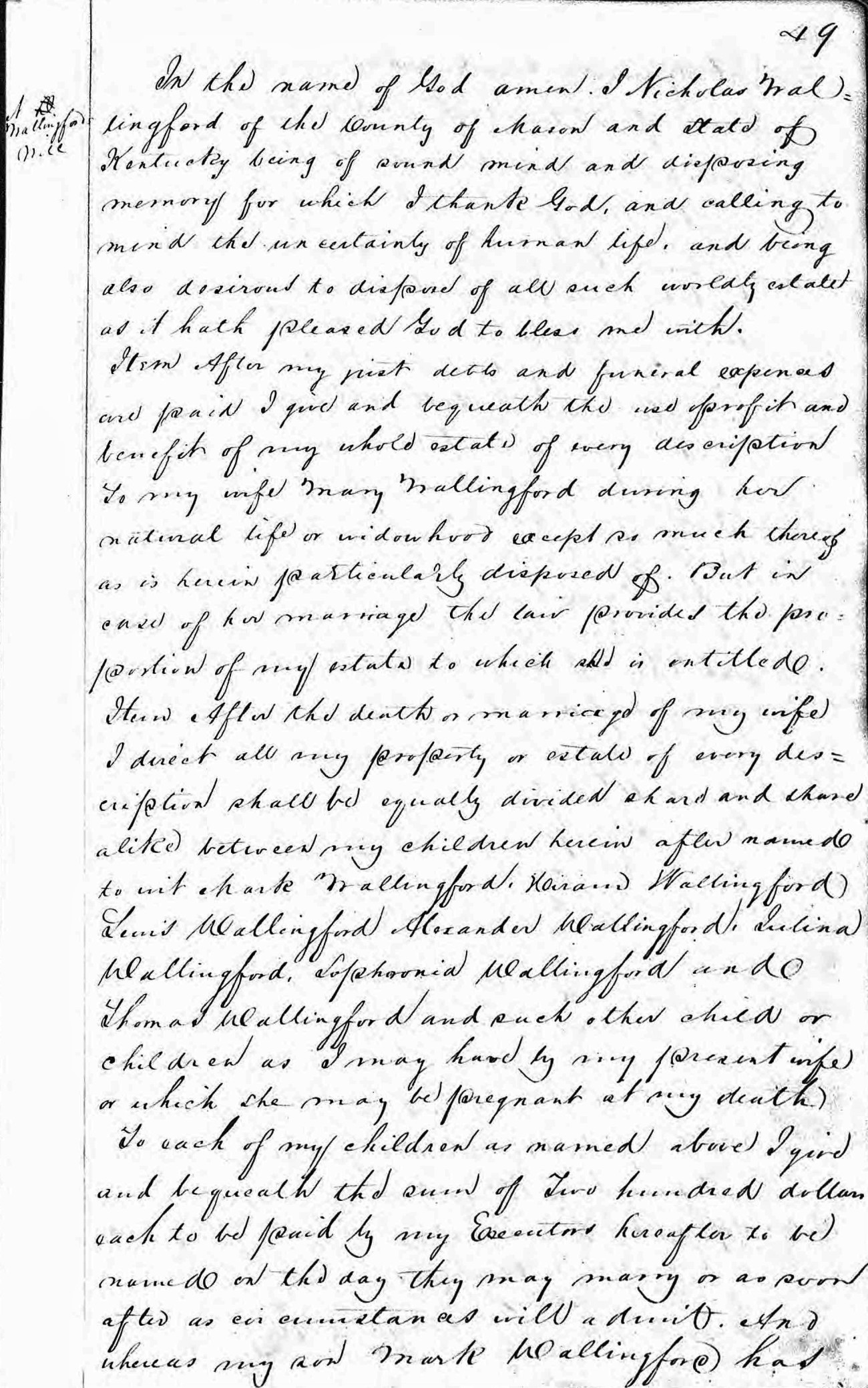 In the name of God, amen.  I, Nicholas Wallingford, of the County of Mason and State of Kentucky, being of sound mind and disposing memory, for which I thank God, and calling to mind the uncertainty of human life, and being also desirous to dispose of all such worldly estate as it hath pleased God to bless me with.

Item.  After my just debts and funeral expenses are paid, I give and bequeath the use, profit and benefit of my whole estate of every description to my wife, Mary Wallingford, during her natural life or widowhood, except so much thereof as is herein particularly disposed of.  But in case of her marriage, the law provided the proportion of my estate to which she is entitled.

Item.  After the death or marriage of my wife I direct all my property or estate of every description shall be equally divided, share and share alike, between my children herein after named, to wit, Mark Wallingford, Hiram Wallingford, Lewis Wallingford, Alexander Wallingford and Thomas Wallingford, and such other child or children as I may have by my present wife or which she may be pregnant at my death.

To each of my children as named above I give and bequeath the sum of two hundred dollars, each to be paid by my executors, hereafter to be named, on the day they may marry or as soon after as circumstances will admit.  And whereas my son Mark Wallingford has

already married and I have given him the sum of one hundred and eighty-two dollars, for which I took his note.  It is therefore to be understood part of the legacy herein intended for him.

Item.  To my son James Wallingford and his heirs, I give and bequeath forever the sum of fifty dollars to be paid as soon as convenient.  My desire is that my executors, hereafter named, shall sell any part of my stock or produce at their own discretion.

Item.  I nominate and appoint my son John Wallingford, Executor, and my wife, Mary Wallingford, Executrix, in this my last will and testament, revoking all others.  In witness whereof I have hereunto set my hand and seal this 22nd day of August 1829.

Last will and testament of Nicholas Wallingford, deceased, was produced in court and proved by the oath of Kendall Moss and Alfred M. Moss, two of the witnesses thereto, and ordered to be recorded.