By Kentucky Kindred Genealogical Research on December 20, 2019 • ( Leave a comment )

George W. Hensley was originally from North Carolina.  He married Ruth Edwards there, and some of the older children were born in that state.  I do not know the exact date George and his family moved to Harlan County, Kentucky.  The children listed in George’s will are James, Josephus, Henry, George W. Jr., Burton, Wilson, Johannah, Mary ‘Polly’ who married Nehemiah Osborn, Martha, Eunice ‘Nicey’ who married Gibson Ball.  A daughter born August 17, 1853 was in the birth records for the county, her name was Rachel, and I believe she died young.  We can use the date for the family’s arrival to Kentucky before 1853.  On Rachel’s birth record her father is listed as Washington Hensley, mother Ruth Edwards.  Two years later son Josephus was born, January 16, 1855; father is listed as G. W., mother Ruth Edwards.  Evidently both George’s used their middle names at times.  Death certificates for Wilson Hensley, 1912, and Henry Hensley, 1920, give North Carolina as their place of birth, as well as their parents.  Washington Hensley is listed as their father, Ruth Edwards, their mother.

Unfortunately George Hensley’s will is not dated.  We know it was probated May 28, 1873, his death being shortly before that date.

In the 1880 census for Harlan, Ruth Hensley lives by herself, daughter Mary and Nehemiah Osborn on one side, son Henry and wife Elizabeth on the other.  Just up the road a few houses was son Washington (G. W.) and his wife Sarah. 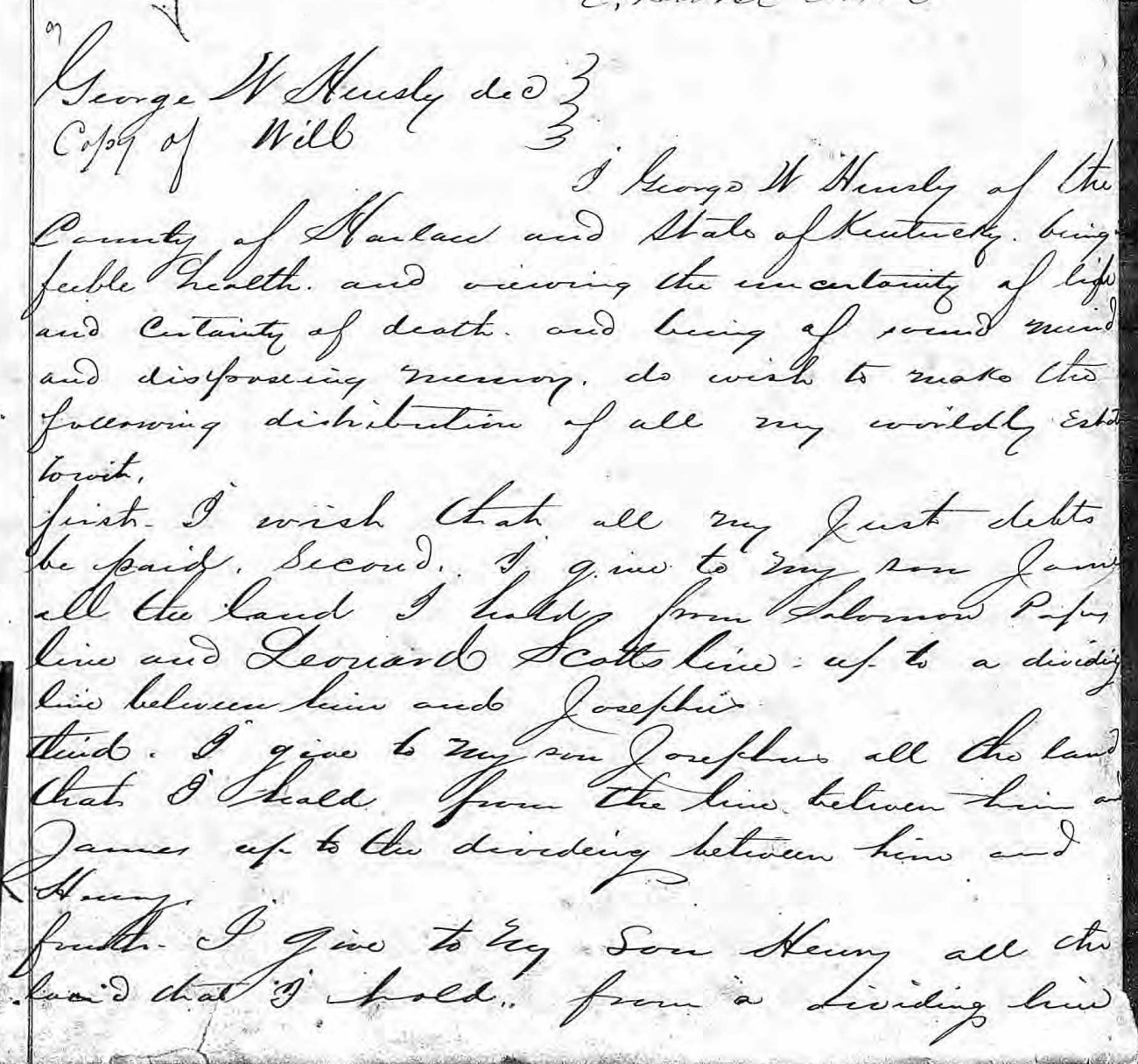 Will of George W. Hensley

I, George W. Hensley, of the County of Harlan and State of Kentucky, being feeble in health and viewing the uncertainty of life and certainty of death, and being of sound mind and disposing memory, do wish to make the following distribution of all my worldly estate to wit.

First.  I wish that all my just debts be paid.

Second.  I give to my son James all the land I hold from Solomon Pope’s line and Leonard Scott’s line, up to a dividing line between him and Josephus.

Fourth.  I give to my son, Henry, all the land that I hold, from a dividing line 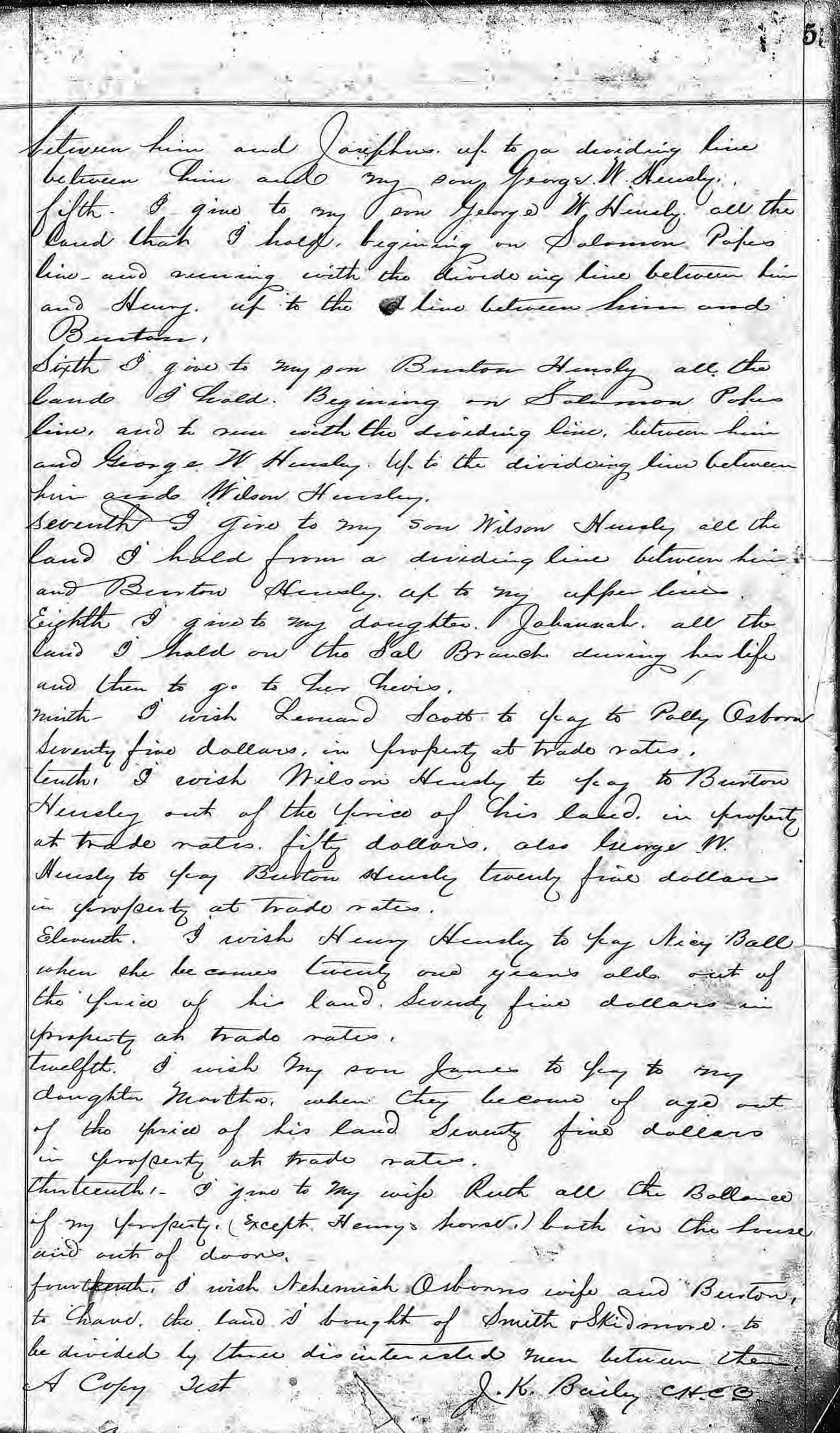 Seventh.  I give to my son Wilson Hensley all the land I hold from a dividing line between him and Burton Hensley, up to my upper lines.

Eighth.  I give to my daughter, Johannah, all the land I hold on the Sal Branch during her life, and then to go to her heirs.

Eleventh.  I wish Henry Hensley to pay Nicey Ball, when she becomes twenty-one years old, out of the price of his land, seventy-five dollars in property at trade rates.

Twelfth.  I wish my son James to pay to my daughter Martha, when she becomes of age, out of the price of his land, seventy-five dollars in property at trade rates.

Thirteenth.  I give to my wife Ruth all the balance of my property (except Henry’s horse), both in the house and out of doors.

Fourteenth.  I wish Nehamiah Osborn’s wife and Burton to have the land I bought of Smith Skidmore, to be divided by three dis-interested men, between them. 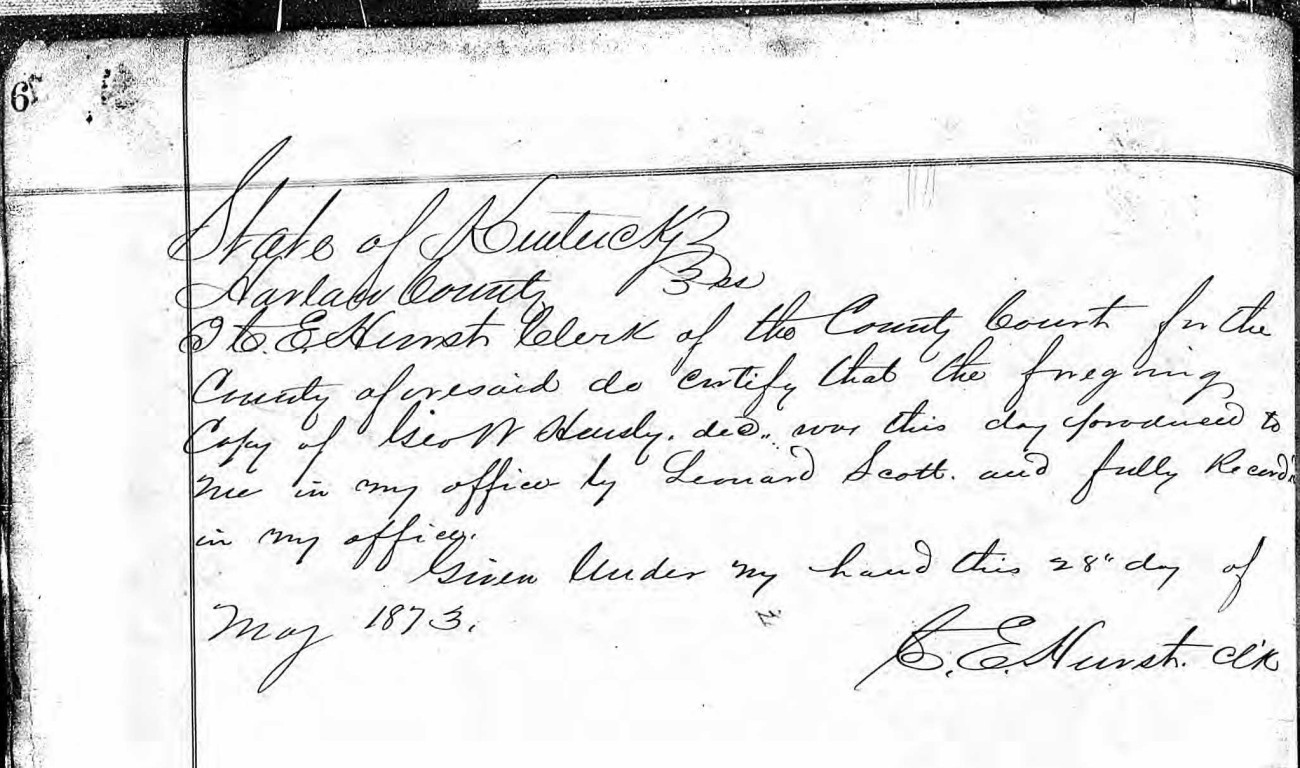 C. E. Hurst, Clerk of the County Court for the county aforesaid, do certify that the foregoing copy of George W. Hensley, decd., was this day produced to me in my office by Leonard Scott and fully recorded in my office.