Let’s visit Grant County today.  Grant is two counties north of Fayette County and the city of Lexington.  Grant County is rural, with small towns such as Dry Ridge, Crittenden and the county seat of Williamstown.  Other than our drive through the county to visit cemeteries, we take I75 when we travel to Cincinnati – not the best way to see what the county has to offer.

Our post today starts with a cemetery photo taken in the city of Williamstown.  Dr. A. D. Blaine and wife Anna Mary are buried there.  Their gravestone is unusual, looks a bit like a stone chimney.

Beginning with obituaries, census records, death certificates and other newspaper articles we find quite a bit of information about this couple.

We learn their birth and death dates (only years on the stone) and parents names from death certificates.  Alexander Dunlop Blaine was born February 7, 1867, the son of Robert C. D. Blaine and Anna Dunlop; he died March 26, 1943.  The family lived in Houstonville in Lincoln County at this time.  Anna Mary O’Hara was the daughter of Charles O’Hara and Ann Nichols, born March 22, 1875 and died January 27, 1950.

The earliest census for Alexander’s family was 1870 from Lincoln County.  Robert, his father, was 28; his mother, Mary A., was 23; Alexander was 3 and sister Fannie was 1.  After the birth of son Robert in 1871 Mary Ann Nichols Blaine died.  After her death Robert Blaine married again and had at least additional three children, and moved his family to Grant County.  In the 1880 census, in addition to the three older children, were William Walker, 5; John M., 3; and Bettie H., 1.

Alexander Dunlap Blaine met and married Anna Mary O’Hara in the late 1890’s.  In the 1900 census of Grant County Alexander is 33, a physician; wife Anna M. is 25.  The couple has been married three years; no children have been born at this time.  By 1910 the family included sons Robert O., 9; Charles A., 3; Annie E. O’Hara, mother-in-law, 66; brothers Robert D., 29; and Logan, 25.  The family lived in the small town of Dry Ridge.  By 1920 another son was listed on the census, Moreland, 6.  Annie O’Hara and the two brothers were not in the household, but ten years later brother Robert D., 58, did live with the family. 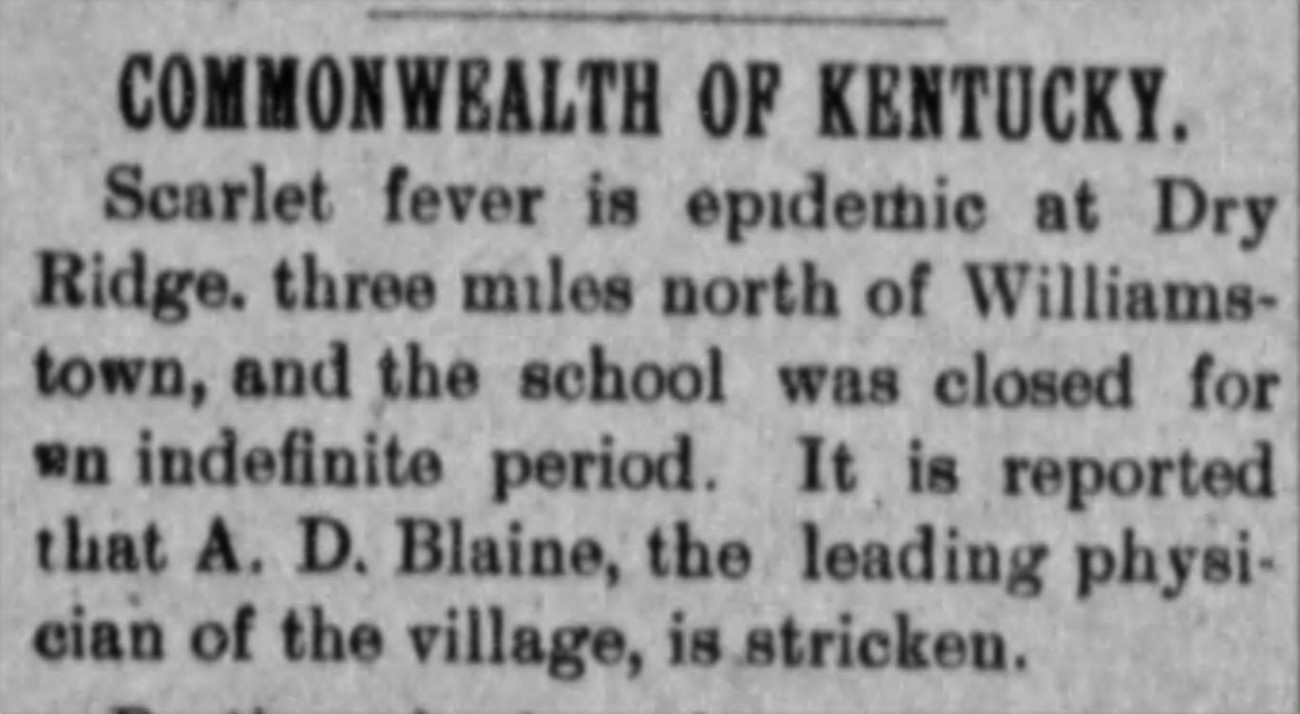 In The Citizen, Thursday, December 19, 1901, we find that scarlet fever is epidemic at Dry Ridge.  The school has been closed indefinitely.  Dr. A. D. Blaine, leading physician of the village, is also stricken.

A devastating fire occurred on December 5, 1907, starting at the home of Dr. Blaine and his family.  The total loss of property was $15,000.  The Williamstown fire department aided the smaller town of Dry Ridge.

Twenty years later another fire started in the middle of the night.  Dr. Blaine’s dog woke the family with his barking and flames were discovered shooting out of the old Carlsbad Springs Hotel, which was famous since the Civil War for its curative waters.  The fire resulted in damages from $250,000 to $350,000.

Thirty guests were awakened by the barking dog and the cry of fire. 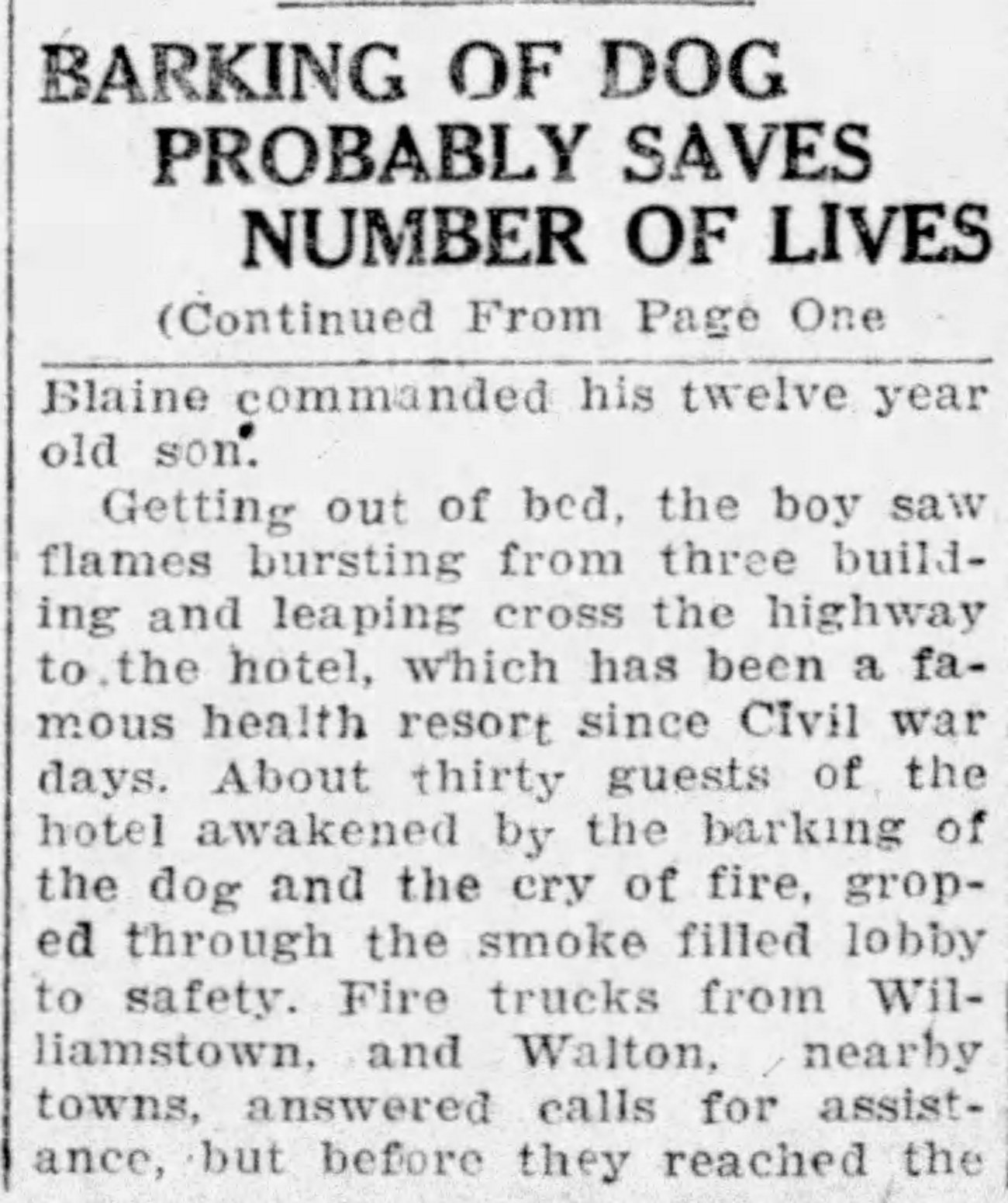 The hotel and eleven other structures were in ruins.  These included the Farmers Bank of Equity building, the post office, a moving picture theater, restaurant, drug store and a number of private homes.  The hotel owner and his wife were carried from the building just before the walls collapsed.

At this time period there were no smoke alarms in every room as we have today.  Buildings were constructed primarily of wood making fire an ever-possible danger. 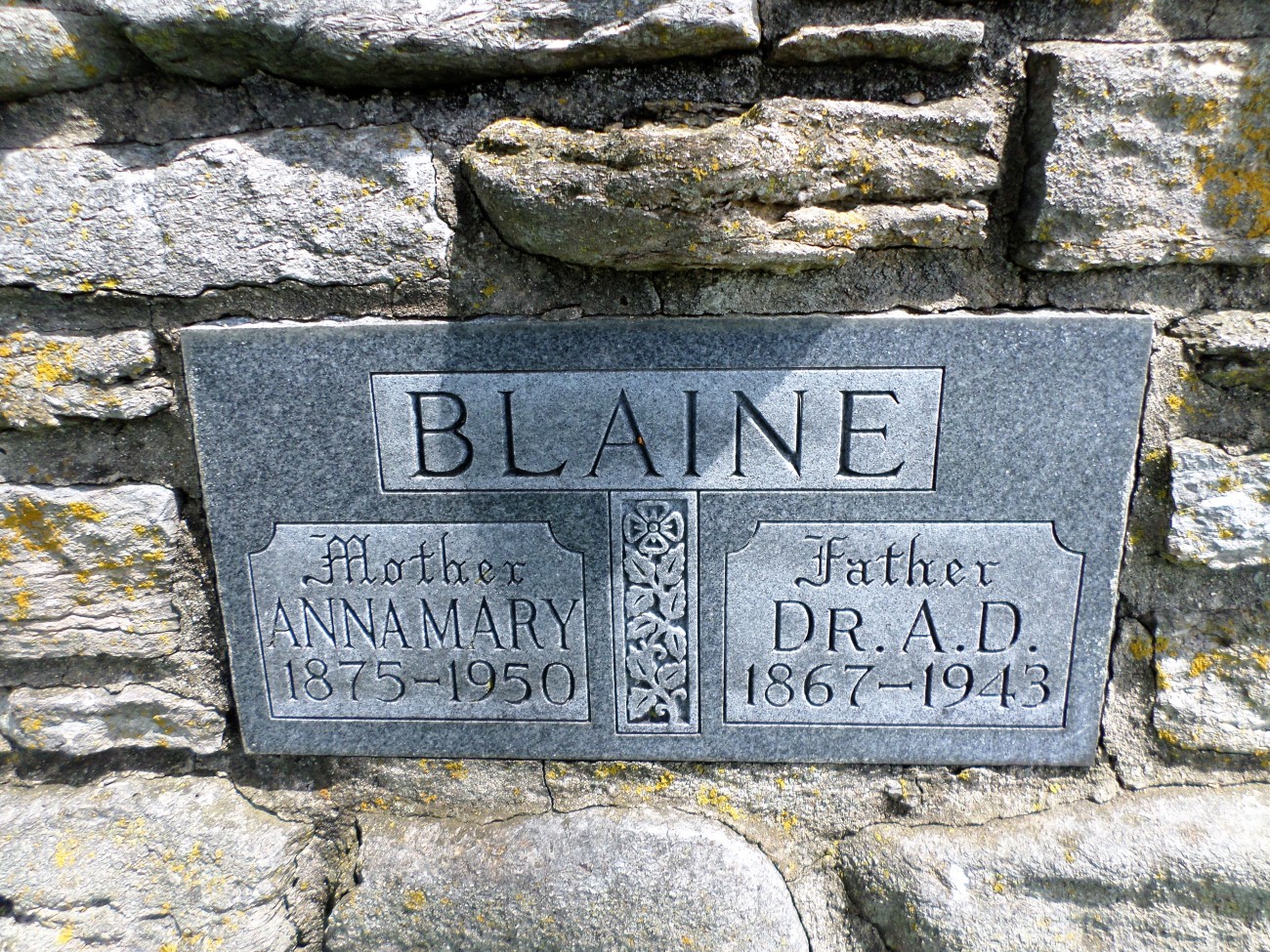 At the age of 76 Alexander Blaine passed away.  His great contribution to the town of Dry Ridge as physician will always be remembered.

Seven years later Anna Mary O’Hara Blaine died.  She was living with her youngest son, Moreland, at the time.  Perhaps she will be remembered as a music teacher as listed in the census.