Zachary Wade was an indentured servant brought to Kent County, Maryland from Warwickshire, England, by Margaret Brent in 1641.  After serving his term of servitude to Miss Brent, about 4-6 years, Zachary Wade later became Margaret Brent’s legal advisor.  He became a very wealthy man, and moved to Charles County, purchasing many grants of land, including the following:

Limmine – purchased 4/26/1657 by Zachary Wade and William Hatton, 500 aces on the north side of the Potomac River above Maryland Point at Lawson’s Marsh.

Wadestone – purchased 10/7/1661 by Zachary Wade, 300 acres on the north side of the Piscataway River, one-half mile east of Goose Bay.

Markett Overton – purchased 5/10/1663 by Zachary Wade, 1,00 acres on the east side of the Piscataway River at Wades Branch of St. John’s (aka Pamunkey) Creek.

Little Linnen – purchased 9/7/1666 by Zachary Wade, 50 acres on the west side of Piscataway River.

Little Sinner – purchased 9/7/1666 by Zachary Wade, 50 acres on the west side of Piscataway River.

Forrest Green – purchased 9/18/1668 by Zachary Wade, 500 acres on the south side of Piscataway River near an old Indian town called Natting.

Friendship – purchased 6/21/1669 by Zachary Wade, 200 acres in the woods near a place commonly known as the wading place.

Wadestone’s Enlargement – purchased 6/21/1669 by Zachary Wade, 100 acres on the east side of the Potomac River on Goose Bay. 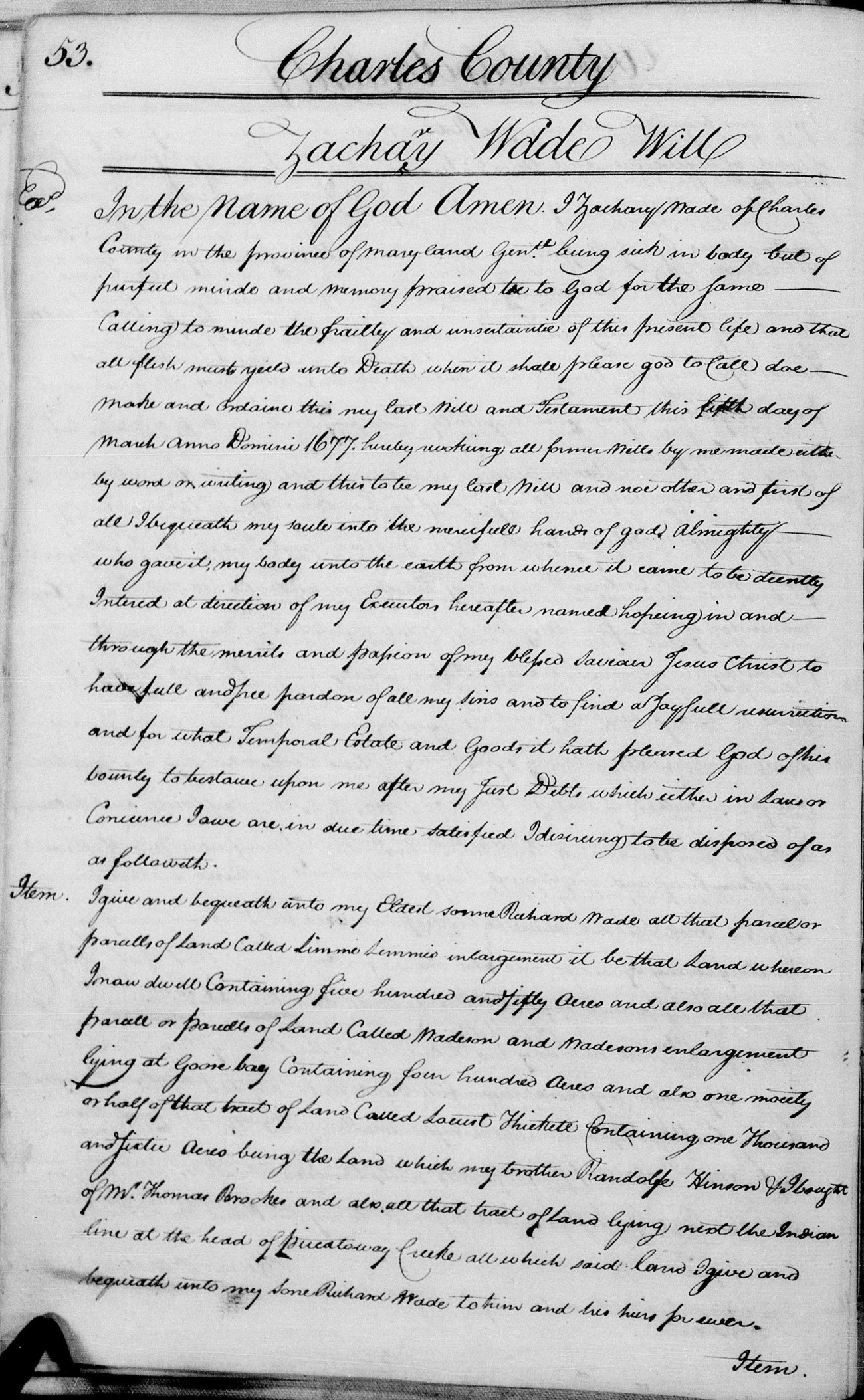 In the name of God, Amen.  I, Zachary Wade, of Charles County, in the province of Maryland, Gentleman, being sick in body but of perfect mind and memory, praised be to God for the same, calling to mind the frailty and uncertainty of this present life, and that all flesh must yield unto death when it shall please God to call, do make and ordain this my last will and testament, this fifth day of March, Anno Domini, 1677, hereby revoking all former wills by me made either by word or writing and this to be my last will and no other and first of all I bequeath my sole into the merciful hands of God Almighty, who gave it, my body, unto the earth from whence it came, to be decently interred at direction of my executor, hereafter named, hoping in and through the merits and passion of my blessed savior, Jesus Christ, to have full and free pardon of all my sins and to find a joyful resurrection , and for what temporal estate and goods it hath pleased God of this bounty to bestow upon me, after my just debts, which either in law or conscience I owe, are, in due time, satisfied, I desiring to be disposed of as follows:

Item.  I give and bequeath unto my eldest son, Richard Wade, all that parcel or parcels of land called Limmine, Lemmines enlargement, it be that land whereon I now dwell, containing five hundred and fifty acres and also all that parcel or parcels of land called Wadestone and Wadestone’s Enlargement, lying at Goose Bay, containing four hundred acres and also one moiety or half that tract of land called Locust Thicket, containing one thousand and sixty acres, being the land which my brother Randolph Hinson and I bought of Mr. Thomas Brookes, and also all that tract of land lying next to the Indian line at the head of Piscataway Creek, all which said land I give and bequeath unto my son Richard Wade, to him and his heirs forever.

Item.  I give and bequeath unto my daughter, Theodosia Wade, the one moiety or tract of land which my brother, Luke Gardiner, and I took up together, lying upon the eastern branches of Piscataway and also all that tract or remainder of that parcel of land called Markett Overton lying at Pomonkey, all which said land I give unto my said daughter, Theodosia Wade, to her and her heirs forever.

Item.  I give and bequeath unto my son, Richard Wade, one mare and her increase that is now with her, and all future increase, that she may bring and also four thousand pounds of tobacco and one feather bed, half ? and pillows, one plain rug, and one shagged rug, curtains and valances and three pair of sheets, and the said mare to be disposed as to the disposition of my executors to my son’s use, and also one Negro boy named Black Jack, all which said goods I give unto my son Richard Wade and his heirs forever.

Item.  I give and bequeath unto my daughter Theodosia Wade one Negro girl named

Judith and a sorrel mare and her increase and also one feather bed and three pair of sheets with rugs and blankets and all her mother’s clothes and rings and one silver candle cup and two spoons which said goods I give and bequeath to my said daughter Theodosia Wade, to her and her heirs forever.

Item.  I give to Mary Hinson the first mare foal that any of my mares bringeth this present year.

In the presence of us Abraham Sapcoate, John Guyott, Richard Hodgson

It is my free desire that my brother Randall Hinson and brother William Hatton, being executors of my last will, that if it can be done by any lawful means to divide the parcel of land that was taken up by brother Gardiner and me, I having the first choice according to agreement, if not the heir to make good the division and for the confirmation hereof I have put my hand and seal this 5th March, Anno Domini, 1677.

On the back of the foregoing will was endorsed the following probate, to wit, May 20th 1678 by virtue of a commission from the Honorable Philip Calvert, Esquire, Judge and Company General for probate of wills and granting administration within this province of Maryland to me directed bearing date the 13th day of 1678, I called before me Richard Hodgson and John Guyott, two of the witnesses to this will who made oath the day and year above written that they did see Mr. Zachary Wade sign, seal and publish the within writing as his last will and testament, witness my hand the day and year first above written.