Leonard Mattingly, Senior, also known as “Old” Leonard, was born in 1739 in St. Mary’s County, Maryland, the son of Charles Mattingly and Sarah Catherine Fowler.  In 1760 he married Margaret Monica Monarch.  They had a large family which migrated with them to Washington County, Kentucky, at the close of the 18th century.  Monica died in 1812, and Leonard married Dorothy Hardesty in the same year.  The family lived in the portion of Washington County that became Marion County in 1834.  Leonard and many family members are buried at St. Charles Cemetery in Marion County.  There is no gravestone for him. 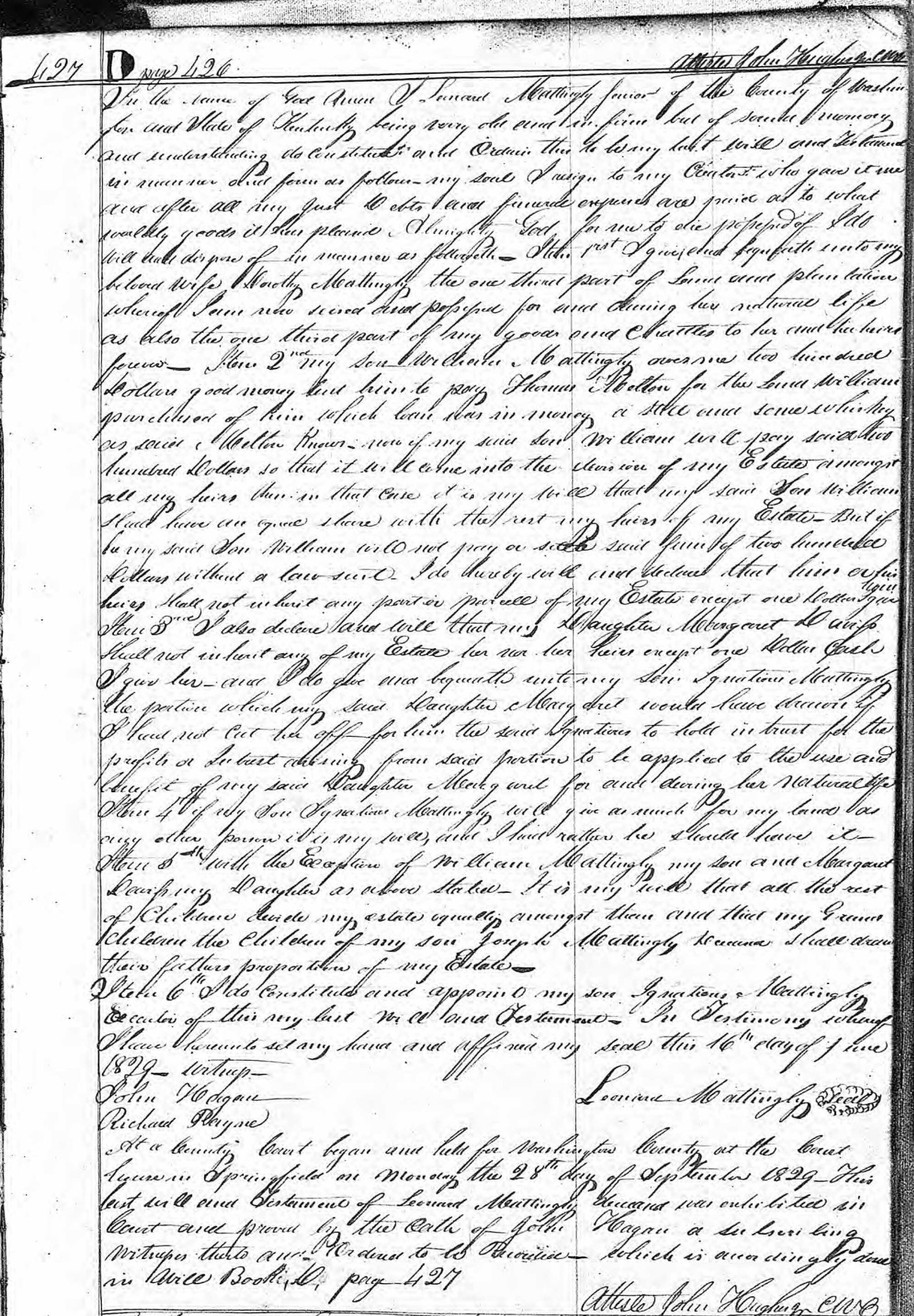 Will of Leonard Mattingly, Senior

In the name of God, Amen.  I, Leonard Mattingly, Senior, of the County of Washington and State of Kentucky, being very old and infirm, but of sound memory and understanding, do constitute and ordain this to be my last will and testament in manner and form as follows.  My soul I resign to my creator who give it me and after all my just debts and funeral expenses are paid as to what worldly goods it has pleased Almighty God for me to die possessed of, I do will and dispose of in manner as followeth.

Item Third.  I also declare and will that my daughter Margaret Davis shall not inherit any of my estate, her nor her heirs except one dollar cash I give her and do give and bequeath to my son Ignatius Mattingly the portion which my said daughter Margaret would have drawn if I had not cut her off, for him the said Ignatius to hold in trust for the profits or interest arising from said portion to be applied to the use and benefit of my said daughter Margaret, for and during her natural life.

Item Fourth.  If my son Ignatius Mattingly will give as much for my land as any other person it is my will and I had rather he should have it.

Item Fifth.  Wit the exceptions of William Mattingly, my son, and Margaret Davis, my daughter, as above stated, it is my will that all the rest of my children divide my estate equally, amongst them and that my grandchildren, the children of my son Joseph Mattingly, deceased, shall draw their father’s proportions of my estate.

Item Sixth.  I do constitute and appoint my son, Ignatius Mattingly, Executor of this my last will and testament.  In testimony whereof I have hereunto set my hand and affixed my seal this 16th day of June 1829.

At a Count Court began and held for Washington County at the Courthouse in Springfield on Monday, the 28th day of September 1829.  This last will and testament of Leonard Mattingly, deceased, was exhibited in court and proved by the oath of John Hagan, a subscribing witness thereto and ordered to be recorded, which is accordingly done in Will Book D, Page 427.