By Kentucky Kindred Genealogical Research on September 14, 2011 • ( Leave a comment ) 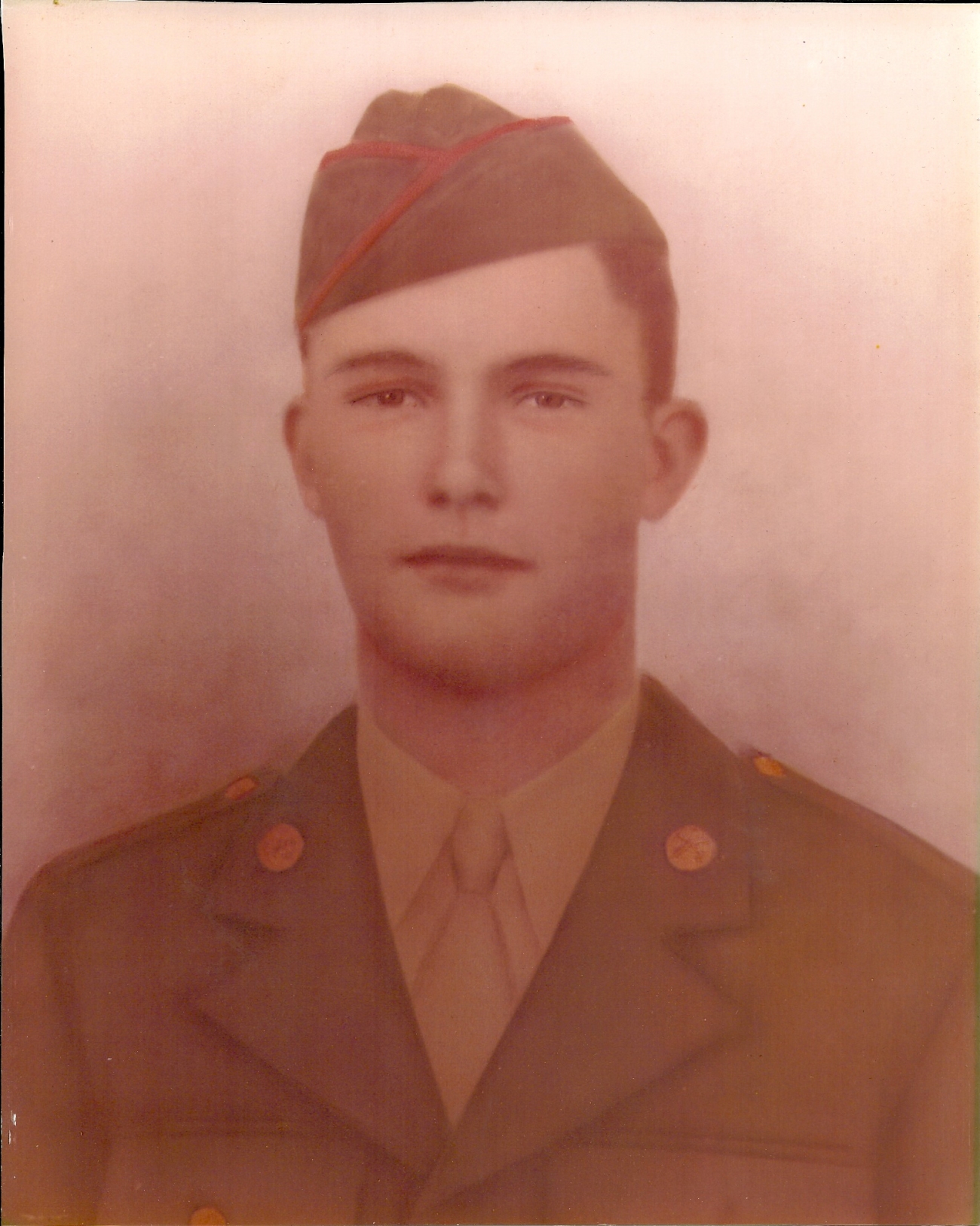 Note by Phyllis Brown:  68 years ago today my Uncle Robert was killed in Salerno, Italy.  He was a Technician 5th Class with the U.S. Army, 106th Anti-Aircraft Artillery Battalion.  He died Tuesday, September 14, 1943 – Robert would have been 22 in 4 days.  Robert was buried at the Sicily-Rome American Cemetery in Nettuno, Italy – Plot I, Row 13, Grave 13.  He was awarded the Purple Heart.

The family was making sorghum in the field behind the barn when Aunt Maggie and Brother Christopher came to give them the bad news.  Mom said she knew something was very wrong when she saw them.  She was 12 – and her brother had been away for three years.  Years after Robert’s death she would come in and find grandmother crying – her first two sons were gone.  My Uncle Rueben died twelve years earlier from appendicitis.  A few months after Robert’s death my Uncle Paul – the last son – was called to war.  Fortunately he made it through and returned to his family.

It was always my mom’s desire to visit Robert’s grave.  She has not had the opportunity – and at her age now, will never make the trip.  Perhaps one day I can go to Sicily and visit the cemetery where he is buried.  Mom remembers Robert as the handsome older brother who played the French harp and was a truly kind and gentle person.

The following was an article in The Springfield Sun on Wednesday, September 8, 1993, for the 50th anniversary of Robert’s death.

Editor’s note:  What follows is a story about a Washington County serviceman who was killed 50 years ago this week during World War II.  The Sun is featuring a series of stories about all the county’s WWII casualties, that will be published on the anniversaries of their deaths.  Carrico’s story was written by Tom Duncan Reed.

Joseph R. Carrico was born in a small rural community in Washington County near his parish church of St Rose.  He was the first of six children born to Joseph R. and Alice Montgomery Carrico on September 18, 1921.  His brothers and sisters include Mary Alice Carrico, Beulah Smith, Catherine Hill, Margaret Ann Tingle and Paul Carrico.  He grew up on the farm and attended Badget Public School for his early schooling.

In the fall of 1940 he enlisted in the Kentucky National Guards, joining the Battery C, 106 Coast Artillery (A.A.A.) Battalion based in Springfield.  It was just a few days later the Battery was inducted into federal service.

On September 9, 1943, Battery C made its third amphibious invasion at Salerno, Italy.  The enemy resistance at the early stages of the landing were not too great but day by day it stiffened.

September 14, 1943, was a fairly warm and clear day, especially for our aircraft to attack the enemy.  That day friendly P-40 fighters attacked German targets just beyond that battery’s possition.

One P-40 dove for a German target, released its bomb load and strafed the targets.  It came out of its dive right over our gun position.  As the P-40 approached our position I thought it was on fire, because smoke was tailing its wings.  But this observation was wrong.  The smoke I saw was from its guns firing.

In a split two seconds 50 caliber bullets hit our half-tract where T-5 Joseph R. Carrico was seated in the ready-seat and was struck by the 50 caliber bullets from the P-40.  Along my side was our gun Sergeant John E. Parrott who also had been mortally wounded by this aircraft’s fire.  Also, Henry Spence, of Mt. Sterling, suffered fatal wounds.

As I recovered and got to my feet, I observed the planes fire power had also ignited some of the ammunition on our half tract.  Grabbing the only fire extinguisher with our ack-ack-gun, I ran to the rear where there is an opening on the armor and which contains the two firing seats.  Slumped over in the ready-seat and wounded by the P-40 fire was T-5 Joseph R. Carrico.  One other of our gun crew helped me to lower him to the ground, where I thought I detected a slight pulse.  It was less than five minutes before a medics crew was with our gun crew.  While Sergeant Parrott was being placed on a weapons-carrier (an open truck about the size of a pick-up truck) the medic was caring for T-5 Carrico, but reported his wounds were fatal.  His body was transported to the rear along with that of Sergeant Parrott and Spence.

It was learned later by our commanding officer that the plane that strafed our gun section had been hit by enemy fire.  The P-40’s guns were out of control.

The remains of Joseph R. Carrico were laid to rest in the Military Cemetery at Salerno, Italy, where they rest to this very day.  John R., as we all knew him, was a dedicated soldier, a sincere religious person and a wonderful son and brother.