Ritchey and I visited Glover’s Bookery, located at 862 S. Broadway, in Lexington, Saturday.  They have a very large section of books on the history of Kentucky, as well as county histories.  You never know what you will find.  It depends on which estate sales they visited, or who has brought books in to sale.  Let me just say we hit the jackpot.  My pockets are now empty.  But it was money well spent! 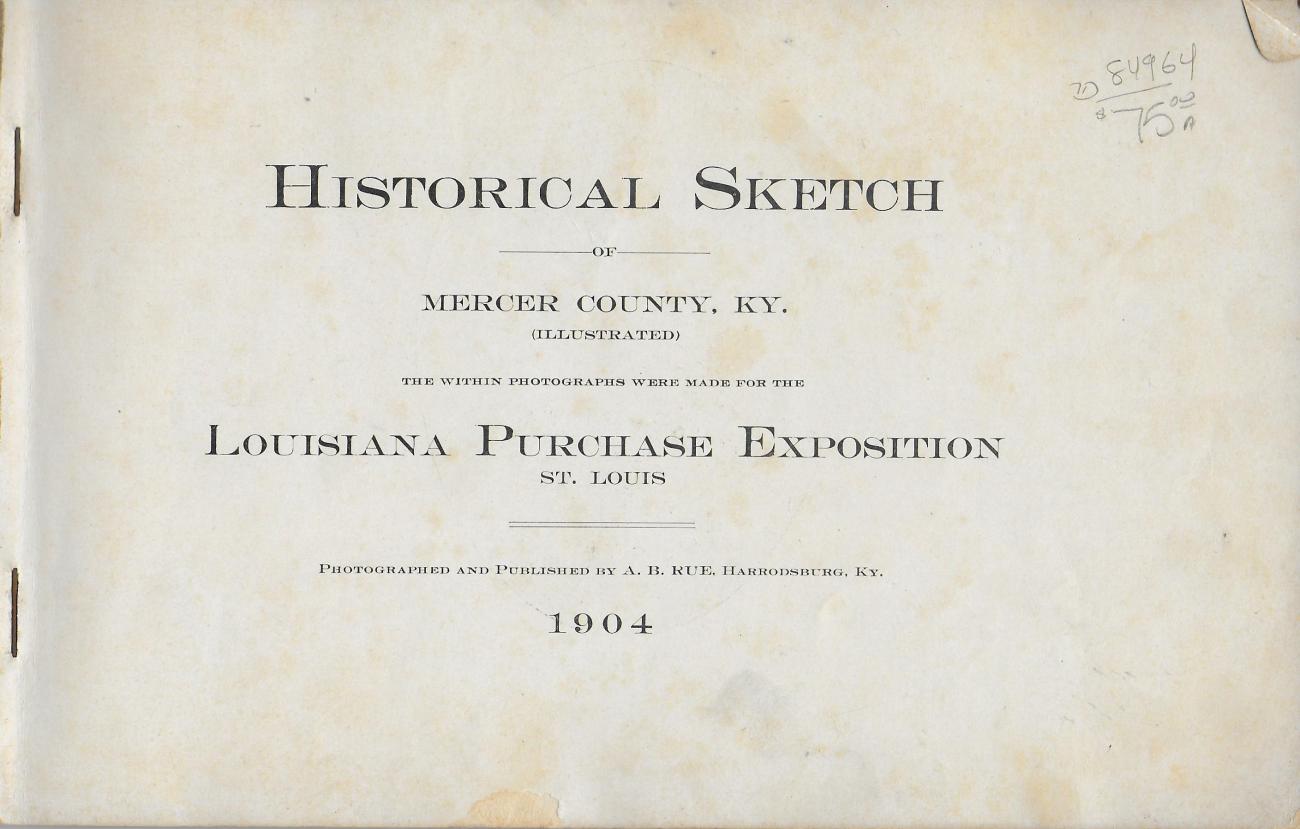 One of my treasures is a small booklet by A. B. Rue, the author and photographer of Historical Sketch of Mercer County, Kentucky (Illustrated) The Within Photographs Were Made For The Louisiana Purchase Exposition, St. Louis – and the date is 1904.

I had never heard of Mr. A. B. Rue.  There are Rues in Mercer County, but did not know one of them was a photographer – or that he had a wife who was a famous portrait painter!  The following biography gives us a good idea of the life of this couple.  In the 1900 census of Mercer County, Archibald Rue is 57, had been married 35 years, and was a photographer.  His wife, Jessie, was also 57, had six children, four of whom were living at the time, and she is listed as a portrait painter!  Their daughter, Lelia Linney, 33, divorced, a lady’s perfume saleswoman, was living with the couple, along with her three children, Jessie, Cleon and Margie.  Insco Rue and Margie Rue also live in the household with their parents – Insco is a photographer and Margie is in school.

The Louisiana Purchase Exposition, informally known as the St. Louis World’s Fair, was an international exposition held in St. Louis, Missouri, from April 30 to December 1, 1904.  More than 60 countries and 43 of the 45 American states, claimed exhibition spaces at the fair.  It is remarkable that I hold a small piece of what was shown to the world as part of Mercer County, Kentucky.  The photographs shown by A. B. Rue gave my little corner of the state a wonderful and varied history to share with the rest of the world, including the right to call Harrodsburg the first town in Kentucky and the oldest permanent American settlement west of the Appalachians.

I will have so much more to share with you from the pages of this booklet!

A. B. Rue, formerly a photographic artist of high repute in Louisville, is a native of mercer County, Kentucky; was born in 1842, and is a son of Nelson and Margaret (Adams) Rue, both natives of Kentucky, but whose parents came from new jersey at an early day and passed their lives in this state on a farm. A. B. Rue is the fourth in a family of nine children born to his parents. He remained on the home farm until 1861, when he enlisted in Company F, Nineteenth Kentucky Volunteers, and was in active service the three years following, being promoted to second-lieutenant in the meanwhile, and mustered out as a first-lieutenant at Louisville in 1865.  He took part in the following engagements:  Mill Springs, Cumberland Gap (and the campaign from the latter to the Ohio River), Arkansas Post, and in all the engagements by Grant in the siege of Vicksburg.  At the latter place he was taken ill and was unfit for duty about four months, after which he returned to his regiment in New Orleans and remained with it until mustered out as stated above, when he entered college at Cincinnati.  In 1866 he learned photography at Harrodsburg, Kentucky, and for seven years followed his vocation in various towns through the state.  In 1881 he located in Louisville at No. 341 Fourth Avenue, where his merits as an artist were soon recognized and where he was actively employed until 1888, when he moved to Harrodsburg, Kentucky.  He was married, September 5, 1865, to Jessie Anderson, a daughter of Henry T. Anderson, so well-known as a Reformed minister.  Mrs. Rue is celebrated as a portrait painter, and has studied under the best masters in America.  She has followed the art for many years, and is an artist of superior talents.  Mr. and Mrs. Rue are the parents of six children:  Lelia, Insco, Zoe, Letcher, Margie, and one dead.  Mrs. Rue is now a member of the Presbyterian Church, while Mr. Rue is a member of the Warren Memorial Presbyterian Church; he is a member of the G.A.R., I.O.O.F., K. of P., and K. of H.