John M. Jordan – At the Battle of New Orleans 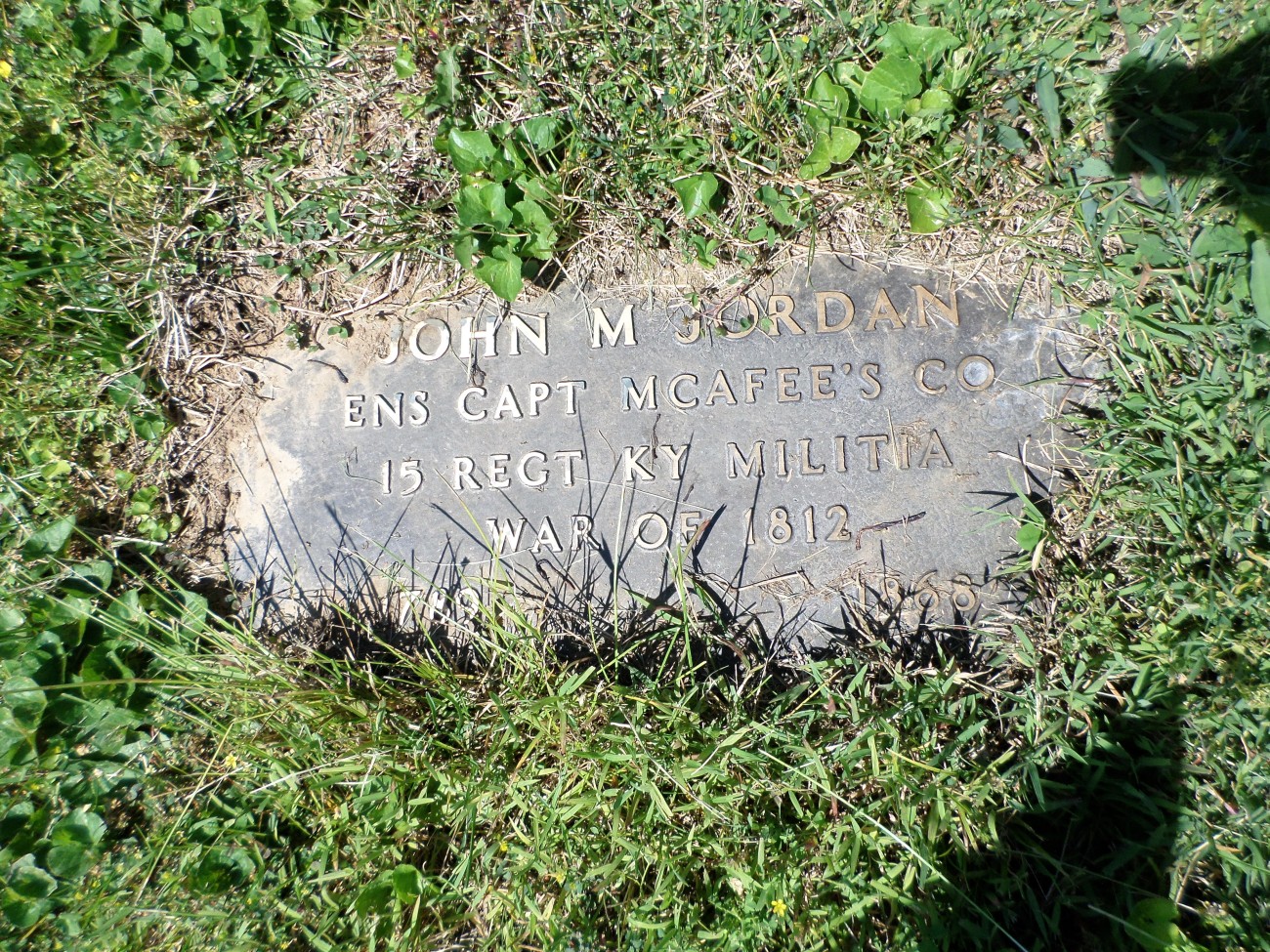 Mt. Hebron Methodist Cemetery is located just over the county line from Mercer to Anderson, on US127.  Ritchey and I visited in May of last year.  One gravestone of interest is that of John M. Jordan.  He has a gravestone put there by his family, and a military one that was added at a later time.  John Jordan was an Ensign in Captain George McAfee’s Company in the War of 1812.  He was in the group of Kentuckians who fought in the Battle of New Orleans.  Gabriel Slaughter, a Mercer Countian, was the Lieutenant-Colonel.  The Quartermaster General did not deliver promised supplies to his regiment, and private funds were used to purchase boats for the trip down the Mississippi River.  Many soldiers had no weapons, and of the few guns in their possession, many of them would not fire.  Despite all obstacles, including being outnumbered, Andrew Jackson’s forces were successful.  Units from Kentucky and Tennessee, including Slaughter’s regiment, bore the brunt of the British attack.  Fortunately, John Jordan was one of those who survived the battle and returned home to his family.

The children’s marriages are as follows:

Garrett’s marriage bond was from Mercer County, the remaining were from Anderson County.

After his marriage in December of 1853, John D. Jordan lived long enough to have one son.  He died August 11, 1855, in Lawrenceburg – a victim of the cholera epidemic occurring that summer.  From August 7 to the 23rd cholera raged, taking 29 victims.  John Jordan’s wife, Almeda, died on the 20th, nine days after her husband.  Being so young, he left no will.  In order Book F, page 83 of the Anderson County Court records, dated October 8, 1855, I found the following:

‘On the motion of James P. Jordan, letters of administration granted him upon the estate of John D. Jordan, deceased, who took oath and with Armistead Miller and John M. Jordan, his securities, who were approved by the court, executed covenant, according to law, and on his further motion James M. Settles, G. W. Matthews and John F. Mill (any two of whom first sworn may act) he and they are hereby appointed appraisers of said estate, who will report to this court.’

‘Ordered that James P. Jordan be appointed guardian of James A. Jordan, infant child of John D. Jordan, deceased, under 14 years, who took oath and with Armistead Miller and John M. Jordan as his securities, approved by the court, executed covenant according to law.’

John left one son, James A., named for his brother.

Daughter Mary died in 1856 at the age of 33, of consumption.  She never married.

Marillis died April 10, 185?.  Since her gravestone broke, and has been repaired, it is difficult to read the year.  I checked all available death records for Anderson County, 1853-59, but did not see her listed.  Perhaps she died while visiting?  It is possible the information did not get added to the death records.

The name Amaryllis is occasionally given to girls – perhaps Marillis was a shortened version?  Two of her children, Garret and Elizabeth named children after their mother.  And perhaps daughter Mary A.’s middle name was Amaryllis.

The Civil War brought the family into its midst.  Son James P. Jordan enlisted with the Confederate Army.  He was Captain of Company F, 5th Kentucky Cavalry.  He died June 7, 1863.  In Order Book F, page 423, father John M. Jordan is ‘appointed guardian of James Jordan, infant, under 14 years of age, of James P. Jordan, deceased.’  It further says that ‘Margaret Jordan, widow of same, appearing in court and waving her right to administer.’

John Jordan lived until 1868 before passing away at the age of 79.  His will, found in Will Book B, pages 18-19, in Anderson County, lists nine of his ten children, or their descendants.  Daughter Mary, is the only one not listed since she left no descendants.

I, John M. Jordan, of Anderson County, Kentucky, being of sound mind and memory 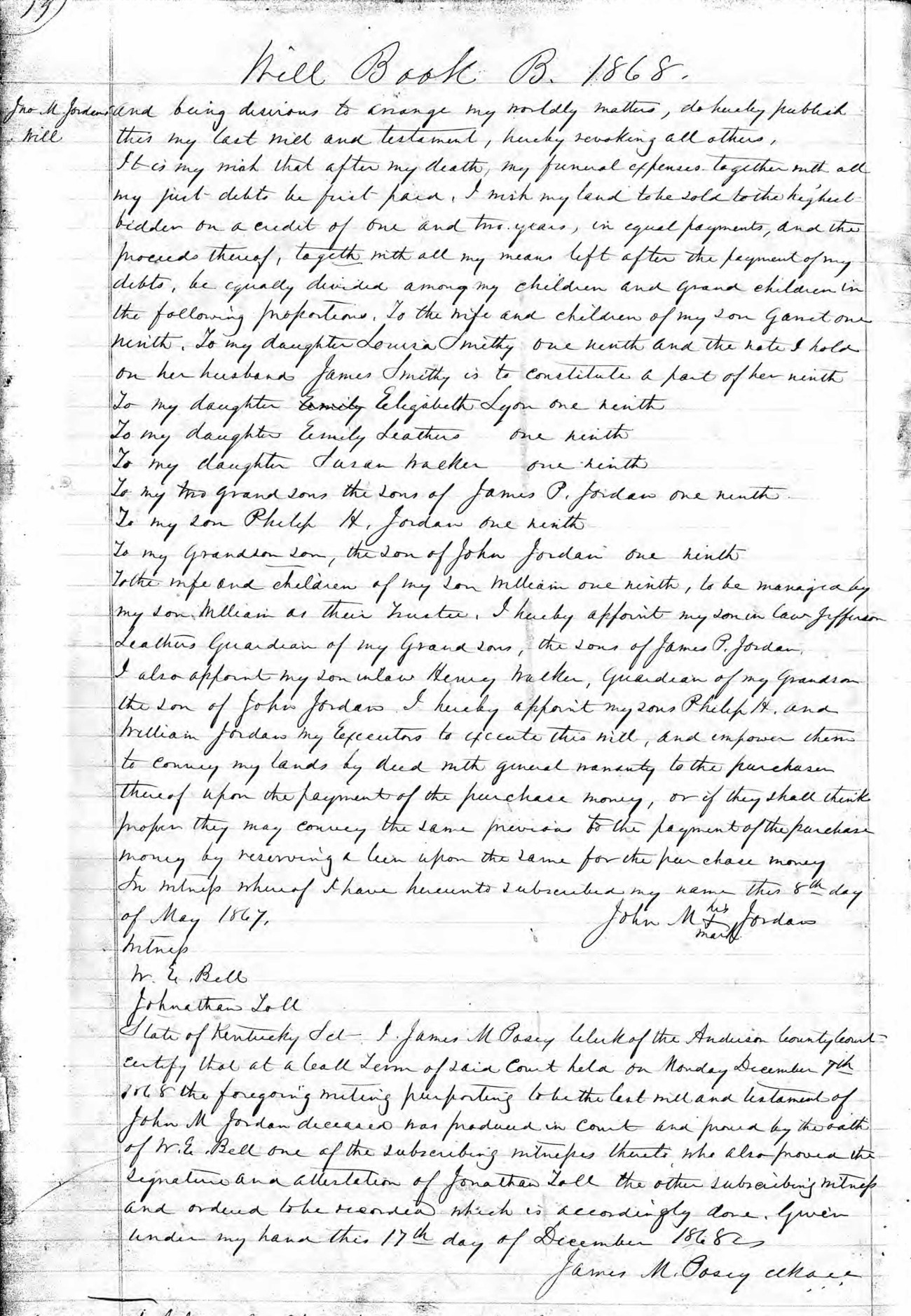 And being desirous to arrange my worldly matters, do hereby publish this my last will and testament, hereby revoking all others.  It is my wish that after my death, my funeral expenses, together with all my just debts, be first paid.  I wish my land to be sold to the highest bidder on a credit of one and two years, in equal payments, and the proceeds thereof, together with all my means left after the payment of my debts, be equally divided among my children and grand-children in in the following proportions.

To the wife and children of my son Garrett, one-ninth.

To my daughter Louisa Smithy, one-ninth and the note I hold on her husband James Smithy is to constitute a part of her ninth.

To my daughter Elizabeth Lyen, one-ninth.

To my daughter Emily Leathers, one-ninth.

To my daughter Susan Walker, one-ninth.

To my two grandsons, the sons of James P. Jordan, one-ninth.

To my grandson, the son of John Jordan, one-ninth.

State of Kentucky – I, James M. Posey, Clerk of the Anderson County Court, certify that at a Fall Term of said Court, held on Monday, December 7th, 1868, the foregoing writing purporting to be the last will and testament of John M. Jordan, deceased, was produced in Court and proved by the oath of W. E. Bell, one of the subscribing witnesses thereto, who also proved the signature and attestation of Jonathan Loll, the other subscribing witness and ordered to be recorded, which is accordingly done.  Given under my hand this 17th day of December 1868.

Margaret Jordan, widow of James P., married W. G. Driskill, January 21, 1869, at W. E. Jordan’s (her brother-in-law).  In the 1870 census they are both listed as 32.  Phillip, age 9, lives with them, under the name Driskill.  Since the couple had been married just over a year, this was the younger son of Margaret’s first husband, James P. – named for his father, James Phillip Jordan.  Elizabeth, 8/12, listed is the daughter of William and Margaret.  James A. Jordan, son of John and Almeda is living with his uncle, Phillip Jordan and wife, Fannie, in 1870, in Mercer County, along with Thomas Jefferson Jordan, oldest son of James P. and Margaret, who was born May 15, 1859.

I found no additional information on deaths of the family in later records.