By Kentucky Kindred Genealogical Research on August 27, 2018 • ( Leave a comment )

Nothing has left me more puzzled in research on a family, and still have found so much information.  Three gravestones stand in Calhoun Cemetery in McLean County.  My husband Ritchey visited his sister earlier in the month and stopped by the cemetery to photograph several of the stones.  John W. Rollins, his daughter Sarah Rollins, and wife Sarah Rollins are buried in a row, the daughter between her parents.

In the 1850 census of McLean County John was 50, a millwright, born in Pennsylvania.  Wife Sarah was 48, born in Kentucky; daughter Sarah was 8.

A millwright, in the 19th century, was a specialized carpenter who designed and constructed mills.  They had a working knowledge of driveshafts, bearings, gearings and mechanical bells.  They executed every type of engineering operation in the construction of mills – designed the patterns of the water wheel systems, carved the gear mechanisms and erected the mill machines.  Since this was such a specialized job I’m sure they stayed busy.  In the 1864 IRS schedules John W. Rollins income was $1,195 – only six men in the county had higher incomes.  He paid a 5% tax of $59.75.

Death came to visit the family in the summer of 1858, claiming daughter Sarah, aged 16.  I could find no death records for McLean County, although most counties in Kentucky did keep sporadic records at that time. 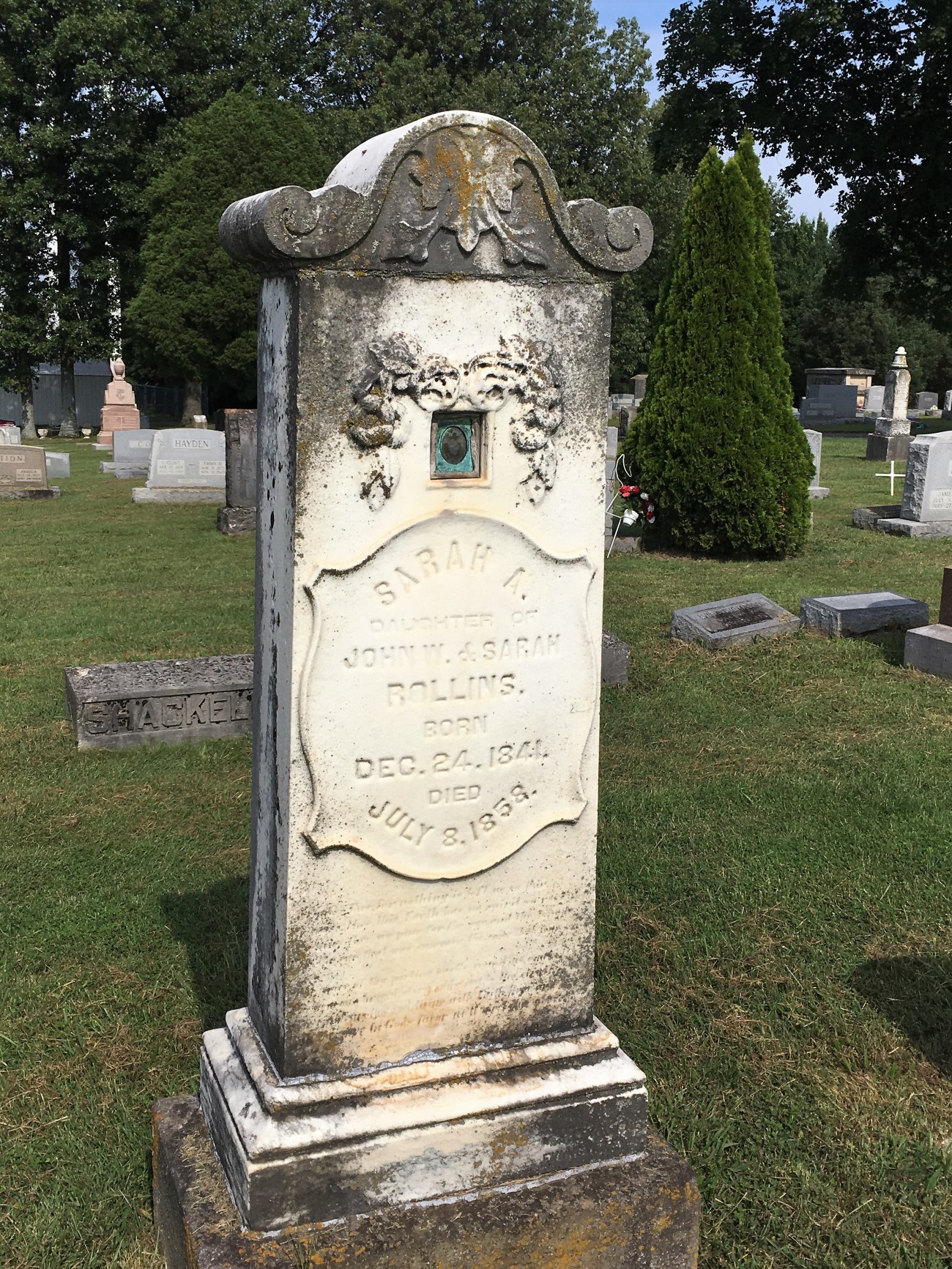 You can tell by her gravestone how much this young woman was loved.  A garland of flowers and leaves surround what at one time was her photograph.  Over the last one hundred and sixty years the rain and weather have reduced it to something unrecognizable.  A two-stanza verse is now very faint.

In December of 1869 John Rollins came down with pneumonia.  It proved fatal; he died just before Christmas.  At the top of his gravestone is the square and the compass, sign of a Freemason.

Sarah lasted a year and a half before dying at the age of 62.  Was it from sadness losing her husband and daughter?  Her stone has a star, a symbol of divine guidance.

Did John and Sarah have other children?  In the 1860 census the two are listed in the census.  I could not find them in the 1840 census

Neither John or Sarah left a will – perhaps because there was no one to leave anything to except each other?  On February 8, 1870, S. J. Boyd, attorney, was appointed administrator for John.  Louis L. Moore, William Noland and C. G. Smallhouse were appointed appraisers of his estate.  The interesting items from this appraisement were a clock, one lot of books valued at $15, a Masonic chest for $10, 2 maps at $5, various tools used in his trade.  Property set aside for the benefit of his widow included ‘two bedsteads and bedding, all the carpet in the house, cooking stove and utensils, the Bible, kitchen items, all the wearing apparel’.

Sarah bought several things at the sale – a clock, bureau, the Masonic chest.

When Sarah died in May 1871, less than a year after her husband, her appraisement and sale was held on July 29th and 31st 1871, everything was sold – including a gold watch for $70, the family Bible, all beds and other furniture.  And no one with the last Rollins purchased a thing.  Sarah’s appraisement included $528.50, $66 in silver, $2 in gold, a ladies’ gold watch and chain for $50, locket and earrings for $10.  It makes me think there were no other children, no one to inherit.  The sale total was $442.63.  Too sad.  If anyone knows of other children I would love to have that information.