1786 Will of William Vancleave – Mercer County

By Kentucky Kindred Genealogical Research on September 30, 2018 • ( Leave a comment ) 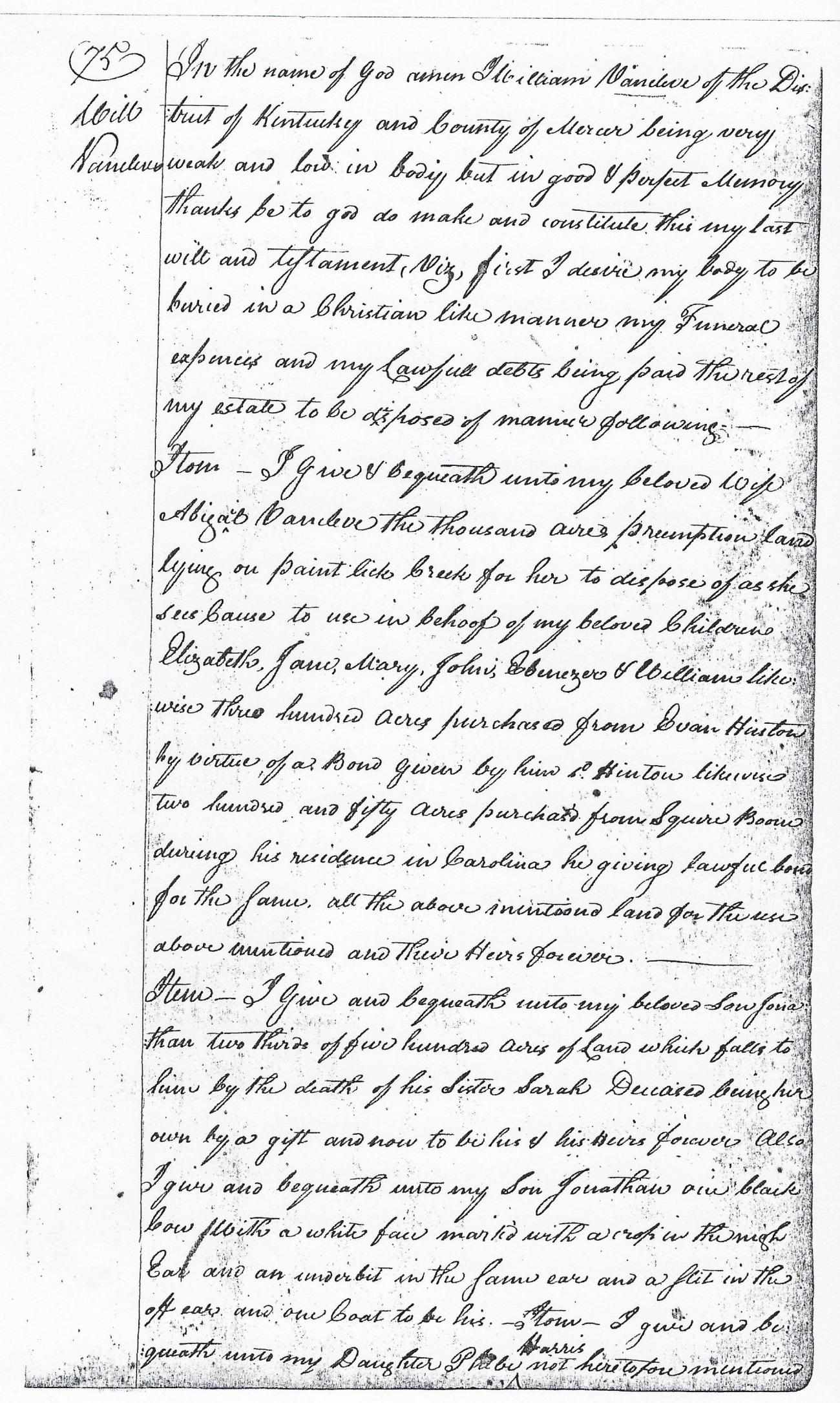 Will of William Vancleave

In the name of God, amen.  I, William Vancleave of the District of Kentucky and County of Mercer, being very weak and low in body, but in good and perfect memory thanks be to God, do make and constitute this my last will and testament.

First, I desire my body to be buried in a Christian-like manner, my funeral expenses and my lawful debts being paid, the rest of my estate to be disposed of in manner following.

Item – I give and bequeath unto my beloved wife, Abigail Vancleave, the thousand acres preemption land lying on Paint Lick Creek for her to dispose of as she sees cause to use in behoof of my beloved children – Elizabeth, Jane, Mary, John, Ebenezer and William.  Likewise, the three hundred acres purchased from Evan Hinton by virtue of a bond given by him, said Hinton, likewise two hundred and fifty acres purchased from Squire Boone during his residence in Carolina, he giving lawful bond for the same.  All the above mentioned land for the use above mentioned and their heirs forever.

Item.  I give and bequeath unto my beloved son Jonathan, two thirds of five hundred acres of land which falls to him by the death of his sister Sarah, deceased, being her own by a gift and now to be his and his heirs forever.  Also, I give and bequeath unto my son Jonathan, one black cow with a white face, marked with a crop in the right ear, and an underbite in the same ear, and a slit in the left ear and one coat to be his.

Item.  I have and bequeath unto my daughter Phoebe Harris, not heretofore mentioned

in my will, two hundred acres of land lying in Jefferson County, due to me from said Boone by virtue of a warrant that the said Boone laid for me.  I likewise give and bequeath unto my wife Abigail the full possession of all my personal estate book, debts, bonds, etc.

I likewise appoint my well-beloved friend, William Crow, and my beloved wife Abigail my lawful executors and this to be my last will and testament as witness my hand this second day of September in the year of our Lord, one thousand seven hundred and eighty-six.  Sealed and delivered in presence of us, underlined before signed.

This last will and testament of William Vancleave, deceased, was exhibited into Court and proved by the oath of Catherine Anderson, one of the witnesses thereto.

This last will and testament of William Vancleave, deceased, was fully proved by the oath of Rachel Vancleave, another of the witnesses thereto and ordered to be recorded.