By Kentucky Kindred Genealogical Research on September 4, 2019 • ( Leave a comment )

Larue County was formed from Hardin County March 4, 1843.  In January of that year, when Daniel Vittitow wrote his will, it was still part of Hardin, and he notes that at the beginning of his will.  This will is the first in the county records.

A marriage return for Daniel Vittitow and Christina Johnson (I have seen her listed as Christina Priscilla Johnson) was dated the 18th of September 1841.  This corresponds with the young daughter, Ellen, who requires ‘schooling’.  Was this a second marriage?  As old as Daniel was (he was 50 when Priscilla was born in 1816, 79 when they married), I would presume it to be.  However, no other children are mentioned in the will.  If Priscilla marries she is to receive only her third, or dower.  But the other two-thirds is not allocated.

On a message board I saw a post that Priscilla was Daniel’s second wife and was sued by his older children for ‘seducing’ him and taking his money.  It was said her next child, a son by her second husband, was named for the lawyer who won her case.

Will of Daniel Vittitow 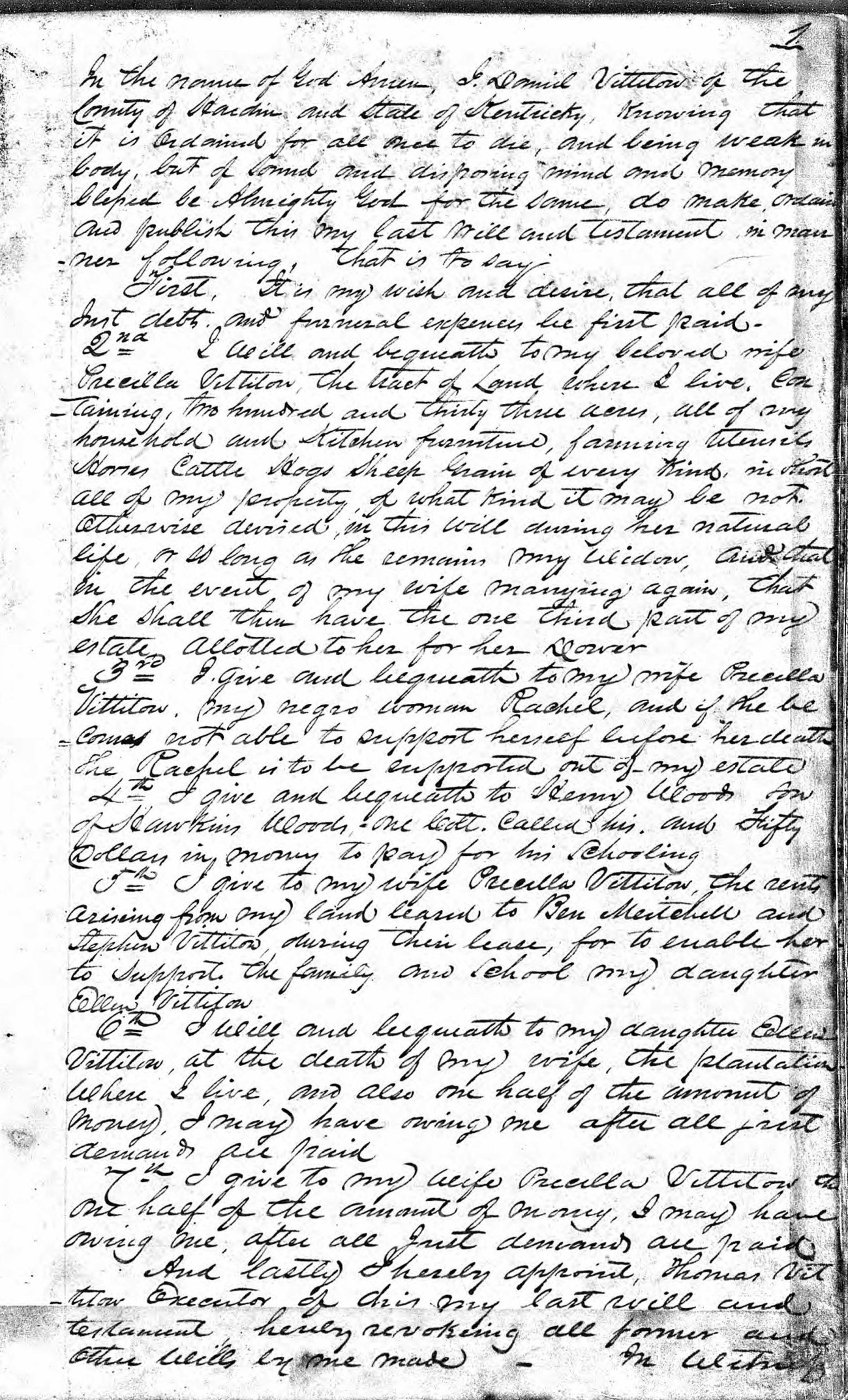 In the name of God, amen.  I, Daniel Vittitow, of the County of Hardin and State of Kentucky, knowing that it is ordained for all men to die, and being weak in body, but of sound and disposing mind and memory, blessed be Almighty God for the same, do make, ordain and publish this my last will and testament, in manner following, that is to say.

First.  It is my wish and desire that all of my just debts and funeral expenses be first paid.

Second.  I will and bequeath to my beloved wife, Priscilla Vittitow, the tract of land where I live, containing two hundred and thirty-three acres, all of my household and kitchen furniture, farming utensils, horses, cattle, hogs, sheep, grain of every kind, in short, all of my property of what kind it may be not otherwise devised in this will, during her natural life, or so long as she remains my widow.  And that in the event of my wife marrying again that she shall have the one third part of my estate allotted to her for her dower.

Third.  I give and bequeath to my wife Priscilla Vittitow my Negro woman Rachel, and if she becomes not able to support herself before her death, she, Rachel, is to be supported out of my estate.

Fourth.  I give and bequeath to Henry Woods, son of Hawkins Woods, one colt called his, and fifty dollars in money to pay for his schooling.

Fifth.  I give to my wife Priscilla Vittitow the rents arising from any land leased to Ben Mitchell and Stephen Vittitow, during their lease, for to enable her to support the family and school my daughter Ellen Vittitow.

Sixth.  I will and bequeath to my daughter, Ellen Vittitow, at the death of my wife, the plantation where I live, and also one half of the amount of money I may have owing me after all just demands are paid.

Seventh.  I give to my wife, Priscilla Vittitow, the one-half of the amount of money I may have owing me, after all just demands are paid.

And lastly thereby appoint Thomas Vittitow, Executor, of this my last will and testament, hereby revoking all former and other wills by me made.  In witness 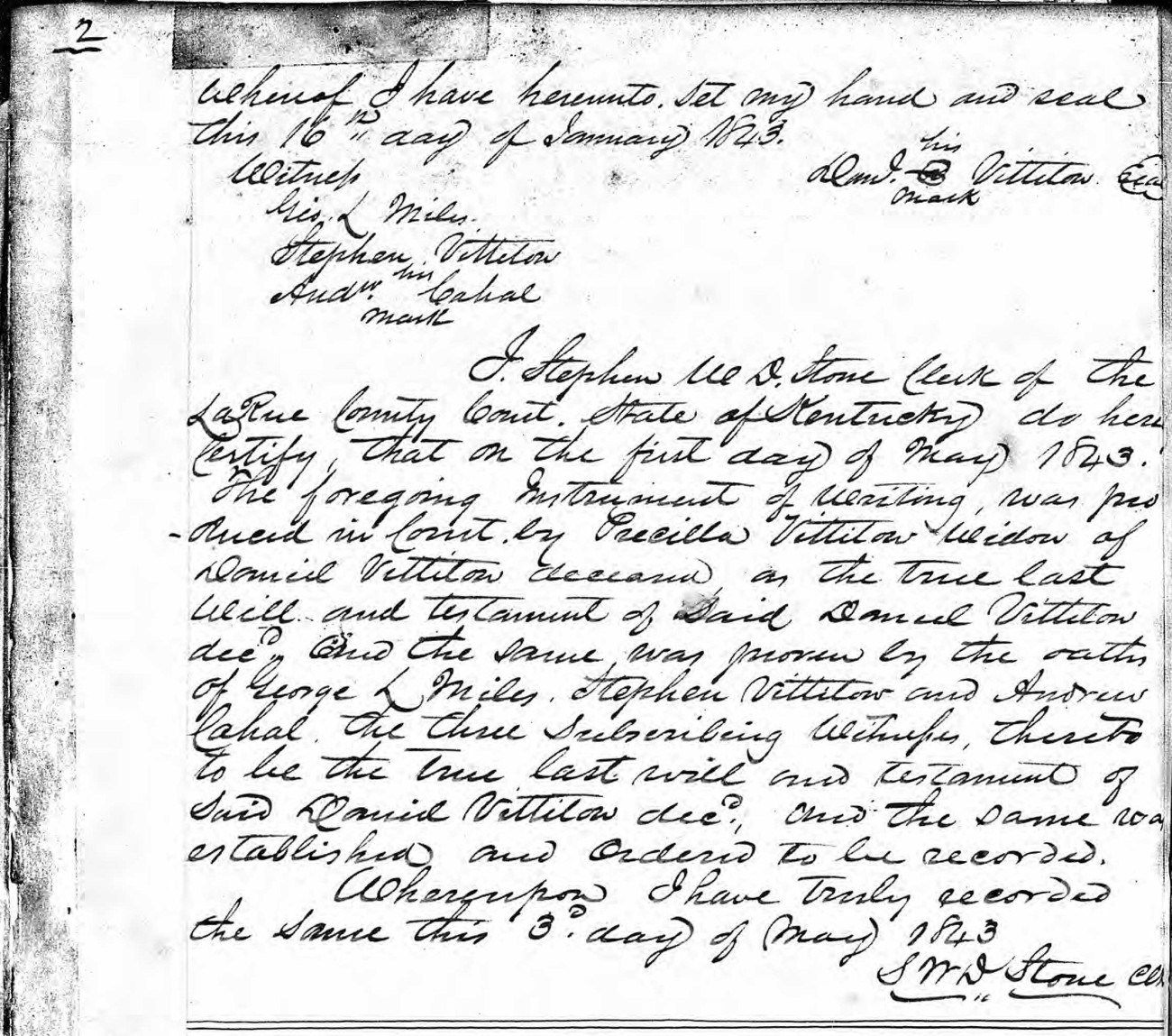 whereof I have hereunto set my hand and seal this 16th day of January 1843.

Whereupon I have truly recorded the same this 3rd day of May 1843.