By Kentucky Kindred Genealogical Research on October 1, 2018 • ( Leave a comment ) 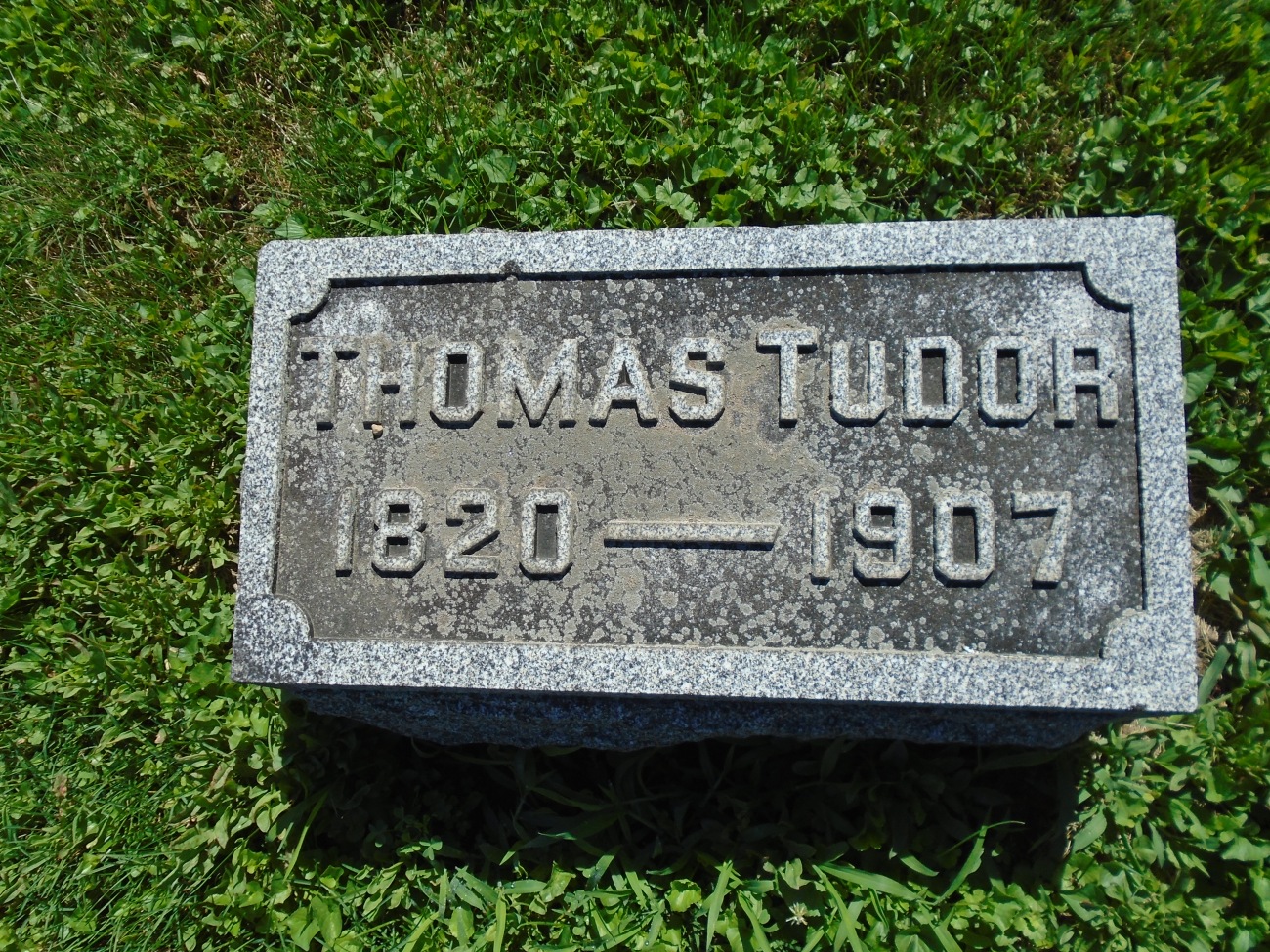 After all these years of genealogy research I’m still amazed at what can be found with just a small bit of information.  I started with a photo of the gravestone of Thomas Tudor, 1820-1907, located in Mt. Olivet Cemetery in Robertson County, Kentucky.  My first thought, since Thomas died after 1885, was to check for an obituary.  In the Maysville newspaper of March 6th of that year is the following: 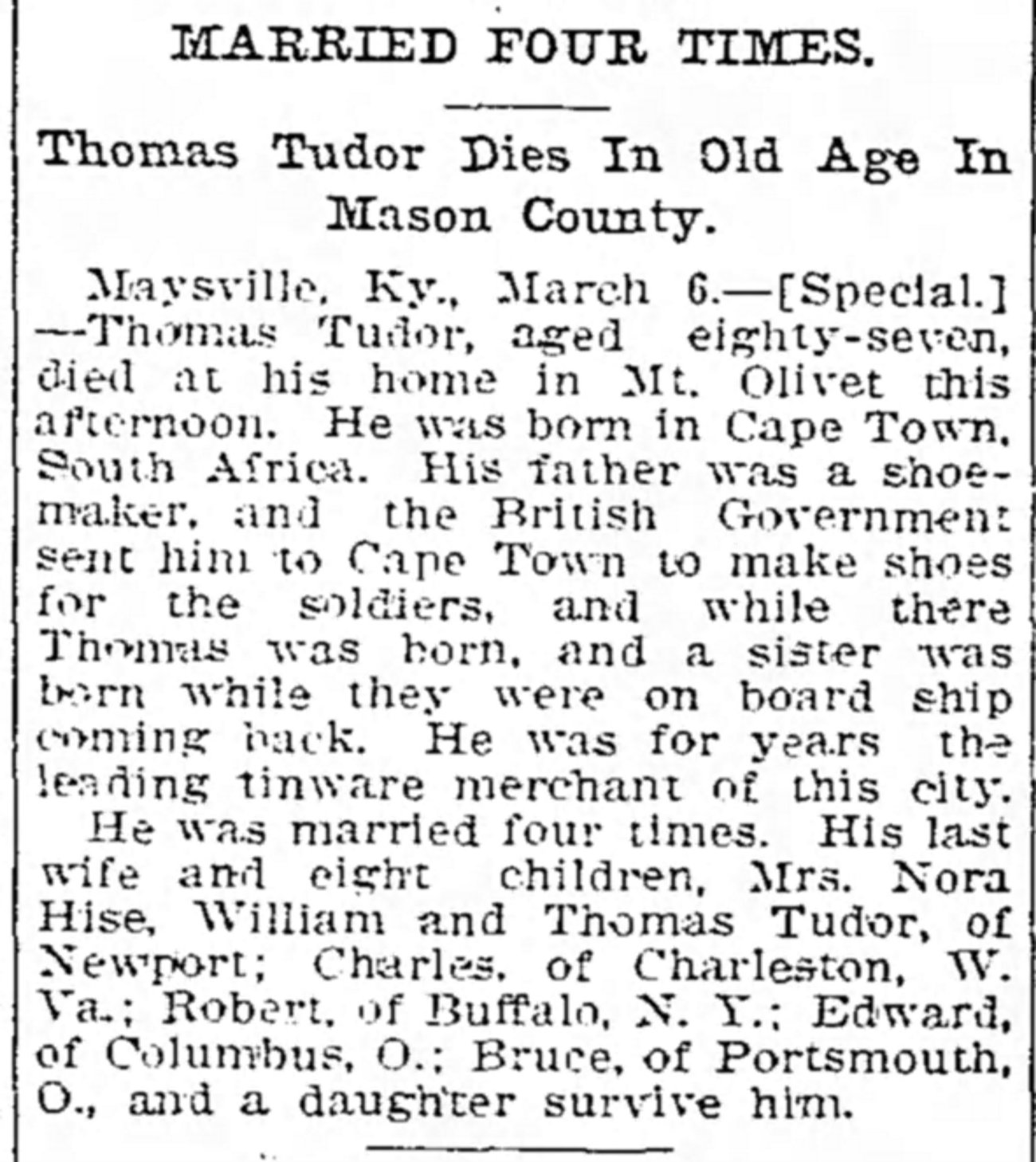 ‘Thomas Tudor, aged eighty-seven, died at his home in Mt. Olivet this afternoon.  His father was a shoemaker, and the British Government sent him to Cape Town to make shoes for the soldiers, and while there Thomas was born, and a sister was born while they were on board ship coming back.  He was for years the leading tinware merchant of this city.

‘He was married four times.  His last wife and eight children, Mrs. Nora Hise, William and Thomas Tudor, of Newport; Charles, of Charleston, W. Virginia; Robert, of Buffalo, N.Y.; Edward, of Columbus, Ohio; Bruce, of Portsmouth, Oregon, and a daughter survive him.’

In those two short paragraphs we learn so much about his man.  He was born in Cape Town, South Africa!  What few people in Kentucky – especially at that time – could claim that birth place?  And his sister was born on the voyage home.  And he had four wives.

Next, I checked census, marriage and other records, in addition to more newspapers. 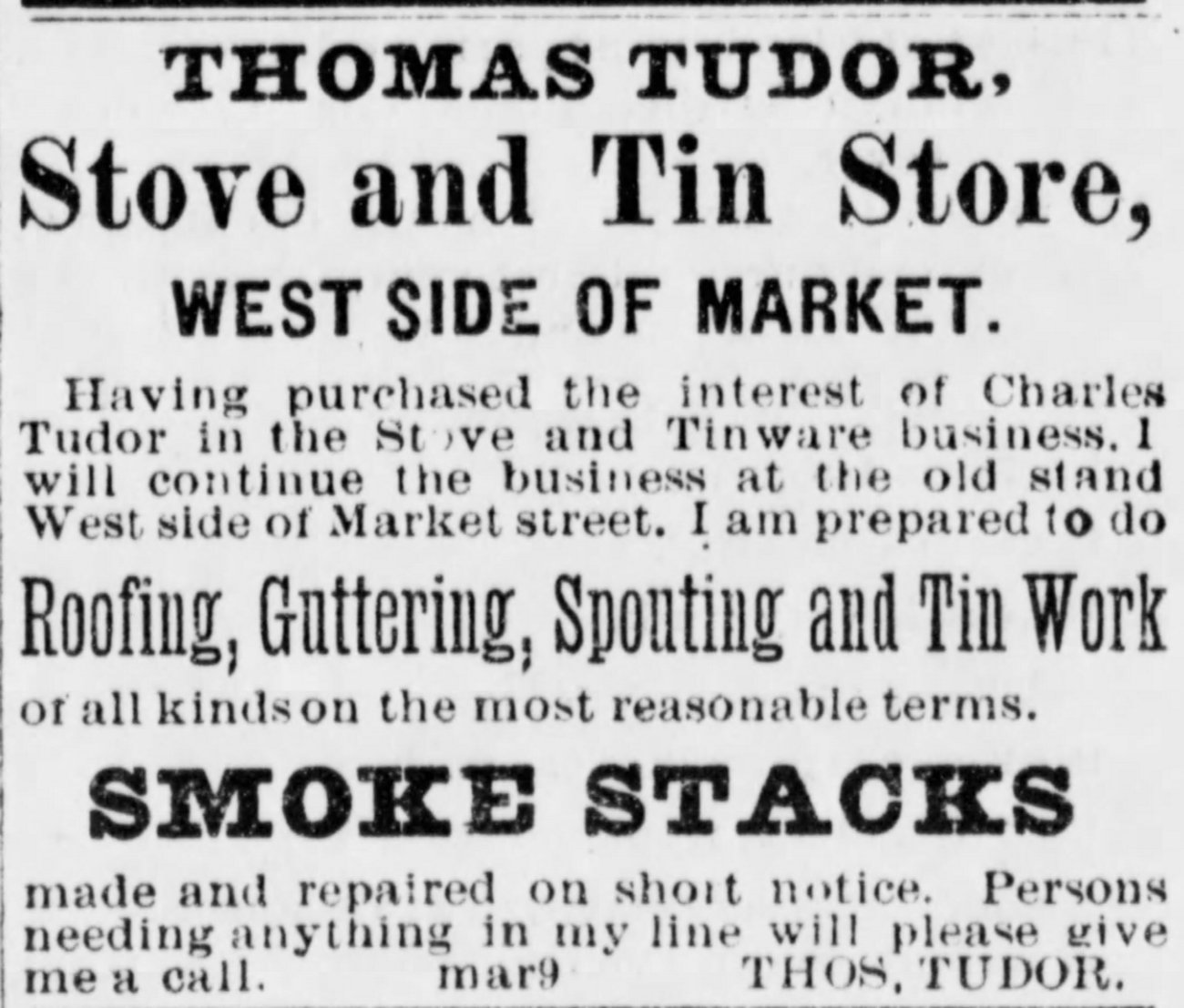 A March 1882 edition of The Evening Bulletin carried an advertisement for his stove and tinware business. 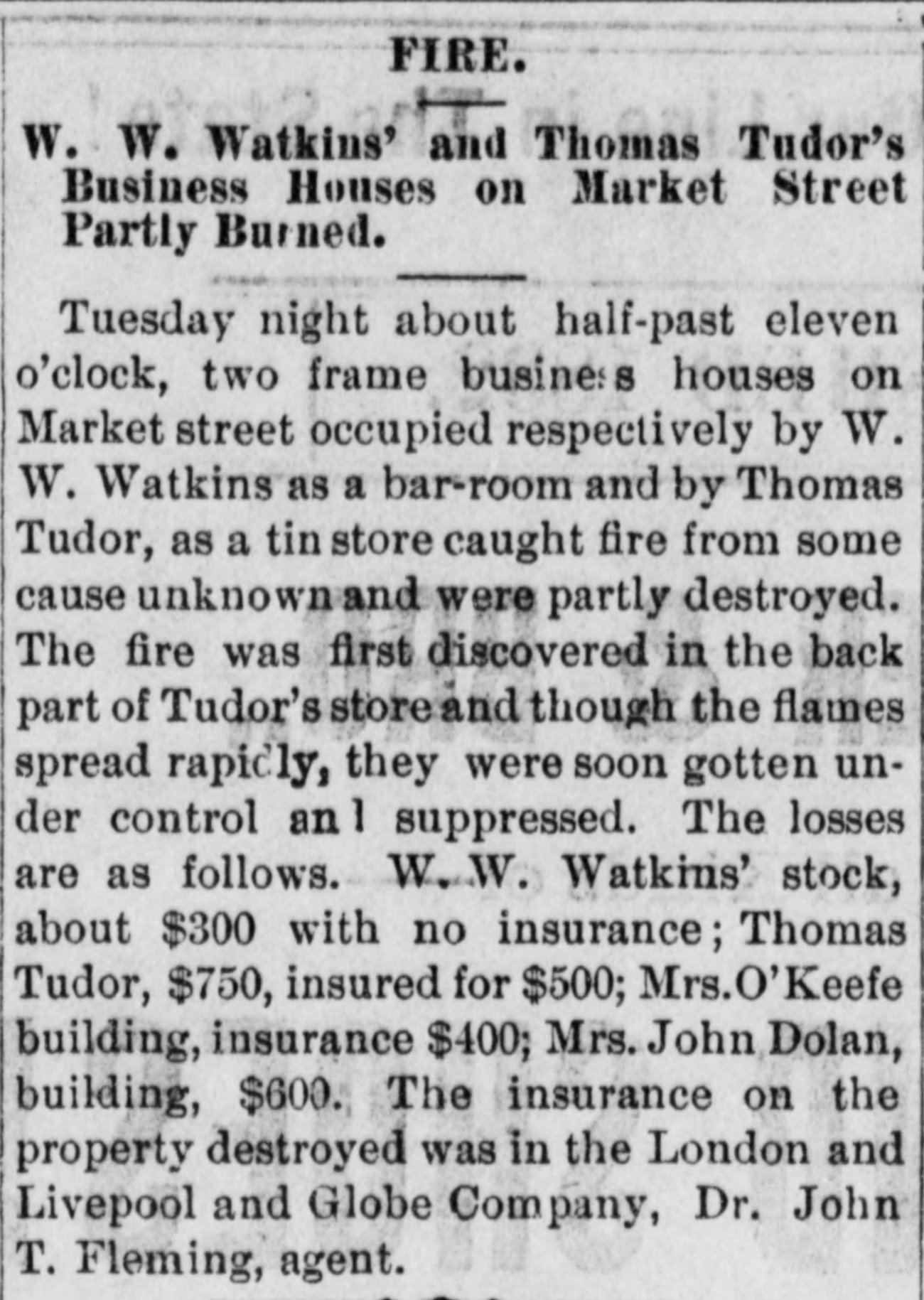 And in November of that year a fire burned part of his business and the bar-room of W. W. Watkins. 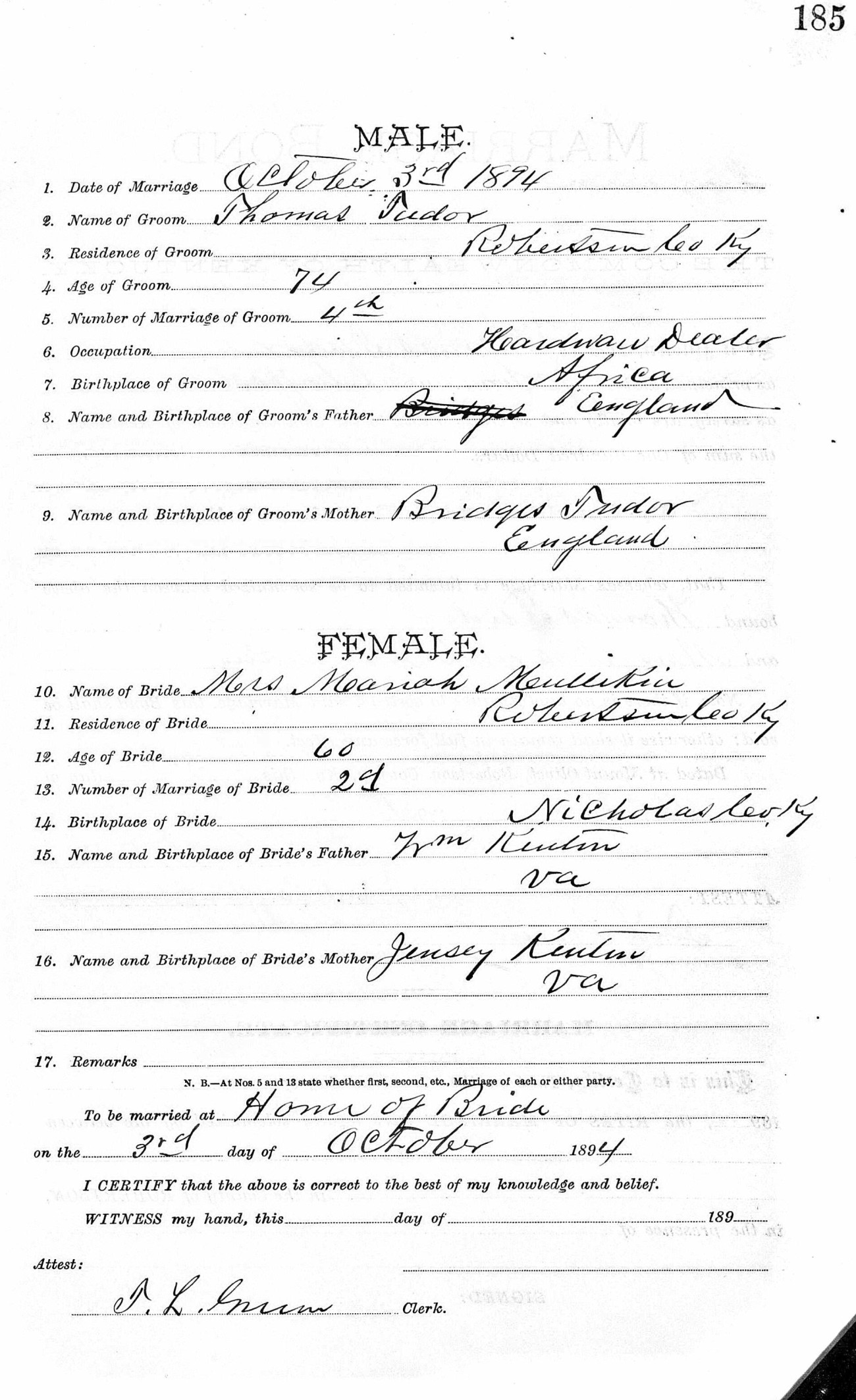 October 17, 1889, Thomas Tudor married Mrs. Serena Gardner.  She must have died shortly after their marriage, since on October 3, 1894, he married Mrs. Mariah Kenton Meullikin.

And I did find information on his sister, born during the voyage home from Cape Town – Jane Tudor Blanchard.  In 1916 she celebrated her 90th birthday.