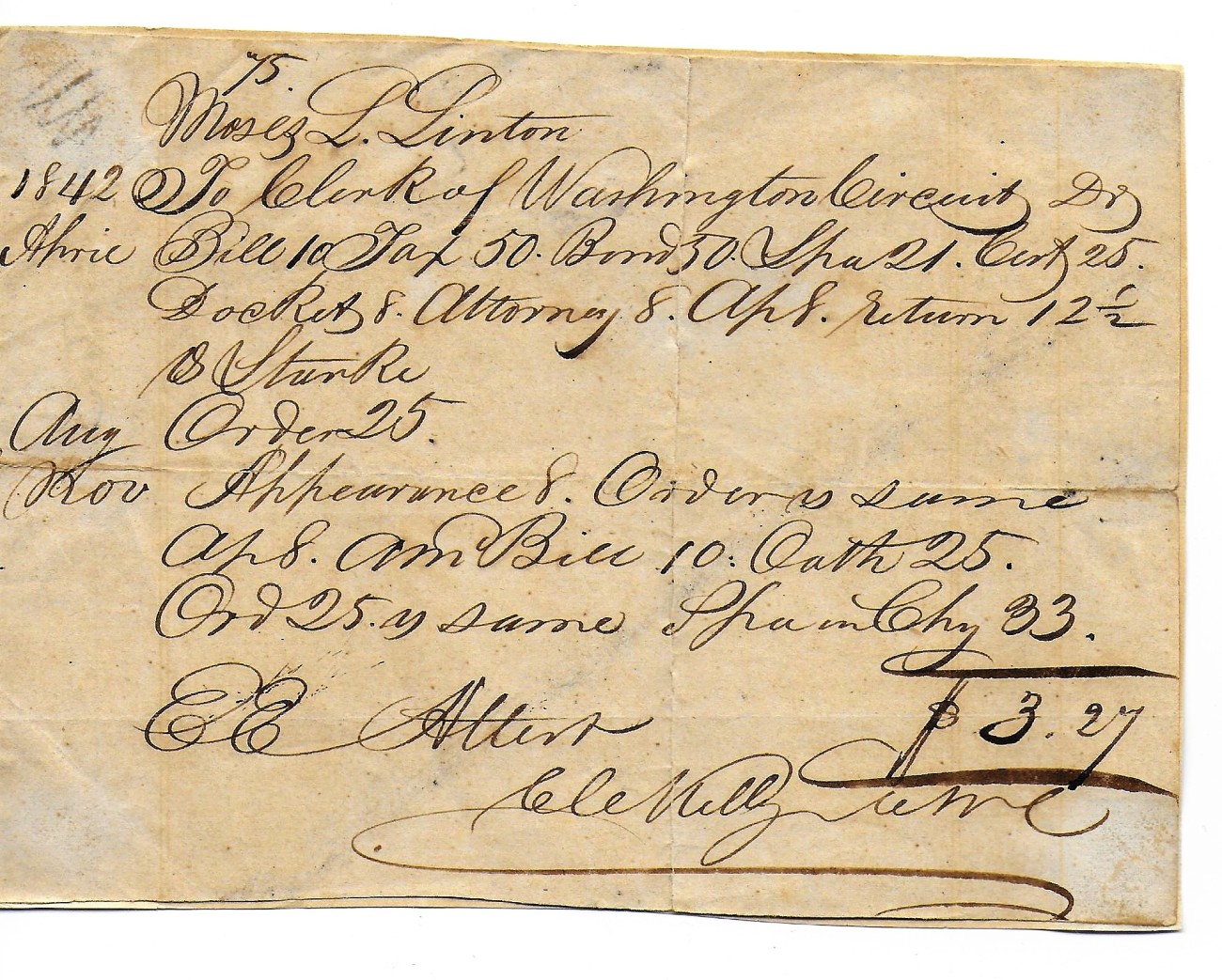 I am unsure why Frances would have this document.  Yes, she was a Linton before marriage, but this is from another line of Linton’s descended from Captain John Hancock Linton and Ann Mason.  Frances was descended from the captain’s son William Linton, her grandfather.  Dr. Moses Lewis Linton is the son of Benjamin Franklin Linton and Lucy Crewdson. William and Benjamin were brothers.  Most of Ben Franklin’s children moved with him to Logan County, but Moses remained in Washington County, then moving to St. Louis, Missouri, about 1843. 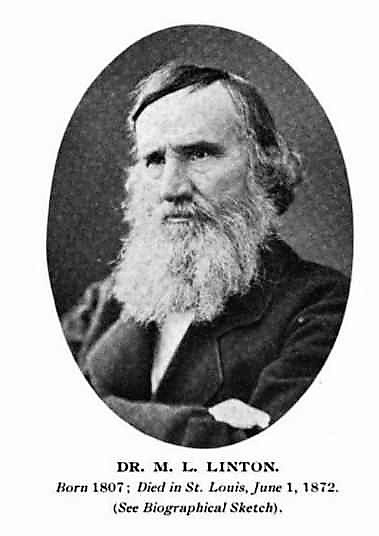 The following article, with excerpts from an account of Moses Linton’s life by his daughter Annie Linton Sawyer, comes on the 50th anniversary of the founding of the St. Louis Medical and Surgical Journal, begun by Linton in 1843.  Moses Linton accepted a professorship in the Medical Department of St. Louis University when he moved to Missouri and retained it the rest of his life. 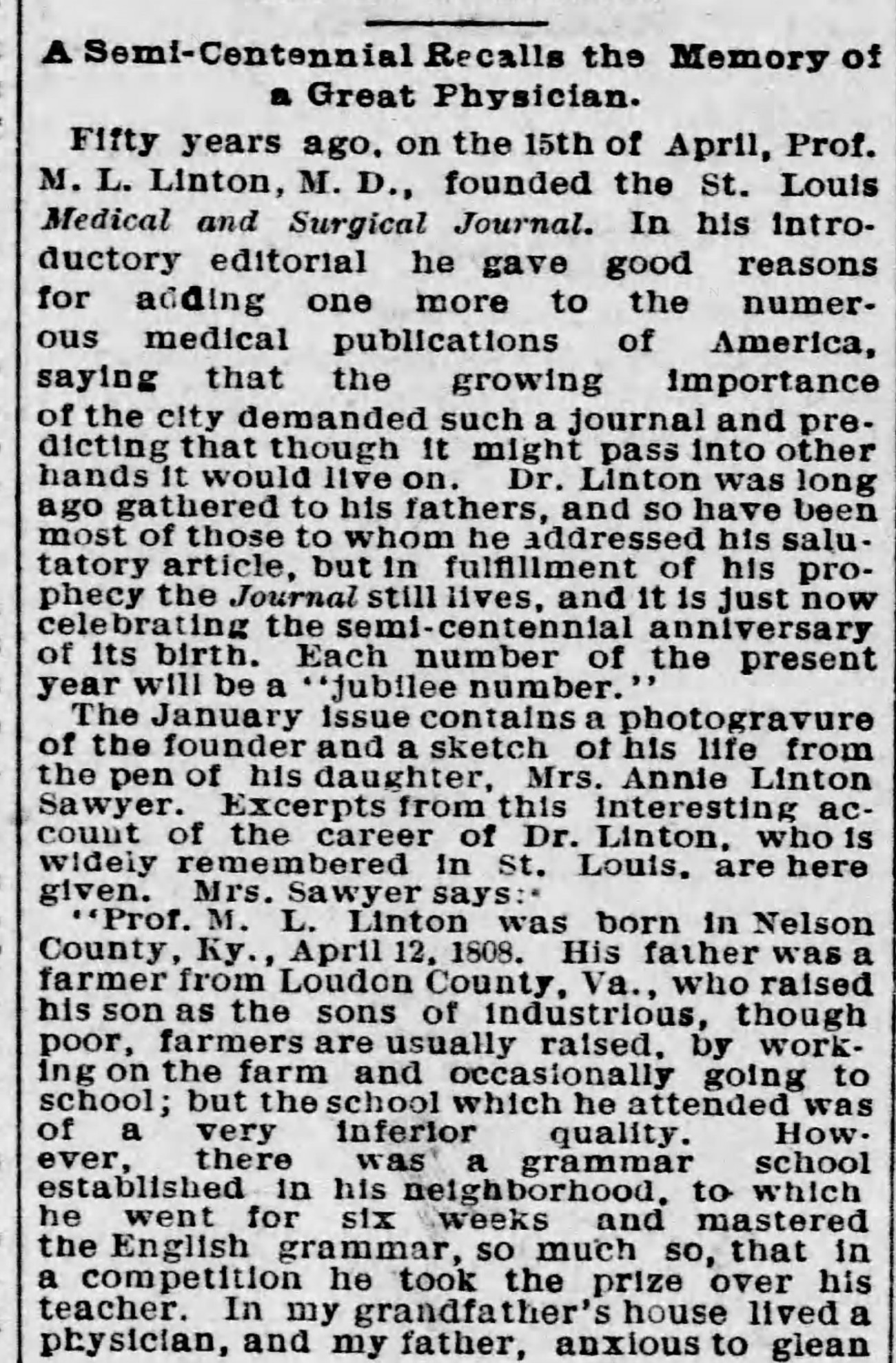 A Semi-Centennial Recalls the Memory of a Great Physician

Fifty years ago, on the 15th of April, Professor Moses Lewis Linton, M.D., founded the St. Louis Medical and Surgical Journal.  In his introductory editorial he gave good reasons for adding one more to the numerous medical publications of America, saying that the growing importance of the city demanded such a journal and predicting that though it might pass into other hands it would live on.  Dr. Linton was long ago gathered to his fathers, and so have been most of those to whom he addressed his salutatory article, but in fulfillment of his prophecy the Journal still lives, and it is just now celebrating the semi-centennial anniversary of its birth.  Each number of the present year will be a “jubilee number.”

The January issue contains a photogravure of the founder and a sketch of his life from the pen of his daughter, Mrs. Annie Linton Sawyer.  Excerpts from this interesting account of the career of Dr. Linton, who is widely remember in St. Louis, are here given.  Mrs. Sawyer says:

“Professor M. L. Linton was born in Nelson County, Kentucky, April 12, 1808.  His father was a farmer from Loudoun County, Virginia, who raised his sons as the sons of industrious, though poor, farmers are usually raised, by working on the farm and occasionally going to school; but the school which he attended was of a very inferior quality.  However, there was a grammar school established in his neighborhood, to which he went for six weeks and mastered the English grammar, so much so, that in a competition he took the prize over his teacher.  In my grandfather’s house lived a physician, and my father, anxious to glean

knowledge from every source, would read the medical books thus thrown in his way, and at once evidenced a desire to become master of their contents.  This influenced him in the choice of his profession.  While he was felling the giant oaks in a Kentucky forest to make rails to fence his father’s farm, he carried his book with him as a companion, and although for this reason the opening where the sunlight had not penetrated for centuries was slowly enlarged, he spent that physically lost time in permitting the light of learning to penetrate a brain that his youthful mind had determined should command the respect and admiration of the members of his chosen profession; and it did.

“When my father arrived at the age of manhood he went to Springfield and studied medicine under Dr. J. H. Polin, with whom he remained two years with great benefit, possessing rare advantages; for Dr. Polin not only gave him the careful instruction necessary for his profession, but instructed him in the Latin and Greek languages, which had been neglected and which are so essential to the physician and gentleman.

“After leaving Dr. Polin my father graduated at Transylvania College, Lexington, Kentucky, and commenced practicing in Hancock County, where he remained for two years.  He then went to Springfield, where he entered into partnership with Dr. Polin, his former friend and instructor.  In 1837 he became acquainted with and married Ann Rachel Booker.”

Mrs. Sawyer here relates an anecdote of her mother, telling how she refused an elegant trousseau which her father, Judge Paul J. Booker, who was wealthy, wished to give her, and asked that the money designed for its purchase be given her affianced in order that he might spend it in perfecting his education in Europe.  So, in 1839 Dr. Linton left his wife and spent one year in Europe visiting various hospitals and institutions.  He spent considerable time in Paris and became a warm friend of Dr. Charles A. Pope.  Upon his return to Kentucky he accepted a professorship in the St. Louis University, occupying the position for twenty-six years.  He was devoted to his profession and returning to it he established the St. Louis Medical Journal in 1843.

“He wrote a great deal of his meditations in a doctor’s buggy, also on religious subjects,” continues Mrs. Sawyer.  “Many beautiful poems flowed from his pen, and during the Civil War, believing the pen is mightier than the sword, he used it freely.  My father was a staunch Union man, never deeming it necessary to sacrifice principle to friendships, money or politeness, he stood for what he conceived right, and although his bank account was doubtless lighter, my pride in my father’s integrity is four-fold.  He was a firm believer in nature’s ability to cure disease in most cases.

“My father died the 1st day of June 1872, in the 65th year of his life, at his lovely home, Mamesa (his gift to my mother in remembrance of her generosity to him).  His warm friend, Dr. E. H. Gregory, and his approved son-in-law, Dr. Amos Sawyer, received his last breath.”  He was buried on the 5th of June in Calvary Cemetery.