Maplewood Cemetery, Mayfield, Graves County, Kentucky.  The Lander gravesite is on the left, in the background.

While in Graves County in March, Ritchey and I visited Maplewood Cemetery in the county seat of Mayfield.  Several of the graves had an above ground bricked site to house either one or two bodies.  Adkins Lander and his wife Penelope Boone Lander were buried in one of these bricked graves (I’m not sure that is the correct term).

Adkins (or Atkins, I’ve seen it both ways) was born in Stewart County, Tennessee, in 1841.  Adkins was a black man, most likely born a slave.  During the Civil War he enlisted with Union troops as part of the United States Colored Troops in the 8th Regiment, Company C, August 15, 1864, at Paducah, Kentucky.  He was 25 years of age, 5’ 2 ½“ in height, black complexion, black eyes and hair.  He was a farmer from Graves County. 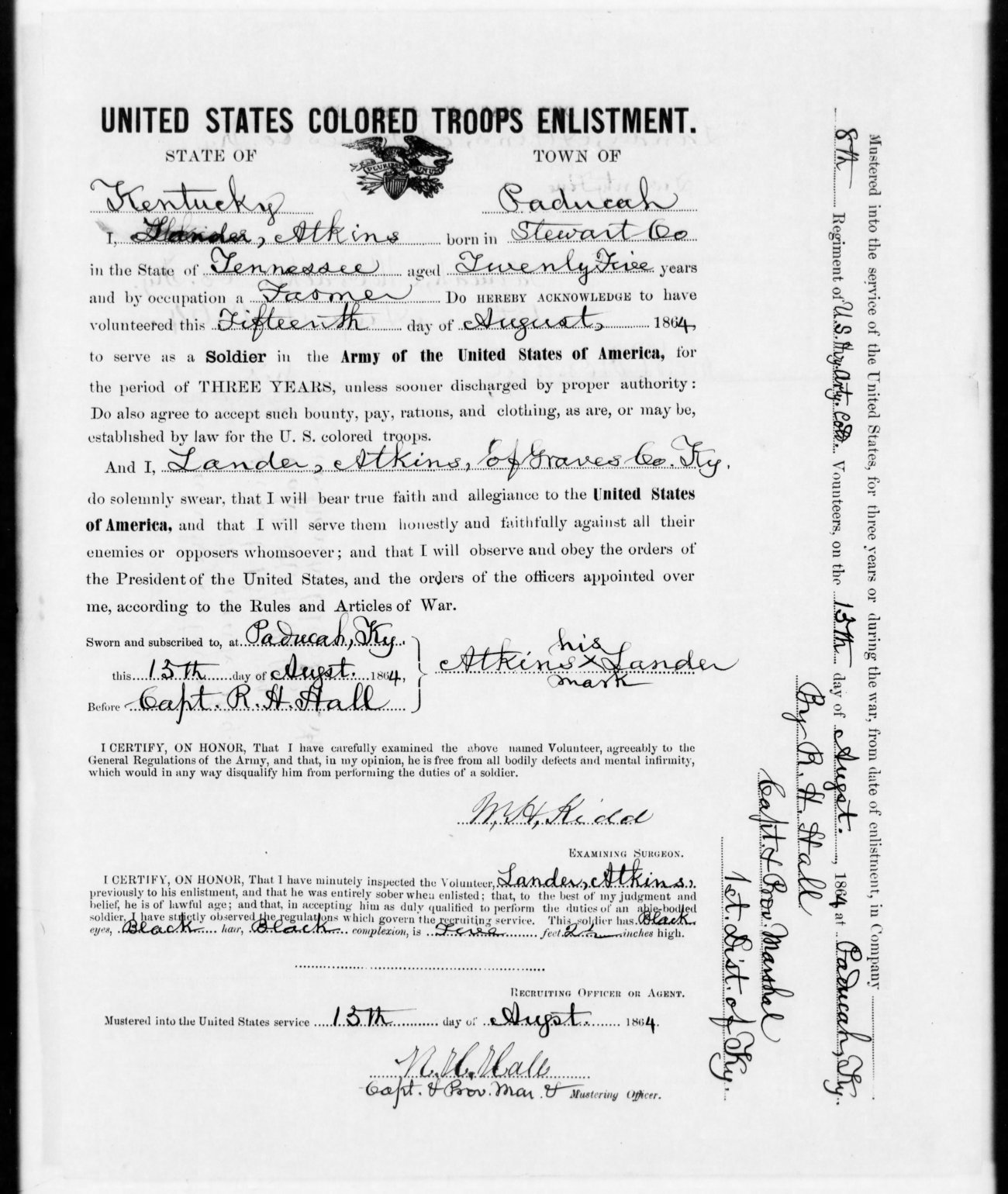 From the above enlistment record we know that Adkins couldn’t write, since he made a mark for his signature, but in the 1900 Graves County census we find that he could read.

The 8th Regiment, United States Colored Heavy Artillery, Companies A-L, had many men who mustered in from Paducah, McCracken County, Kentucky.  After battles, companies may be combined because so many men were killed or wounded.  Luckily that was not the case for Adkins Lander – he returned home to his family.

January 28, 1892, Adkins Lander started receiving a pension for his service in the Civil War.  February 12, 1915, Penelope Lander, as his widow, continued receiving funds.  This date is helpful as the gravestone gives us only the year of his death.  Penelope’s death is not listed, as happens so often when the remaining spouse dies.

I could find little information about Adkins Lander and his wife Penelope, most from the 1900 census.  The couple lived at 454 8th Street in Mayfield.  Adkins was a carpenter.  Adkins was 59 and Penelope was 58.  They had been married 35 years, which means about 1865 – probably when he returned from the war.  Adkins was born in Tennessee, as his military records show, both his parents born in North Carolina.  Penelope was born in Kentucky, as were her parents.  The couple owned their home, they owed no mortgage.  It was a house, not a farm.

Wildflowers growing on the side of the bricked grave.

At some point after 1900 Adkins and Penelope moved to Paducah.  In the 1908, 1910 and 1912 City Directories they lived at 820 N. 7th Street; Adkins is listed as a carpenter.  Penelope’s name was spelled Panellipa; it was also mangled in the census records, Pelelpa.  Adkins and Penelope had no children, this from the 1900 census.  I could find no information about Penelope’s death.