By Kentucky Kindred Genealogical Research on October 9, 2019 • ( Leave a comment )

Resting in Green Lawn Cemetery in the city of Franklin, in Simpson County, are the family of Robert DePriest Salmons. 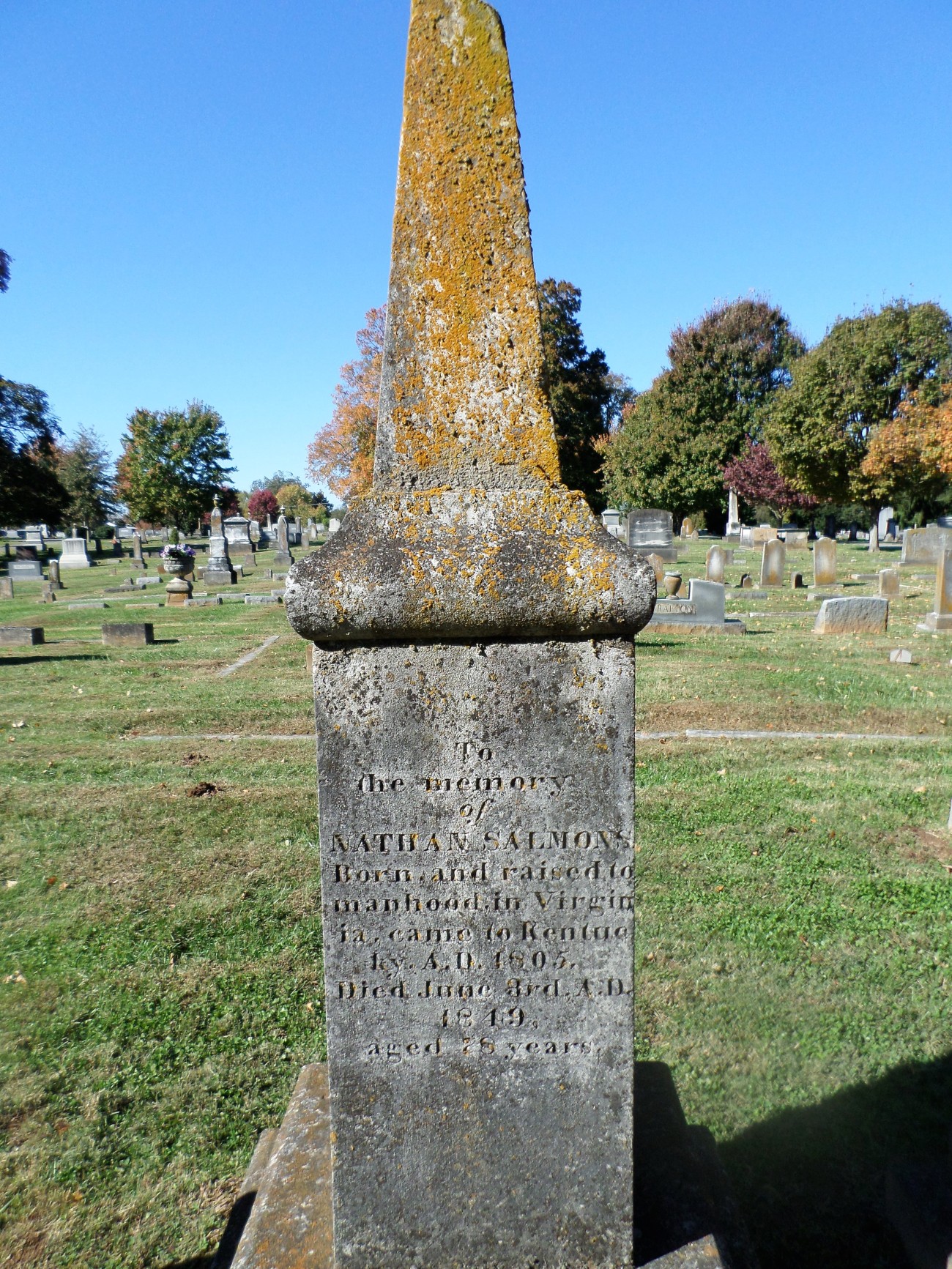 Robert was the son of Nathan DePriest Salmons and Rebecca Ann Ryan.    Robert married Elizabeth Kerr Buntin about 1840 as their first child was born in 1841.  The couple and their children appear in the 1850 census of Simpson County, through 1880.  Robert was a merchant in 1850, and beginning in 1860 was a railroad agent.  Even though the newspaper article at the end of this blog says they were a family of seven children, four sons and three daughters, that is not quite correct.  Two children died in infancy.  The children are as follows:

Robert DePriest Salmons, Jr., was born between census records.  His stone has no dates, making it impossible to even guess the year he was born or died.

Robert Salmons was four years of age in the 1860 census.  Since she was not in the next census, we can guess that her death was before 1870.

Allison was a 1st Sergeant in Company I of the 6th Kentucky Infantry, Orphan Brigade, Confederate States Army, 1841-1873.  Did he die from wounds of sickness from the war? 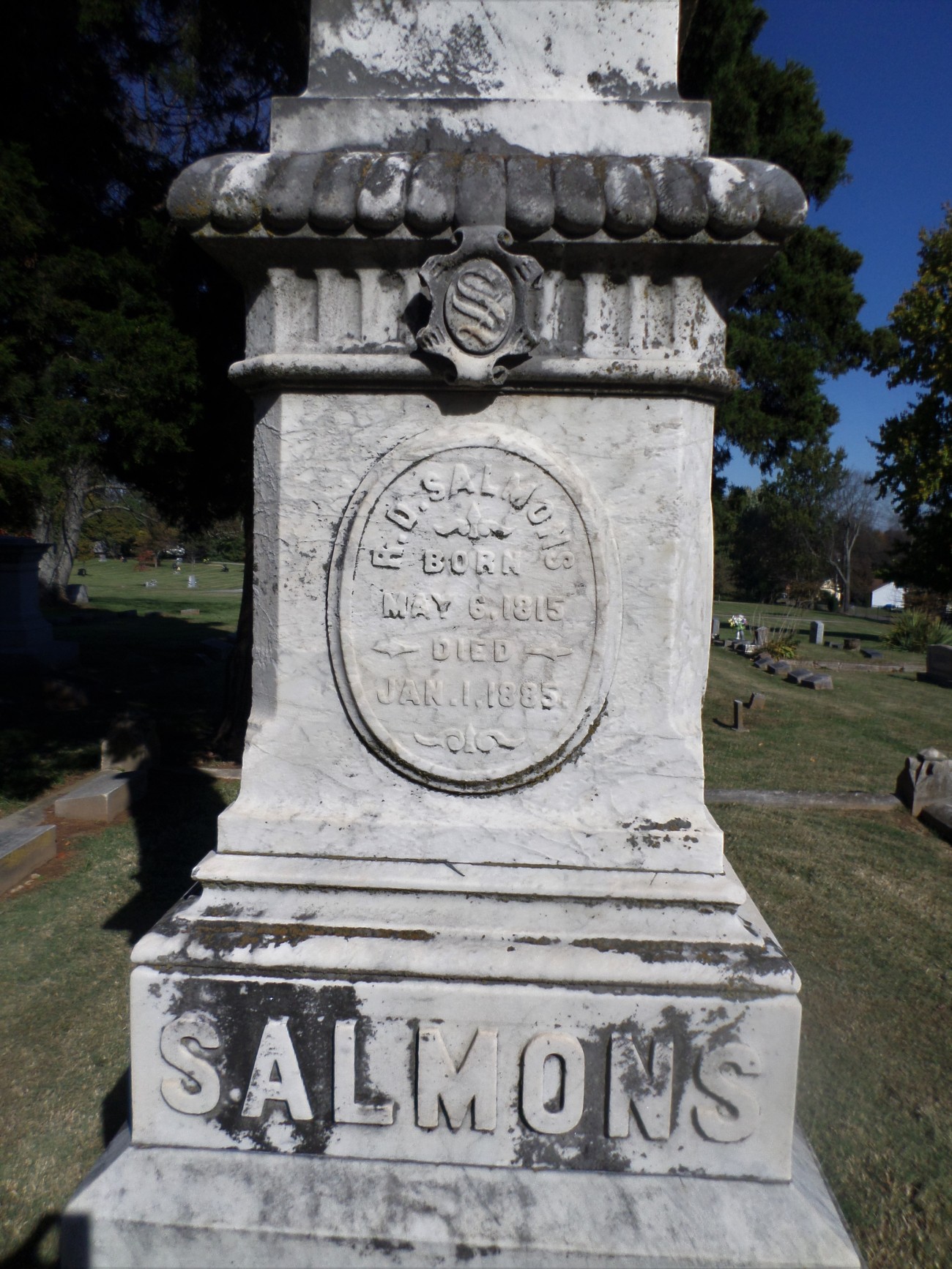 Franklin, Kentucky, January 1 – Col. R. D. Salmons died at his residence in this city this afternoon, after a protracted illness of some weeks.  He was one of Franklin’s oldest and most highly-respected citizens, and many will be the regrets expressed at his demise. 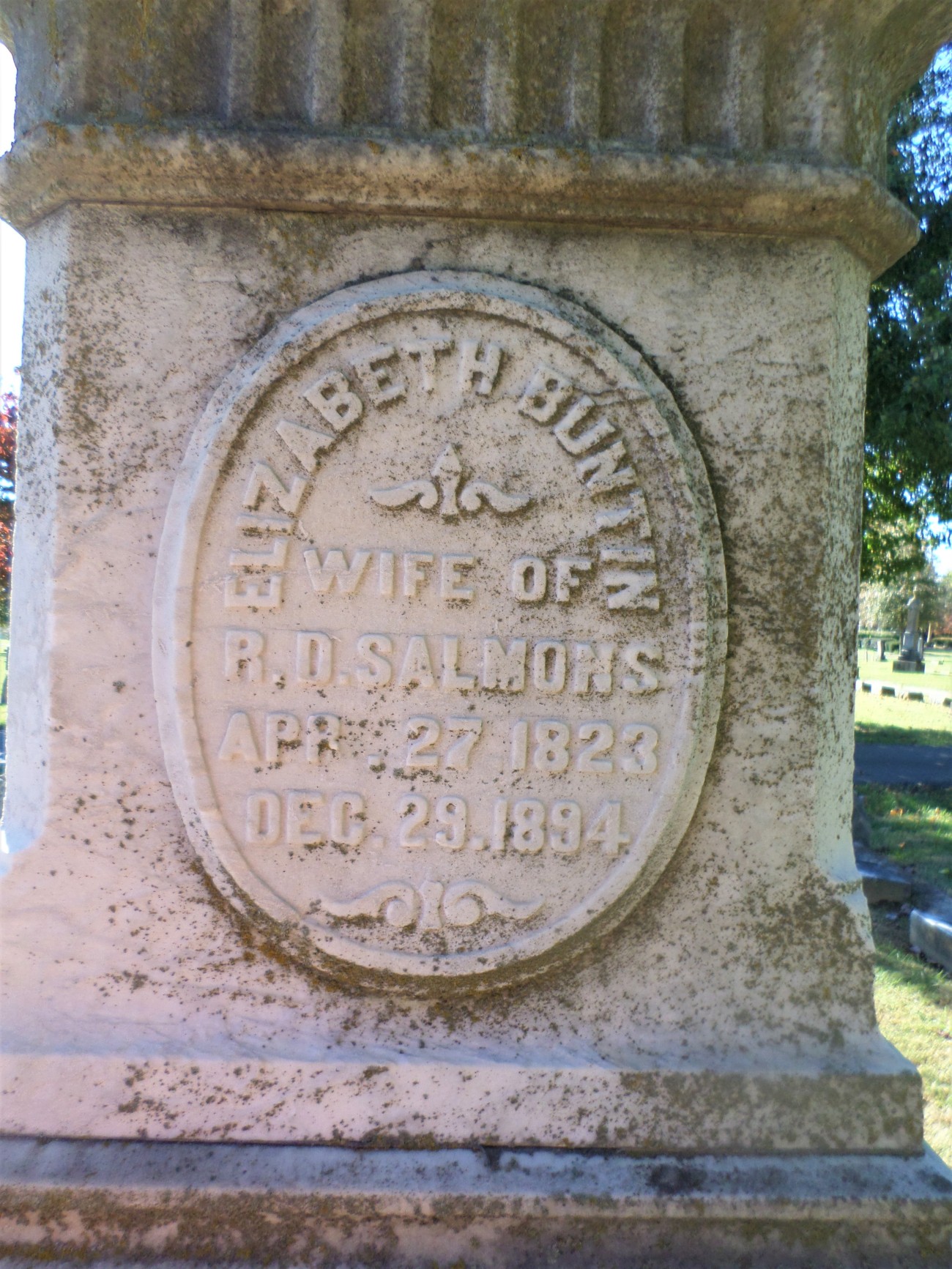 Elizabeth lived nine years after the death of Robert.

Mary A. Salmons died in 1895 at the age of 47.  She is probably the ‘Mollie’ mentioned in the article who married a Mr. Kelley. 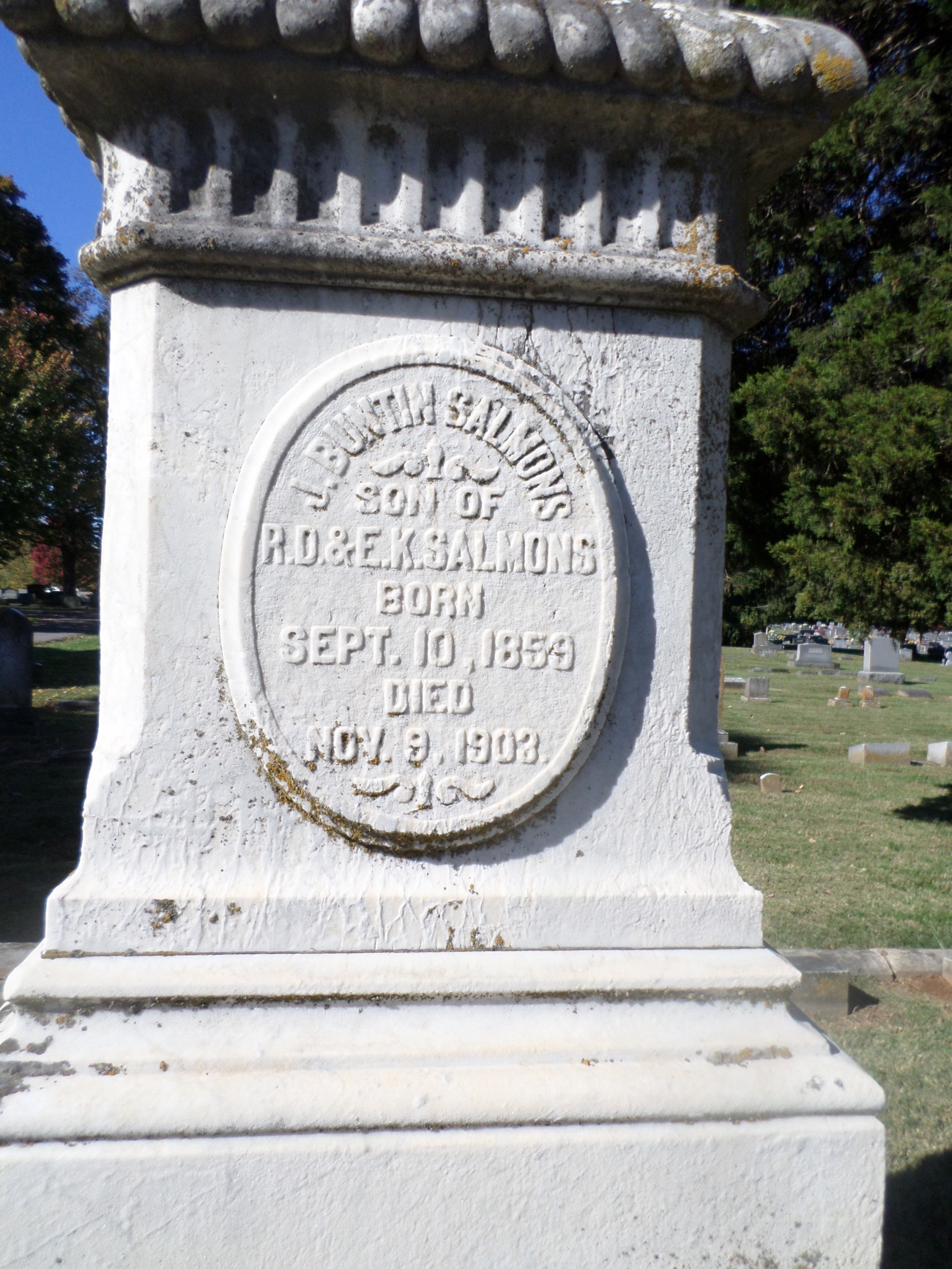 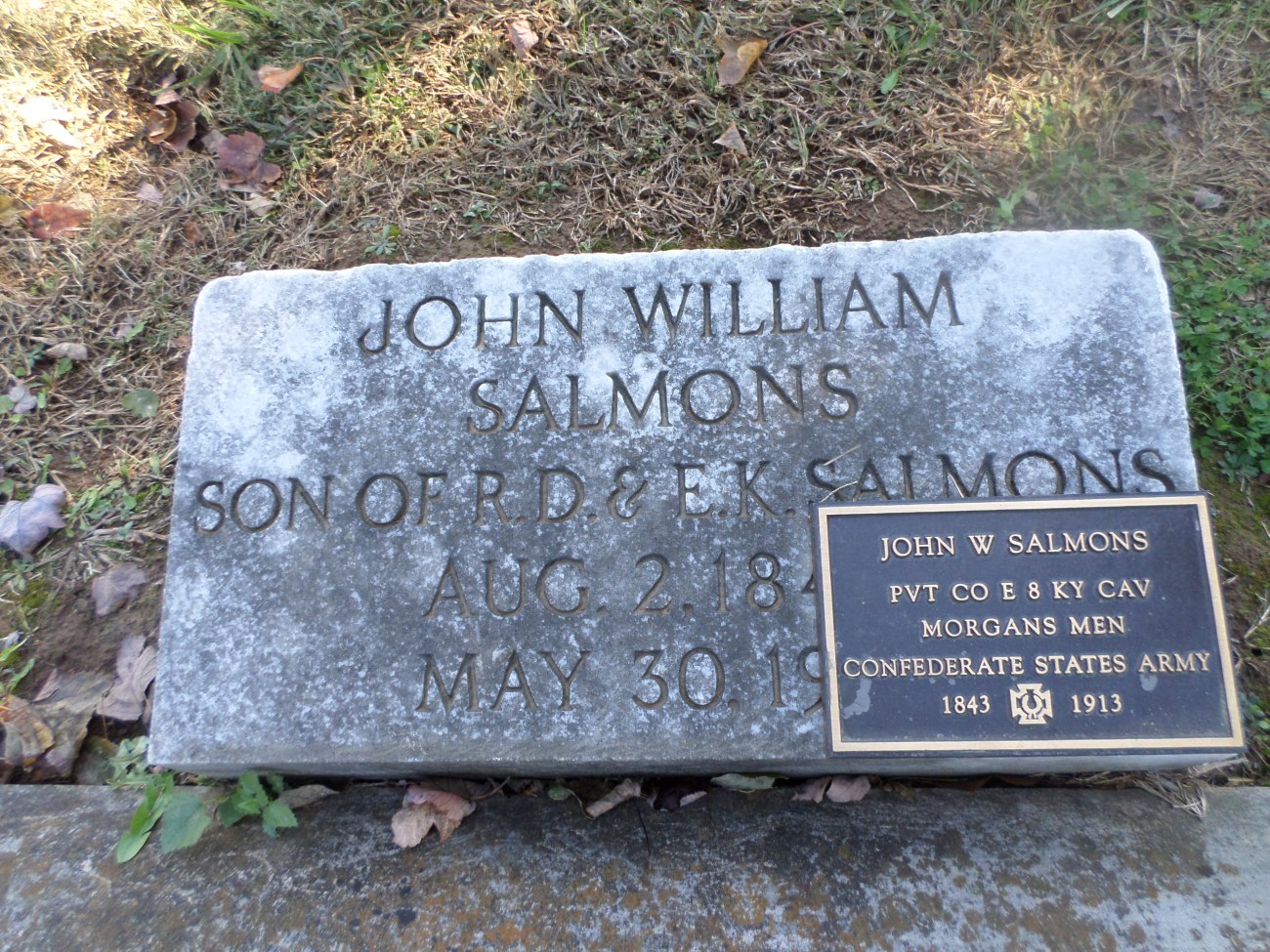 I feel that I can say, without exaggeration or fear of contradiction, that there is not a residence between Louisville and New Orleans, visible from the passenger trains of the Louisville and Nashville Railroad, that attracts as much attention or elicits as much admiration, as does the old Robert D. Salmons home, which for years has caught the eye of the traveling public, standing as it does, in full view of all passing trains.  As an advertisement of the town and county, its value in this particular is beyond estimation.  No doubt the ‘ambition bee’ for the ultimate ownership of this property was set to buzzing many years ago in the bonnet of its present owner, Col. R. H. Lacey, who, no doubt, has often been the willing auditor of the query, ‘Who owns the beautiful residence opposite the station we just left?’  We do not know this to be the case, but the colonel is such a great traveler and so filled with ambition, a laudable trait in anyone, we doubt not but that our symbology is correct, especially so since success has crowned his efforts.  Whether this is true or not, we take pleasure in saying that this attractive home could not have passed into more worthy hands than Col. Lacey’s and his estimable wife’s.  It is useless to deny, in this instance, that success is gained through unity of purpose.

The original owners, Mr. Robert D. Salmons and his accomplished wife were painstaking in their care of this residence and surrounding grounds, one of the show places of Southern Kentucky.  No man in this or any other state stood higher, or possessed to a greater degree the confidence and appreciation of his fellow men, than did Mr. Salmons.  He was a pioneer in the building of our town – his money making itself felt in every branch of industry.  He was the leading factor in securing our present railroad facilities, and for many years served as one of the directors.  His breadth of vision, bigness of heart and gentleness of disposition served him in governing the passions and sentiments of his fellow men, as though manipulating the keys or chords of some vast instrument.  His quickness of perception was only equaled by his caution, as shown in the results of his work.

The daughters of this estimable couple were noted for their beauty, refinement and brilliancy of intellect, these qualities, with numerous other graces, bringing to them admirers and suitors not only of this, but foreign countries as well.  The successful gentlemen were Mr. Kelley, of Nashville, Tennessee, who married Miss Mollie Salmons; Mr. Lea, of Nashville, Tennessee, who secured the hand of Miss Rebecca Salmons, and lastly, but not least, our boyhood chum, Albert McGoodwin, who won the heart and hand of the queen of these sisters, so considered, in the person of Miss Bessie Salmons.

It is with sadness of heart that we turn from this picture to the one presented by the Grim Reaper, for all, both husbands and wives have passed to their reward, with the exception of Mr. McGoodwin.  Not a member of the original Salmons family is living:  father, mother, three sisters and four brothers have gone to that rest from which there is no waking in this life.

In August of 1993 a storm ripped through the small town of Franklin, causing havoc in the cemetery.

Storms can rip through an area and destroy everything in their path in a matter of minutes.  They don’t look where they are going or try to steer around obstacles, they simply charge ahead and often leave a trail of destruction behind.

That is exactly what happened in August of 1993.  A storm raced through Green Lawn Cemetery tearing down trees and damaging several headstones.

Unfortunately severe damage was done to one of the oldest and most beautiful landmarks in the cemetery.  The angel which towers above the Catholic section of the cemetery fell from her pedestal, destroying her wings and breaking her arm.

The damaged angel was in the Salmons family lot.  According to Bill Randolph there are no living descendants of the Salmons family that could have taken care of the repairs.  Funds to repair the angel and two planters that were also damaged came from the Samuel K. Bland Cemetery Fund.

Mr. R. D. Salmons attended school in Simpson County and went to college in Bowling Green for two years.  He was the first chief agent in Franklin for the Louisville & Nashville Railroad.  He was one of the three sinking fund commissioners for the railroad and served as treasurer.

Salmons was president of the First National Bank of Franklin, the first bank ever established in Franklin.  He also advocated the building of Franklin Female College.

The Muldoon Monument Company in Louisville repaired the angel, flower urns and several other headstones damaged in the storm.  The angel is made of carara marble which originates in Carara, Italy.  The parent company of Muldoon Monuments made the angel many years ago, so they took a special interest in the project.