Brothers Fight on Opposite Sides During Civil War – Muhlenberg County 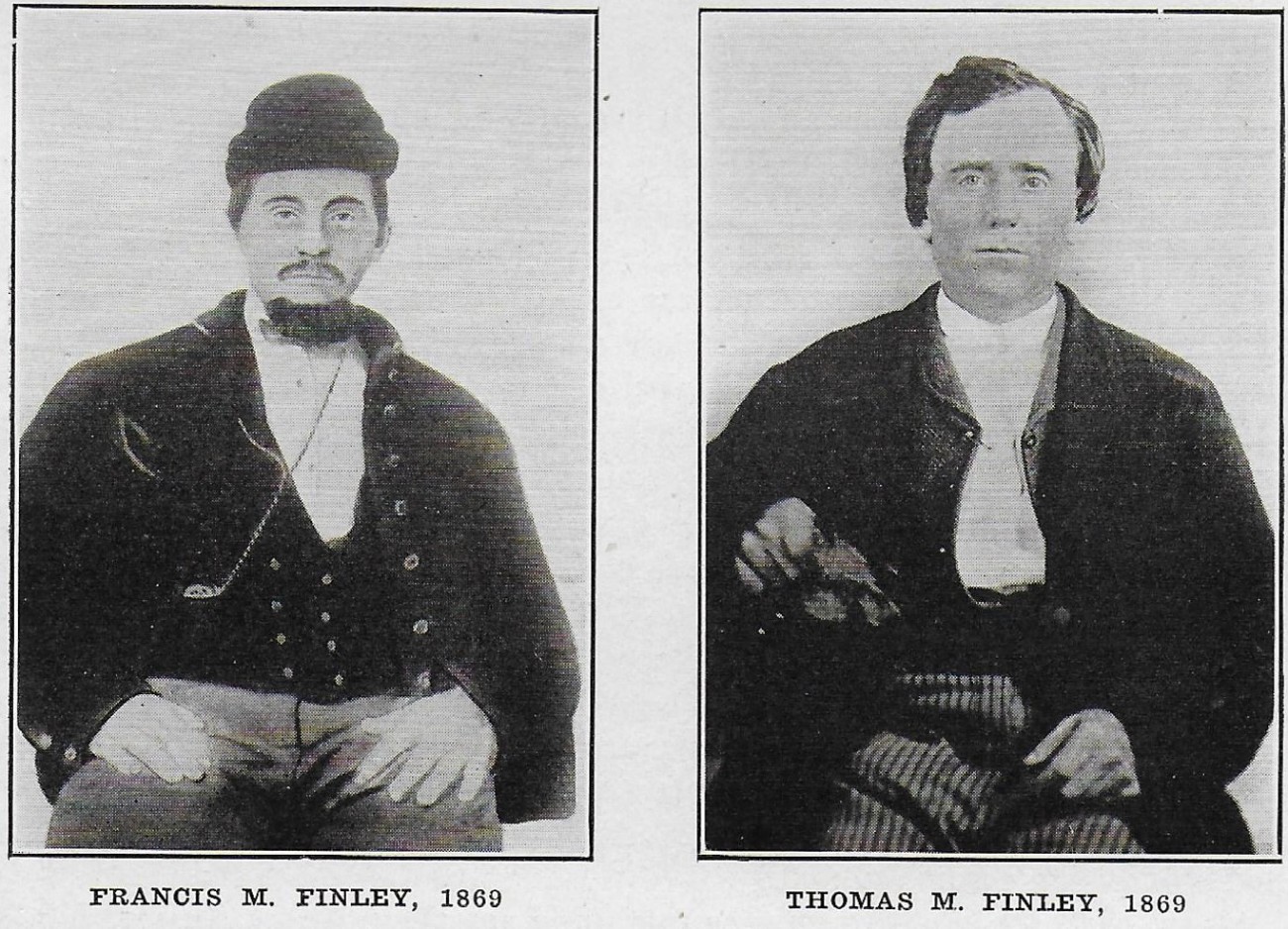 From A History of Muhlenberg County by Otto A. Rothert

Francis M. Finley, a Federal soldier, and Thomas M. Finley, a Confederate soldier, were brothers, members of one of the dozen or more families in Muhlenberg County that were represented in both armies.  They were born in the Long Creek country on what is known as the Finley Farm, and were among the best-known farmers in that section of the county.  They were sons of William H. Finley, who settled in the southern part of the county about 1830, where he died in 1852.  His wife was Cynthia Wagner, daughter of a well-known local miller.

Francis Marion Finely was born April 15, 1833, enlisted in Company I, Forty-eighth Kentucky Infantry (Federal), in March, 1863, and remained with that company until it was mustered out of service in December, 1864.  He married Susan S., daughter of John W. Shelton, who lived near Old Liberty and was one of the oldest families in the county.  Francis M. Finely died March 14, 1908, on his farm near Greenbriar Church, eleven miles south of Greenville.  Alexander Y. Finley, of the Pond Creek country, is his only son.

Thomas Monroe Finley was born June 17, 1835.  He enlisted in 1862 in Company D, Second Kentucky Cavalry (Confederate), at Allensville, Todd County, and served with that regiment until the close of the war, when he returned to his Long Creek farm, after removing to Greenville, where he now lives.  His wife was Nancy A., daughter of J. Jackson Robertson, who lived near the Buckner Stack.  She died January 14, 1914.  Mrs. Mollie C. (Charles M.) Shutt is their only child.

With this introduction I started the search for more information about these two brothers.

Francis Marion Finley was 29 years old when he mustered in as a private with Captain Mitchell’s Co., 48th Regiment Kentucky Infantry at Princeton, Kentucky, on October 26, 1863.  His enlistment was for one year.  He joined the northern army on August 31, 1863, at Greenville, Kentucky, Muhlenberg County.

Francis’ term with the army was rather uneventful.  He mustered out December 15, 1864, in Bowling Green, Warren County, Kentucky. 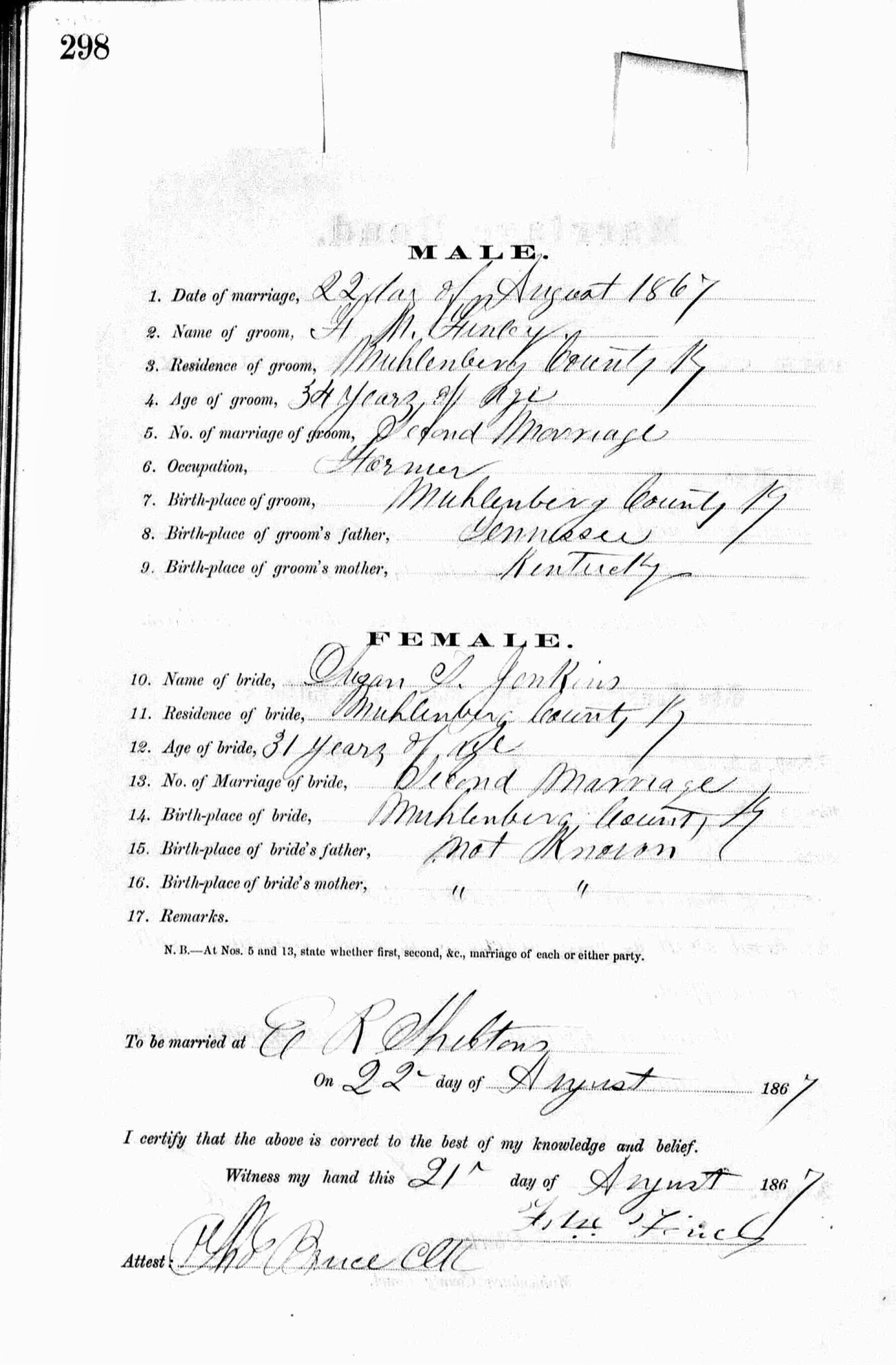 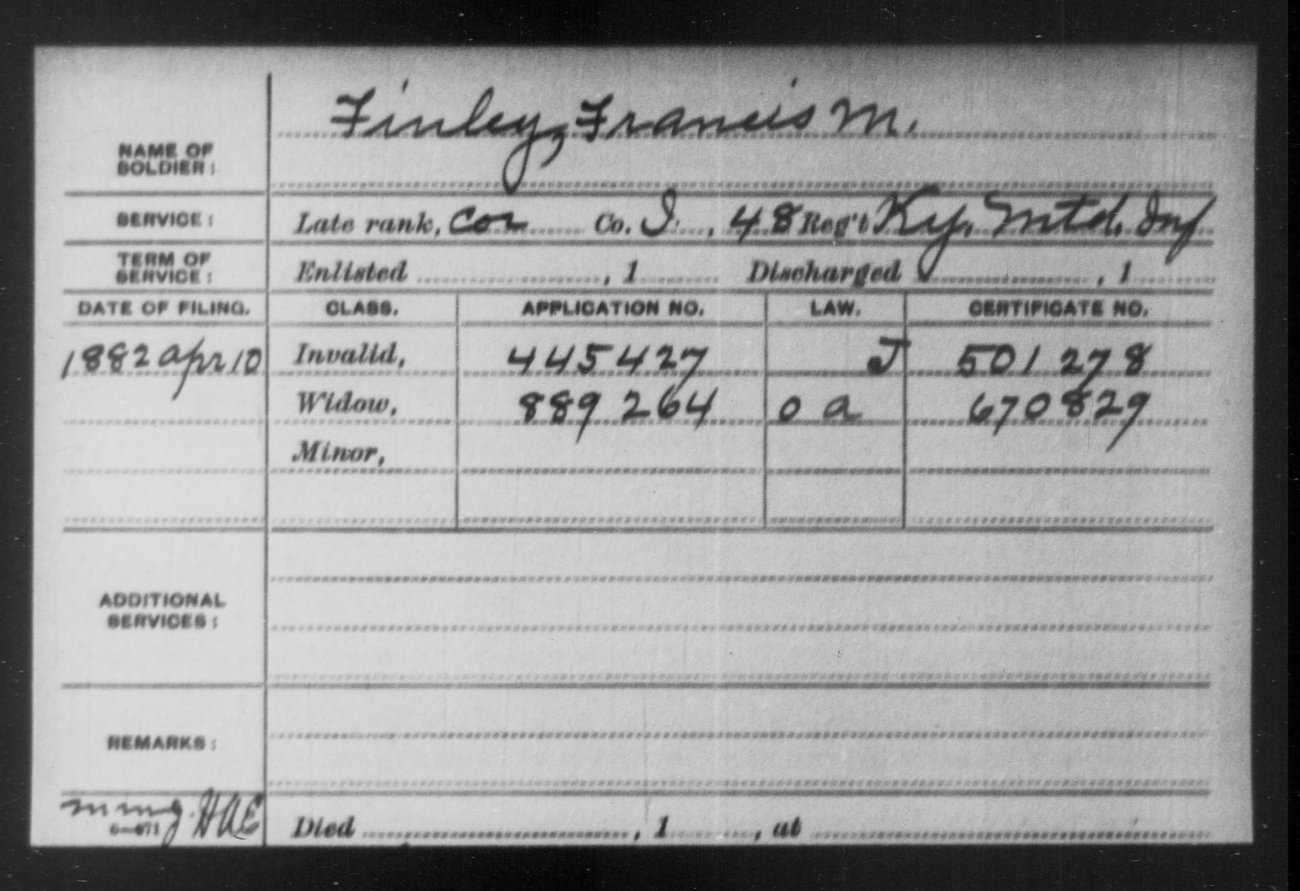 Thomas mustered in with the Confederate army August 31, 1862, having enlisted January 14 of that year. 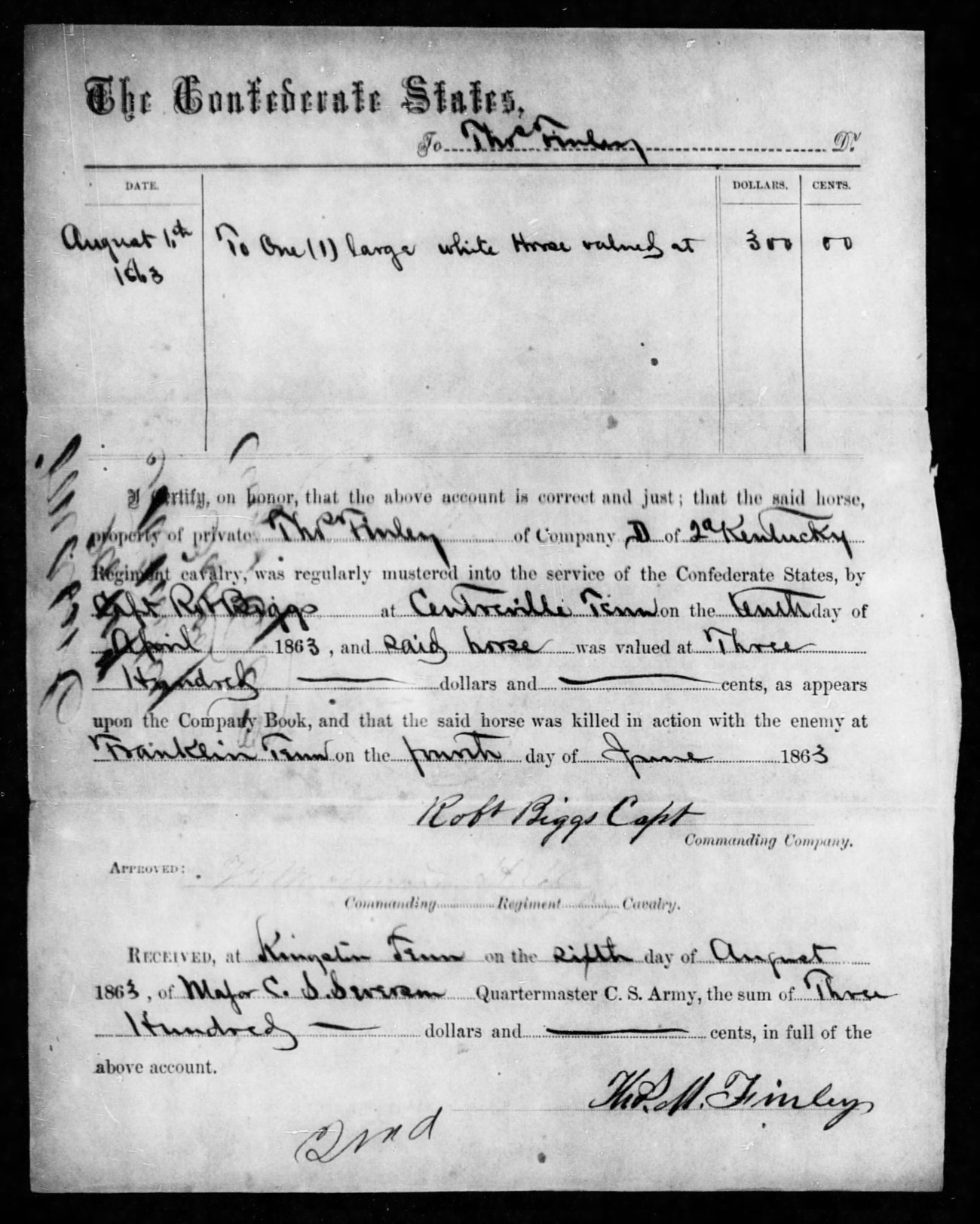 Thomas Finley’s horse was killed during action at Franklin, Tennessee, on the fourth day of June, 1863.  The horse was worth $300 and the above certificate was given to Thomas on August 6, 1863.  Did he receive the money?

Five months after his horse was killed, Thomas was taken prisoner six miles from Cleveland, Tennessee, on November 24, 1863.

He was first a prisoner of war at a military prison in Louisville, Kentucky, and on December 11, 1863, was transferred to Rock Island, Illinois.  This was one of the largest and most notorious of the Union prison camps, and had just opened the month before Thomas Finley arrived.  As per its name, Rock Island was indeed an island, in the Mississippi River, between Davenport, Iowa, and Moline, Illinois.  Sanitation was just one of the problems of this prison.  5,000 Confederate prisoners were delivered there in December 1863 even though it was not ready to receive them, and the temperature was below zero.  A smallpox epidemic killed more than 600 within three months.  However, Thomas Finley survived.

Thomas M. Finley subscribed and swore the oath of allegiance of the United States on May 22, 1865.  He was described as having a light complexion, brown hair, blue eyes and was 5 feet 6 inches tall. 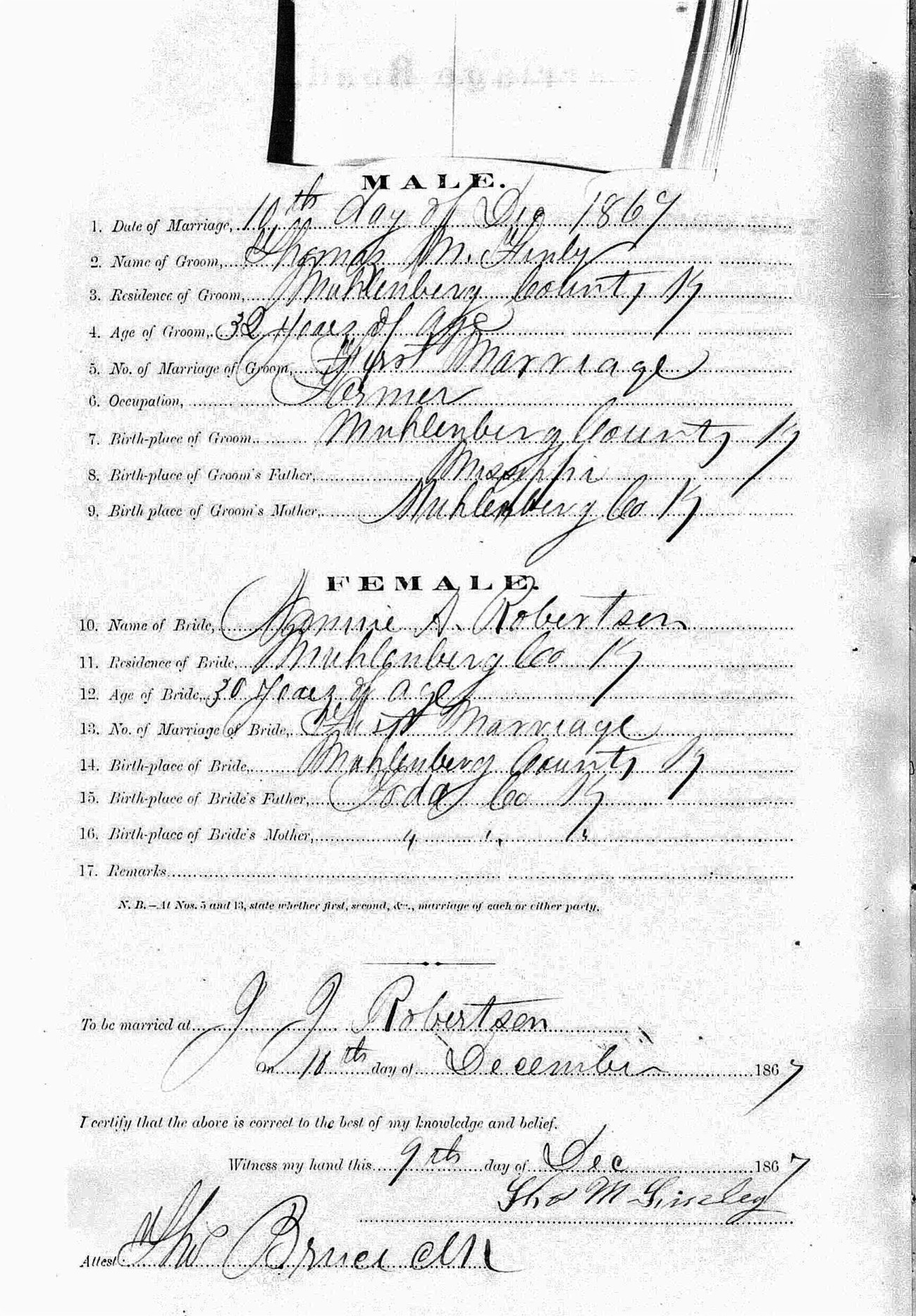 Arriving home after the war, Thomas Finley met and married Nannie A. Robertson, December 10, 1867.  It was a first marriage for both.  Thomas was 32, Nannie, 30.

Fighting on opposite sides during the war did not hamper the relationship between the brothers.  In 1900 the two couples lived next door to each other.  Both had been married 33 years.  Thomas and Nannie had 3 children, 1 living, daughter Mollie.  Francis and Susan had five children, five living.  Francis died in 1908 and Thomas lived until 1926, dying at the age of 91.

Were all families who fought on opposing sides during the Civil War able to put aside their differences, after the war, and continue as a family unit?  What about your families?