By Kentucky Kindred Genealogical Research on November 24, 2019 • ( Leave a comment )

Today we visit the small town of Calhoun in McLean County.  Situated in western Kentucky, due south of Daviess County, Calhoun is located in the central part of McLean on KY 81.  The mighty Green River splits the county in half, separating Calhoun from Rumsey (an even smaller town just south of Calhoun), where Ritchey’s sister, Kathy, lives.

While visiting last year, Ritchey visited the Calhoun Cemetery and took many photographs.  I share one of those with you today, that of the gravestone of George W. and Julia D. Cecil.

George W. Cecil was the son of John Pius Cecil and Dorothy Ann French.  He was born in 1842 in Edmonson County, where he spent the first 20+ years of his life.  From the 1850 and 1860 census records a large family is listed – Eliza J., George W., Mary E., Thomas J., Martha M., Julia A., Sarah E., Victoria, Colene Angeline, Henry Richard, William Alexander and John R.

Julia Dean Baker was the daughter of Hugh Baker and Enmity Denton, this information taken from her death certificate.

In the 1880 census George and Julia are listed in Grayson County, just north of Edmonson where he was born.  By 1900 the family were living in McLean County, in Rumsey.  The couple had a total of nine children:  Joel T., Laura Alice, Fanny M., Emmett Robert, Lizzie, Mary A., Charles Edgar, William Denver. and Hugh Guy Cecil.  George farmed the land all his life.

In 1910 four children were living with their parents – Charles, William, Guy and Lizzie. Ten years later only Guy was in the household with them.

A tragedy befell the family in 1911.  Son Joel T. Cecil was a switchman for the Illinois Central Railroad in Louisville, Kentucky.  While working in the railroad yards on March 26th, a crew of men were engaged in switching some coal gondolas in the yards when a gondola rolled back and bumped into the cut of cars, causing an accident that crushed Joel between the car and the gondola.  He left a wife and three small children.

In 1925, George and Julia moved to Calhoun to live with their daughter Fannie.  He died a week later. 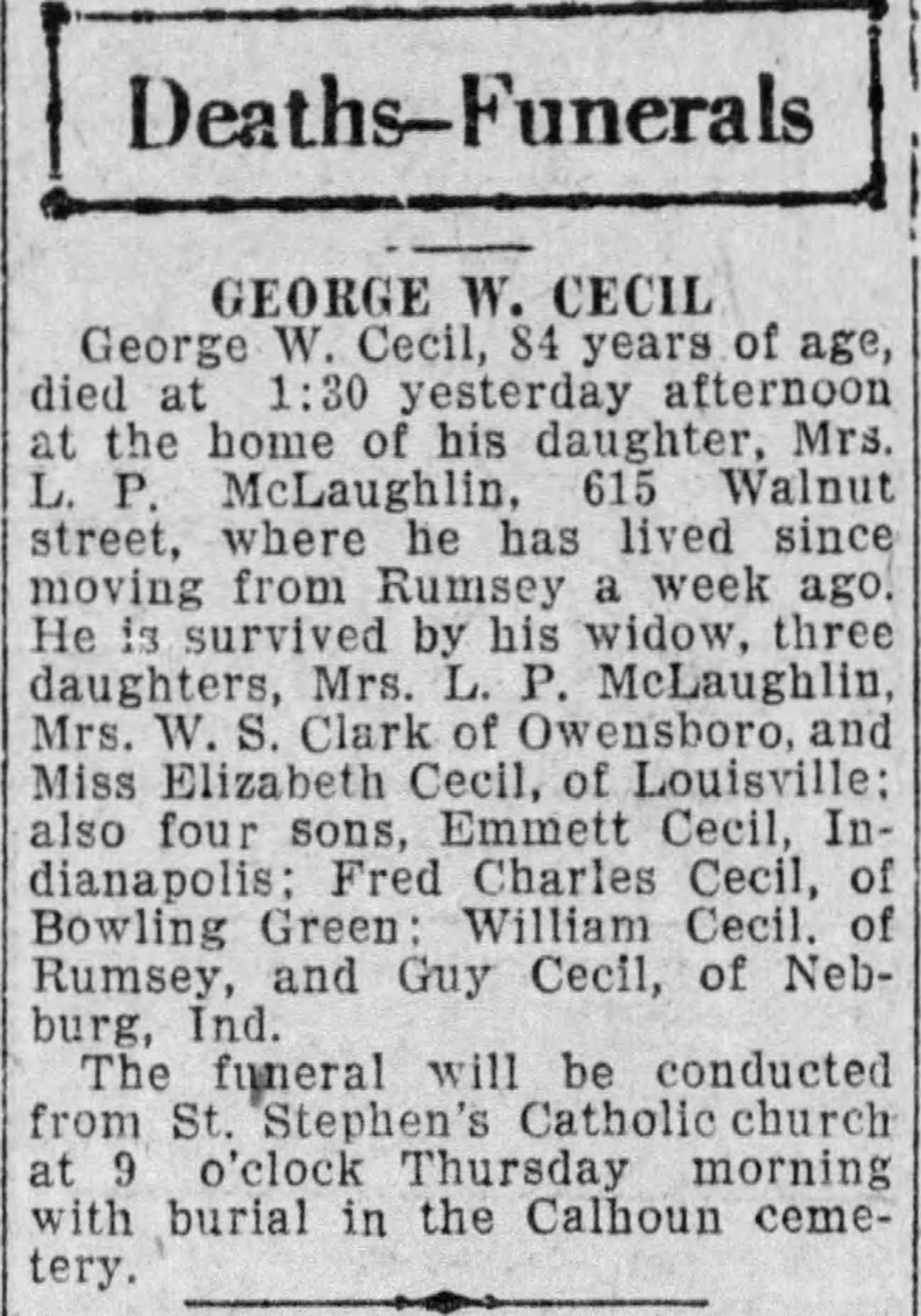 George W. Cecil, 84 years of age, died at 1:30 yesterday afternoon at the home of his daughter, Mrs. L. P. McLaughlin, 615 Walnut Street, where he has lived since moving from Rumsey a week ago.  He is survived by his widow, three daughters, Mrs. L. P. McLaughlin, Mrs. W. S. [Laura] Clark, of Owensboro, and Miss Elizabeth Cecil, of Louisville; also, four sons, Emmett Cecil, Indianapolis; Fred Charles Cecil, of Bowling Green; William Cecil, of Rumsey, and Guy Cecil of Newburg, Indiana.

The funeral will be conducted from St. Stephen’s Catholic church at 9 o’clock Thursday morning with burial in the Calhoun Cemetery.

Julia Baker Cecil lived another four years before passing away in 1929.

Mrs. Julia Cecil, 84, died at 1:30 o’clock this afternoon following an illness of influenza which later developed into pneumonia, at the home of her daughter, Mrs. Laura Clark.

Mrs. Cecil was on a visit to her son, Charles Cecil, at Rumsey, McClean County, during the Christmas holidays, when she developed influenza.  She was brought here to the home of her daughter, at Seventh and Cedar Streets, and a few days later pneumonia set in.

Warner Cecil, patrolman of the Owensboro police department, is a nephew of the deceased.

No funeral arrangements have been made.