By Kentucky Kindred Genealogical Research on June 16, 2020 • ( Leave a comment ) 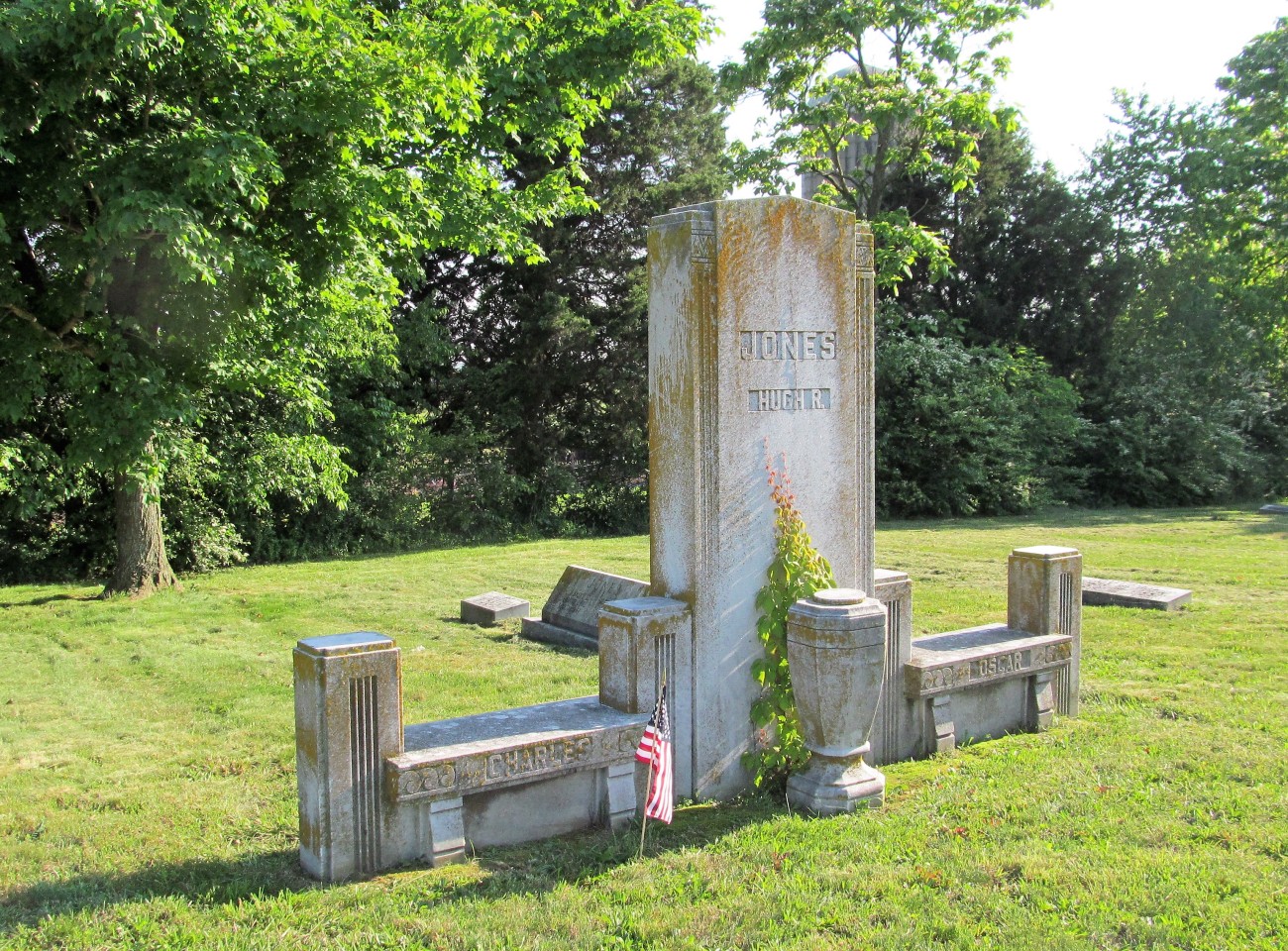 While making his living as a machinist, wool carder and farmer in Bethel (later South), Ky., he and Minerva had four sons and four daughters.

One of the four sons was Hugh Riley (1864-1941).  He left school when he was 13 and started as an independent freight-hauler working between Shrewsbury and Caneyville and making $52 a year.  He paid half this amount as rent on the horses.

When he was 17, he partnered with Robert Duvall of South, and they bought Robert’s brother’s store.  Under the firm name of Jones and Duvall began a mercantile career that would last for the next 36 years.

“In early manhood he foresaw the increase of land values in Grayson County and wisely invested his savings in real estate, making good profits when he sold.  At various times he owned practically the entire farming section between Shrewsbury and South,” reads a 1920 annual report from Leitchfield Deposit Bank.

In April 1884, he married Emma J. Duvall, Robert’s older sister.  They lived in Shrewsbury where, while owner and operator of the mercantile store, he served for 14 years as postmaster.

In 1912, the annual report continues, “Hugh Riley moved with the family to Leitchfield.  Here he bought out the mercantile business of J. M. Smith & Co. and successfully conducted one of Grayson’s largest general stores under the name of Jones and Duvall.”

He was elected vice president of Leitchfield Deposit Bank in 1919 and president in 1920.  He was president until his death in 1941, but his children and grandchildren were to carry on in his tradition of mercantile and banking. 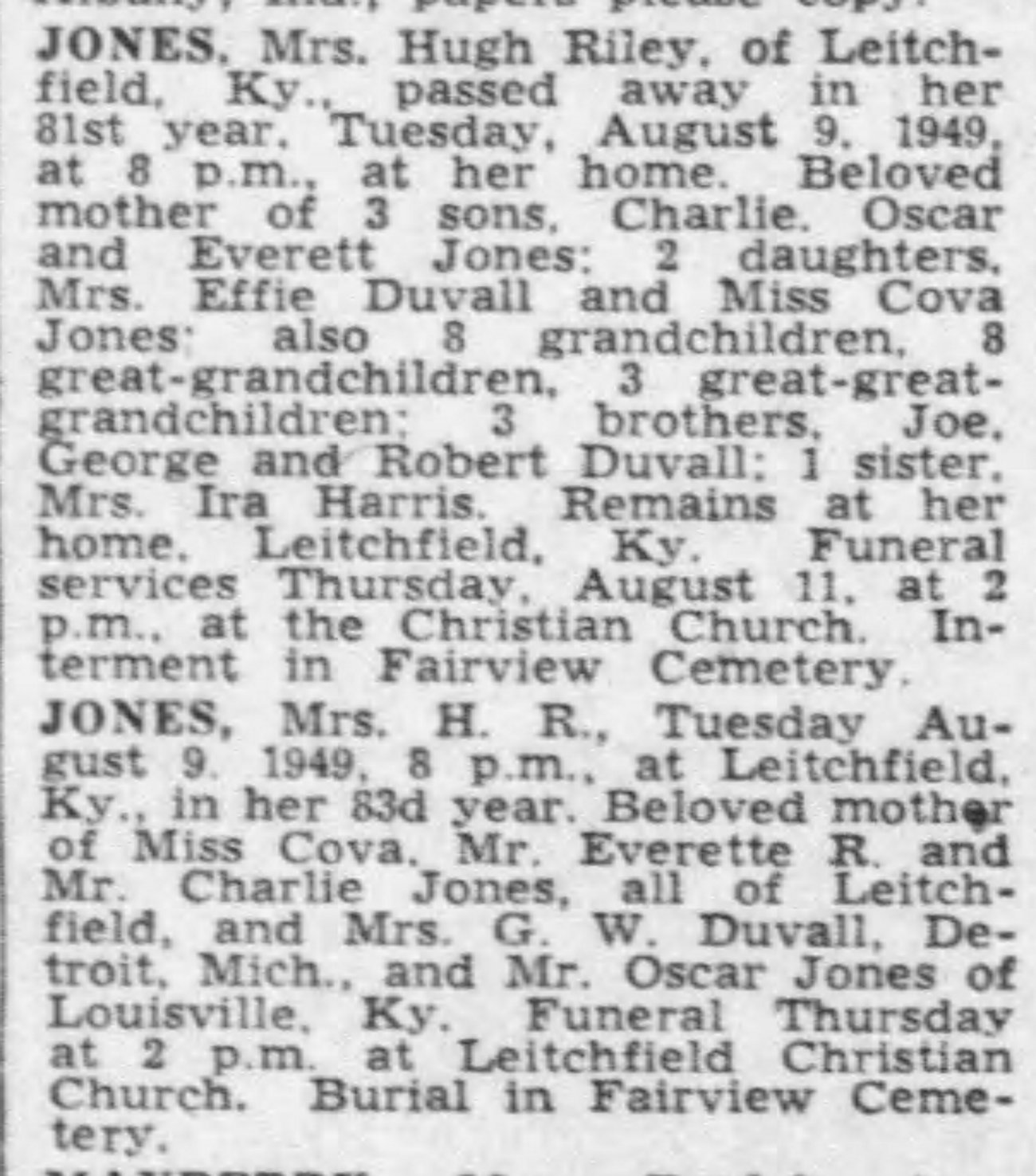 Charles, Oscar, and Everett bought the Depot Store in 1915, a 2-story building fronting on the railroad.  They operated a successful general merchandise business until 1932, when they moved to the west side of Public Square.  There they opened Jones Bros. Store.

They operated the store together until 1944, when it was sold to J. Roy Arnett.  Charles married Nova Clemons and remained in Leitchfield after the store was sold.  For some years, he served on the Leitchfield Deposit Bank Board and operated various businesses in the city.  He died in 1966.

His son, Cuthbert, also stayed in Leitchfield and worked at Jones Bros. until 1943.  He also operated a grocery store and the Jones Motel.

Oscar married Margaret Sirles and had two children, Howard Russell Jones and Emma Sirles Jones.  He had no children by his second marriage to Ava Kelly.  He moved to Louisville in 1945, and worked at Bond Clothing until he retired. 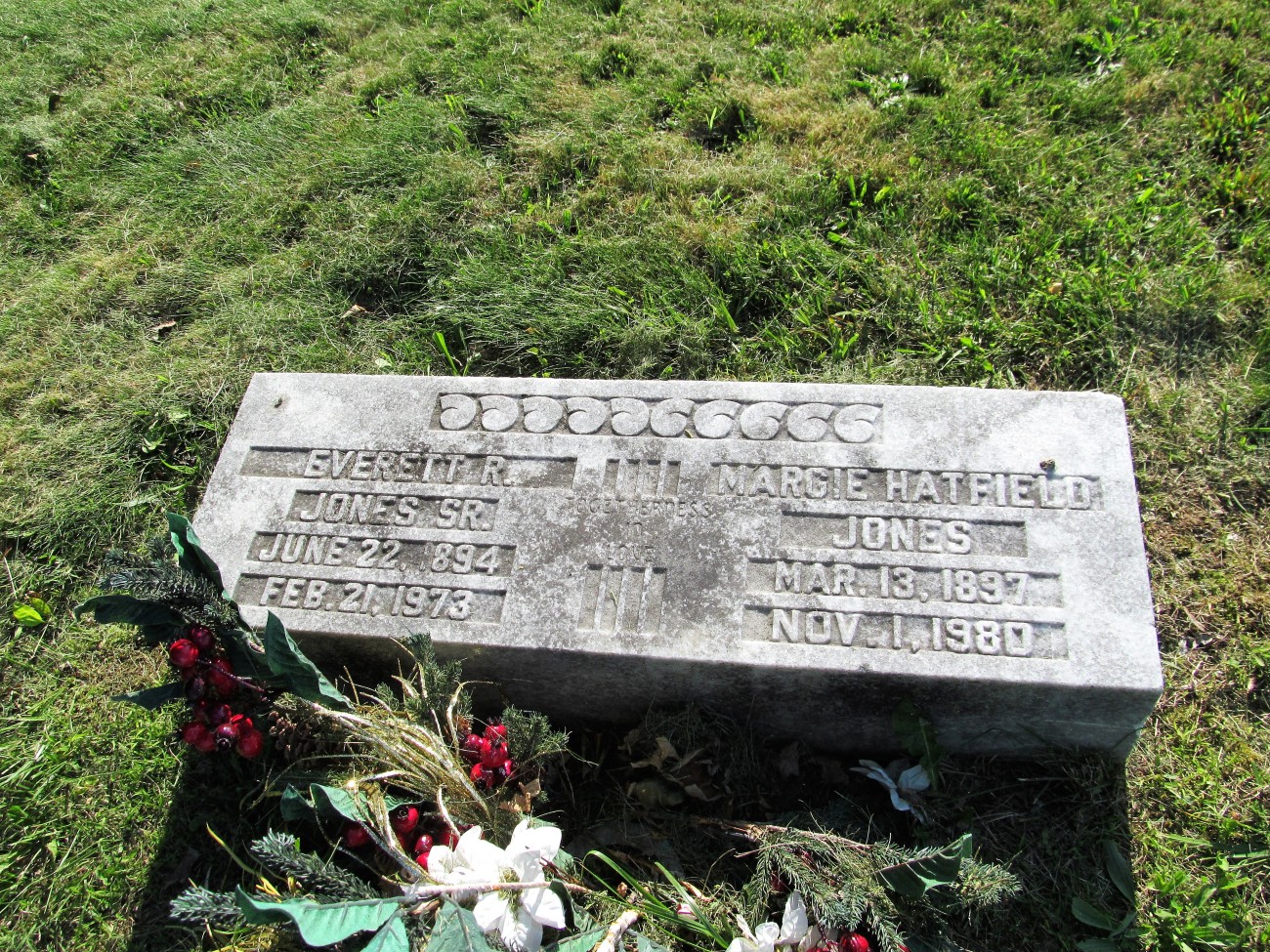 Everett continued with the Jones Bros. store after it was sold to Arnett, remaining there until he retired.  He also served for several years on the Leitchfield Deposit Bank Board.  He married Margie Hatfield of Eastview, and they had one son, Everett Riley Jones, Jr. 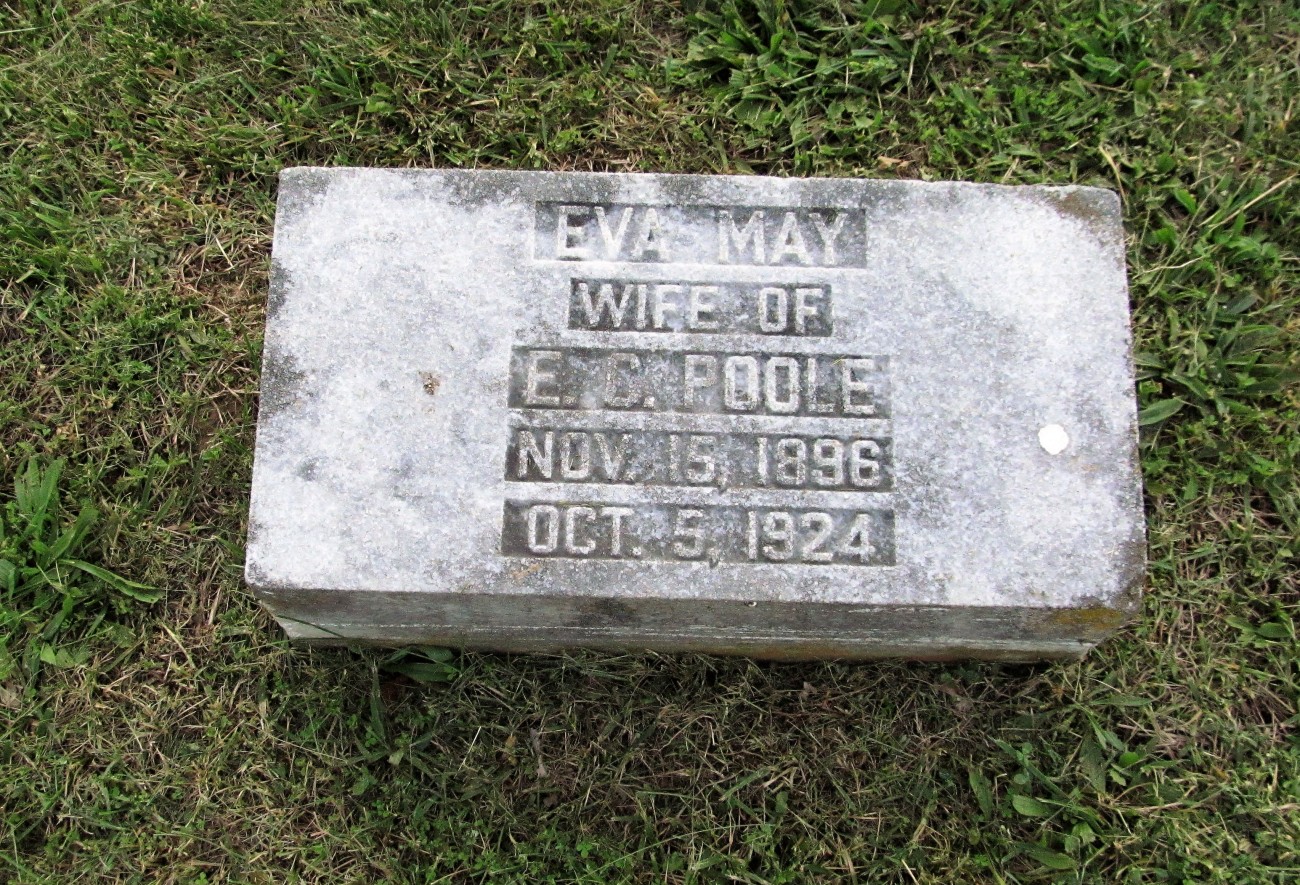 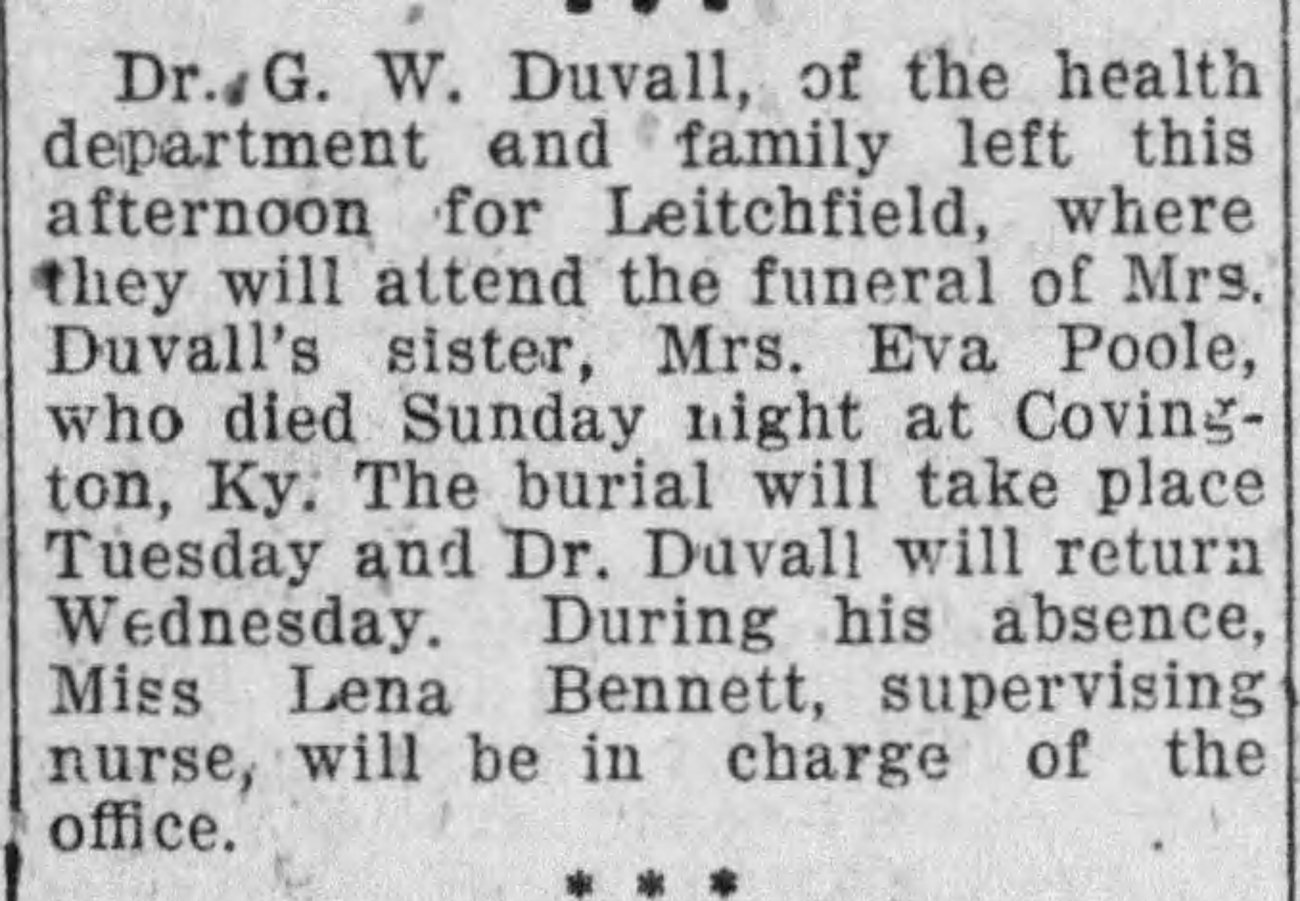 Eva married Elmer Poole.  She died when their daughter, Patsy, was a small child.  After her father deserted her, Hugh Riley and Emma raised Patsy.  As a child, Patsy folded bank statements for her grandfather, then went to work for the bank as a paid employee in 1941 at age 16.

After working as a cash filer, bookkeeper, teller, assistant cashier, cashier, and vice president, she became bank president.  As the bank celebrated its 100th birthday in 1997, she had been with the bank longer than anyone living and the only woman on the bank’s Board of Directors.

Cova remained in Leitchfield and with Patsy’s husband, Russell Jones (non-relative), established Jones Ready-to-Wear in 1952.  The store was located in the old Grayson County State Bank on the northeast corner of The Square.  When they retired, the building was sold to David Vickery. 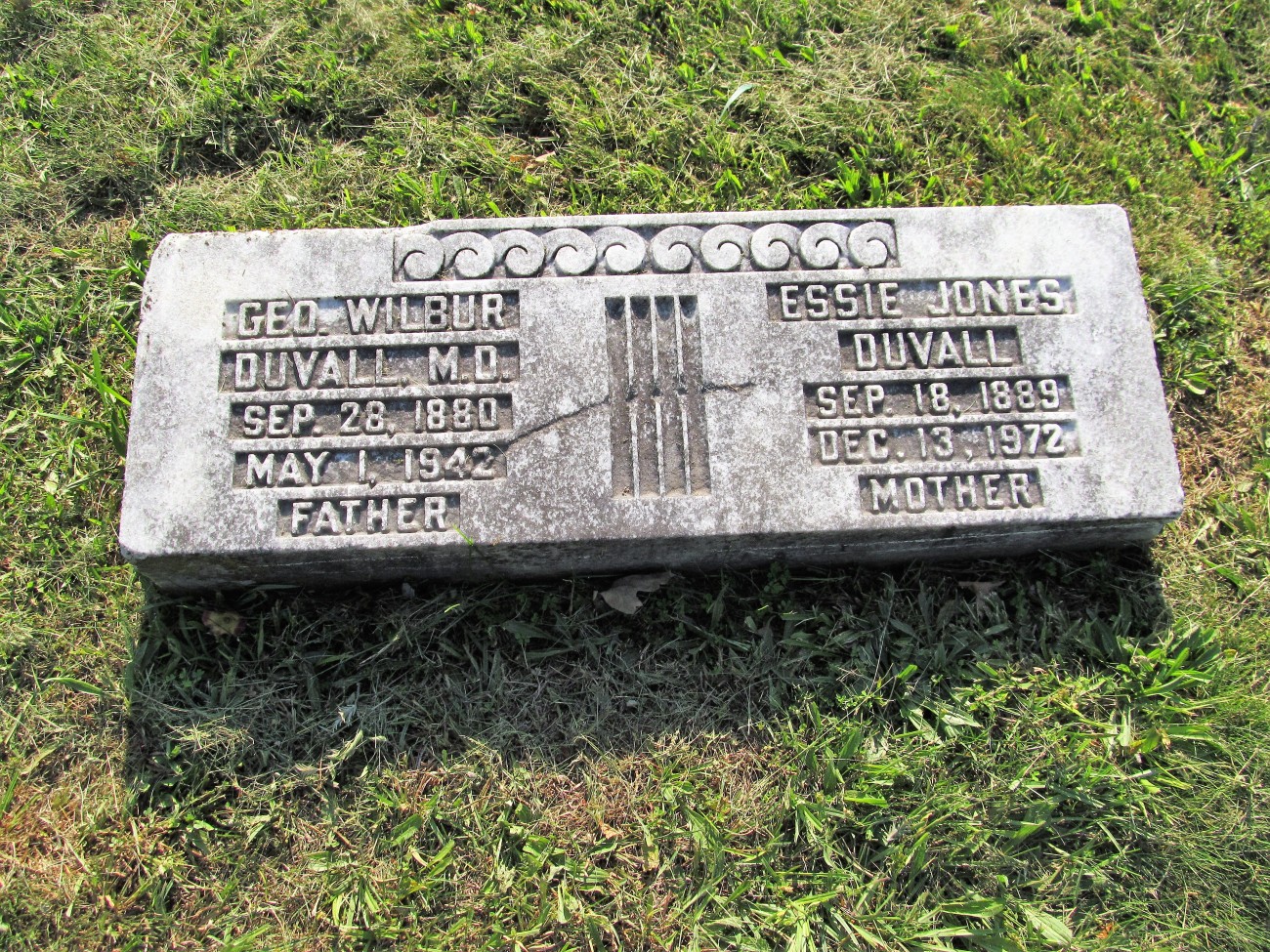 Essie married Dr. George Wilbur Duvall, who practiced in Shrewsbury, Clarkson, and in Chicago as superintendent of Rush Medical College and Hospital.  Her sons, Walter and Hugh, lived in California and her daughter, Geneva, lived in Michigan. 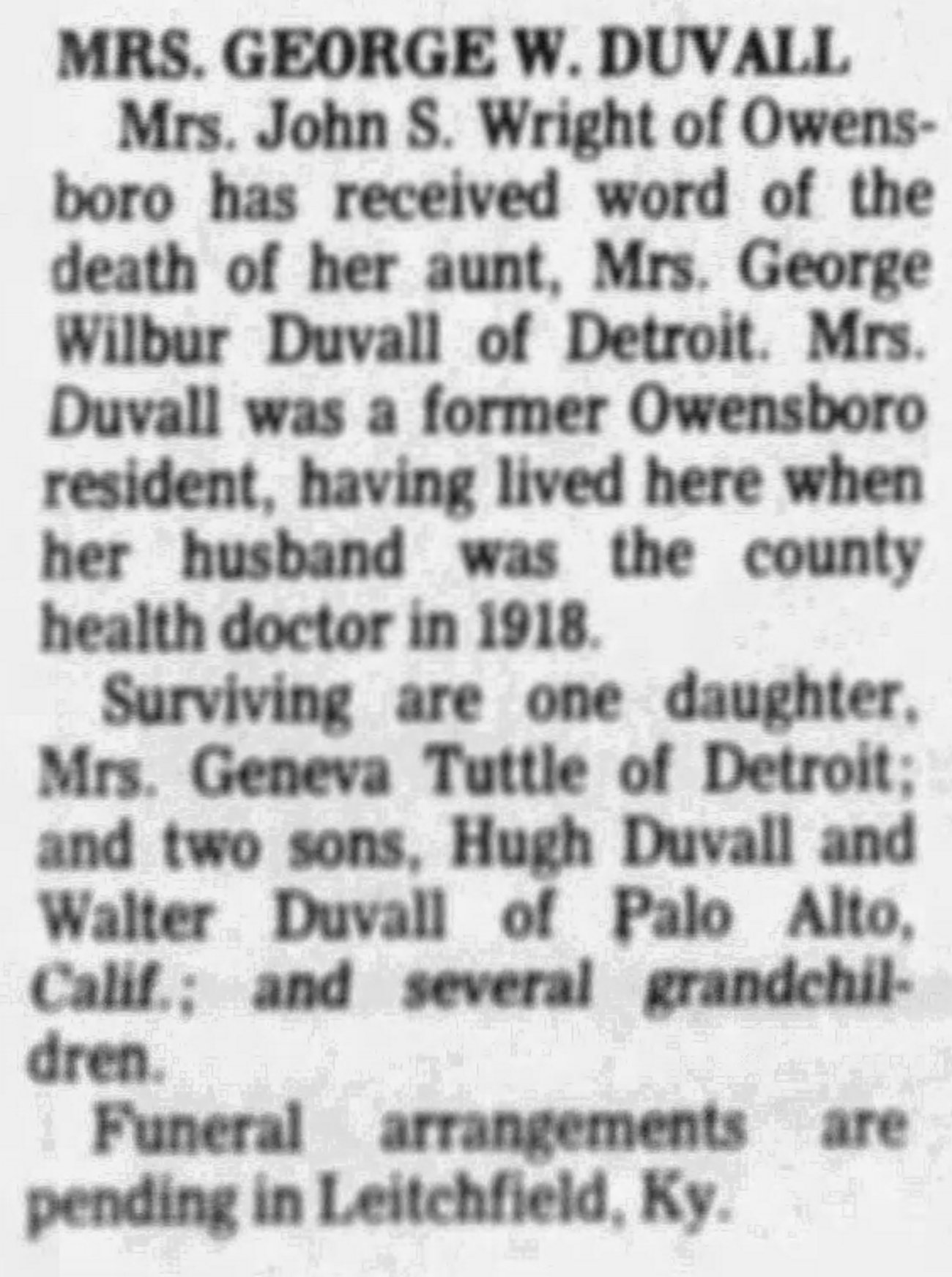 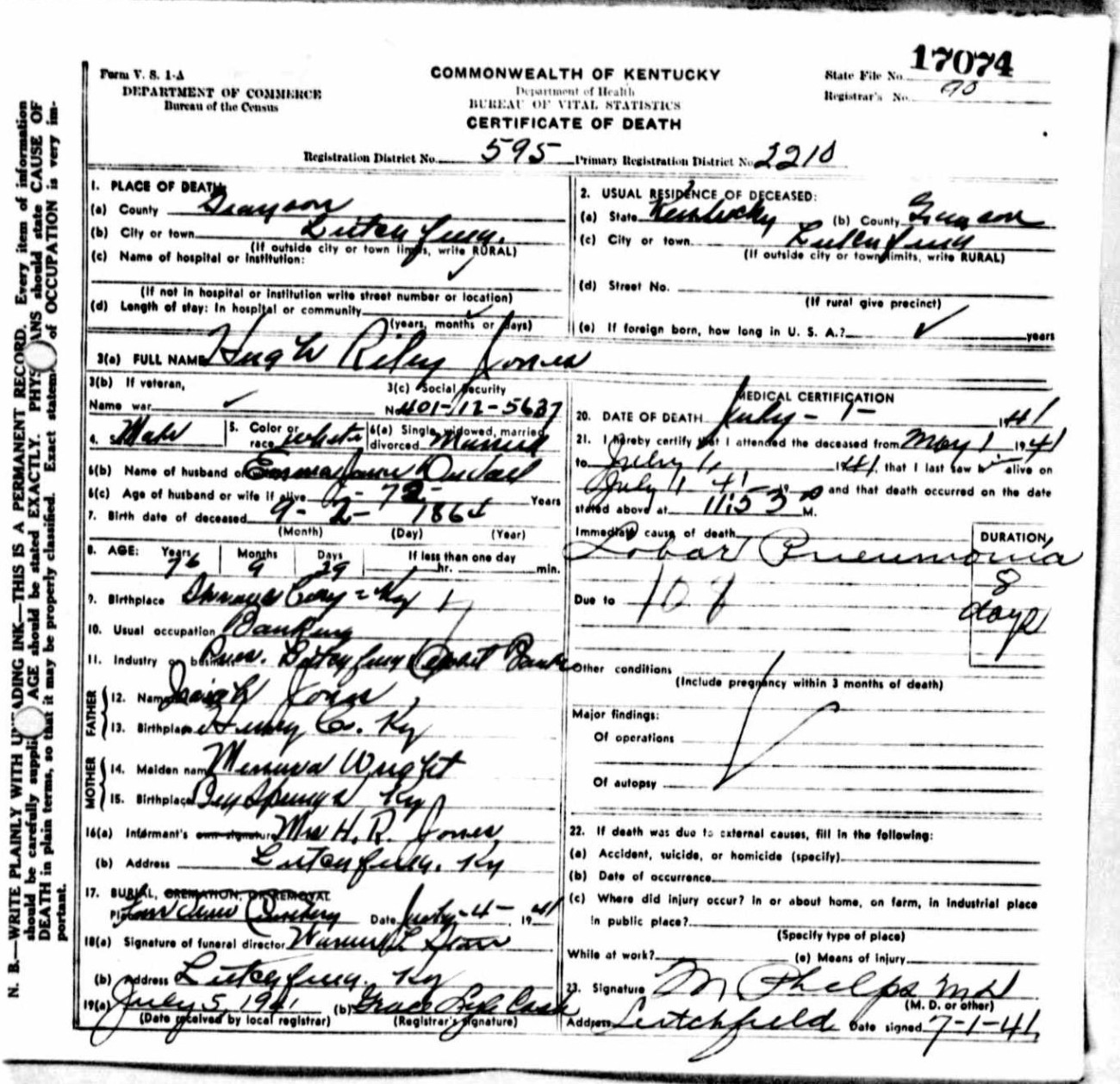 Hugh Riley Jones is found in the 1870 and 1880 census for Grayson County with his parents, Isaiah and Minerva Wright Jones.  Hugh’s death certificate lists them as parents.  In 1900 Hugh, Emma and their children are listed.  By 1910 Essie is married to George W. Duvall and has one daughter, Geneva.  Charles has married Nova and they have two children, Cuthbert and Lalvada.  Hugh and Emma live with three of their children – Oscar, Eva and Cova – #229.  Charles and Nova are #230 and George W. Duvall and Essie are #231 – all homes one after the other.  Son Everett rooms with Robert Duvall in Driskill, where he is listed as a salesman. 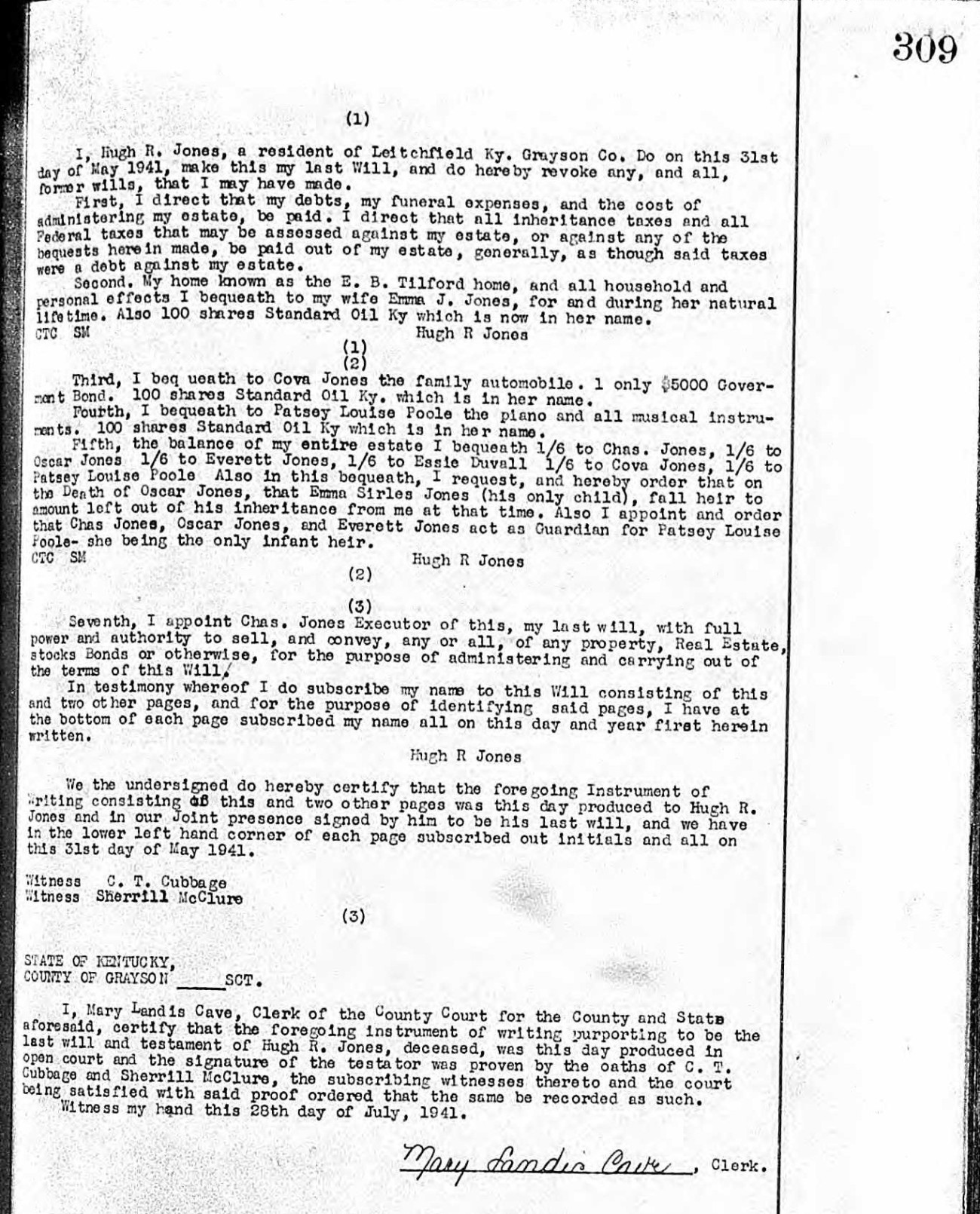 Grayson County Will Book B, Page 309

In Hugh Riley Jones’ will he divided he gives “my home known as the E. B. Tilford home, and all household and personal effects” to wife Emma.  Emma Jones, Cova Jones and Patsy Louise Poole are given 100 shares of Standard Oil Kentucky.  Cova is given the family automobile.  Patsy Louise Poole was given “the piano and all musical instruments.”  The balance of the estate is divided into six parts and given to Charles Jones, Oscar Jones, Everett Jones, Essie Duvall, Cova Jones and Patsy Louise Poole.  “Also in this bequeath, I request, and hereby order that on the death of Oscar Jones, that Emma Sirles Jones (his only child), fall heir to amount left out of his inheritance from me at that time.  Also I appoint and order that Charles Jones, Oscar Jones, and Everett Jones act as guardian for Patsy Louise Poole, she being the only infant heir.” 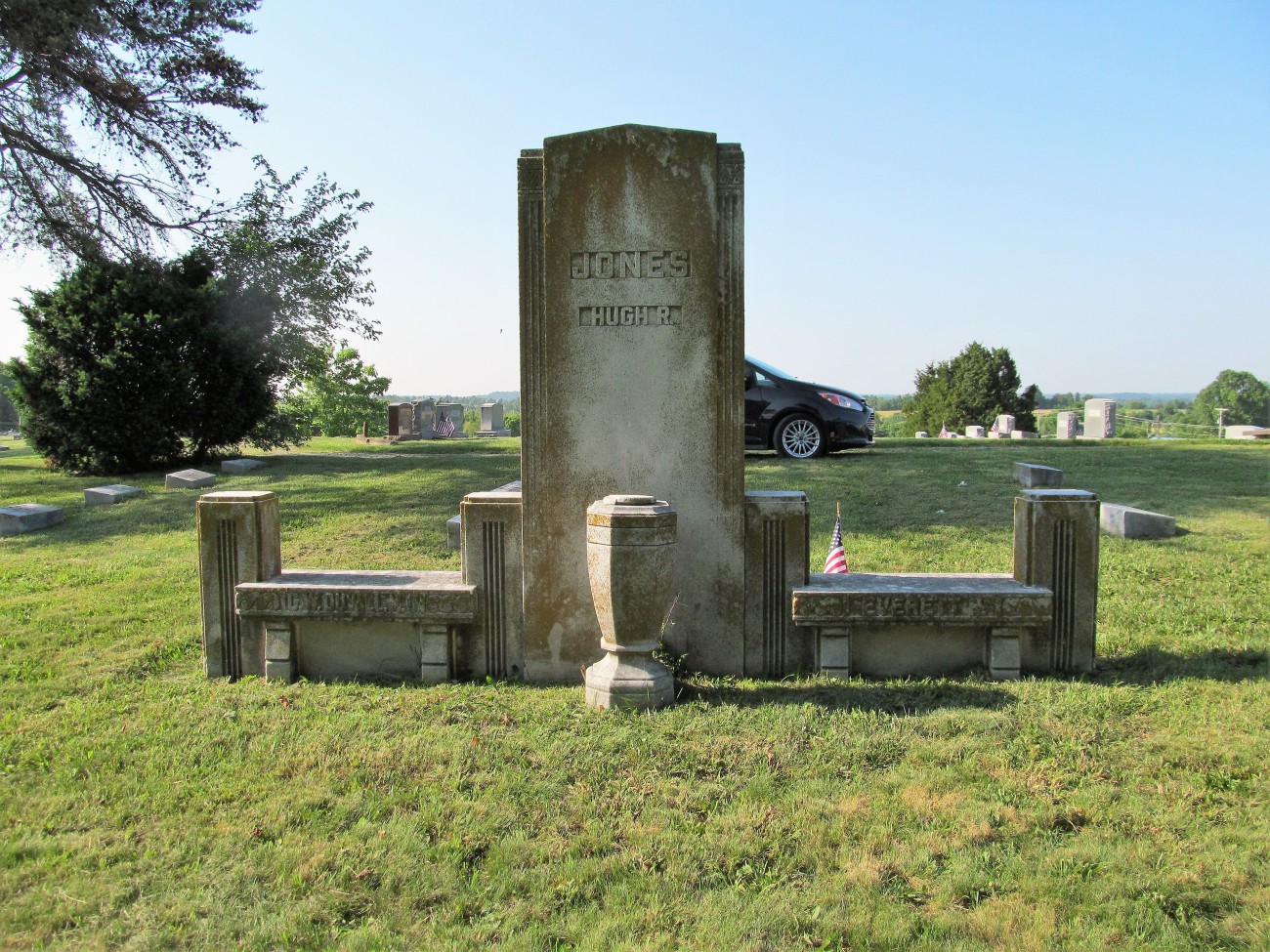 Son Everett and son-in-law George Wilbur Duvall on back of family memorial.