By Kentucky Kindred Genealogical Research on August 15, 2020 • ( Leave a comment )

My fourth-great-grandfather, John C. Dillehay, was born in Maryland and came to Kentucky around the turn of the 19th century.  His father has eluded me – perhaps this will of George Delahay from Charles County, Maryland, could hold a clue?  Let’s check other records first.  This last name has multiple spellings – Dillehay, Delahay, Delahaye, etc.

There is a reference to George Delahay marrying Susanna, he died in 1698 – evidently the gentleman of the following will.  Also in the book is the following – John Delahay, born c1623, married Jane, born c1629, probably Jane Sesson, before 1659, at which time he applied for land rights for transporting himself, wife Jane and son (stepson) James Sesson into Maryland.  Could this be the father of George Delahay?

Page 57 – John Delahay, Planter.  La Hay, purchased September 8, 1659, 150 acres.  Located in Charles County on the east side of the Potomac River on the east side of Ponton Creek, beginning at a bound Oak of William Stone’s tract of land called Stone’s Rest.  The former owner was George Thompson.  His second tract of land was called Delahay’s Chance, purchased June 19, 1663, 300 acres, on the north side of the Potomac River next at adjoining Andrew Watson’s tract of land called Saturday’s Work.  Also adjoins John Ward’s tract called Ward’s Addition.  Mentions that Delahay transported himself, wife Jane and his son James Sesson.

Page 79 – Delahay’s land adjoins Silvanus Gilpen’s land, Woodberry’s Hope – on the north side of the Potomac River between John Delahay’s tract of land called Delahay’s Rest, now in the possession of James Lee, and a tract called Delahay’s Chance, beginning at a bound tree known as the Halfway Tree.

Page 92 – A tract of land called Holly Spring, purchased July 30, 1705, was originally surveyed for John Delahay and James Lee (both deceased at this time) on August 1, 1664.

Pages 130-131 – Richard Harrison, in his will probated July 25, 1710, gives part of Delahay’s Chance to son Joseph.  Wife Jane is mentioned – most likely Jane Delahay, sister to the below George Delahaye, who left land to Jane’s children if his wife did not produce an heir.  In son Joseph Harrison’s will written December 24, 1726, he leaves his 150 acres of Delahay’s Chance to wife Verlinda Harrison.  Mentions his mother Jane Evans.

Page 64 – March 8, 1680, indenture from Thomas Wharton, planter, to Thomas Hussey, between land laid out for John Delahay and 30 acres laid out for James Lee formerly known by the name of the Halfe Way Tree.

Page 76 – August 30, 1683, indenture from Edward Mings, planter, to William Pinner, witnessed by George Delahay, acknowledged by Jeane Mings, wife of Edward.  Could this be Jane, wife of John Delahay, who married Edward Mings after John’s death?  Jane was 30 years old in 1659.  In 1683 she would have been only 54.

From the above examples found throughout Charles County records I believe we can say that John Delahay, who transported himself, wife Jane, and stepson James Session to the colony of Maryland before 1659, was the father of Jane Delahay and George Delahay, and probably other children.  Jane Delahay, after the death of husband John, married Edward Mings.  He is listed in George Delaney’s will, but not Jane.  She must have died before her son George.

Does this get me any closer to the father of my John C. Dillehay 1775?  No, there is too large a time gap between John Delahay in 1659 and the birth of my John C. Dillehay around 1775.  However, since John and his family during the 1600’s were the only Delahay’s in Maryland at that time, it is possible there is a connection that has not been found.  I need to search further. 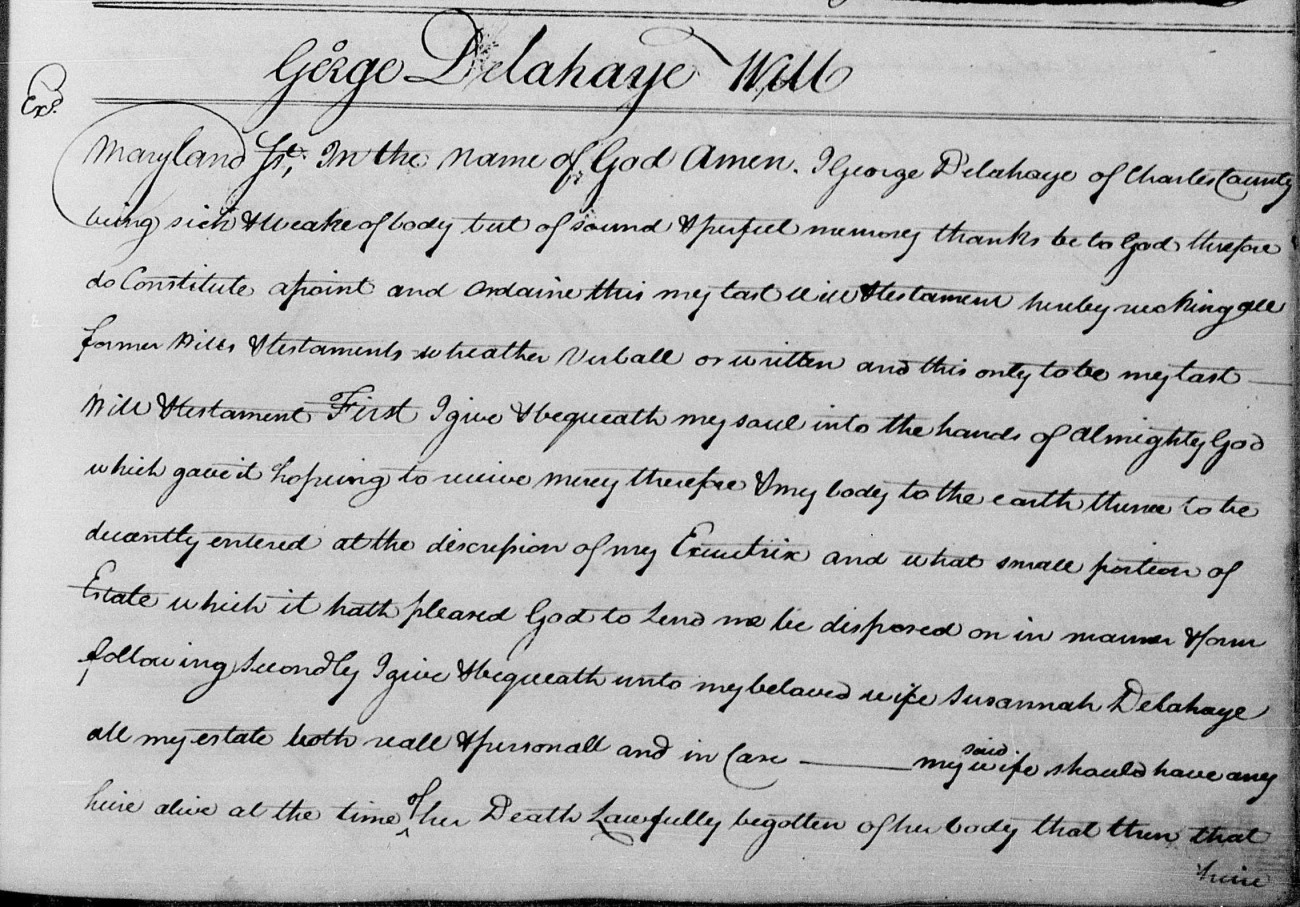 Will of George Delahaye

First.  I give and bequeath my soul into the hands of Almighty God, which gave it, hoping to receive mercy therefore, and my body to the earth, thence to be decently entered at the discretion of my Executrix, and what small portion of estate which it hath pleased God to lend me be disposed of in manner and form following.

Secondly.  I give and bequeath unto my beloved wife, Susannah Delahaye, all my estate, both real and personal and in case my said wife should have my heir alive at the time of her death, lawfully begotten of her body, then that

heir shall enjoy all my estate aforesaid, but in case my said wife die not leaving an heir as aforesaid, it is then my will and desire that all my estate of land shall fall to my sister Jane Harrison’s children, to them and their heirs and assigns forever.  Thirdly and lastly, I do make and appoint my well beloved wife, Susannah Delahaye, my whole and sole Executrix of this my last will and testament, as witness my hand and seal this twenty-fifty day of September anno 1698.

Signed, sealed and delivered in the sight and presence of

It is further the testator’s desire that his father, Mr. Ed Mings, should live on his plantation on such terms as now he doth during his life.

On the back of the foregoing will was endorsed the following probate, to wit –

December 24, 1698.  Then came before me Robert Halhead, John Hamilton and James Mackyah, the several witnesses to the last will and testament of George Delahaye, deceased, and proved the same in due manner and form according to law.