Mt. Olivet Cemetery is in the county seat by the same name.  Our interest today is for the gravestones of W. H. Tilton and Elivira Tilton.  William Henry Tilton was born March 19, 1841, in what was then Bracken County, to Jesse Lum Tilton and Rachel Elizabeth Ashcraft.  He suffered and died from influenza January 9, 1916 – two years before the Spanish Influenza outbreak.

Elmira must have been busy with four children already in the household, and a dozen more that would be added over roughly the next twenty years.  Two daughters died in infancy.

William Henry Tilton was judge of Robertson County and a successful farmer.  The following notice mentions his crops and stock. 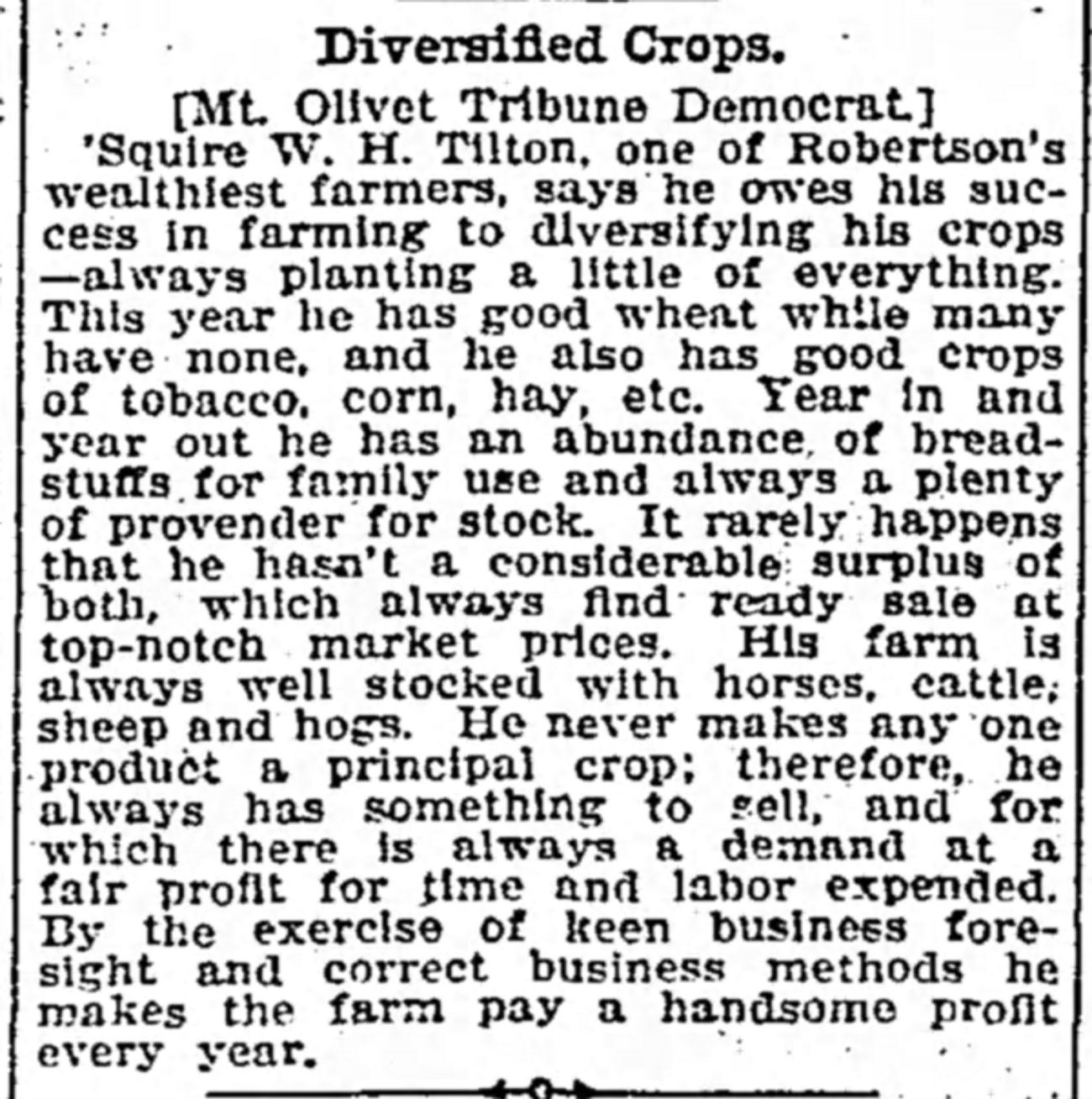 Squire W. H. Tilton, one of Robertson’s wealthiest farmers, says he owes his success in farming to diversifying his crops – always planting a little of everything.  This year he has good wheat while many have none, and he also has good crops of tobacco, corn, hay, etc.  Year in and year out he has an abundance of bread-stuffs for family use and always a plenty of provender for stock.  It rarely happens that he hasn’t a considerable surplus of both, which always find ready sale at top-notch market prices.  His farm is always well stocked with horses, cattle, sheep and hogs.  He never makes any one product a principal crop; therefore, he always has something to sell, and for which there is always a demand at a fair profit for time and labor expended.  By the exercise of keen business foresight and correct business methods he makes the farm pay a handsome profit every year.

There were no copies of the Mt. Olivet Tribune Democrat in my newspaper subscription, making it difficult to find more information on the family.  William’s will was found and gave interesting information.  His daughter Ruth was not well, unmarried, and William Henry left her additional funds to secure her future.  At the end of the will his wife and children were named, daughters with their married names.  This validated the marriage records found in the clerk’s office.

Will of William Henry Tilton

I, W. H. Tilton, of Mt. Olivet, Robertson County, Kentucky, being of sound mind and disposing memory, do make, declare and publish this my last will and testament as follows:

First Clause.  At my demise I desire that my estate, real personal and mixed, wheresoever located and situated, pass to my heirs-at-law as the law now directs and that my wife take of my property as is provided by law for surviving window, and this clause of my will subject only to the next clause, and limitations, and the special bequest therein made.

Second Clause.  I specially devise to my daughter, Ruth W. Tilton, ten thousand dollars ($10,000) in U.S. government bonds, which said bonds are now at the Bank of Maysville, in Maysville, Kentucky, and to her in trust only, she to receive the income from same for and during her natural life, and at her death said bond to then pass as a part of my estate, and in the manner set out I clause one of this will, that is, to my then living heirs as the law of descent and distribution directs.  I do not mean to limit the said Ruth W. Tilton to this bequest, but that she share in the residue of my property, share and share like with my other heirs, and in addition thereto, this special bequest is made to her because of her affliction, and I am desirous of her providing securely for her a support.

Third clause.  I designate my sons-in-law, Dr. N. A. Jett and W. H. Claypoole trustees, to act jointly, and to take charge of the aforesaid bonds and to see to it that my daughter, Ruth W. Tilton, receives the income from same, and I desire that they be permitted to act without bond, and that they make no charges for their services.

nequest to my daughter Ruth W. Tilton, I specially devise to her $1,700 in stock of the Farmers and Traders Bank of Mt. Olivet, Kentucky, in trust as aforesaid, to be taken over by my herein named trustees and subject to all the conditions set out in clause 2, and to pass at her death to my heirs as above provided.

In testimony whereof I have hereunto subscribed my name, this the 31st day of March 1913.

We the undersigned witnesses witnessed the signature of W. H. Tilton to the foregoing writing, he having signed same in our presence, and we at his request hereby subscribe our names in his presence, and in the presence of each other, this the 31st day of March 1913.

I make the following change in clause three (3) of my will, to wit:  I direct that the trustees therein named jointly receive for their service 10% (ten per centum) each year of the annual income from the trust estate in their hands.  Given under my hand this June 27, 1914.

We the undersigned attest the signature of W. H. Tilton to the foregoing instrument; signed same in our presence, and we at his request sign our name in his presence and in the presence of each

State of Kentucky, County of Robertson

Dr. Jessie J. Tilton died in Spokane, Washington, in February 1927.  The following notice gives a bit more information about his father – that he was a judge of Robertson County. 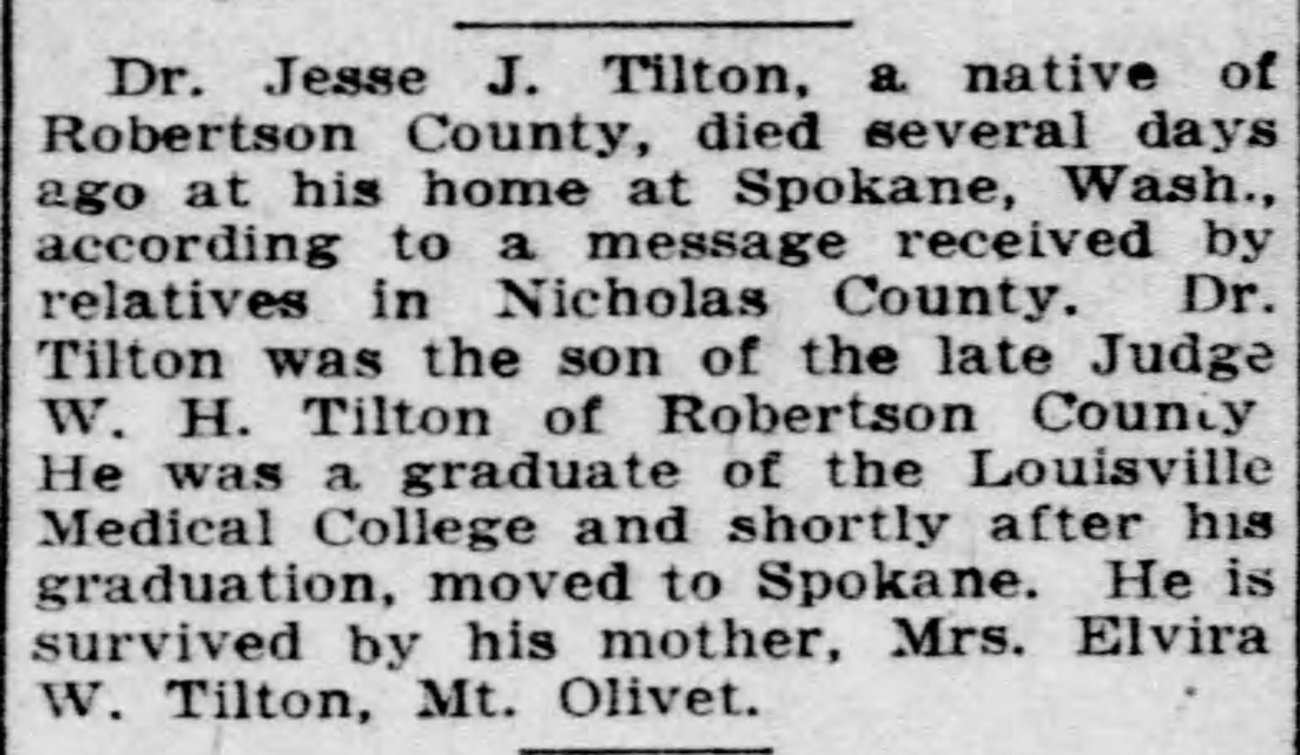 Dr. Jesse J. Tilton, a native of Robertson County, died several days ago at his home at Spokane, Washington, according to a message received by relatives in Nicholas County.  Dr. Tilton was the son of the late Judge W. H. Tilton of Robertson County.  He was a graduate of the Louisville Medical College and shortly after his graduation, moved to Spokane.  He is survived by his mother, Mrs. Elvira W. Tilton, Mt. Olivet.

Elmira Washington Bratton Tilton lived almost another twenty years before passing away March 8, 1935, at the age of 78.  No obituary was found.  Her parents, listed on her death certificate, were James Bratton and Emily Asbury.