Where Were Those Daguerreotypes, Ambrotypes and Tintypes Taken?

By Kentucky Kindred Genealogical Research on July 21, 2017 • ( Leave a comment )

After writing the blogs last week about the very old family photographs I have, I couldn’t help but think – where did they have these photos taken?  This lead to another search.  Located in Washington County, I believe they must have gone to Louisville.  It would have been the nearest large city, so that was where I focused my research.

Thomas Jefferson Dobyns was a daguerreotypist, ambrotypist and merchant, active in Memphis, Tennessee, as early as 1845.  He opened a studio in Louisville in 1847, and one in Cincinnati, Ohio, in 1848; two years later Vicksburg and Nashville contained his studios, as well as New Orleans in 1851 and New York in 1853.

According to From Pioneer Photographers from the Mississippi to the Continental Divide, by Peter E. Palquist and Thomas R. Kailbroun, Dobyns opened his ‘Daguerreian gallery in Memphis across from the Continental Hotel in late August 1845, in time to take advantage of the crowds of delegates in town to attend the Western and Southwestern Convention’ and as of June 1846, advertised that ‘he had a camera large enough to execute pictures of any size.’

As the above ad in The Louisville Daily Courier, Thursday, February 8, 1855, says, the studio is opened again and with reduced prices.  It lists itself as the oldest gallery in the city, located at the corner of Main and Third Streets.  Dobyns’ partner in Louisville was John Hewett. 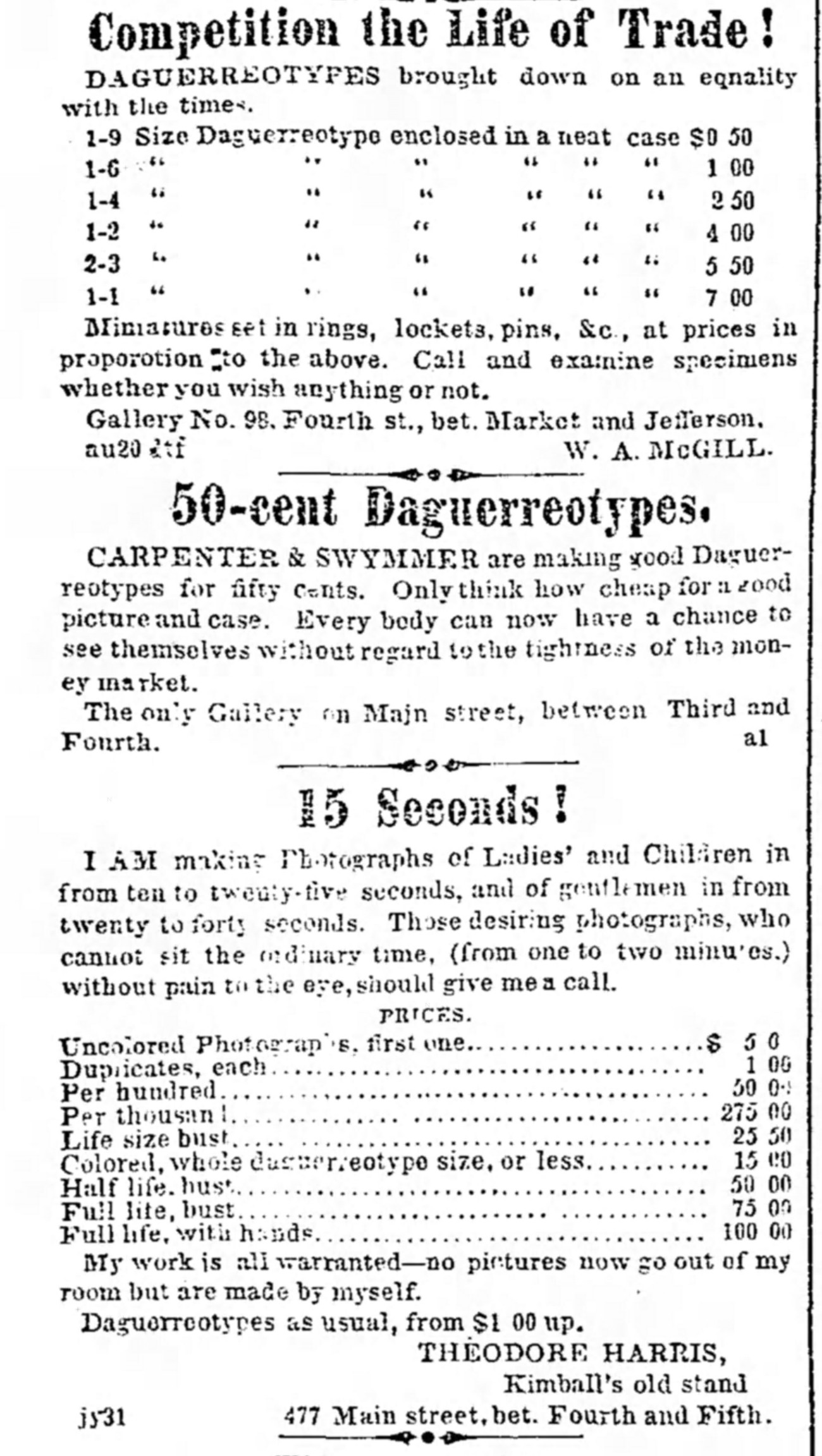 I love this advertisement from August 28, 1855, since it gives more information on the types of photographs you can choose – upon a metal plate, glass or paper, from Webster’s Gallery.

Mammoth Gallery says, ‘A blue and white Double Quick Work Sky Light, just introduced by Roesberg, at his well-known Mammoth Daguerrean Gallery, which enables him to take Pictures in a few seconds, and for the reduced price of fifty cents and upwards.  It also is one of the best lights ever known to produce a correct likeness, either of children or adults.  The red hair and blue eyes which heretofore have always been so difficult to produce, are now no longer any trouble, to give them the real artistic disposition of light and shade.’  In addition, he adds, ‘All medium size pictures that are badly taken by other artists, will be retaken over at 50 cents, and if not bettered no charge is made for trying.’

At Brown’s Gallery, an athanotype is ‘a photograph on glass, a picture of exquisite beauty, holding place above daguerreotypes or the ordinary photograph.  The picture is held between plates of glass, and securely protected from all influence of atmosphere, dampness, and even acids, hence it bears every guarantee of durability.’

John M. Hewett, in collaboration with T. J. Dobyns, was located on Main Street between Third and Fourth Streets.  From The Encyclopedia of Louisville, by John E. Kleber, gives us an 1848 description of Hewitt’s studio, ‘as one of the most magnificent in the United States, with a reception room, 65 by 63 feet, furnished with the most costly furniture, including a ‘splendid pianoforte’ kept for the entertainment of visitors.  A separate ‘ladies’ toilet’ was similarly furnished.  Both of these areas were separate from the room where likenesses were taken, which had a ‘magnificent light and is equal to the other rooms spoken of.’  All were ornamented with likenesses ‘of the most eminent men and the most beautiful ladies in the United States.  The Filson Club owns a fine set of daguerreotype portraits by Hewitt, and his work is also found in Louisville family collections.  The studio does not appear in directories after 1856.  In 1852, 23 people engaged in making daguerreotypes that year – only eight studios are listed in the city directory for 1851-52, so they employed an average of two to three individuals.’

From the same book, we learn that during the 1850’s several studios were founded – Webster and Brother (Edward Z. and Israel B. Webster), Theodore Harris, Daniel Stuber and Edward Klauber.

It would be wonderful to know for sure which studio(s) my family visited for their daguerreotypes, ambrotypes and tintypes!