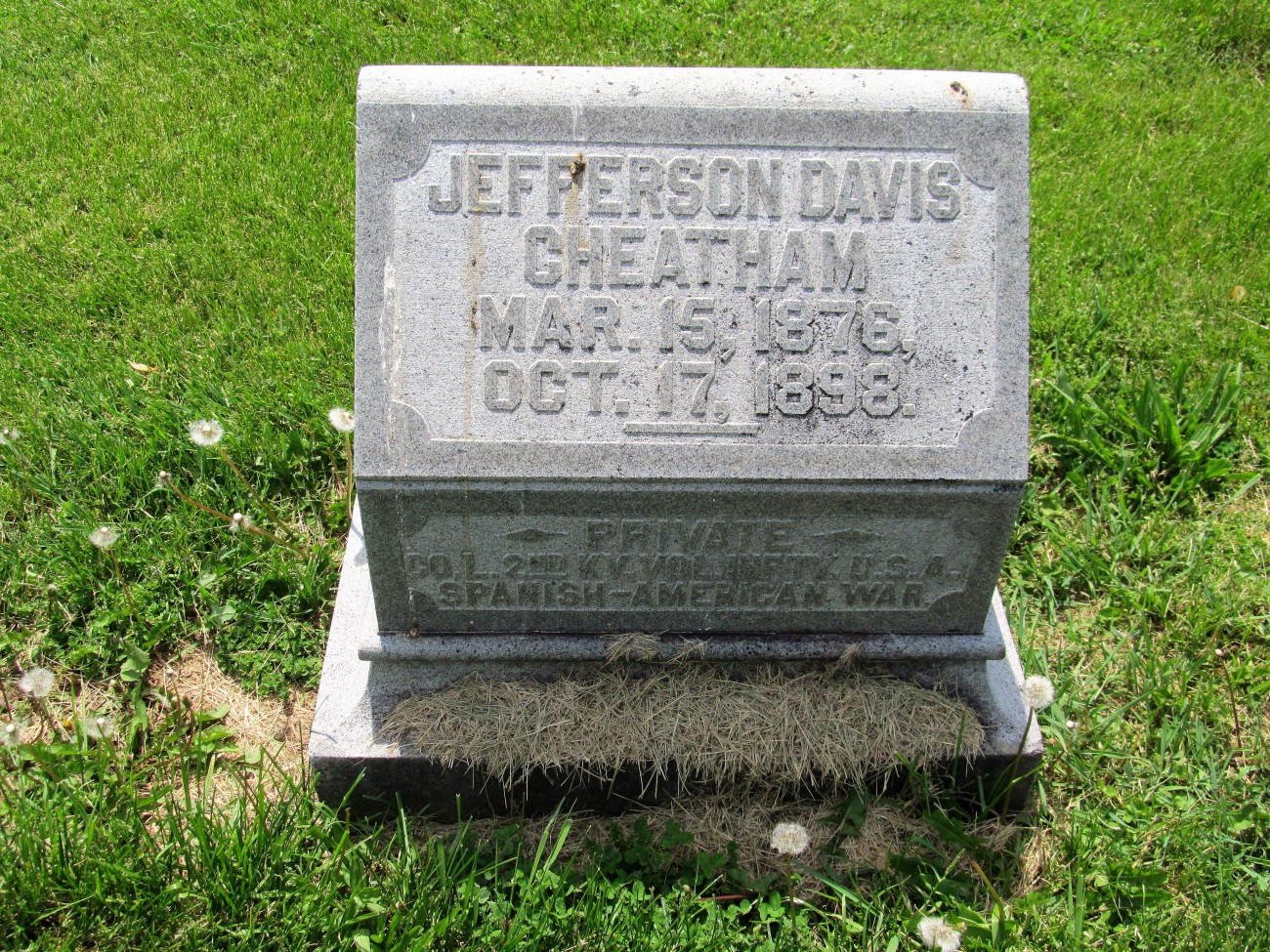 The Spanish-American War unit from Lancaster, Garrard County, Kentucky, was comprised of a group of about 42 men.  The Lancaster Company, as it was locally called, Company L (originally C) of the Second Regiment from Kentucky, left for Lexington, Kentucky, on the morning of May 6, 1898.  On May 27, they left for Chickamauga, Georgia.  Overcrowded conditions at the camp led to a typhoid fever epidemic, resulting in the deaths of two of the Lancaster Company’s men – Clarence Parks and Jefferson Davis Cheatham.  The regiment returned to Lexington on September 13, 1898, and were mustered out on October 31, 1898.

On April 23, Sam McKee Duncan, of this city, received authority from Gov. Bradley to raise a company of volunteers to join the regular army for services in the war with Spain.  In less than forty-eight hours from that time Mr. Duncan had received more than enough signers to his muster roll to form a company.  The company was ordered to Lexington, the place of mobilization, and will leave on a special train for that point early this (Friday) morning.  Mr. Duncan will be elected Captain, John M. Farra, 1st Lieutenant and C. G. Wherritt 2nd Lieutenant.  The non-commissioned officers will be appointed later on.  The company will be lettered ‘C’ and be in the Second regiment.  Following is a list of those composing the company, and their ages.

The Lancaster company has been ordered to leave on the 8 o’clock train tomorrow (Friday) morning.  They will march to the depot, headed by the Lancaster band.  A large crowd will be present to see the boys off.

The second Regiment, of which the Lancaster Company is a member, was ordered to Chickamauga and went to that point Wednesday afternoon.  The men had not received their uniforms or guns, but will receive these at the new quarters.  Lieut. John M. Farra, who was here Sunday, tells us the general impression is the boys will remain at Chickamauga for at least three months and then probably be ordered to either Marila or Cuba.  He says that if the war is brought to a close even within the next month, that U. S. troops will be needed in Cuba until a stable government is established.  He says our men are all in good spirits and are delighted at the idea of going south.  He says the boys are slightly disappointed at not getting their uniforms, but they are happy as larks.

Mr. Jeff Cheatham has returned to Chickamauga, after a brief visit to his parents.

As stated in the last issue of The Record, Private Clarence Parks was brought home from Chickamauga last week quite ill.  He had typhoid fever and been discharged from the hospital to come home.  We understand, though are not prepared to say for certain, that Parks ate some solid food on the train.  This, together with the jostling of the cars, gave him a back set from which he never rallied.  He reached the home of his parents, on the new Danville Pike, about two miles from town, and died there Sunday night.  Parks was about twenty-two years old and bore a splendid reputation for honesty, sobriety and industry.  He was among the first to enlist and, we learn from an officer, made one of the best soldiers in the company.  The remains were placed in the cemetery vault until Tuesday when they were interred in the family burying ground near Hyattsville.

Mr. Jeff Cheatham, 23 years of age, died at his father’s half-past 4 o’clock on Monday evening, the interment was at the Fork church.  The bereaved family have the sympathy of the entire community.

The Lancaster company, which served in the recent war, did a handsome and noble act in placing tombstones over the graves of their dead comrades, Clarence Parks and Jefferson Cheatham, who died from fever during the company’s stay at Chickamauga.  A sum of money was raised here to buy the company a flag, but the boys concluded to take it, and their share of the profits from the canteen and use it for the purpose above stated.  The two made about $130, which bought handsome monuments for the dead soldiers.