1829 Will of John Duncan of Nelson County

By Kentucky Kindred Genealogical Research on January 3, 2018 • ( Leave a comment )

The Duncan and Lewis families were relatives of my Linton family.  They settled in northern Nelson County, in the Bloomfield area, near the Spencer County line.  Port Gibson, mentioned in the will, is located in Mississippi. 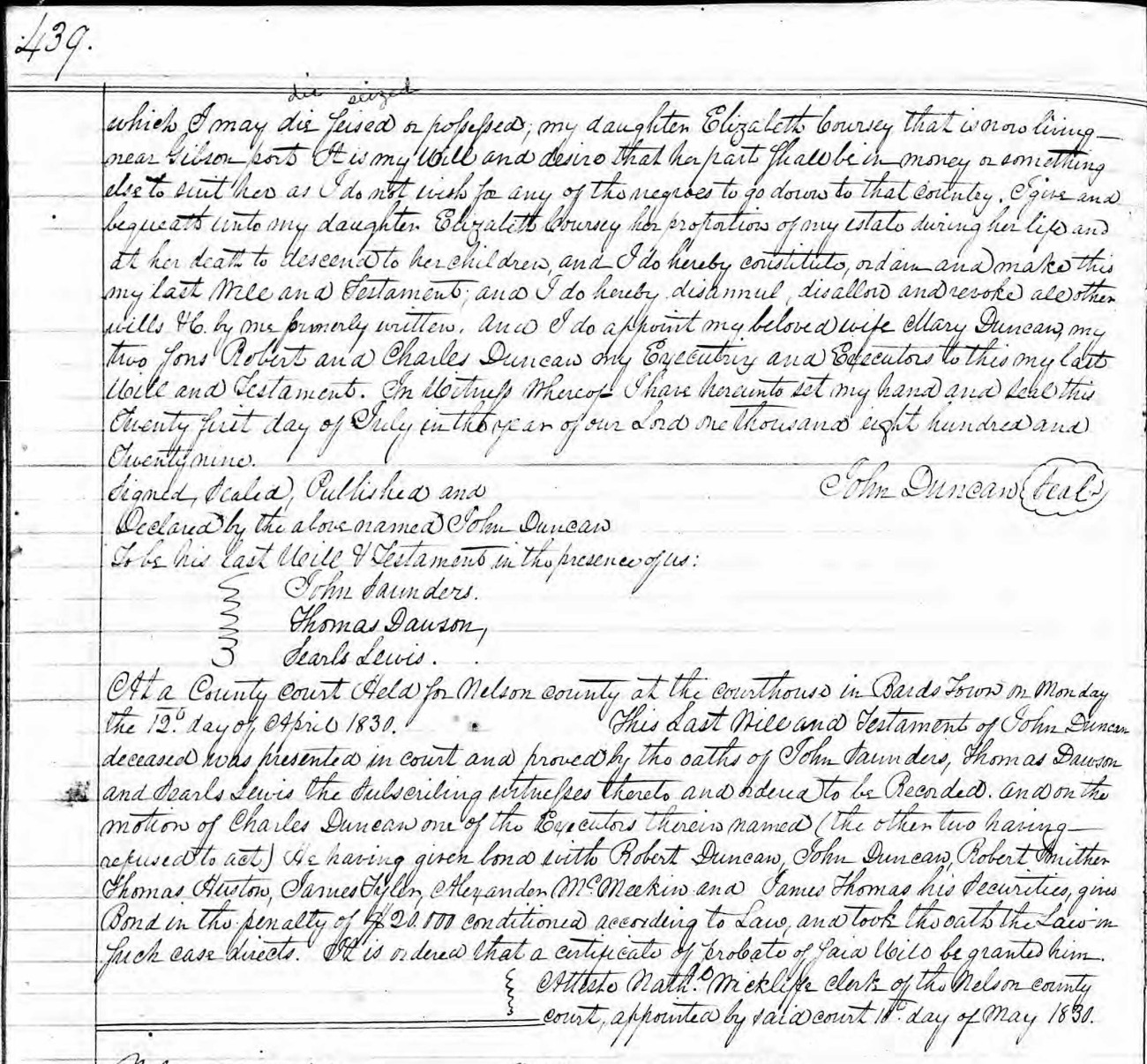 I may die seized or possessed, my daughter Elizabeth Coursey that is now living near Gibsonport, it is my will and desire that her part shall be in money or something else to suit her as I do not wish for any of the Negroes to go down to that country.  I give and bequeath unto my daughter Elizabeth Coursey her proportion of my estate during her life and at her death to descend to her children, and I do hereby constitute, ordain and make this my last will and testament, and I do hereby disannul, disallow and revoke all other wills by me formerly written.  And I do appoint my beloved wife, Mary Duncan, my two sons, Robert and Charles Duncan, my Executrix and Executors, to this my last will and testament.  In witness whereof I have hereunto set my hand and seal this twenty-first day of July in the year of our Lord one thousand eight hundred and twenty-nine.

Signed, sealed, published and declared by the above named John Duncan to be his last will and testament in the presence of us:

At a County Court held for Nelson County at the courthouse in Bardstown on Monday the 12th day of April 1830.

This last will and testament of john Duncan, deceased, was presented in court and proved by the oaths of John Saunders, Thomas Dawson and Searles Lewis, the subscribing witnesses thereto and ordered to be recorded and on the motion of Charles Duncan, one of the executors therein named (the other two having refused to act), he, having given bond with Robert Duncan, John Duncan, Robert Smither, Thomas Huston, James Tyler, Alexander McMeekin and James Thomas, his securities, gives bond in the penalty of $20,000 conditioned according to law and took the oath the law in  such case directs.  It is ordered that a certificate of probate of said will be granted him.  Attest.  Nathaniel Wickliffe, Clerk of the Nelson County Court, appointed by said court 12th day of May 1830.