By Kentucky Kindred Genealogical Research on January 3, 2019 • ( Leave a comment )

Sanford Brent entered the medical department of Transylvania University at Lexington and graduated with high honors in 1824.  December 7, 1826, he married Nancy Scott, of Henry County.

The following will of Sanford Brent is one of the most interesting I have read.  He gives his children what he feels each needs and deserves according to how much he has helped them through the years.

Will of Sanford Brent

Know all men by these presents, that I, Sanford Brent, of the County of Henry and State of Kentucky, being now in the eighty-first year of my age and feeling admonished that I must soon go the way of all the earth make this acknowledgement.

I have lived in the quest of salvation by the Lord Jesus Christ and hope to be saved by grace through faith in the person and righteousness and atoning blood of Christ.  I make this my last will and testament in the manner and form following.

I wish my body to be buried in decent and plain manner and no unnecessary expense, and that  my funeral expenses be first paid and then all my just debts.

I am owing money and know not how it can be paid without selling some of my land.  My executor in consultation will have to determine that matter with my wife and children who are interested in the matter.  My wife, as a matter of course, will take her third.  My daughter, Elizabeth Jane Hughley, has no children and is sufficiently provided for.  I give her ten dollars to buy something to remember me; this I do because she does not need any more.

My son, William Brent (who lives in Orange County, Indiana) I gave him a better education than I could give to some of my other children, and when he was married I helped to fix him up in housekeeping and have since paid several hundred dollars as security for him, and in justice to my other children I cannot give him any more.

My son Sanford Brent, I gave him a collegiate education and helped him to housekeeping and have helped him several times since and can give him nothing more.

My daughter Eliza Ellen, who married James Bryer, I helped her to housekeeping and gave her some stock and I have been paying James Bryer 10 percent interest this ten or twelve years for borrowed money.  I feel in justice that I cannot give her children any more (she having died).  She left four promising boys that I love very much, but they will be much better provided for than I can do for mine.

My son George Brent I helped to go to housekeeping.  (He is now dead.)  He has four children.  I will them fifty dollars each to be paid to their guardian in two years after my death.

I will to my son Newton Brent one hundred dollars, and also to his little daughter, Eliza Ellen, who is now living with me, one hundred dollars and a sorrel mare colt which I have told her she shall have, the money to be paid in two years after my death. 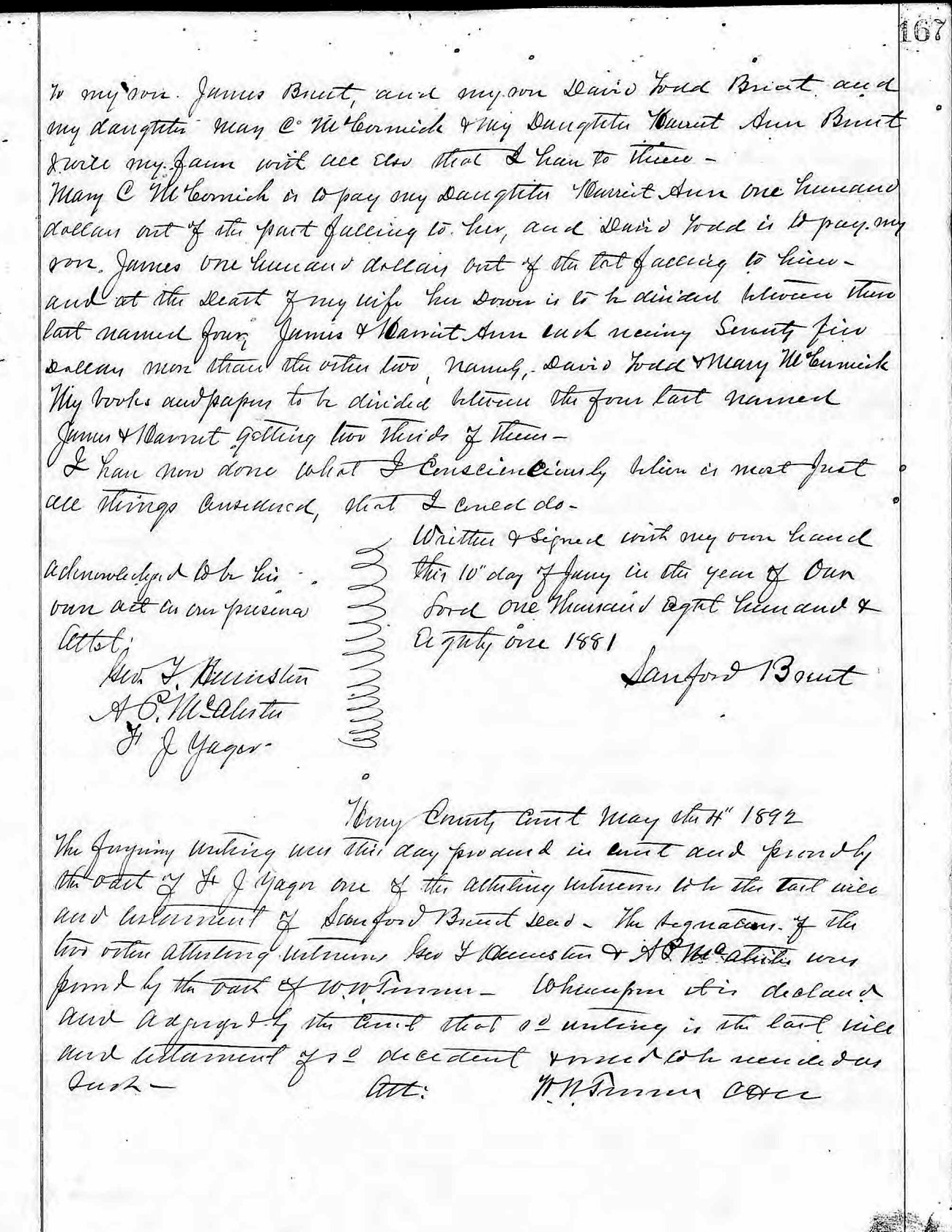 Mary C. McCormick is to pay my daughter Harriet Ann one hundred dollars out of the part falling to her, and David Todd is to pay my son James one hundred dollars out of the lot falling to him, and at the death of my wife, her dower is to be divided between the last named four – James and Harriet Ann each receiving seventy-five dollars more than the other two, namely, David Todd and Mary McCormick.  My books and papers to be divided between the four last named, James and Harriet getting two thirds of these.

I have now done what I conscientiously believe is most just, all things considered, that I could do.

Written and signed with my own hand this 10th day of January in the year of our Lord one thousand eight hundred and eighty one 1881.

Acknowledged to be his own act in our presence

The forgoing writing was this day produced in court and proved by the oath of F. J. Yager, one of the attesting witnesses to the said will and testament of Sanford Brent, deceased.  The signatures of the two other attesting witnesses, George F. Hurristen and A. C. McAllister was proved by the oath of W. W. Turner.  Whereupon it is declared and adjudged by the Court that said writing is the last will and testament of said decedent and would be recorded as such. 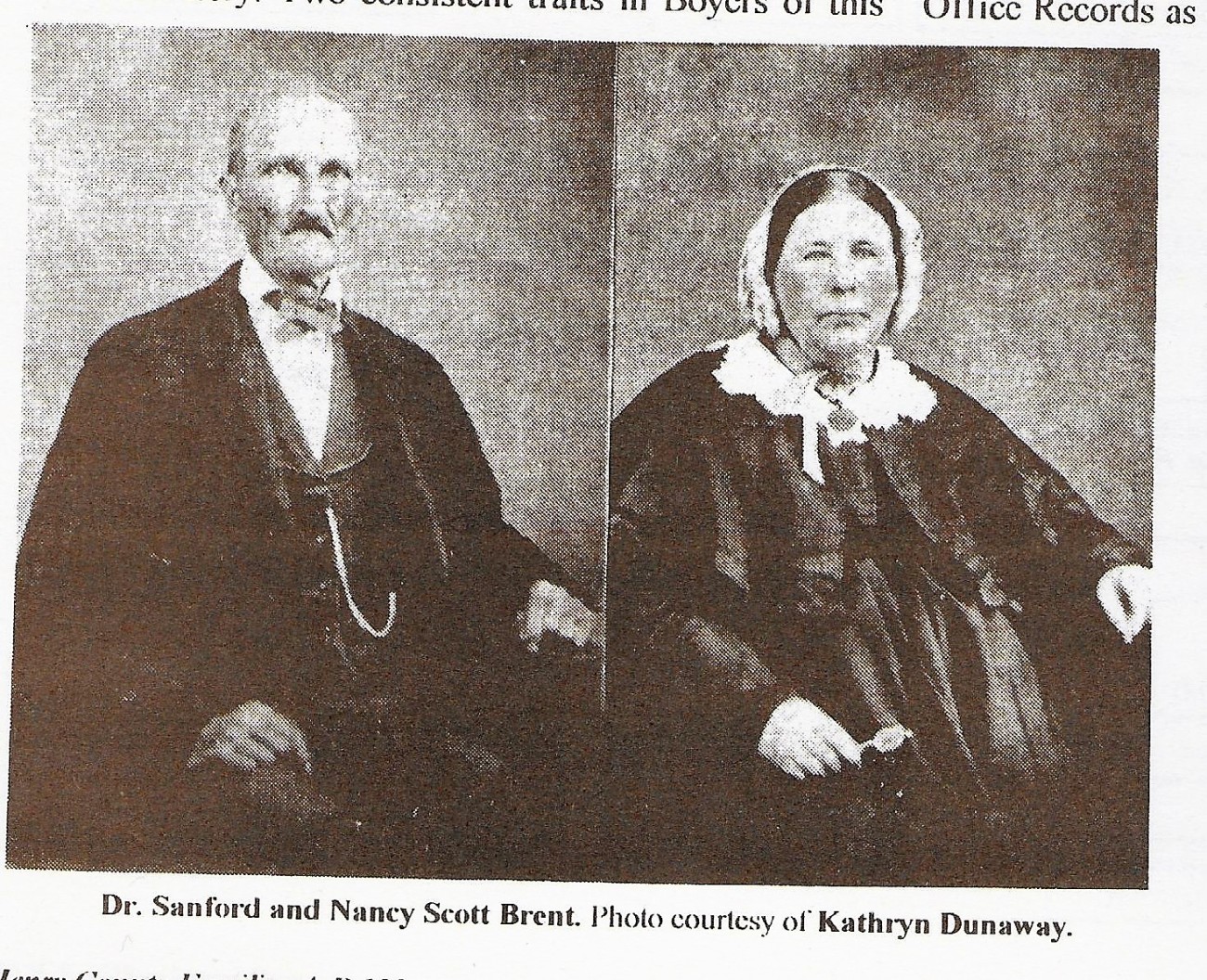