1863 Will of Henry Lyons – Marion County

By Kentucky Kindred Genealogical Research on January 12, 2019 • ( Leave a comment )

I have looked for many years to find a connection with my great-great-grandmother, Ellen Lyons, to any of her brothers and sisters or her parents.  In reading this will today I find her brother Henry Lyons.  Ellen Lyons married John E. Smith, from Washington County.  Their marriage bond probably went up in flames when John Hunt Morgan torched the Marion County Courthouse during his visit there in July of 1863.

I do know her last name was Lyons due to a baptismal record for one of their children, John Richard Smith, at St. Charles Catholic Church in the county.  Augustine Lyons was the father of Ellen, Henry, George Washington and Susan Mary Lyons.  We know that Henry married Mrs. Isabella Johnson; Susan Mary married Thomas Bartley; and George Washington married Cecilia Peterson.  In 1863 when Henry Lyons’ will was written, he mentions his brothers and sister and his sister Ellen Smith’s children, along with half brothers and sisters.  Ellen died in 1859. 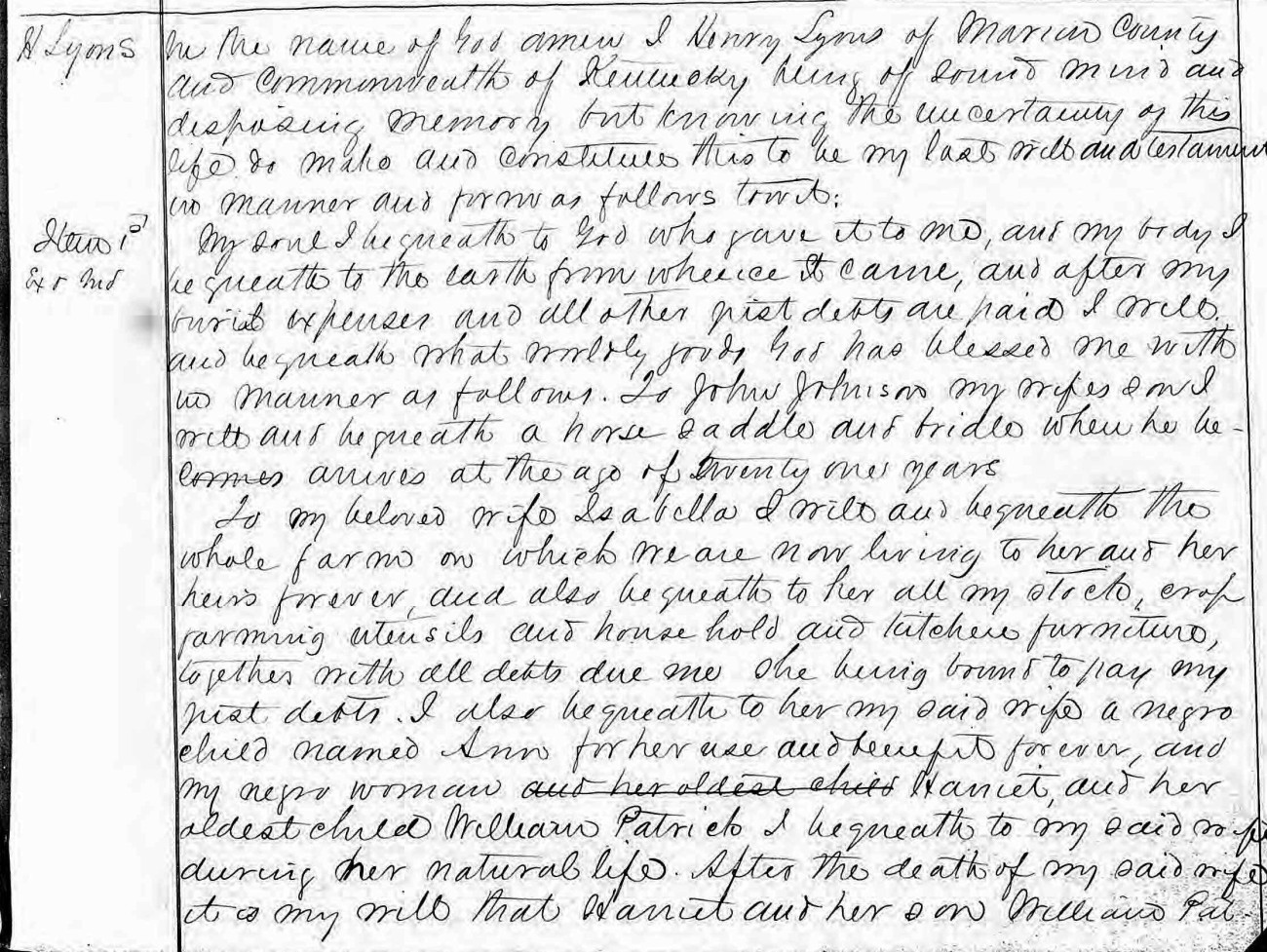 Will of Henry Lyons

In the name of God, amen.  I, Henry Lyons, of Marion County and Commonwealth of Kentucky, being of sound mind and disposing memory, but knowing the uncertainty of this life do make and constitute this to be my last will and testament in manner and form as follows.  To wit:

My soul I bequeath to God who gave it to me, and my body I bequeath to the earth from whence it came, and after my burial expenses and all other just debts are paid I will and bequeath what worldly goods God has blessed me with in manner as follows.  To John Johnson, my wife’s son I will and bequeath a horse, saddle and bridle when he arrives at the age of twenty-one years.

To my beloved wife Isabella, I will and bequeath the whole farm on which we are now living, to her and her heirs forever, and also bequeath to her all my stock, crop, farming utensils and household and kitchen furniture, together with all debts due me, she being bound to pay any just debts.  I also bequeath to her, my said wife, a negro child named Ann, for her use and benefit forever, and my Negro woman Harriet, and her oldest child William Patrick.  I bequeath to my said wife during her natural life.  After the death of my said wife it is my will that Harriet and her son William Patrick 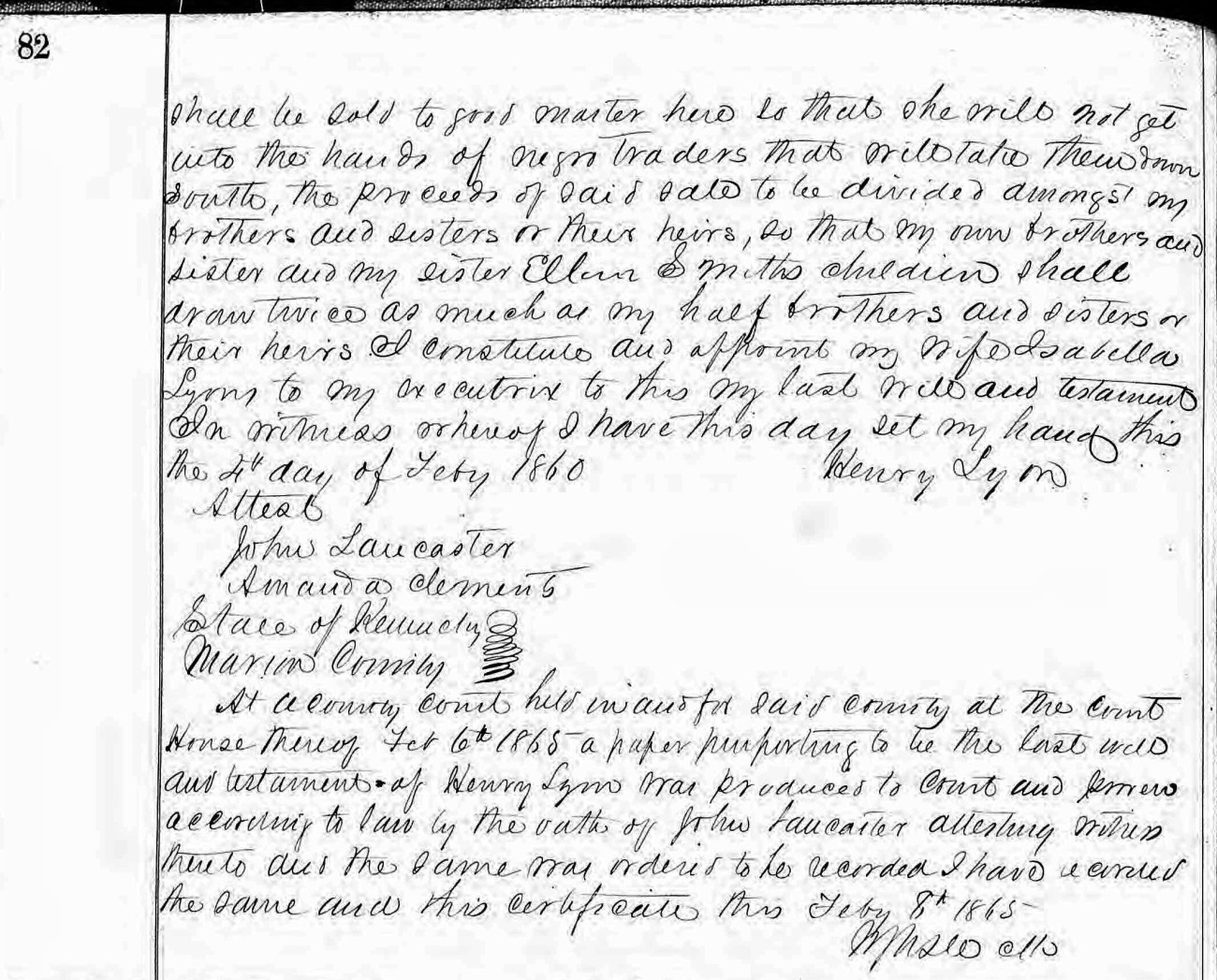 shall be sold to a good master here so that she will not get unto the hands of Negro traders that will taken them down south, the proceeds of said sale to be divided amongst my brothers and sisters or theirs heirs, so that my own brothers and sister and my sister Ellen Smith’s children shall draw twice as much as my half brothers and sisters or their heirs.  I constitute and appoint my wife, Isabella Lyons, to my executrix to this my last will and testament.  In witness whereof, I have this day set my hand, this the 4th day of February 1860.

At a County Court held in and for said county at the courthouse thereof, February 6th, 1865, a paper purporting to be the last will and testament of Henry Lyons was produced to court and proven according to law by the oaths of John Lancaster, attesting witness thereto and the same was ordered to be recorded.  I have recorded the same and this certificate this February 8th, 1865.  J. Musee, CMC