Today my mother would have been 88 years.  This is one of those bittersweet memories we all have.  Catherine Lyons Carrico Hill was a remarkable woman in many ways.  She loved life.  She loved her family.

There was always mention of food when you entered the door of my mother’s house.  It didn’t matter what time of day or night – she always wanted to feed you.  Mother lived in Burgin, the small town four miles from Harrodsburg, where I worked as finance officer at the school for 25 years.  Most days I visited her for lunch.  Sometimes she cooked, sometimes I brought leftovers.  It was during these years that we developed, perhaps I should say reinforced, the strong relationship that was our bond throughout our lives – and even beyond.

During lunch we talked, she told stories of her days on the farm as a young girl.  She was a wild child, as was her younger sister, Mary Alice.  They climbed to the top of sycamore trees, where they could feel the small branches move under their weight.  Swinging on grapevines was another delight – one their mother never knew about – as well as riding the old mules, Rowdy and Mike.  Racing across the fields, holding on for dear life.  She never wanted us out of eye site – I’m sure she thought we would follow in her daring footsteps.

When in grade school she walked two miles to the local one room school.  In second grade, she and Ruth Smith sat at a small table together – the only ones in that class – and started a friendship that lasted until the end.  Mom attended Frederickstown High School, riding 17 miles on a bus.  I can’t remember if that was one way or the round trip.

After high school my mom had several jobs.  She worked at the 10 cents store in Lebanon.  She went to Louisville with Ruth to study nursing.  Mom loved the job but hated the city.  She returned to Springfield after a year.  She worked at a sewing factory until she married. 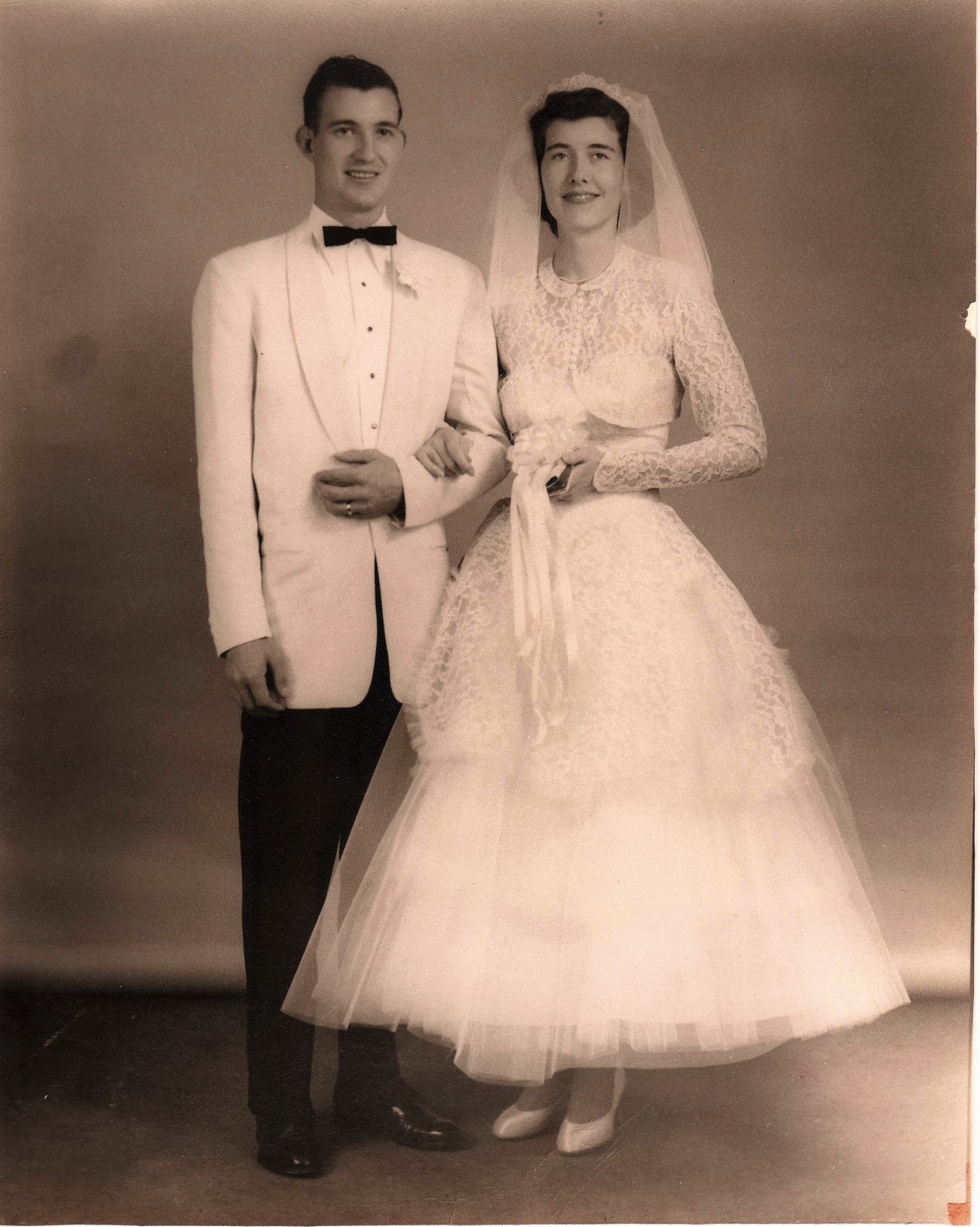 Mom and Dad married April 7, 1956, at St. Rose Church in Washington County.  Five children came along during the next twenty years.  I am the oldest, Donna, Carolyn, Jimmy and Laura.  I was nineteen when Laura was born.

My dad passed away at the young age of 50 on the 17th of July 1986.  After that mom’s strength dwindled.  Her inner strength.  But she persevered.  She still had a nine-year-old at home, plus a college-aged son; the three oldest were married.

When I think of the Easters with big meals and egg hunts for the grandkids, Christmases and presents under the tree, birthdays, or no special occasions at all, mom is at the center of those memories.  Wonderful times spent together with laughter and sometimes a few tears.

Mother loved to celebrate her birthdays.  The momentous ones were celebrated with dinners out and in grand fashion, but even the yearly events always included flowers, presents and cake.  And we were happy to shower her with everything to make her happy.

But when Alzheimer’s began to affect her, especially after several years, it was hard to watch this strong woman lose her ability to remember day to day activities, although the old stories were still there.  She spent the last month of her life in a nursing home and I was told one night she walked past the nurses’ station about 2:00 a.m. and one of the nurses said, ‘Mrs. Hill, do you know where you’re going?’  Mom promptly turned around and said, ‘I’ve been a nurse here for forty years.  Of course I know where I’m going!’  Even under the dim memories there was still a staunch reply coming from this woman I called my mother.  That makes me smile.

She died two weeks later.  I was with her six days before her death.  We had a lovely conversation, but she didn’t know who I was.  It didn’t matter, I knew who she was.  When I left, we kissed and said I love you at the same time!  Then laughed about it.  Later that night she became unconscious and remained so until the end.

It’s hard to shed tears for someone who has lived fully, loved life and the people in that life.  Of course I miss mom.  But I dwell more on what she has missed – my two grandchildren were born afterwards; six other great-grandchildren have been born.  These precious little ones will never know this glorious woman or experience life with her.  Persephone is too small, but Julian and I look at the pictures of our ancestors.  And I have many of his great-grandmother to show him, to make her memory live on, even in the heart of one who did not know her.