Wizard of the Ivories 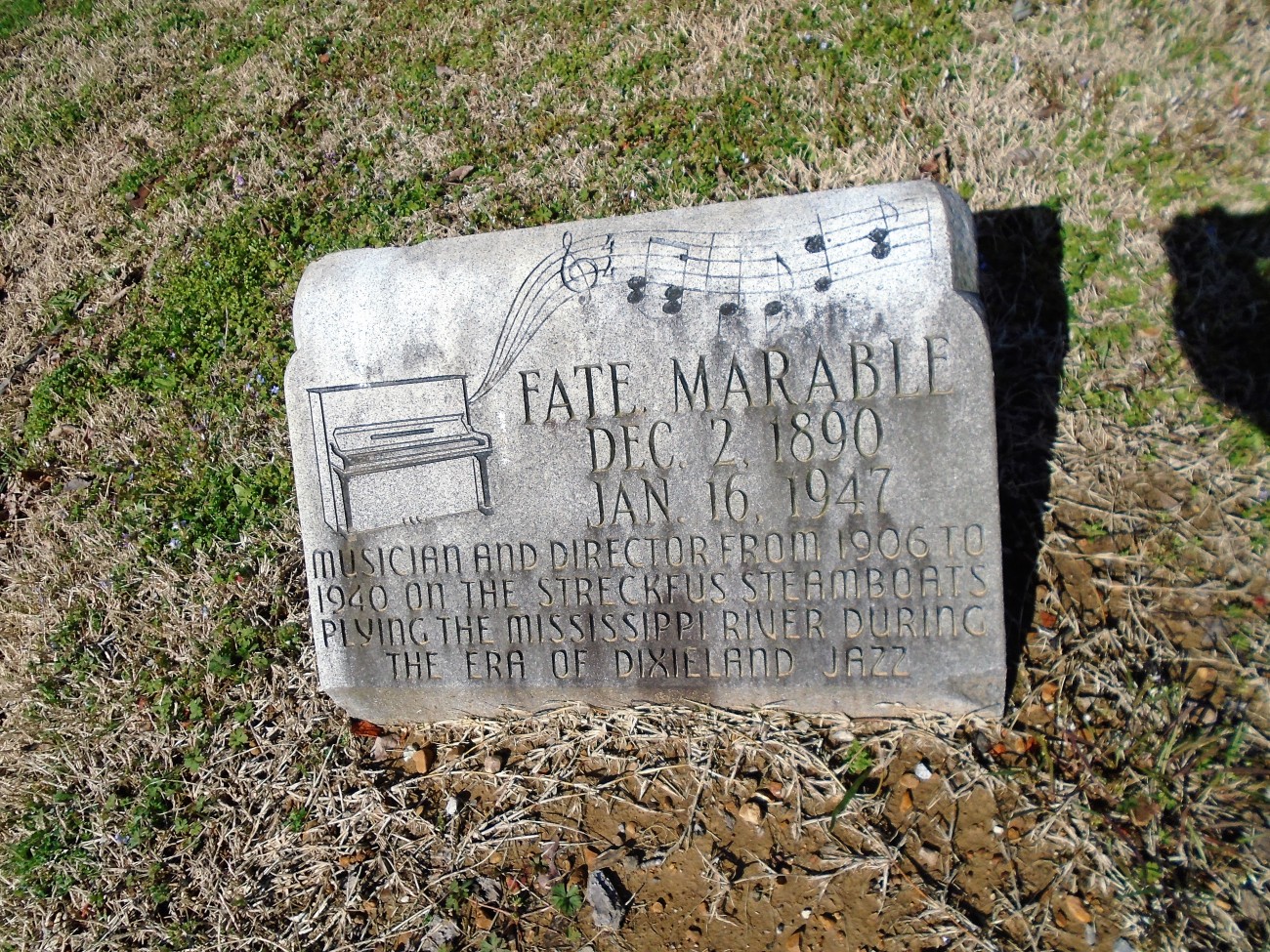 Fate Marable, December 2, 1890 – January 16, 1947.  Musician and director from 1906 to 1940 on the Streckfus Steamboats plying the Mississippi River during the era of Dixieland Jazz.  Oak Grove Cemetery, Paducah, McCracken County, Kentucky.

One of the most interesting gravestones in Oak Wood Cemetery in Paducah, is that of Fate Marable.  My attention was immediately drawn because the piano and music notes rolling out from it called my name.  Although I play rarely now, my piano was a very important part of my life from about twelve till I married.  Almost as important as genealogy!  And to find a famous jazz pianist buried in this Paducah cemetery was fascinating.

Fate Clifford Marable was born in Paducah December 2, 1890, the son of James and Elizabeth Wharton Marable.  He was the oldest of five children; his sisters were Mable and Neona – brothers were James, Jr., and Harold.  Elizabeth Marable was a piano teacher and specifically told her son not to touch the instrument.  He didn’t while she was at home but did while she was away.  After taking notice of her son’s talent she gave him piano lessons, and he learned to read music.  This was something he incorporated into his band – most of them played by ear.  Learning to read music helped them become better musicians and helped their careers later in life.  Zutty Singleton, his drummer at one time, would tell new hires, ‘Well, you’re going to the conservatory.’

At the age of 17 Fate began playing on the steamboats that traveled up and down the Mississippi and Ohio Rivers.  He started as the calliope player.  It was a difficult job because of the pressure from the steam, so he wore gloves to protect his hands from the hot keys, stuffed his ears with cotton due to the volume of sound, and wore raingear to keep from getting wet from the spewed steam and water.  Playing calliope in that day was difficult because the steam produced so much pressure the keys were hard to hold down, and pitch varied with steam pressure.  Fate must have been very good at his job.

He soon became the pianist and bandleader for a paddle wheeler on the Streckfus Line, running from New Orleans to St. Paul, Minnesota.

Music and his piano were Marable’s life.  In 1940 a severely infected finger forced him off showboats and away from the piano, but by the mid 40’s he was back at the keyboard at the Club Windsor and the Victoria Club in St. Louis.  He continued as a musician until his death on January 16, 1947.  He deserved his title ‘Wizard of the Ivories.’ 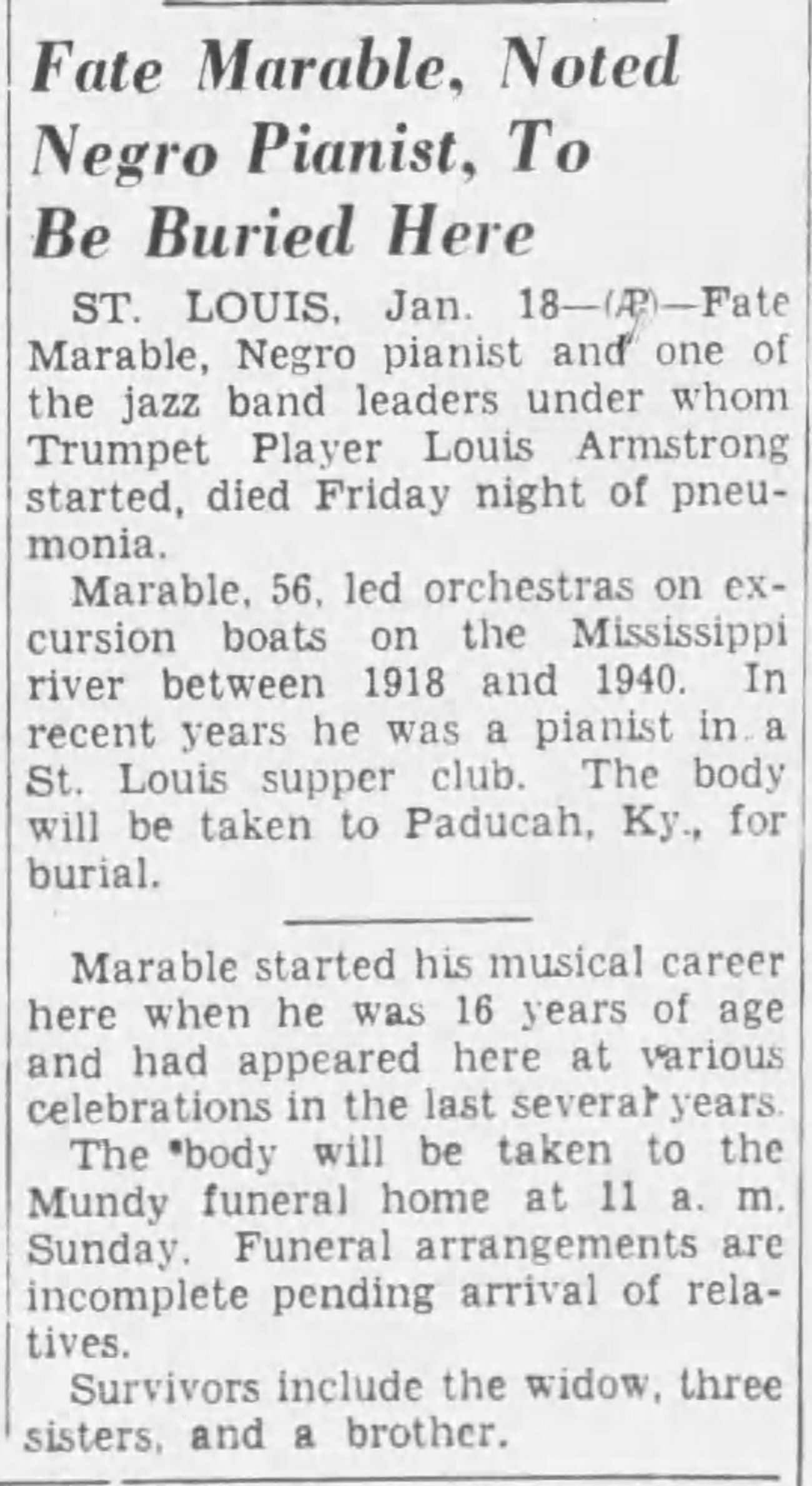 Marable, 56, led orchestras on excursion boats on the Mississippi River between 1918 and 1940.  In recent years he was a pianist in a St. Louis supper club.  The body will be taken to Paducah, Kentucky, for burial.

Marable started his musical career here [Paducah] when he was 16 years of age and had appeared here at various celebrations in the last several years.

The body will be taken to Mundy funeral home at 11 a.m. Sunday.  Funeral arrangements are incomplete pending arrival of relatives.

Survivors include the widow, three sisters and a brother.

In another obituary from the St. Louis Post-Dispatch it said Marable was survived by two sons and a daughter.