Today when one thinks of a wedding, a white dress covered with lace comes to mind.  Not so in in the nineteenth century – most wedding dresses were any color other than today’s white.  A reader told me about a green wedding dress that her third great-grandmother wore on her wedding day in 1849.  And she invited me to come see it.  Even though I have many photographs from the 1840’s through the mid 1900’s, other than in a museum I’ve never seen a dress that was 170 years old!  And she allowed me to photograph the dress to share with you. 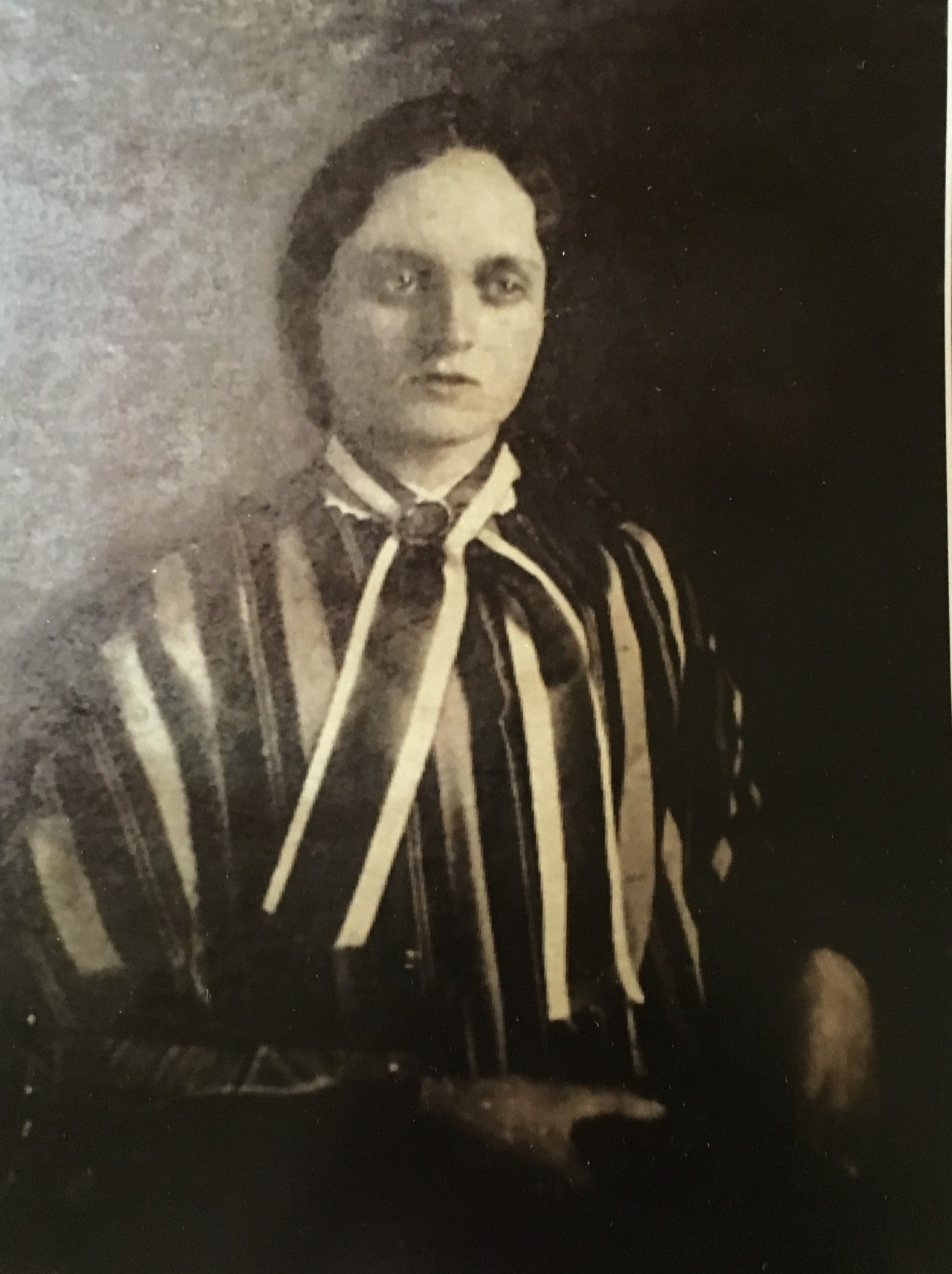 Ann Elizabeth Duerson was born August 21, 1828, in Clark County, the daughter of Richard Duerson and Mary ‘Polly’ Gaitskill.  I didn’t realize until today that two years ago I wrote about Richard and Polly.  September 9, 1849, Ann Elizabeth married William Halley Smith; he was born March 22, 1817.  The difference in age of eleven years was not unusual for that time period. 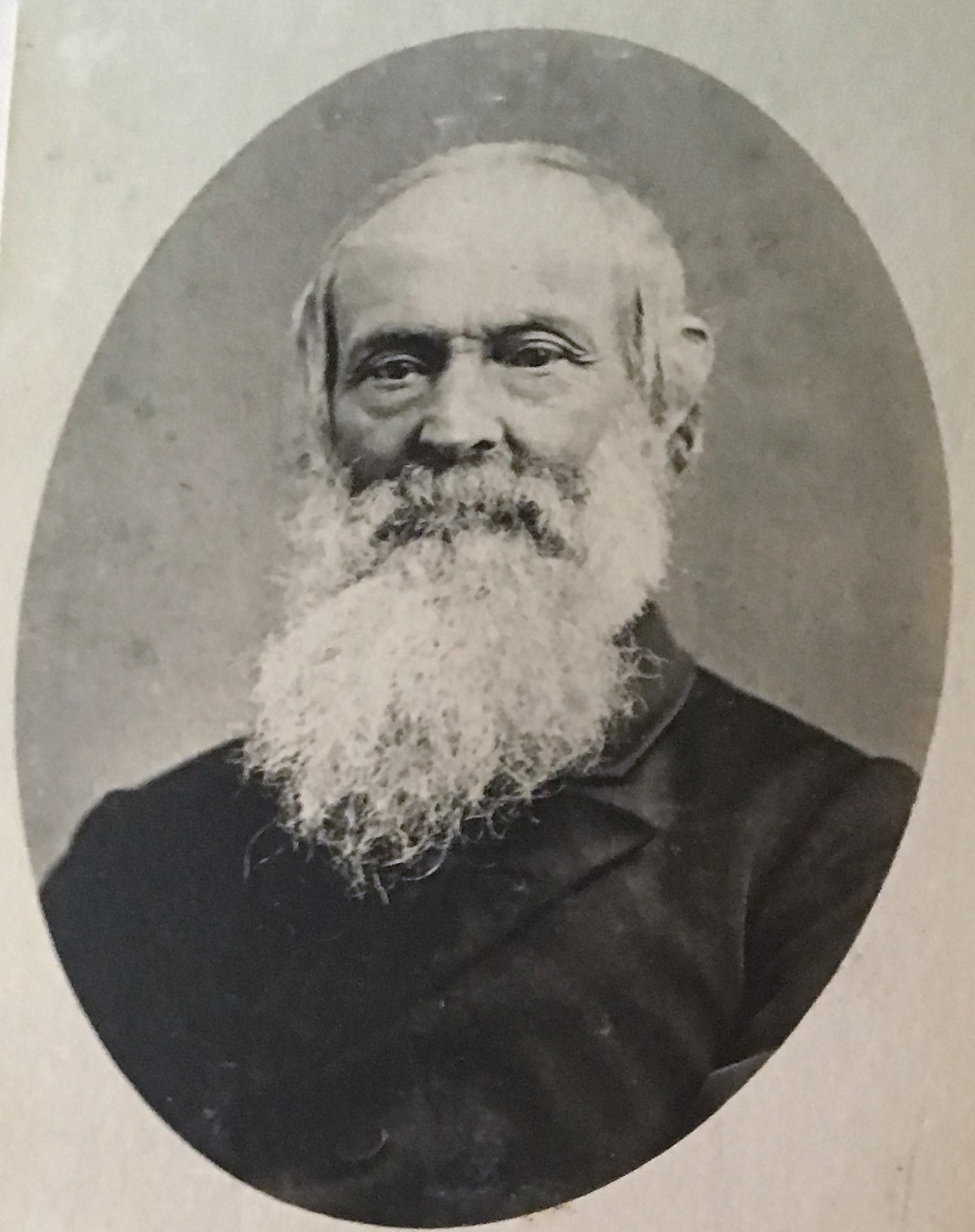 William Halley Smith was the son of Robert Thompson Smith and Harriet Wright.  On July 31, 1850, when the Montgomery County census was taken for that year, William and Ann were living with his mother and siblings.  William was 31, a merchant, Ann was 21.  Evidently she was pregnant with their son when the census was taken, Jefferson Wright Smith was born two and one-half months later on October 16, 1850.

The green wedding dress that Ann wore must have taken at least several weeks to sew.  Did Ann and her mother make this dress?  Did they hire someone?  Since William was a merchant, perhaps the beautiful material for his bride’s dress came through his store?  This dress was made for a short, tiny woman.

The bodice has the ‘V’ shaped pleating so recognizable from the late 1840’s, coming down to a point at the stomach – called a fan pleat.  This was the decade for extreme bodily construction, and the fan pleat was just that.  This pleating controlled the fullness of the material in the bodice.  Examined closely there are a series of graduated knife pleats that accomplish this.  The wide neckline suggests evening wear, which could have been enhanced by beautiful lace.  The dress has tiny cap sleeves with the solid green trim, as on the skirt ruffles.  The motif on the lighter material of the dress is a basket of flowers.

In addition to the short sleeves (possibly worn in the evening?) were detachable long sleeves. 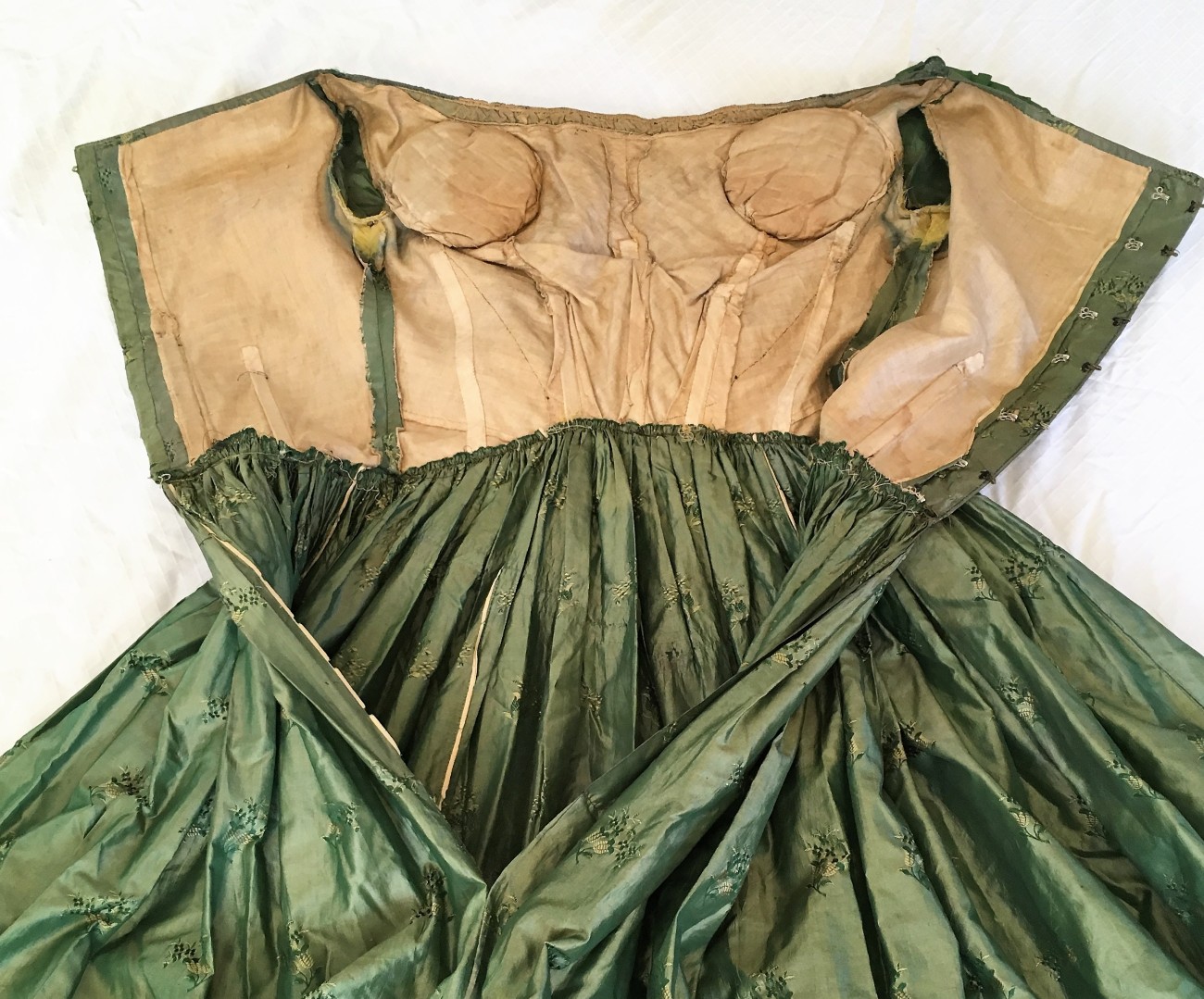 At some point the dress was altered, adding about 1 or 1 ½ inches in the back.  One of the sleeves was used for this alteration.  You can see two rows of hooks – but no eyes.  Small loops of thread were used.  You can also see two round, padded pieces sewn into the front of the dress.  In my go-to book, Dressed for the Photographer by Joan Severa, she mentions that some silk winter dresses had thicker padding above the bosom, specifically for warmth.

The inside bodice and back of the dress are lined, as is the lower portion.  Dresses were made to touch the floor and this lining protected the skirt from wear.  And under the dress, in addition to petticoats, would be the dreaded corset, very flat down the front and over the abdomen. 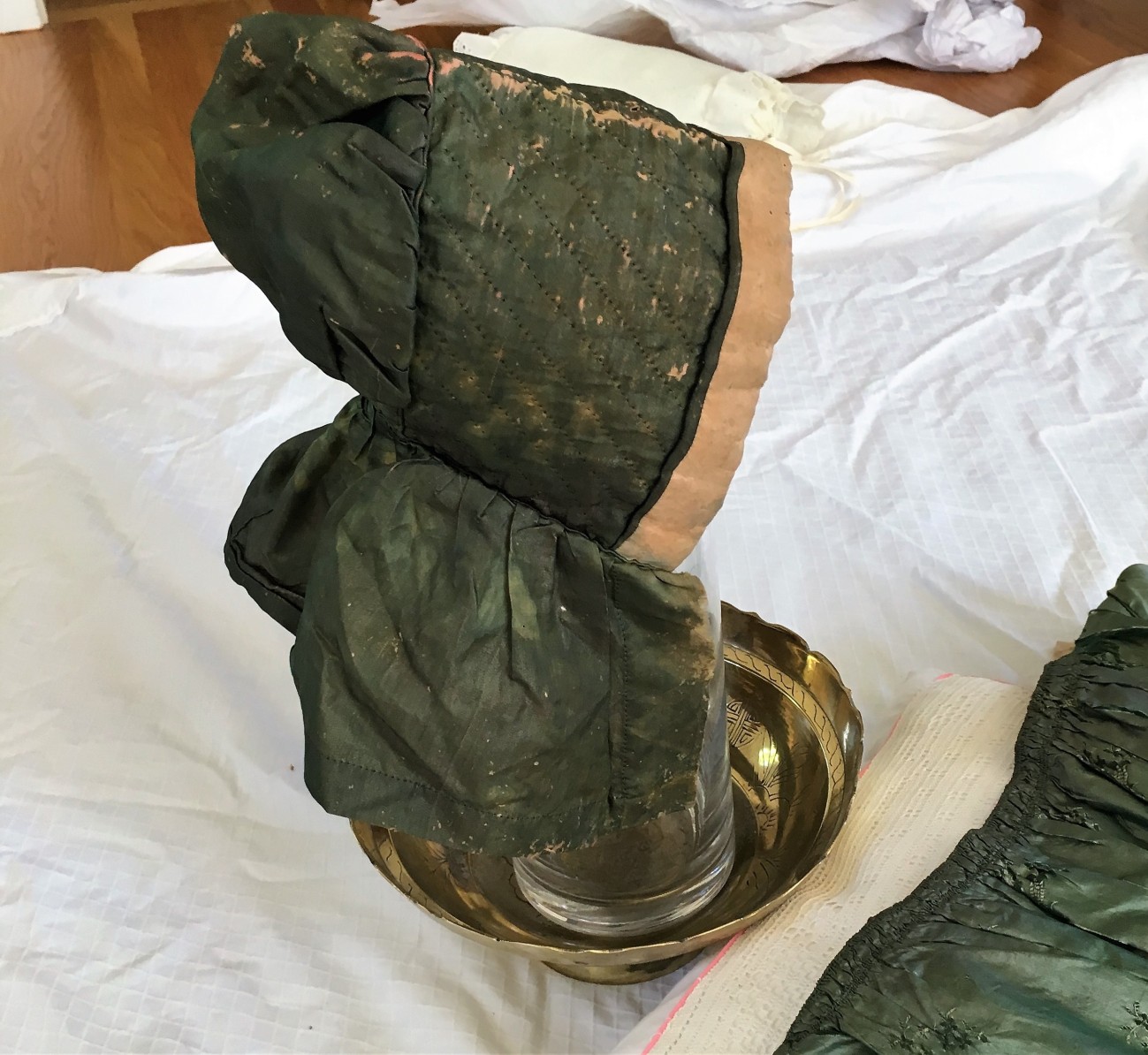 The bonnet made to go with the dress has not aged as well but is a wonderful example of the headgear worn in those early times.

It is lined with the same material as the dress.  It is probable ribbons were attached to the bonnet – these could easily be changed to be refreshed for a different look. 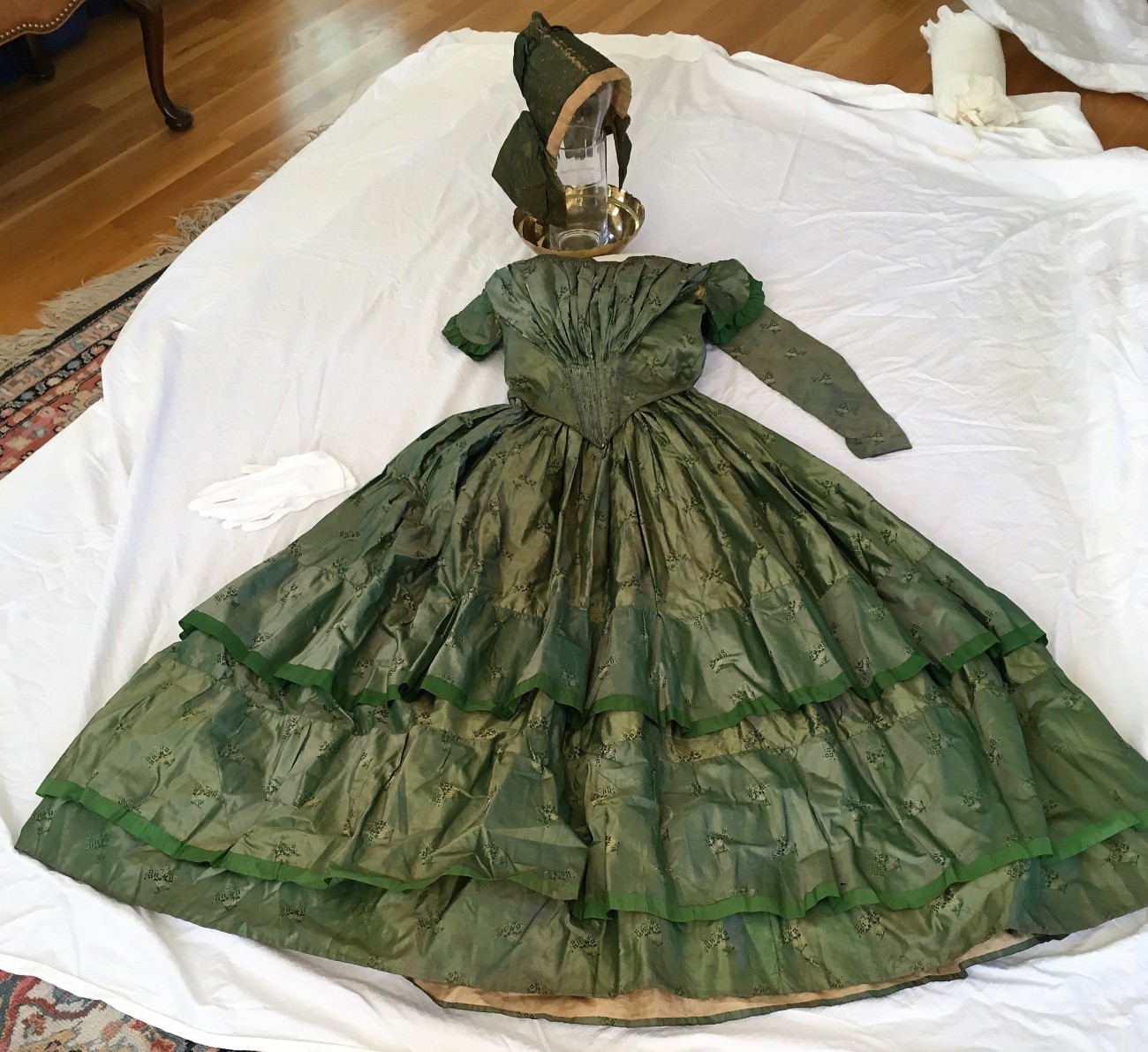 Ann died shortly after the birth of their son.  Her life seems very short.  But think of the rich history left by this woman.  A dress handed down through the generations, descendants that still live today and have passed on her genes to other generations.  She hasn’t left us – she is still here.