By Kentucky Kindred Genealogical Research on October 31, 2015 • ( Leave a comment ) 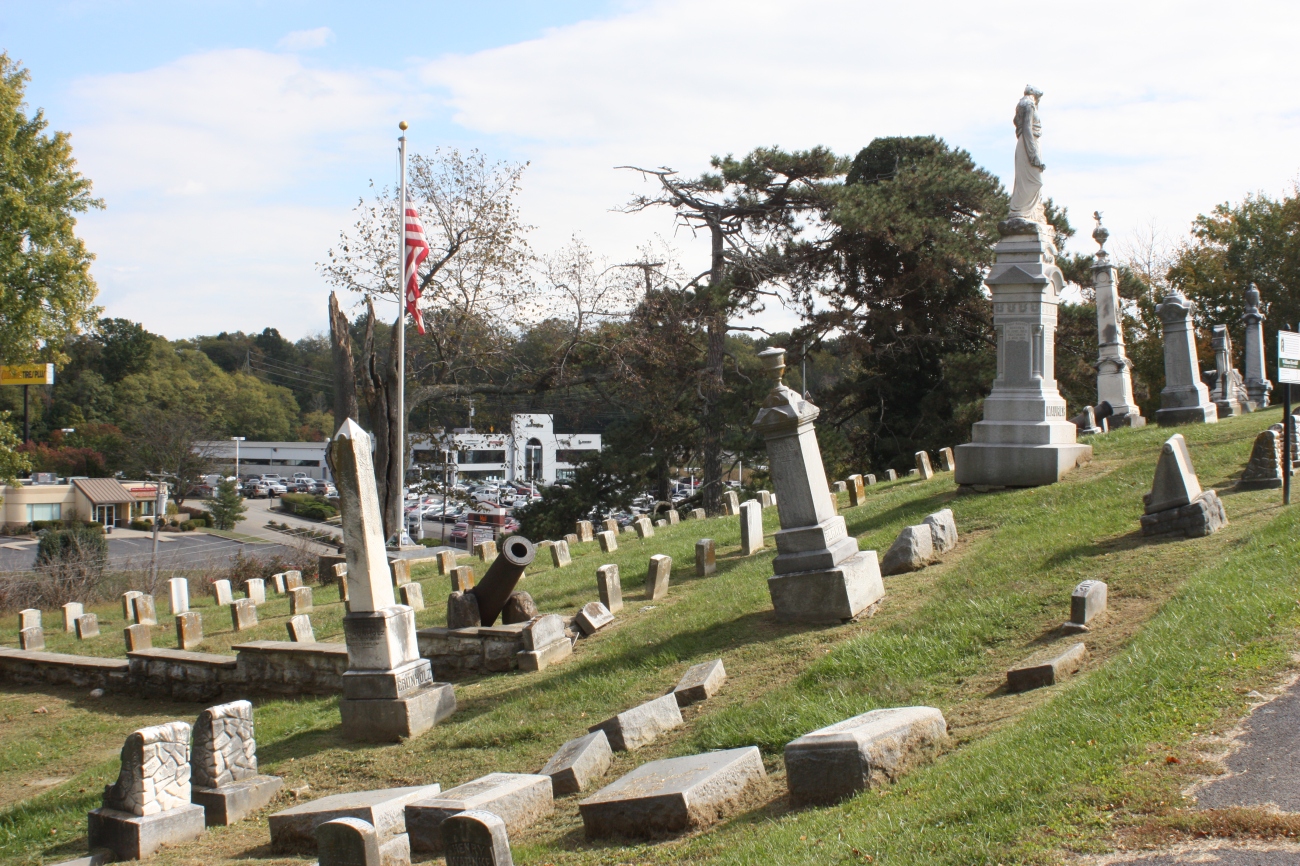 On our weekend adventure earlier in the month we visited the beautiful Evergreen Cemetery in Campbell County, Kentucky.  As with most cemeteries in the northern Kentucky area, it is hilly!  This portion of the cemetery is dedicated to Civil War soldiers, hence the cannons at the four corners, and similar gravestones.

We were interested to learn that one soldier buried here was quite remarkable in his service.

William Horsfall was a young 15 year old, who left his family, unbeknown them, to be a drummer in the Civil War.  He managed to make it through the war, possibly because of his youth, and tell his story.  When he was just 15 he received the Medal of Honor for saving the life of Captain Williamson during the siege of Corinth.  He was one of the youngest Kentuckians to receive this honor.

With a last name of Horsfall you would think there would not be a problem finding information!  I found at least three William Horsfall’s, all born in 1847!  This is why this post is late!  But I believe I have found THE William H. Horsfall.  His death certificate lists him as the son of John Horsfall, born in England, and Elizabeth McDowel, born in Indiana.  He is listed as married and a carpenter.  The death certificate is signed by informant Lucretia Horsfall.  I presume this is his wife, but am not sure.  Hopefully one of you will know more about this family.

“I LEFT home without money or a warning to my parents,” writes William Horsfall “and in company with three other boys, stealthily boarded the steamer ‘Annie Laurie,’ moored at the Cincinnati wharf at Newport and billed for the Kanawha River that evening, about the 20th of December, 1861. When the bell rang for the departure of the boat, my boy companions, having a change of heart, ran ashore before the plank was hauled aboard, and wanted me to do the same. I kept in hiding until the boat was well under way and then made bold enough to venture on deck. I was accosted by the captain of the boat as to my destination, etc., and telling him the old orphan-boy story, I was treated very kindly, given something to eat, and allowed very liberal privileges.
“I arrived at Cincinnati without further incident, and enlisted as a drummer boy.
“In the fighting before Corinth, Miss., May 21, 1862-Nelson’s Brigade engaged -my position was to the right of the First Kentucky, as an independent sharpshooter. The regiment had just made a desperate charge across the ravine. Captain Williamson was wounded in the charge, and, in subsequent reversing of positions, was left between the lines. Lieutenant Hocke, approaching me, said: ‘Horsfall, Captain Williamson is in a serious predicament; rescue him if possible.’ So I placed my gun against a tree, and, in a stooping run, gained his side and dragged him to the stretcher bearers, who took him to the rear.”
Drummer Horsfall was on all the subsequent marches of his regiment. During the famous charge at Stone River he presently found himself hemmed in by rebel horsemen and hostile infantry. Even the rebels took pity on his youth and one of them shouted: “Don’t shoot the damned little Yank! I want him for a cage.” The plucky little drummer made a run for his life and safely got back to his regiment.
[During the Siege of Corinth a Union force 30,000 strong, under General Pope, occupied Hamburg Landing five miles above Pittsburgh, where General Halleck was in full command. The movement against Corinth was made on the 30th of April. There was little or no active engagement. Beauregard evacuated the town on the 26th of May and the Union Army took possession on the 30th.]
Source: Deeds of Valor