By Kentucky Kindred Genealogical Research on October 4, 2019 • ( Leave a comment )

Dr. Henry Berry Blackburn is a mystery man.  We have information on his birth and death – but little on the years between.  Henry was the son of Edward Mitchell Blackburn and Lavinia Bell.  Henry’s grandfather was George Blackburn, a Woodford County pioneer.

The home of George Blackburn was located a mile below Spring Station on the Louisville and Nashville Railroad.  He located there about 1792 and erected his home soon thereafter.  He also built a stockade around the spring that was in the yard, and in easy reach in case of emergency.  This stockade was built not only for the safety of the family, but for the better protection of the community as well.  Whenever an uprising of Indians was imminent, or even suspected, all persons living in the vicinity took refuge in “Blackburn’s Fort”.

He lived there for many years and reared a large family of children.  The farm is now owned by James Withrow.

His son, “Ned” Blackburn, was a great lover of the horse and bred many racers on his farm which cornered at Spring Station, just one mile distant from his father’s home.  Here was born quite a family of children, several of whom distinguished themselves in the political arena.  Dr. Luke P. Blackburn was in the legislature in 1843, Governor of the state 1879-83, member of the committee of doctors who successfully combatted, and finally stamped out yellow fever in the south, that dreaded disease that had so scourged that section for years.  Jo. C. S. Blackburn was another son who represented Woodford in the Legislature during the sessions of 1871-2, and 1873-4; was in Congress 1875-1885; in U. S. Senate 1885-95, and again in 1901-7; Governor of Panama 1907, and chairman of Lincoln Memorial Commission at Washington 1914-18.  James Blackburn was still another son who was in the State Senate 1875-79; Secretary of State 1879-83, and member of the Constitutional Convention in 1890.

The “Ned” Blackburn farm has been the property of the Blackburn’s for more than one hundred years, the present owner being Dr. Alford Blackburn who saw service in the World War.  Captain Joe and Captain James Blackburn both served the Confederacy 1861-65.

The Blackburn’s and Buford’s, during the early days, were gentlemen sportsmen and often indulged in racing on their local tracks that gave entertainment and delight to their neighbors and friends in Woodford and adjacent counties.

This excerpt gives family background, but doesn’t mention Dr. Henry Blackburn.  In the biographical sketches of Perrin, Battle and Kniffin, there is mention of the youngest son, Joseph Blackburn, that he went south when the Civil War began, eventually was entrusted with a command in Mississippi.  But the important sentence, ‘For two years after he resided in Arkansas as lawyer and planter, but in 1868 returned to Kentucky.’

Henry Blackburn, aged 25, a physician, $26,600, born in Kentucky, is living in Carroll County, Louisiana, in 1850.  His wife, Elizabeth Lester Bailes, 1818-1852, 30, was born in Georgia, as well as her two children by her first husband, a Mr. Bosworth, Anna, 5, and Helen, 3.  Henry’s older brother, Luke Pryor Blackburn, also a physician, and later governor of Kentucky, moved to Mississippi in 1848, and became an expert on yellow fever.  Perhaps brother Henry moved south to be near his brother.

Although living in Louisiana in 1850, by 1870 he and his second wife, Mary Bryan, lived in Mississippi Township, Desha County, Arkansas, with four children.  The census record gives Kentucky as birthplace for the parents and the first three children (Henry, 14; Bryan, 10; and Haggin, 5), only baby Ernest, 10/12, was born in Arkansas.  If this is correct Henry moved back to Kentucky when his first wife died in 1852.  Mary Bryan, his second wife, is a member of the Bryan family buried in the Lexington Cemetery (as are Henry and Mary).  Her parents are Joseph Bryan and Mary Cartmell.  I could not find the family in census records for 1860 or 1880. 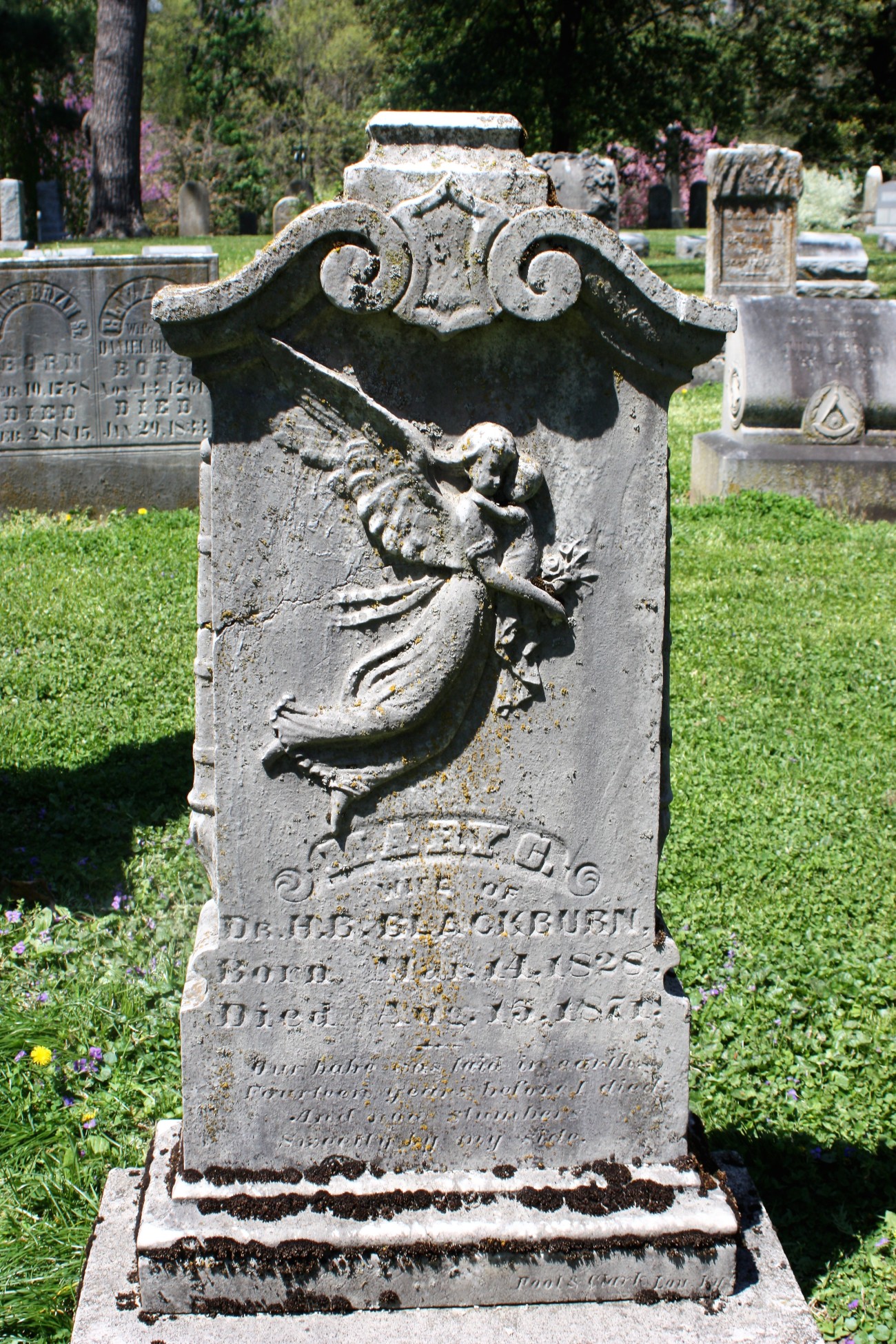 Mary Bryan Blackburn died one year after the 1870 census, August 15, 1871.  Her beautiful gravestone depicts an angel carrying a little babe.  The inscription reads, ‘Our babe was laid in earth fourteen years before I died; and now slumbers sweetly by my side.’  This must have been a child born between brothers Henry and Bryan.  Mary is buried close to her family.  The couple must have been in Kentucky when this baby died in 1857, and was buried in the Lexington Cemetery with the Bryan family.  I do not know if Mary died in Arkansas or Kentucky, but if Arkansas, her body was brought to lie with her baby and the rest of her family. 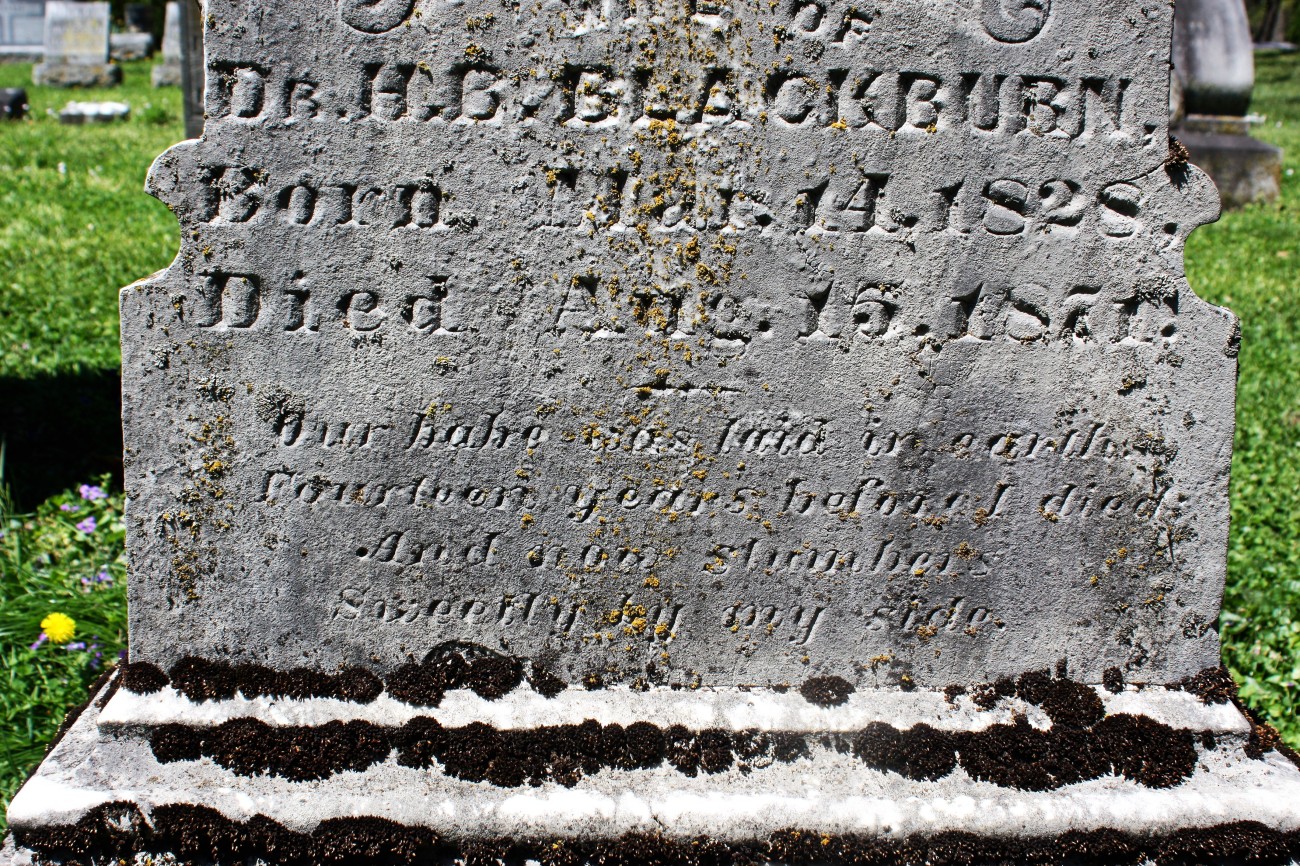 Our babe was laid in earth fourteen years before I died; and now slumbers sweetly by my side. 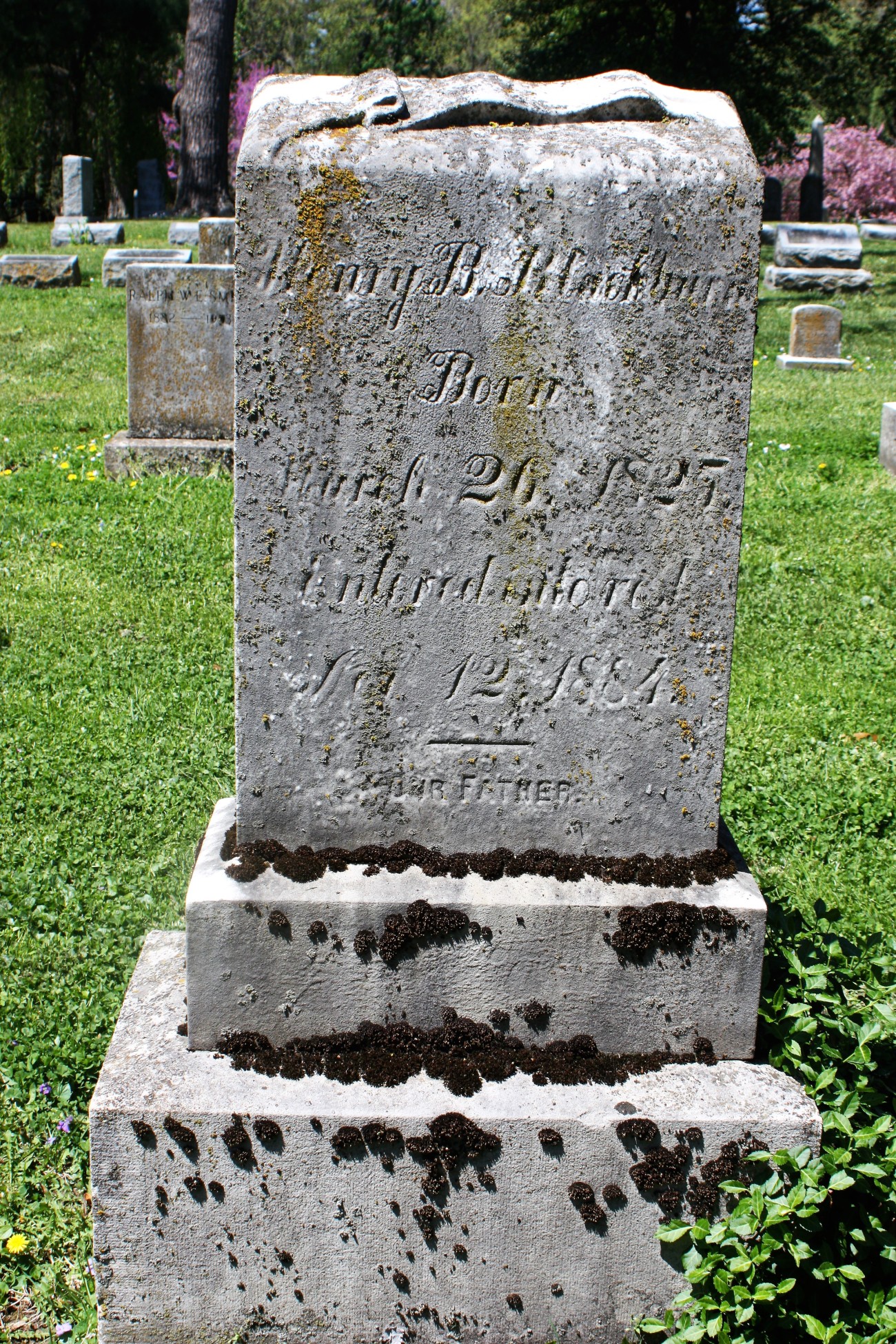 From the several newspaper notices of November 1884, for Dr. Henry Berry Blackburn’s death, we find a few more clues to this family.  He died in Desha County, Arkansas, November 25, 1884.  The Arkansas Democrat lists him as a well-known and highly respected citizen, and speaks of a widow.  Henry evidently married a third time, after Mary’s death.  It also said his remains were taken to Lexington, Kentucky, for burial.  The Greenville, Mississippi, Weekly Democrat Times lists him as the brother of Governor Luke and Senator J. S. C. Blackburn, of Kentucky.  ‘The deceased was a large planter and an excellent and most popular citizen of Laconia Circle, Arkansas.  He had many relatives, the Hunts and Johnsons, in this county, where he frequently visited.’  The Kentucky Advocate of Boyle County, Kentucky, said he ‘died Thursday night at his plantation in Arkansas, of an attack of pneumonia.’  Yet the Courier Journal, of Louisville, Kentucky, said he died at his plantation in Mississippi.  I believe living in Mississippi Township of Arkansas caused confusion in his obituaries.

Henry seems to have lived in the shadow of his brothers, but I’m sure he worked with Dr. Luke to combat yellow fever, cholera and other diseases prevalent at the time period, as did many of our early physicians.