Who knew Harrodsburg had the reputation of one of the best mineral springs anywhere around?  Graham Springs and its hotel saw many of important and famous people visit both before the Civil War and after the turn of the 20th century.  It is said its guest registers hold the names of everyone who visited; and one was used in a murder trial in the 1850’s to locate the whereabouts of certain witnesses at the time of the murder.  You guessed it – they were at the Graham Springs Hotel.

Begun in 1820, a large hotel was built in 1843.  In 1853 the property was sold to the US government, and burned in 1865.  In 1911 the idea of the Graham Springs Hotel was reborn with another building, and continued through 1932 when the property was purchased by Glave Goddard.  In 1946 it was decided to build the James B. Haggin Hospital on the site of the Grahm Springs Hotel. 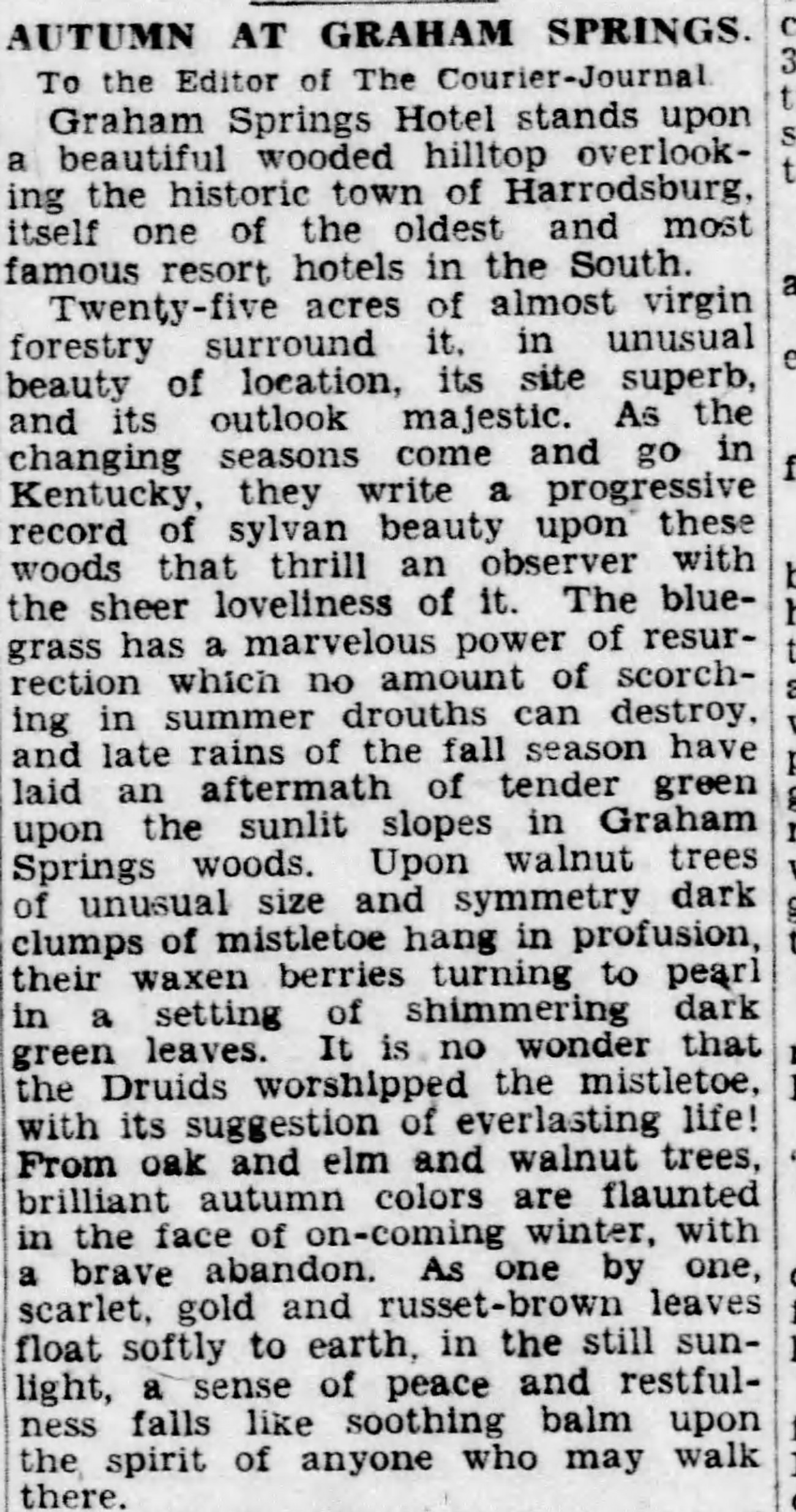 To the Editor of The Courier-Journal

Graham Springs Hotel stands upon a beautiful wooded hilltop overlooking the historic town of Harrodsburg, itself one of the oldest and most famous resort hotels in the South.

Twenty-five acres of almost virgin forestry surround it, in unusual beauty of location, its site superb, and its outlook majestic.  As the changing seasons come and go in Kentucky, they write a progressive record of the sylvan beauty upon these woods that thrill an observer with the sheer loveliness of it.  The bluegrass has a marvelous power of resurrection which no amount of scorching in summer drouths can destroy, and late rains of the fall season have laid an aftermath of tender green upon the sunlit slopes in Graham Springs woods.  Upon walnut trees of unusual size and symmetry dark clumps of mistletoe hang in profusion, their waxen berries turning to pearl in a setting of shimmering dark green leaves.  It is no wonder that the Druids worshipped the mistletoe, with its suggestion of everlasting life!  From oak and elm and walnut trees, brilliant autumn colors are flaunted in the face of on-coming winter, with a brave abandon.  As one by one, scarlet, gold and russet-brown leaves float softly to earth, in the still sunlight, a sense of peace and restfulness falls like soothing balm upon the spirit of anyone who may walk there.

In 1820, Dr. C. C. Graham erected a classic building resembling an old world castle upon these grounds, close to the famous Graham0 Springs, whose marvelous curative waters still attract people in search of health and pleasure.  It does not need a page from the United States Dispensary, which states that, ‘Graham Springs and Saratoga are the only saline waters of true worth to be found in America,’ to convince one who has tasted it.  Many have declared it equal to the waters at Baden-Baden.  Kentucky has an asset in this mineral water which she cannot afford to overlook, and progress will surely present it to the world in the fullest measure.  In 1865, that year of the War Between the States anguish, the old hotel was burned.  Its romantic memories, its charm and prestige, however, which are things of spiritual permanence, still cling about the place.

It was in Harrodsburg that George Rogers Clark planned his famous army for the conquest of the Northwest, in commemoration of which event, Old Fort Harrod has been made a State park.  It was within the hotel grounds that a beautiful pageant, representing the early history of Kentucky, was given in celebration of the centennial anniversary of the founding of Harrodsburg, several years ago.  A priceless old record book of Graham Springs Hotel shows names of men famous in the making of America.  Henry Clay was a frequent guest and left his name upon its register.  Pages might be printed of other famous signatures found there.

Old Dr. Graham himself, with his snow-white beard and princely bearing, was a conspicuous figure in the annals of Kentucky, not only leaving a record of his fame at Graham Springs, but at old Transylvania University at Lexington, where he received his education.  Dr. Ephraim McDowell at Danville, and Dr. C. C. Graham at Harrodsburg were men who measured up to the highest standards in the world’s medical records.  The wise old doctor saw to it that his guests had a full measure of exercise and pleasure as well as curative waters to tone up the human system.  A series of dances were inaugurated at Graham Springs before the War Between the States, which became famous for their brilliancy and aristocratic patronage.  The musicians were colored slaves of Dr. Graham, highly trained and gaily liveried.  The singing of ‘spirituals’ before an audience began, in the old South, upon these occasions. 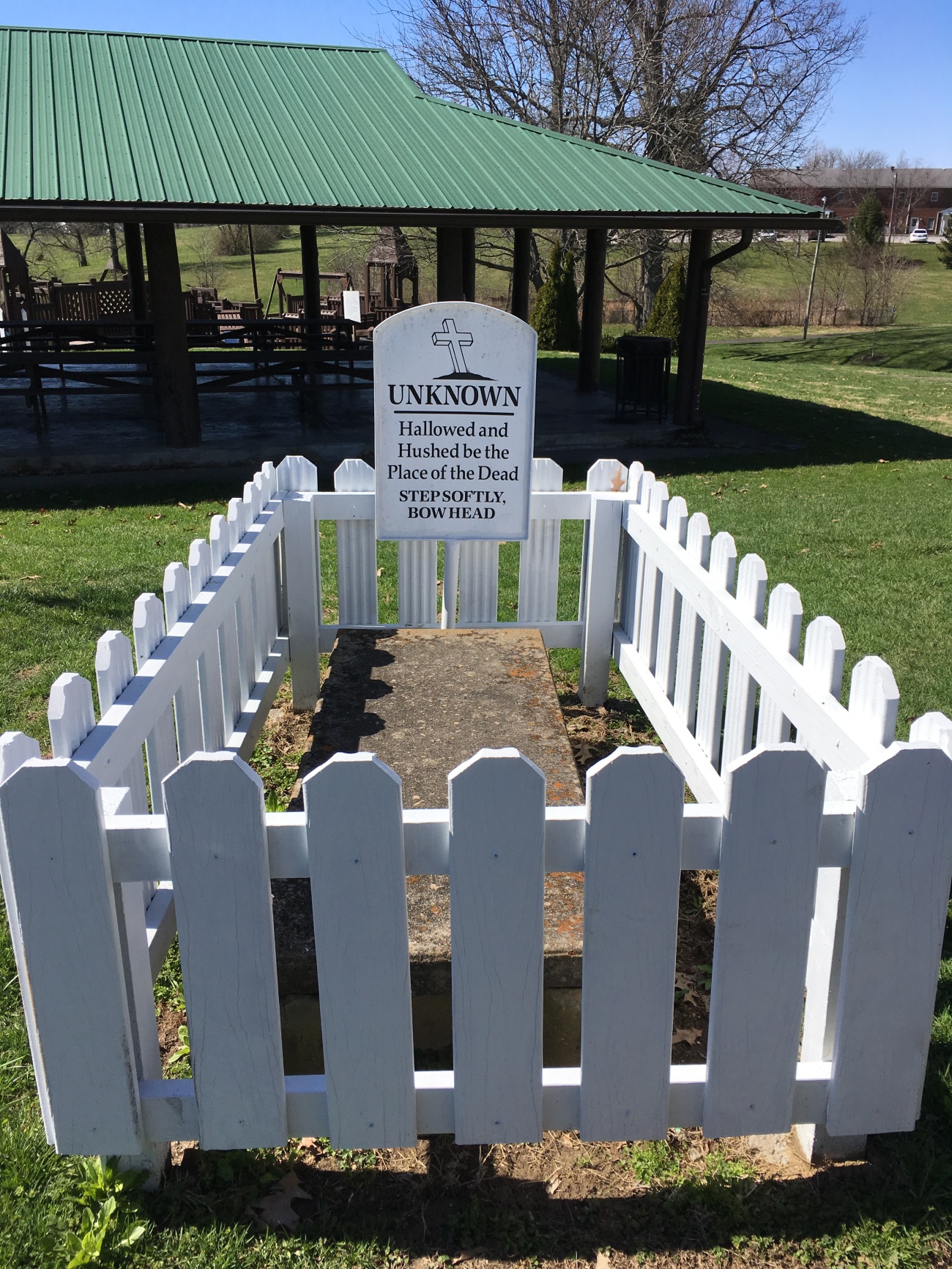 The grave of the unknown girl who died of a heart attack at one of the balls given at Graham Springs.  Her grave is well-tended today.

To this day the weekly dances at Graham Springs are social events of importance in Kentucky, during the season.  Perhaps a mention of the ante-bellum balls may not be complete without reference to the beautiful ‘Unknown’ who danced so gaily and so long at one of them, that she died of a heart attack on the same summer night.  Her grave, marked first by Dr. Graham, and afterward by the City of Harrodsburg, is shown to tourists who never fail to respond to the pathetic appeal of her story.

Mrs. James Harrod, widow of the hardy old pioneer who founded Harrodsburg, lived to a very old age, and was an honored guest at Graham Springs on the first anniversary celebration held there. 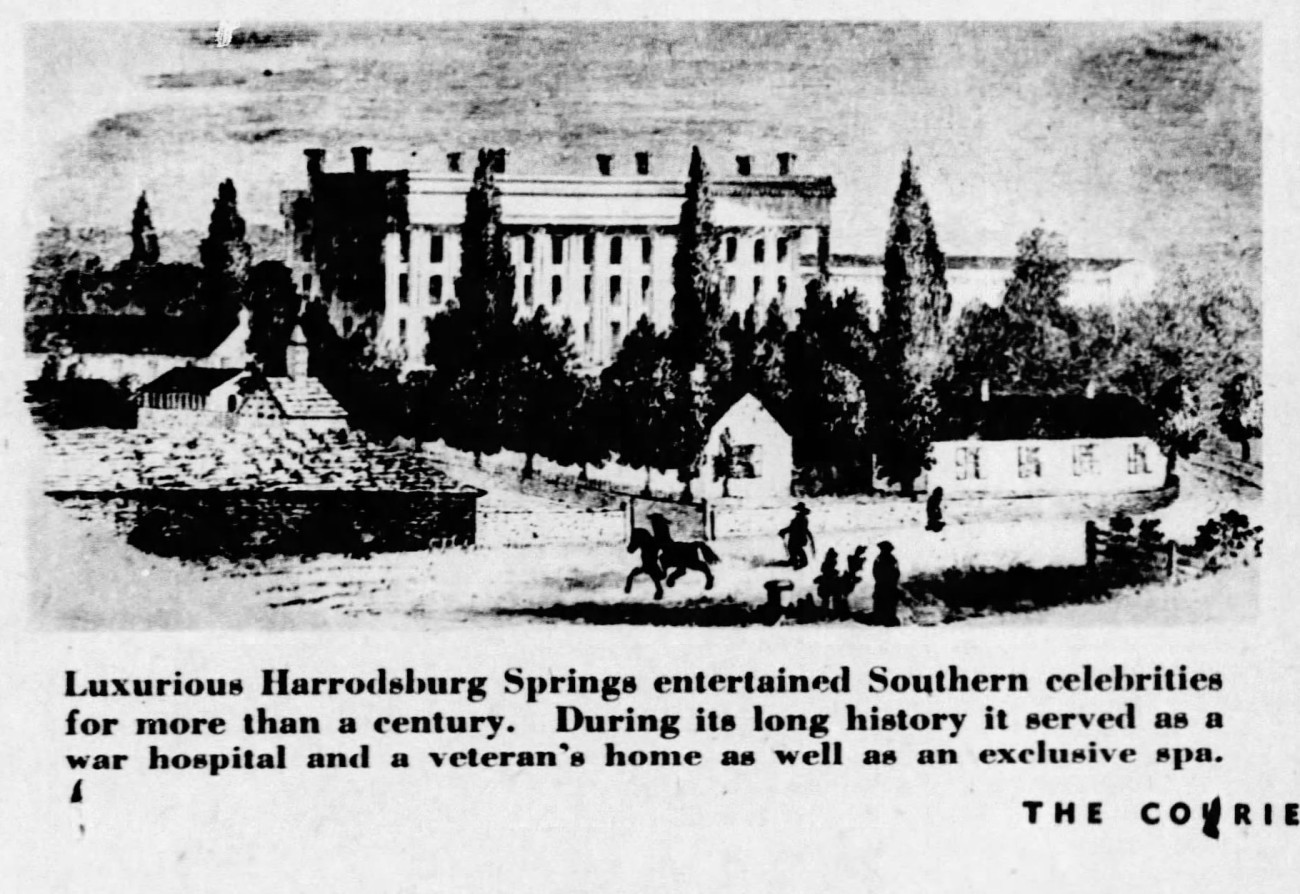 Where Southern Gentry Met to Freshen, Fatten and Flirt

This article of 1942 talks about the many ‘watering places’ or mineral springs located in Kentucky, and used before the advent of the Civil War.  It is said physicians strongly recommended taking the waters and were advertised as being ‘especially beneficial to persons suffering from diseases of the stomach, live and kidneys, as well as from asthma, gout, dyspepsia, rheumatism, bilious disorders, neuralgia, autumnal fevers and general debility.’  I believe that takes in almost anyone!

In 1803 John Kennedy’s stagecoach lines helped bring patrons from the city to the country where they might take the waters.

At Olympian Springs, in Bath County it was said ‘there was much flirting, sometimes by ‘married charmers, thirsting for universal dominion.’  Disputes between the ladies often involved ‘pillows, bolsters, fingernails and the poignant sarcasm of the tongue,’ and, at time, the dueling pistols of sensitive gentlemen could be heard in a nearby woodland settling ‘affairs of honor.’

‘Dr. Christopher Columbus Graham, veteran of the War of 1812 and “for many years the champion off-hand rifle shot of the world,” purchased the Greenville Springs in 1827, and the following year bought the “Harrodsburg or Sutton Springs” from his father-in-law, Captain David Sutton, for $10,000.  Dr. Graham then combined these two watering places under the name of Harrodsburg or Graham’s Springs.

‘A guest, viewing the Springs in retrospect, said of them: “The walk to the spring before breakfast was very fashionable, a long board-walk covered with tan-bark and shaded with locust trees, their branches meeting and arching overhead the whole distance.  The belles and beaux walked up and down the long portico of the hotel in what seemed to me a fair procession.  The ladies with their beautiful elaborately dressed hair in the New Orleans fashion, as from there we got the styles, and their organdy muslins, which were not then to be bought outside of New Orleans.  The envy of all were the exquisite wide embroidered collars and cuffs worn by the Southern belles.  A score of Creole beauties, prim and particular in their lovely, fleecy, muslin dresses were always present.  The ballroom at night was a scene of enchantment; old Dr. Graham, the proprietor, was the master of ceremonies and the life of the party.”’

It was said that during the summer months of 1833, when the Asiatic cholera was rampant in Kentucky, many came to the springs for healing.  ‘Dr. Graham, at Harrodsburg, announced: “These Springs are perfectly free from the cholera and they never have been otherwise,” and “the many who visited the Springs, from the various cholera districts, with the disease upon them, have all quickly recovered.”’

‘By the middle ‘40’s the watering places of the state were in their heyday.  To keep abreast of the times, Dr. Christopher Graham of Harrodsburg Springs erected an elegant and commodious hotel during the late fall of 1842 and winter of 1843.  This splendid building, costing $30,000, was acclaimed by many to the “the finest edifice in the West.”’ 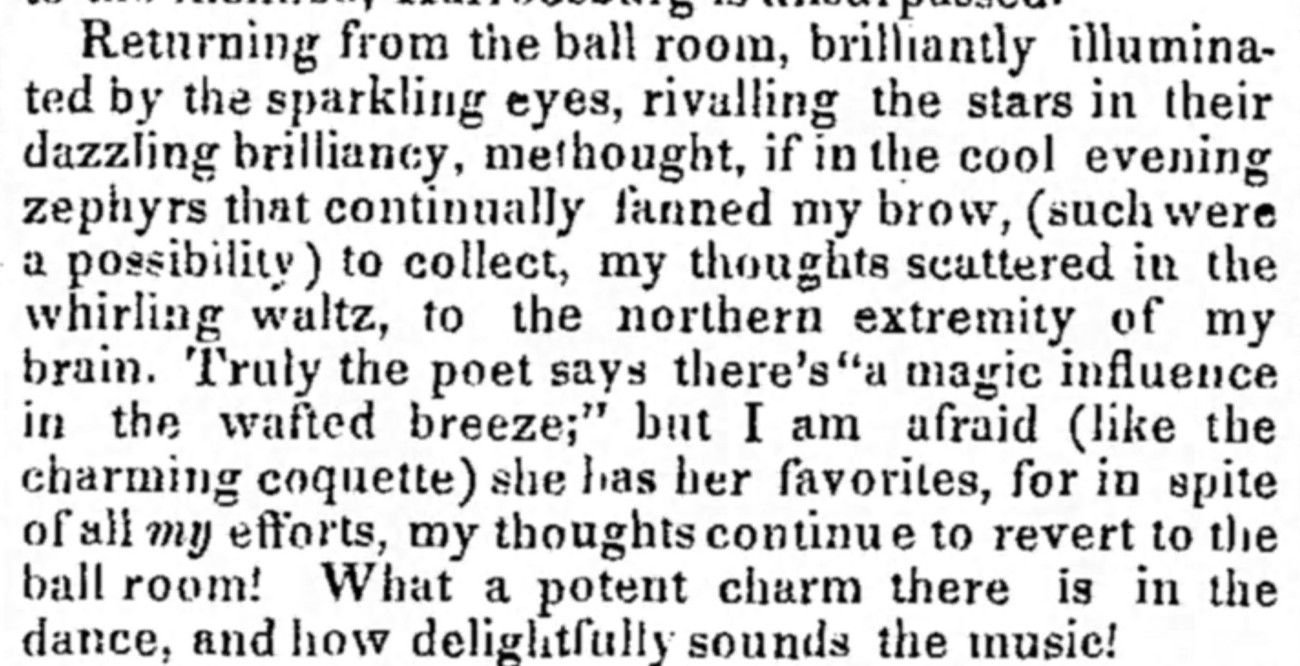 And this July 19, 1851, note in The Courier-Journal gives a rousing description of the dance in the Graham Springs Hotel ball room.  ‘Returning from the ball room, brilliantly illuminated by the sparkling eyes, rivaling the stars in their dazzling brilliancy, methought, if in the cool evening zephyrs that continually fanned my brown, (such were a possibility) to collect, my thoughts scattered in the whirling waltz, to the northern extremity of my brain.  Truly the poet says there’s a “magical influence in the wafted breeze;” but I am afraid (like the charming coquette) she has her favorites, for in spite of all my efforts, my thoughts continue to revert to the ball room!  What a potent charm there is in the dance, and how delightfully sounds the music!’

This popularity of ‘taking the waters’ continued into the early 1850’s.  in 1853 Dr. Graham sold the Springs to the United States Government and it was turned into a military asylum for old and disabled soldiers.

In 1856 the main building burned.  And during the Civil War the buildings that remained were used as a hospital.  After the Battle of Perryville on October 8, 1862, in Boyle County, the ballroom was used as an operating room.

But the Springs did revive in the early days of the 20th century. 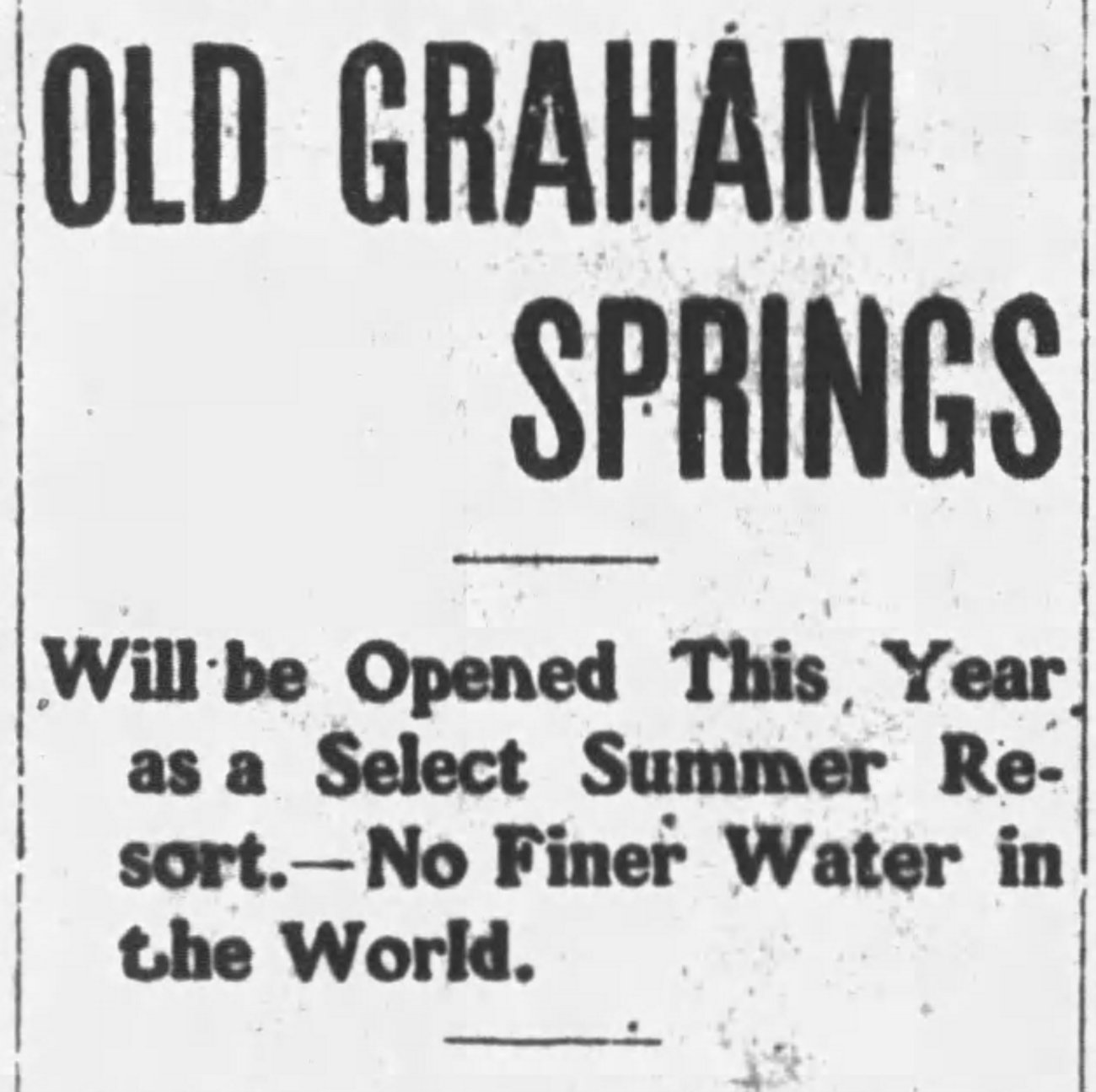 It will be pleasant news to the people of Central Kentucky to learn that the far-famed historical old Graham Springs will be opened as a select summer resort the coming season.  The Cassell mansion, one of the most elegant brick buildings in the Blue Grass has been converted into a choice hotel.  Old fashioned cooking will be provided and food in abundance will be supplied.  The water that pours from Old Graham Springs is the finest in the world and it is a wonder that somebody has not long ago erected a hotel there sufficient to accommodate five hundred guests.  The property is now owned by Mr. Ben C. Allin and Editor T. Sanders Orr has charge of the publicity department.  The water from these springs should be bottled and shipped throughout the country.  Reasonable rates will be made.  Many Danville people will doubtless take advantage of the fine accommodations and benefit themselves by drinking the pure water that made Harrodsburg famous sixty years ago. 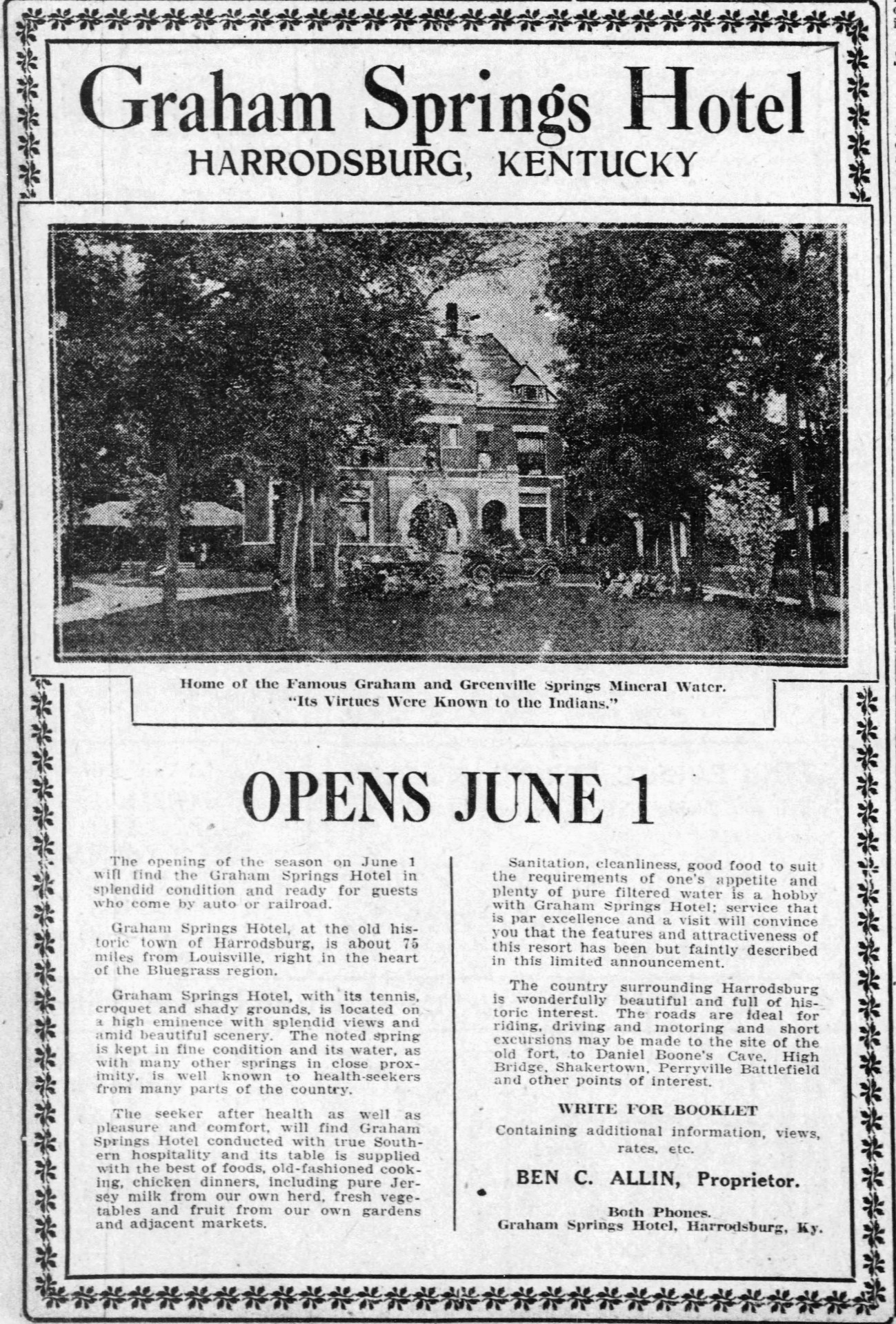 This 1923 advertisement for the Graham Springs Hotel touts its ‘tennis, croquet and shady grounds, is located on a high eminence with splendid views and amid beautiful scenery.’  Perhaps this was the first of what today is known as farm-to-table – ‘its table is supplied with the best of foods, old-fashioned cooking, chicken dinners, including pure Jersey milk from our own herd, fresh vegetables and fruit from our own gardens.’

It is also a tourist manual, giving ideas for outings in the surrounding country – ‘beautiful and full of historic interest.  The roads are ideal for riding, driving and motoring and short excursions may be made to the site of the old fort, to Daniel Boone’s Cave, High Bridge, Shakertown, Perryville Battlefield and other points of interest.’ 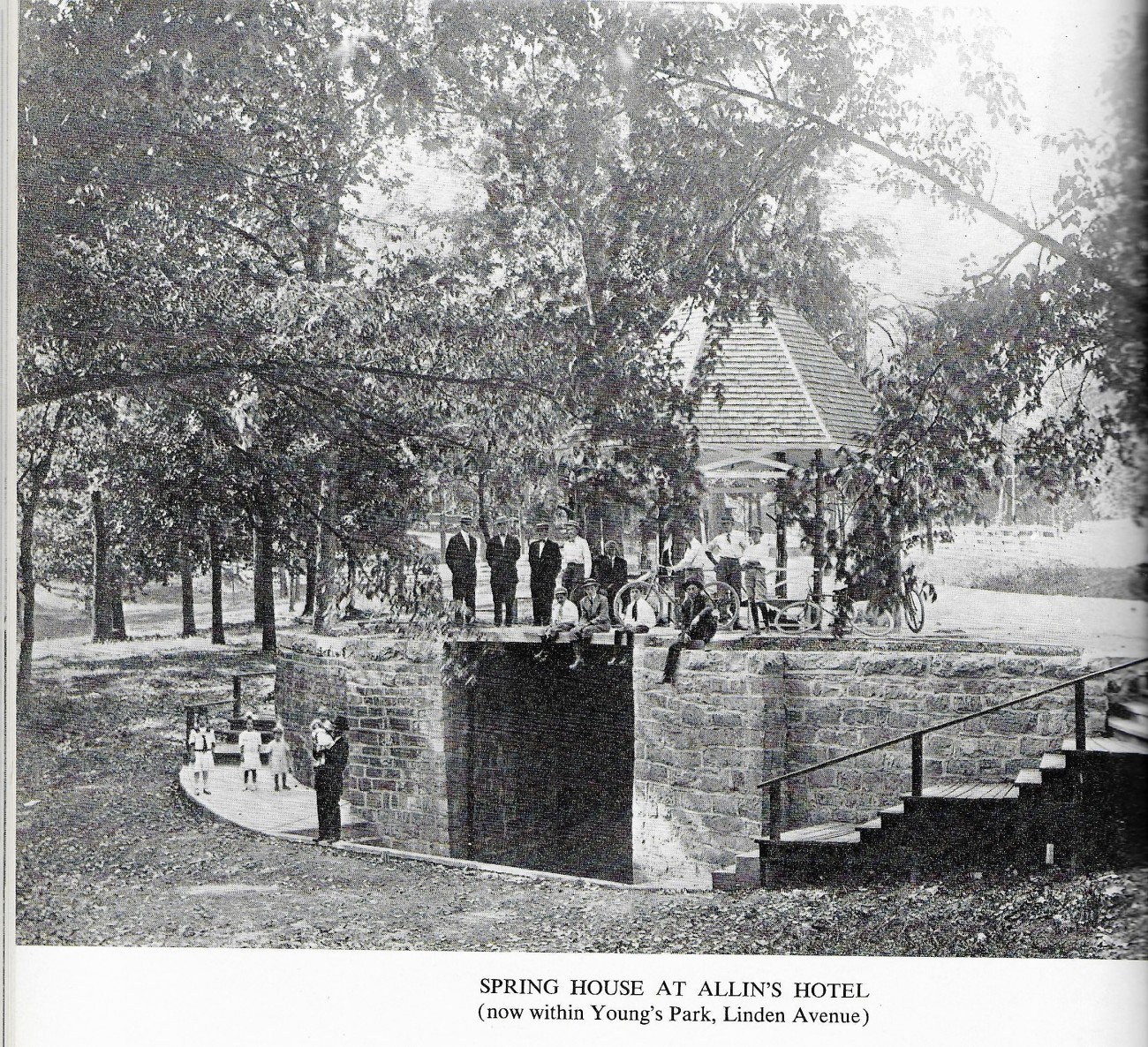 This photo was taken during those early days of the 20th century. 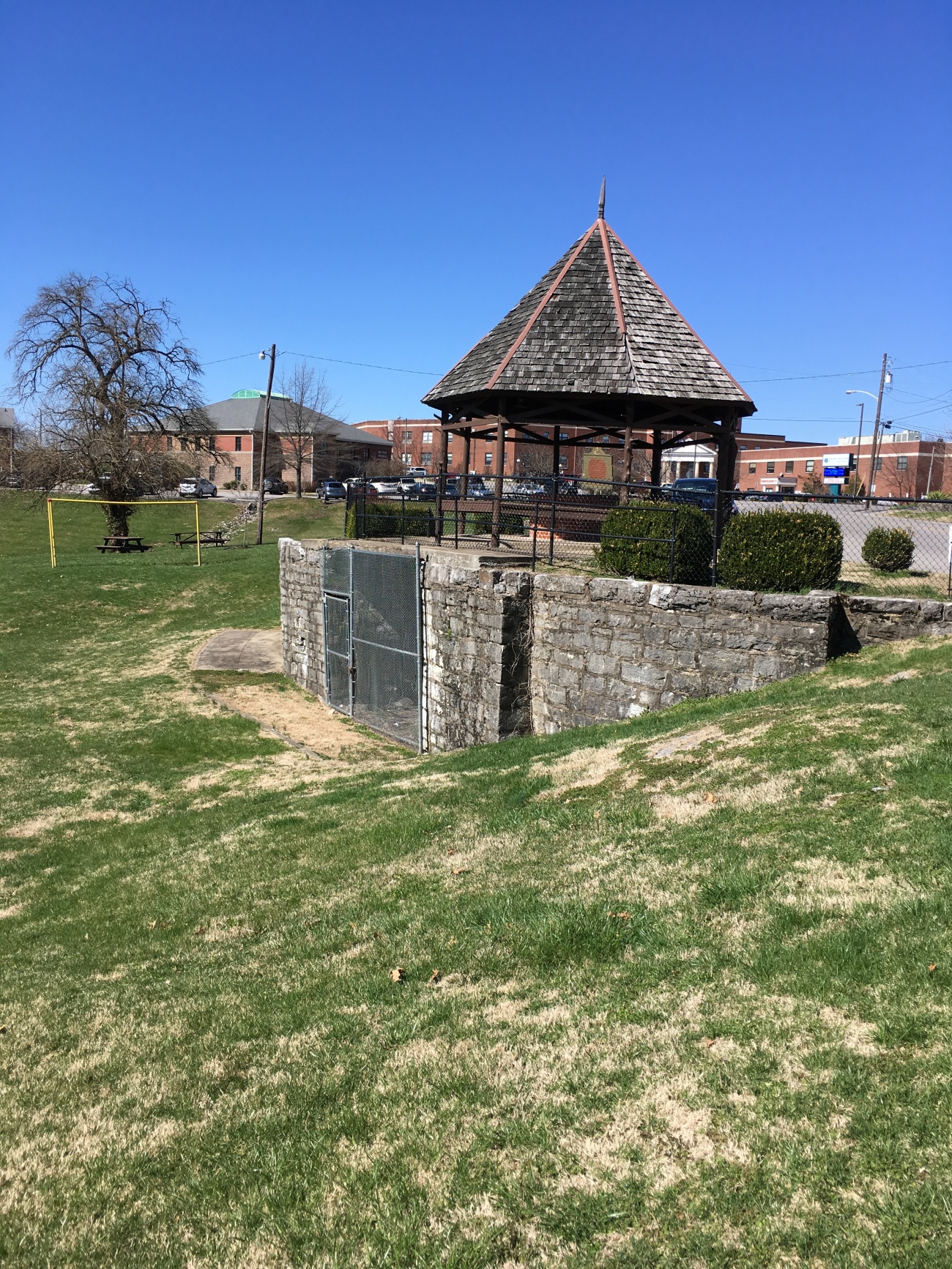 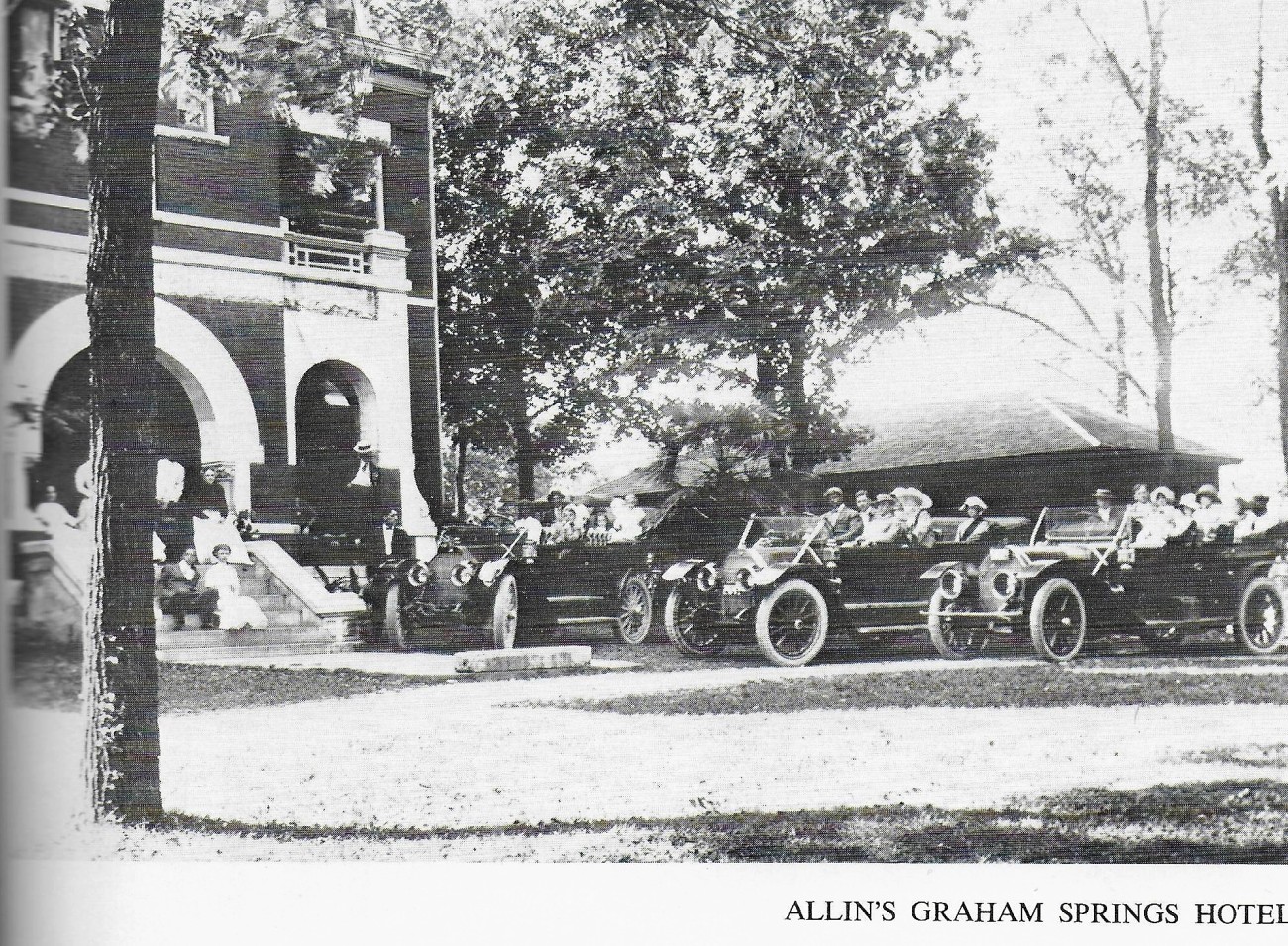