By Kentucky Kindred Genealogical Research on October 27, 2019 • ( Leave a comment )

In memory of Susan B. Merwin, November 21, 1874 – May 6, 1923.  Superintendent Kentucky School for the Blind.  With great love and untiring zeal she labored to educate the blind.  Cave Hill Cemetery, Louisville, Jefferson County, Kentucky.

Susan Buckingham Merwin was the daughter of Samuel M. and Mary Irvine Merwin, born November 21, 1874.  Susan never married, but throughout her life gave her time and talent to helping the blind.  In 1913 she became superintendent of the Kentucky School for the Blind, and continued in that capacity until her death from pneumonia and influenza, May 6, 1923.  From the following two articles in the Louisville newspaper one can see the deep devotion Miss Merwin had for the blind, and the devotion others had for her unending care for them.  It is good to see an independent woman make her way in what shortly before the 1920’s must have been a man’s world. 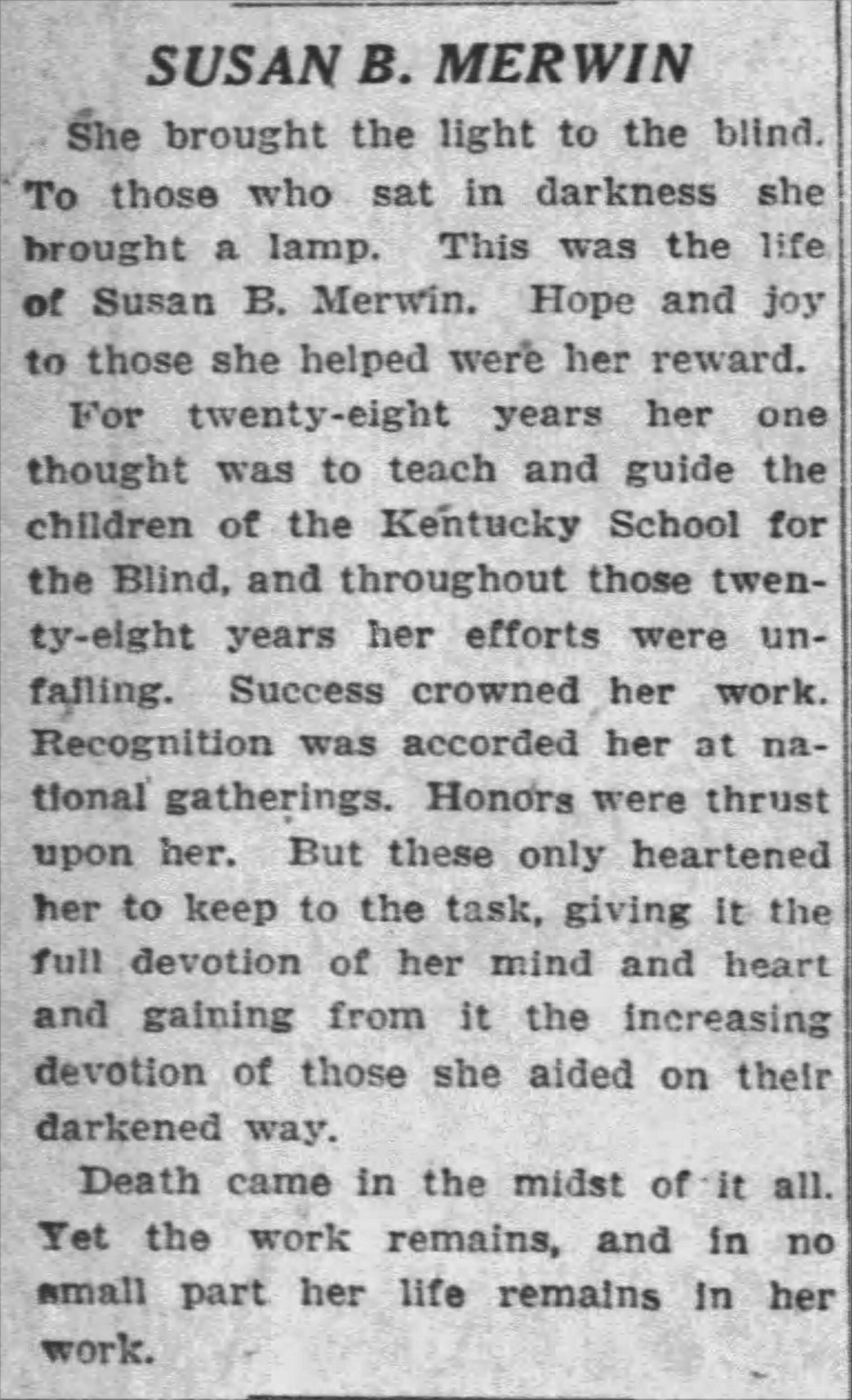 She brought the light to the blind.  To those who sat in darkness she brought a lamp.  This was the life of Susan B. Merwin.  Hope and joy to those she helped were her reward.

For twenty-eight years her one thought was to teach and guide the children of the Kentucky School for the Blind, and throughout those twenty-eight years her efforts were unfailing.  Success crowned her work.  Recognition was accorded her at national gatherings.  Honors were thrust upon her.  But these only heartened her to keep to the task, giving it the full devotion of her mind and heart and gaining from it the increasing devotion of those she aided on their darkened way.

Death came in the midst of it all.  Yet the work remains, and in no small part her life remains in her work.

The Trustees of the American Printing House for the Blind do hereby adopt and place upon the records of that institution the following:

Memorial to Susan B. Merwin

Susan B. Merwin died on May 6, 1923, after a brief illness of just one week.  Suddenly withdrawn from a life of the greatest daily activity and highest efficiency, it is difficult for those who have been closely associated with her for several years’ past in her great work for the blind to realize that she is gone.  Though frail of body, she was so brave, so strong in her spirit, so indomitable, that we never thought of her losing, even in a battle with death.  Conscious of course that the end must come someday, we never thought of its near approach.

Miss Merwin was a very unusual woman.  When she was twenty years of age, just out of school, she took up work among the blind, and to that noble cause she gave the remainder of her life – twenty-eight years of splendid service.  At the time of her death she was both superintendent of the Kentucky School for the Blind and also Secretary of the American Printing House for the Blind, in which latter capacity she was the active executive officer of the institution.  She kept in intimate touch with every detail of the work to which her life was devoted, keeping up with the advanced thought of the day in that line.  In her there were united very superior mental endowment, high nervous energy, absolute devotion to a great cause and a splendid optimism.  These qualities made her a woman of vision with a high order of practical executive ability.

She confined herself almost entirely to her work for the blind.  She took but little part in outside work, though she was a member of the Women’s Club of Louisville, and was alive and alert to what was going on.  This, however, does not mean that she confined herself to the walls or the grounds of the two institutions in which she was an officer.  On the contrary she took a keen interest and an active part in meetings, wherever held, of those working for the blind, winning in this way a national reputation.  In the late years she has frequently been called upon to appear, and has appeared with success, before high officials of the state and the nation, whenever the cause of the blind was to be pleaded.

She will be greatly missed by those who knew her best and saw her most in her daily work, and by those who collaborated with her officially, but far more than by any other will she be missed by the blind to whom she sacredly devoted her life.