How many of you noticed there were only half the usual posts in the last week or so?  Ritchey and I were on vacation at Nags Head, North Carolina, at the edge of the Atlantic Ocean.  It was a much-needed respite, an enjoyable time of rest and relaxation, where I enjoyed my time reading the new Eddie Price novel, coloring, the sea air and breezes.  Now we must begin again in earnest to find those missing ancestors! 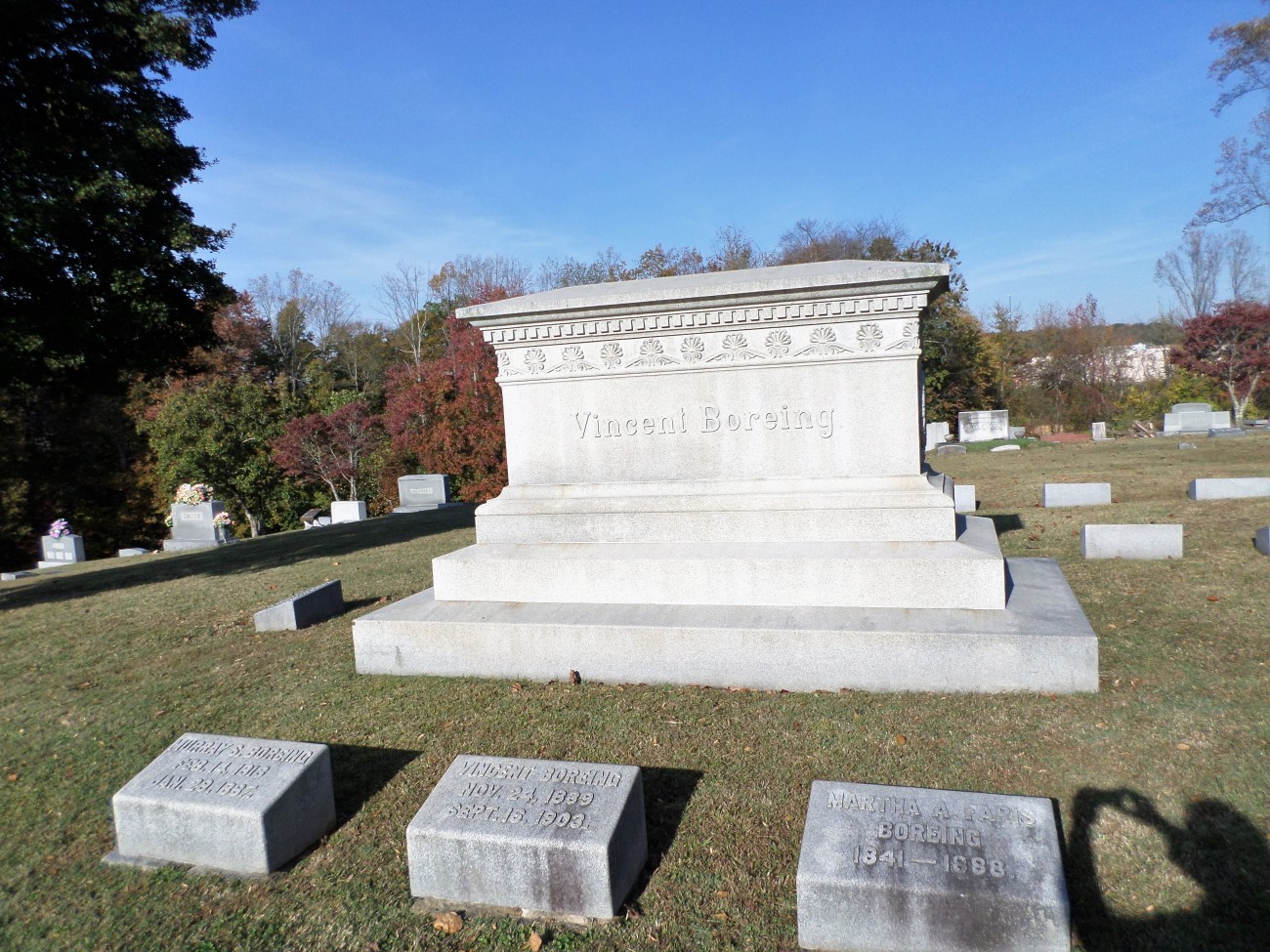 Today we travel to Laurel County, to the London City Cemetery also known as the A. R. Dyche Memorial Park, and stop at the Boreing family plot.  Twelve family members are buried here.

From the following obituary much information is given:

Congressman Vincent Boreing was born March 24, 1839, in Washington County, Tennessee; removed to Kentucky in 1847 with his father, Murray Boreing, and settled in Laurel County; was educated at Laurel Seminary, London, Kentucky, and Tusculum College, Greenville,

Tennessee; volunteered in the Union army, in Co. A, 24th Kentucky Volunteer Infantry, March 1, 1861, as a private; on account of meritorious conduct was commissioned First Lieutenant from the ranks by Gov. Bramlett; was severely wounded in the battle of Rasaca, Georgia, May 14, 1863; was elected Superintendent of Public Schools of this county in 1868, and re-elected in 1870; took over as editor and publisher of The Mountain Echo, at London in 1875, the first paper published in Southeastern Kentucky, and now the oldest Republican paper in continuous publication in Kentucky, was elected County Judge in 1876; president of the Cumberland Valley Land Company in 1887, and president of the First National Bank of London, in 1888; the latter two positions he held at the time of his death on September 16, 1903.  He represented the Kentucky Conference of the Methodist Episcopal Church at Cincinnati, Ohio, in 1880, and at Cleveland, Ohio, in 1896; was Department Commander of the Department of Kentucky Grand Army of the Republic in 1896; was elected to the Fifty-sixth Congress, re-elected to the Fifty-seventh and fifty-eighth Congress, being elected to the latter position last November.  Soon after the war he was married to Miss Martha Faris, daughter of Mr. J. B. Faris, of this county, now deceased, to which union there were nine children born, three of whom died in infancy, the other six still survive him.  Mrs. May Melcon, James M. Boreing, Miss Sallie Boreing, Mrs. Bella Dora Young, Miss Julia Tevis Boreing (Williams), John R. Boreing.

Judge Boreing was born of poor and dependent parentage, having to work away from home much of the time at very meager prices for sustenance for himself and his father’s family, carrying home at night on his back the proceeds of his day’s wages in meal corn or bacon.  From his youth he was an indomitable and untiring worker, and by dint of his own industry and economy he succeeded in accumulating a comfortable fortune for a man in this section of the state.  Bearing reared by a pious mother he very early in life imbibed the spirit of Christianity and attached himself to the Methodist Episcopal Church, in which organization he was a strong pillar at the time of his death.

On September 5, 1867, Vincent Boreing married Martha Faris, a daughter of James and Miriam Partin Faris.  The couple were the proud parents of nine children: 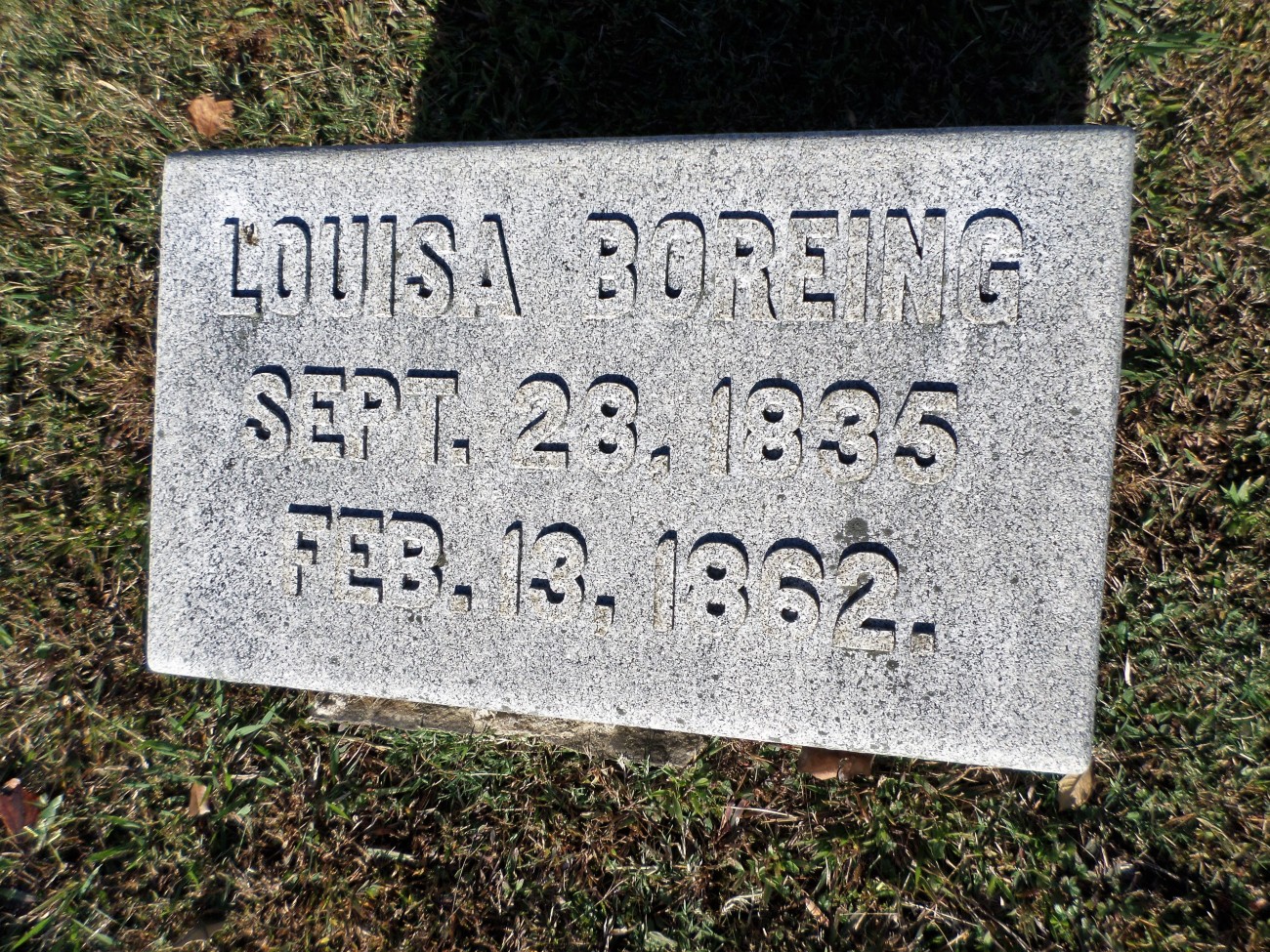 Vincent Boreing’s sister, Louisa Boreing died in 1862 while the war waged on.  She was just 27 years.

Son Amon Boreing died in 1880 at the age eight months. 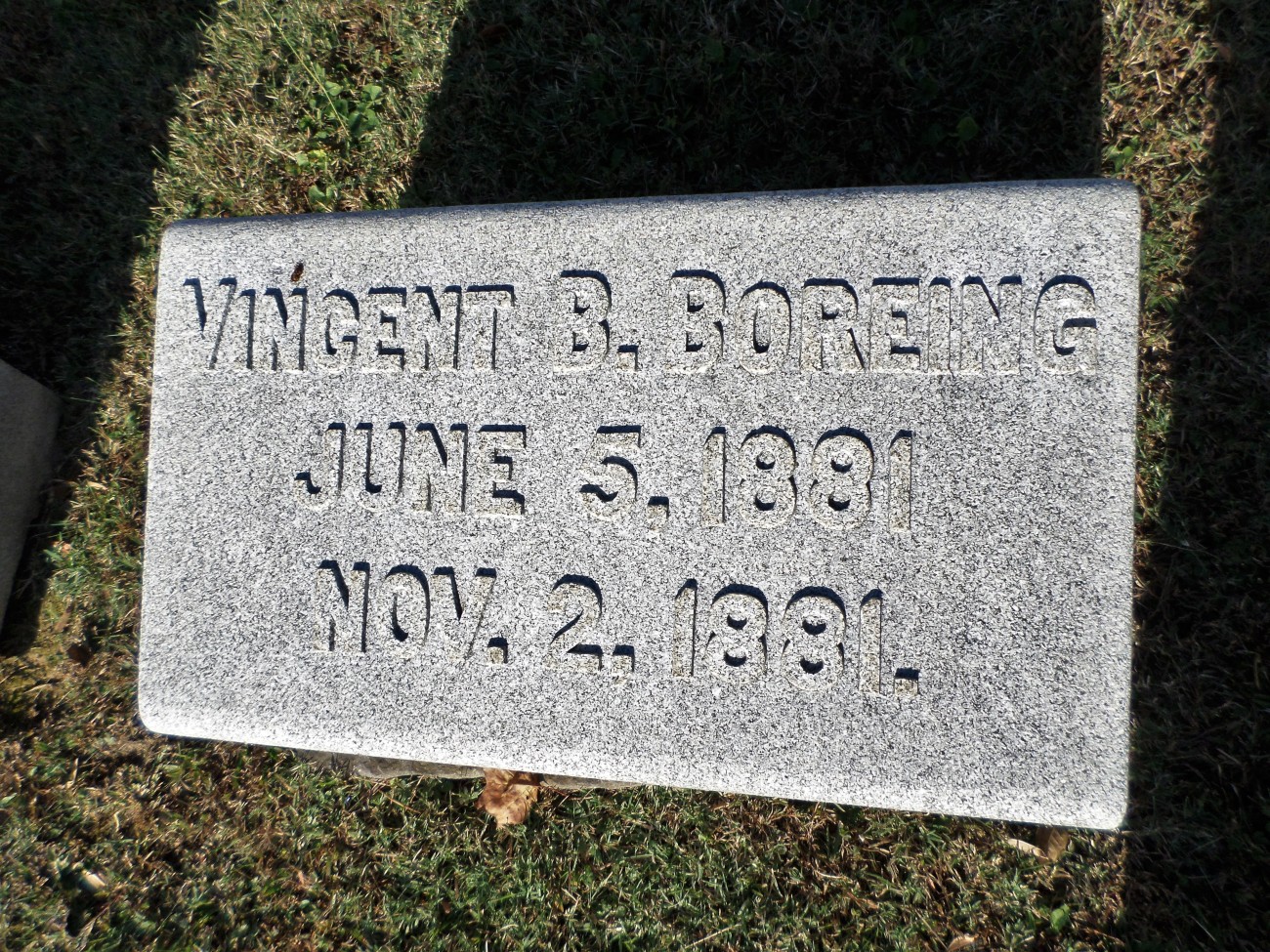 Son Vincent Boreing died at the age of five months in 1881.

One of the twins, Robert F. Boreing died at the age of less than a month in 1882.

Rev. Amon Boreing, of Covington, was called by telegram to the bedside of his father, Mr. Murray Boreing, an account of whose illness has been heretofore given [he died of malaria].  At 5:30 Saturday morning the angels came, the pinioned spirit was released from its tenement of clay and the loving wife was left a widow, the devoted children, fatherless.  Mr. Boreing was about 75 years of age, an upright and highly esteemed old gentleman.  He lived to see a large family of children grow up to maturity around him, and some of them rise to eminence in their chosen callings.  His remains were laid to rest Sunday on the hill just east of town, where lie buried the earthly hopes of many a sorrowing one.

The remains of Mr. Murray Boreing were interred Sunday with the honors of the Grand Army of the Republic and surpassed in point of impressiveness any burial services ever held here.  The dense throng of people in attendance attested the high esteem in which he was held, while the funeral march, rendered so touchingly by the London brass band and the mournful tolling of bells, added deep solemnity to the occasion. 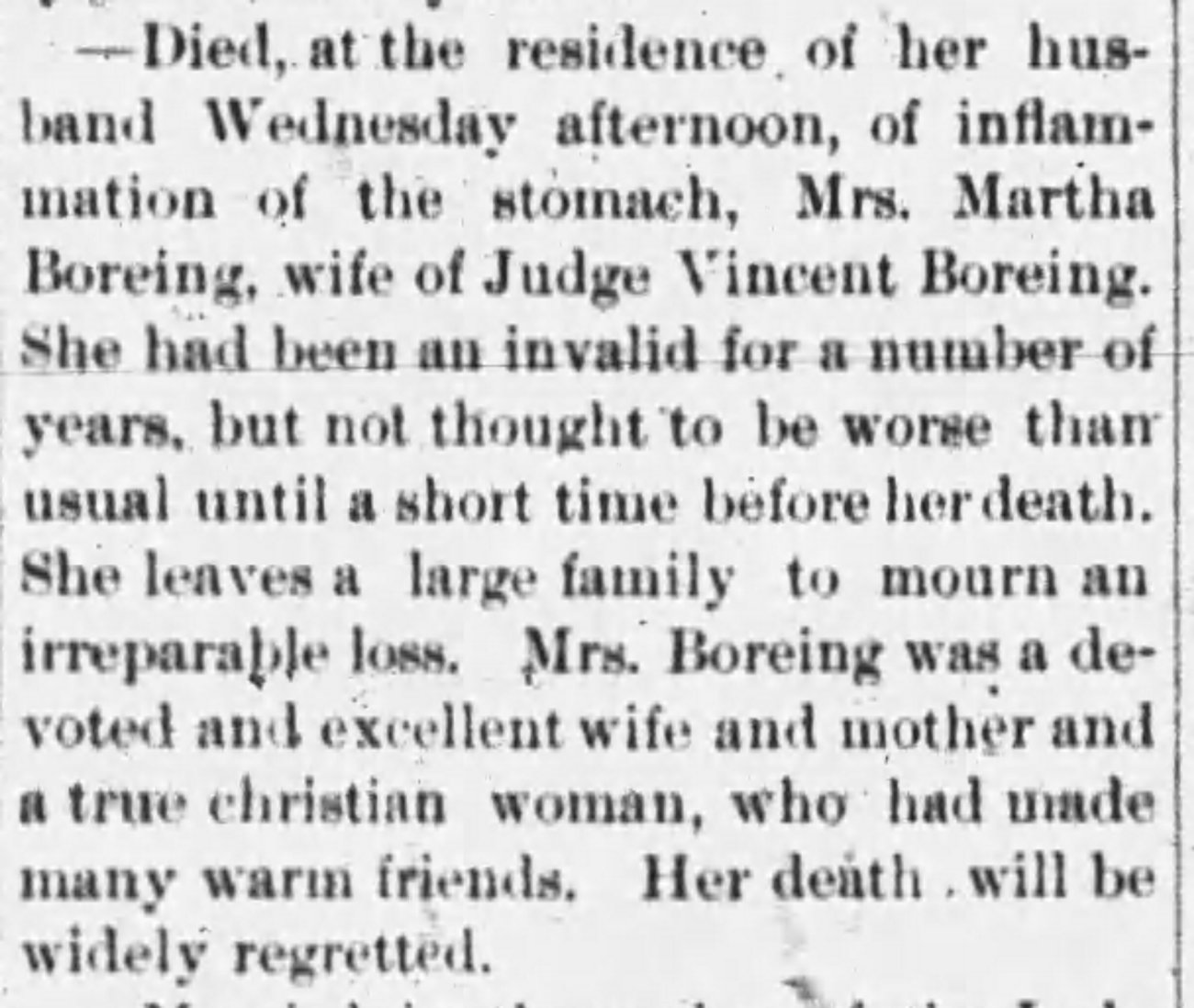 Died, at the residence of her husband, Wednesday afternoon, of inflammation of the stomach, Mrs. Martha Boreing, wife of Judge Vincent Boreing.  She had been an invalid for a number of years, but not thought to be worse than usual until a short time before her death.  She leaves a large family to mourn an irreparable loss.  Mrs. Boreing was a devoted and excellent wife and mother and a true Christian woman, who had made many warm friends.  Her death will be widely regretted.

The youngest son, John R. Boreing, died in 1924 at the young age of 40. In a 1911 article in many newspapers, including The Muskogee Times Democrat, it read that at Manchester Kentucky, ‘Attorney John R. Boreing, son of former Congressman Vincent Boreing, was stabbed below the heart and dangerously wounded today by Judge D. W. White in a quarrel which arose over the sale of White’s land to satisfy a judgment in a suit won by Boreing.

‘Boreing sued for a tract of land claimed by Timmons Harmont of the Harmont Tie company of Chillicothe, Ohio, against W. D. and J. E. White, and got judgement.  The land was to be sold today and Boreing and his client were in Manchester to attend the sale.

‘They were passing the White residence when he invited them in.  They engaged in a dispute and the stabbing followed.  Young Boreing lies in a critical condition.’

John Boreing survived this attack on his life and lived another 13 years.

Vincent Boreing’s brother, Amon Boreing, died in 1925 at the age of 83 years. 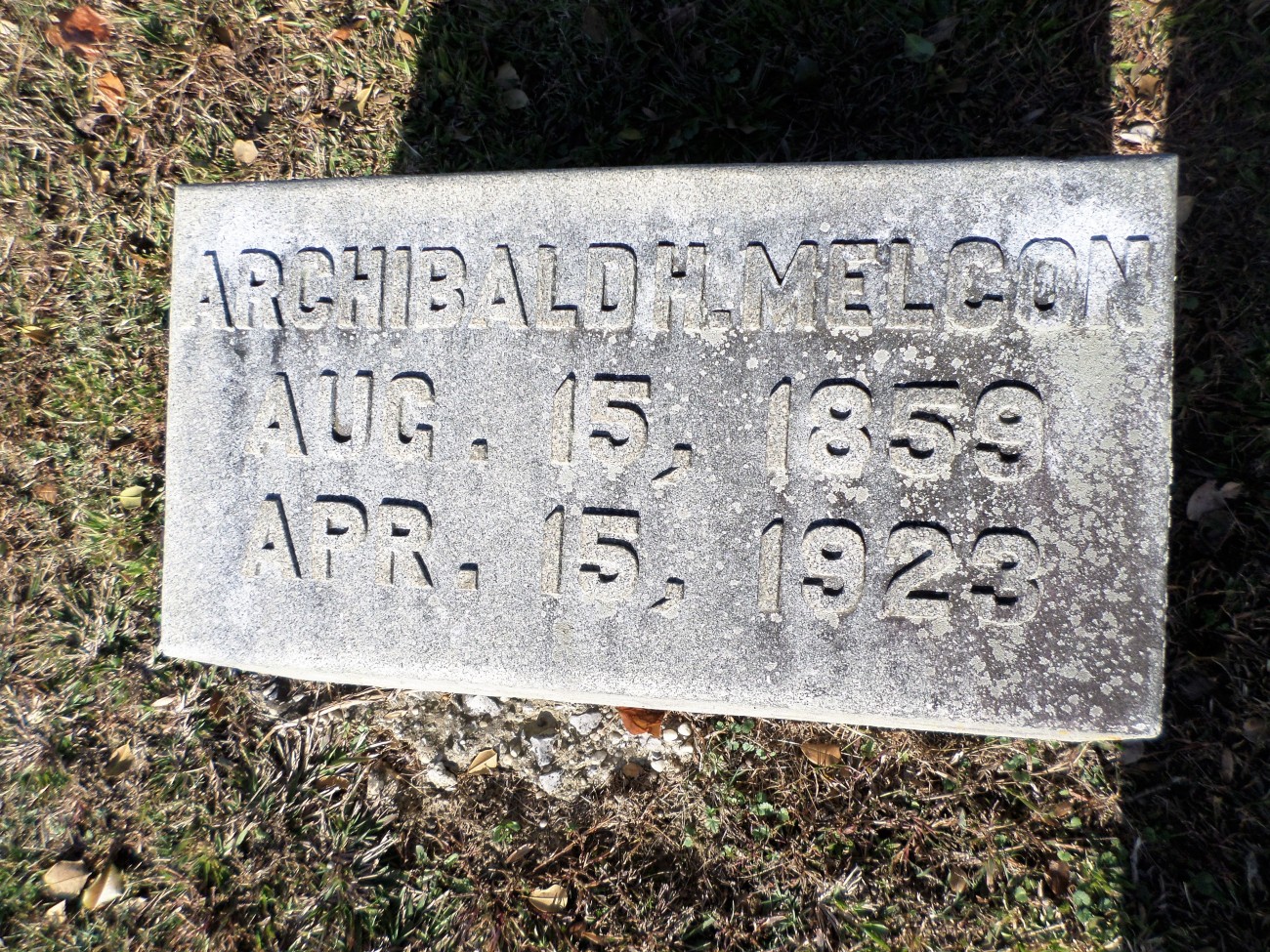 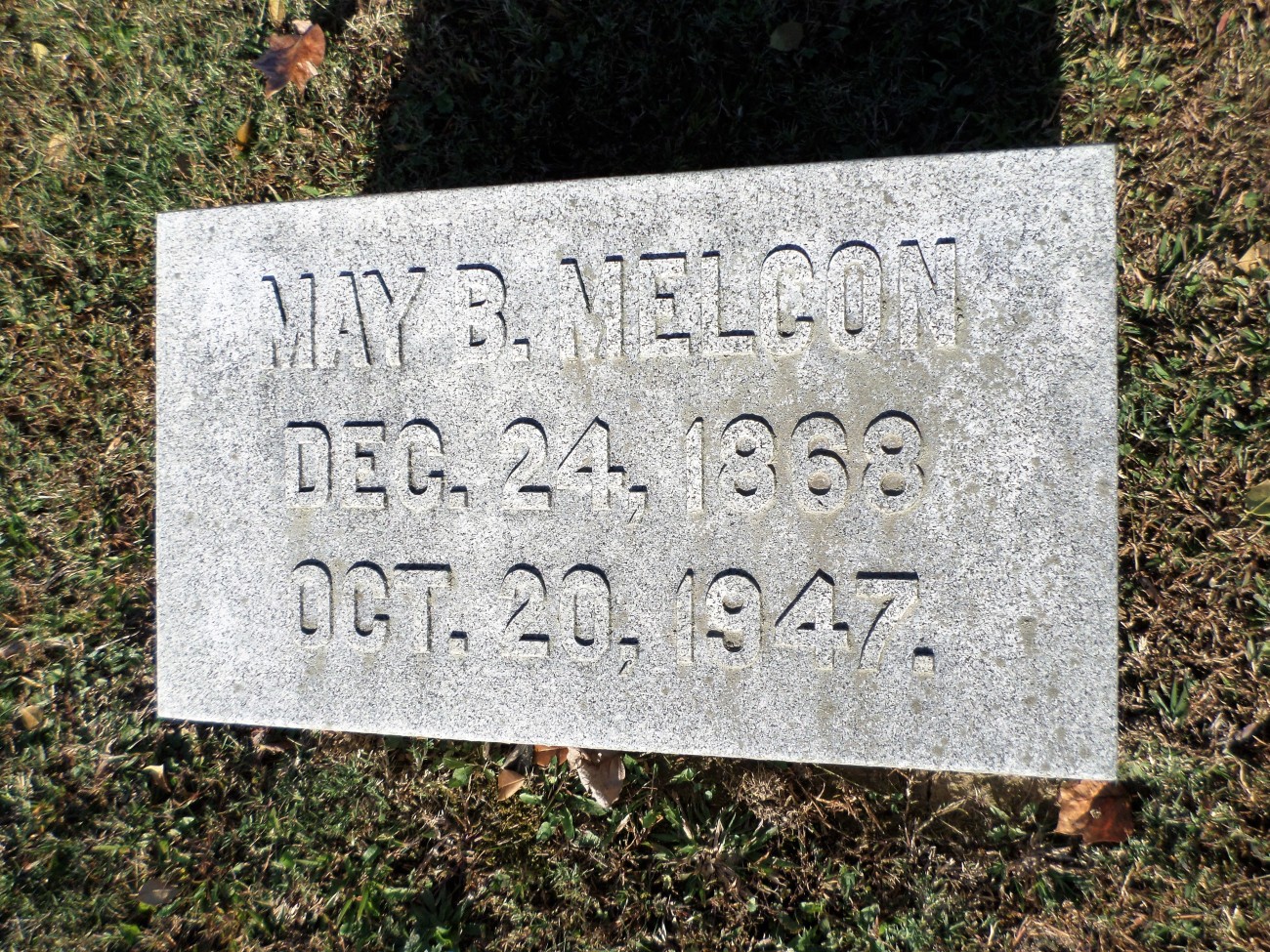 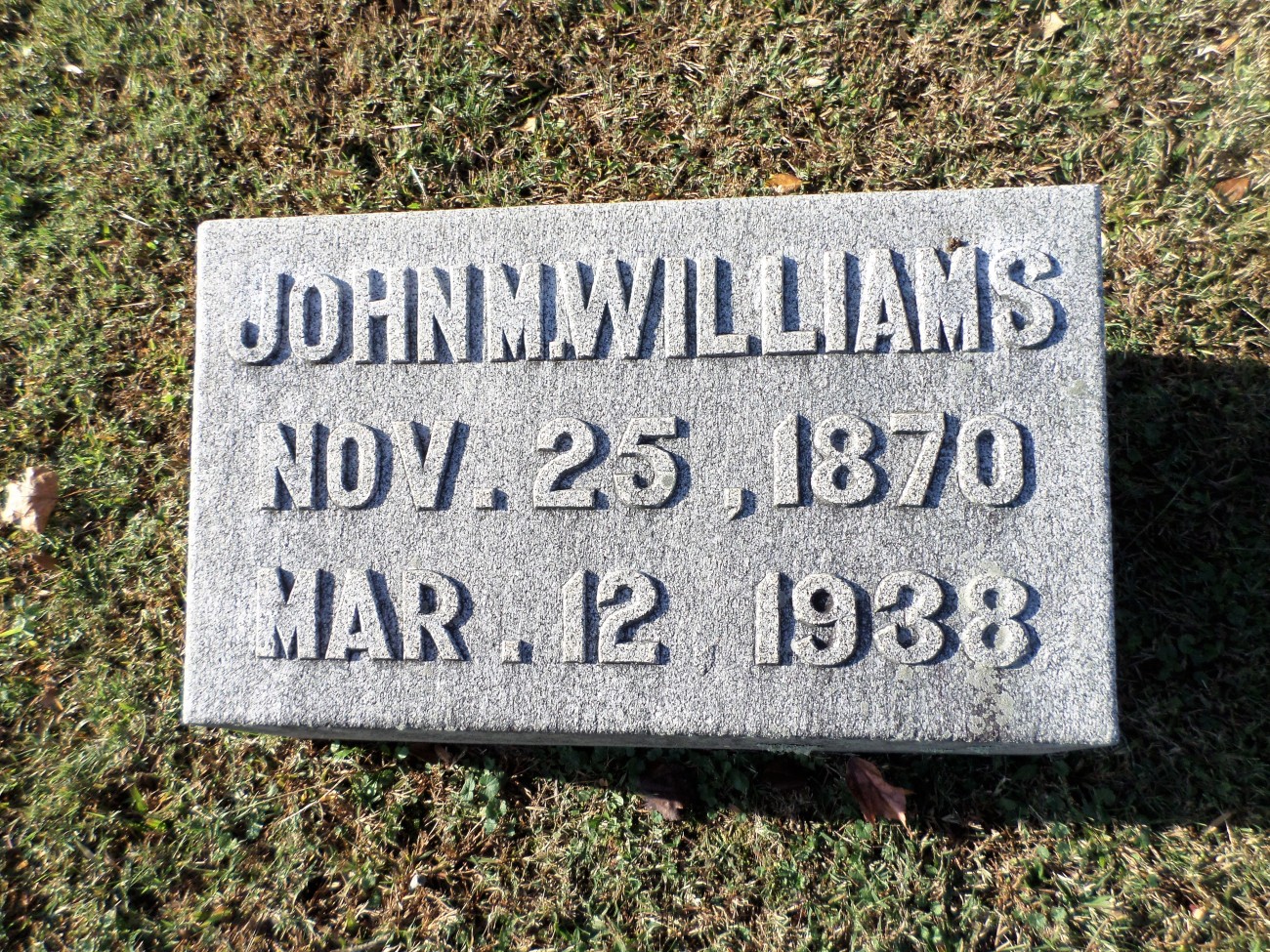 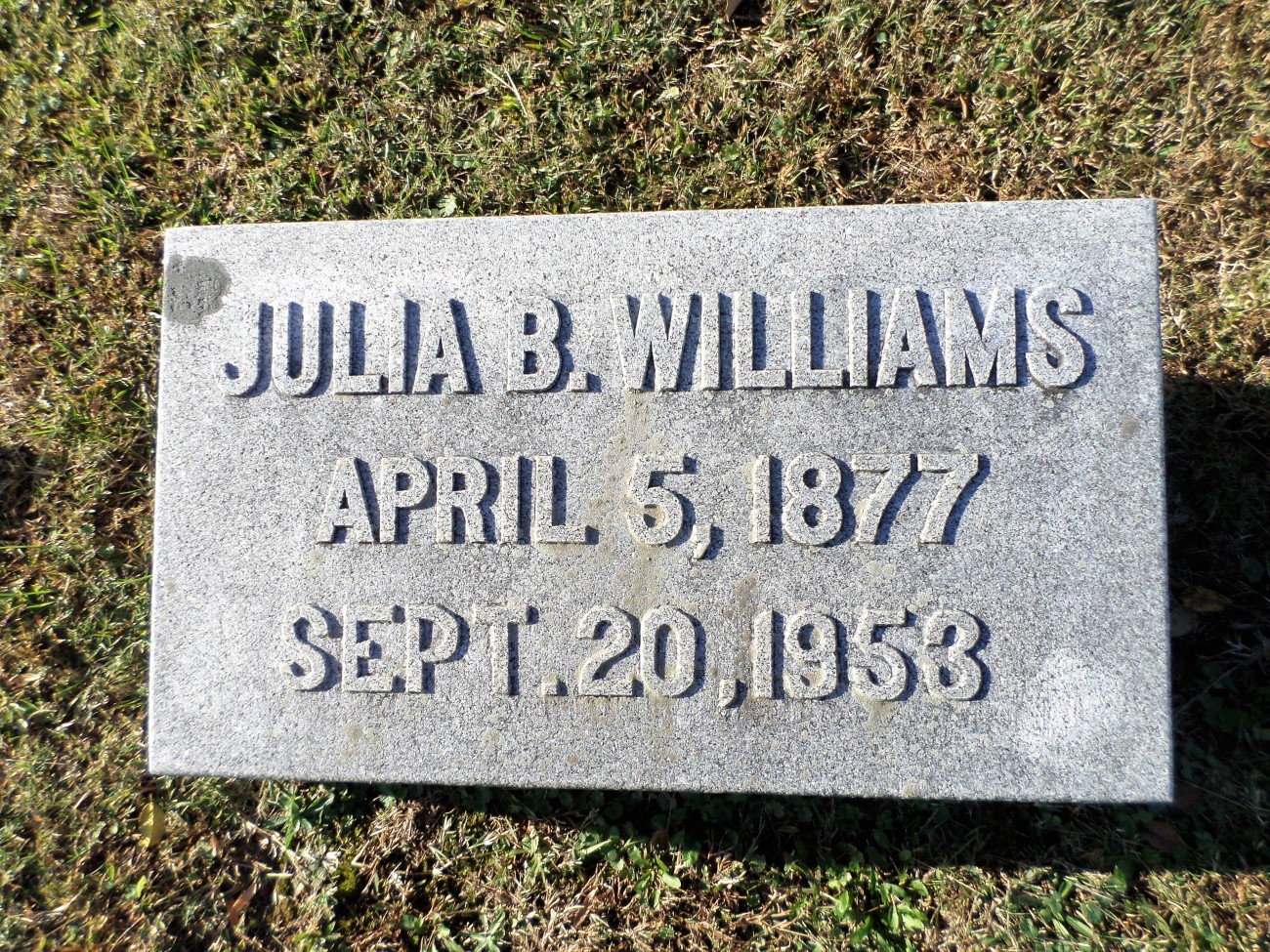