By Kentucky Kindred Genealogical Research on November 5, 2019 • ( Leave a comment )

In planning this post I intended to use the marriage certificate for Richard H. Cole and Elizabeth Canup, but luck was with me and I have so much more to share.  Richard, the son of Thomas Cole and Martha Wilkinson, was born in Virginia.  Elizabeth, the daughter of Francis and Barbara Canup, was born in North Carolina.  The family moved to Marshall County before Richard and Elizabeth were married by Henry Darnall, February 3, 1846.  Their marriage license is dated the day before. 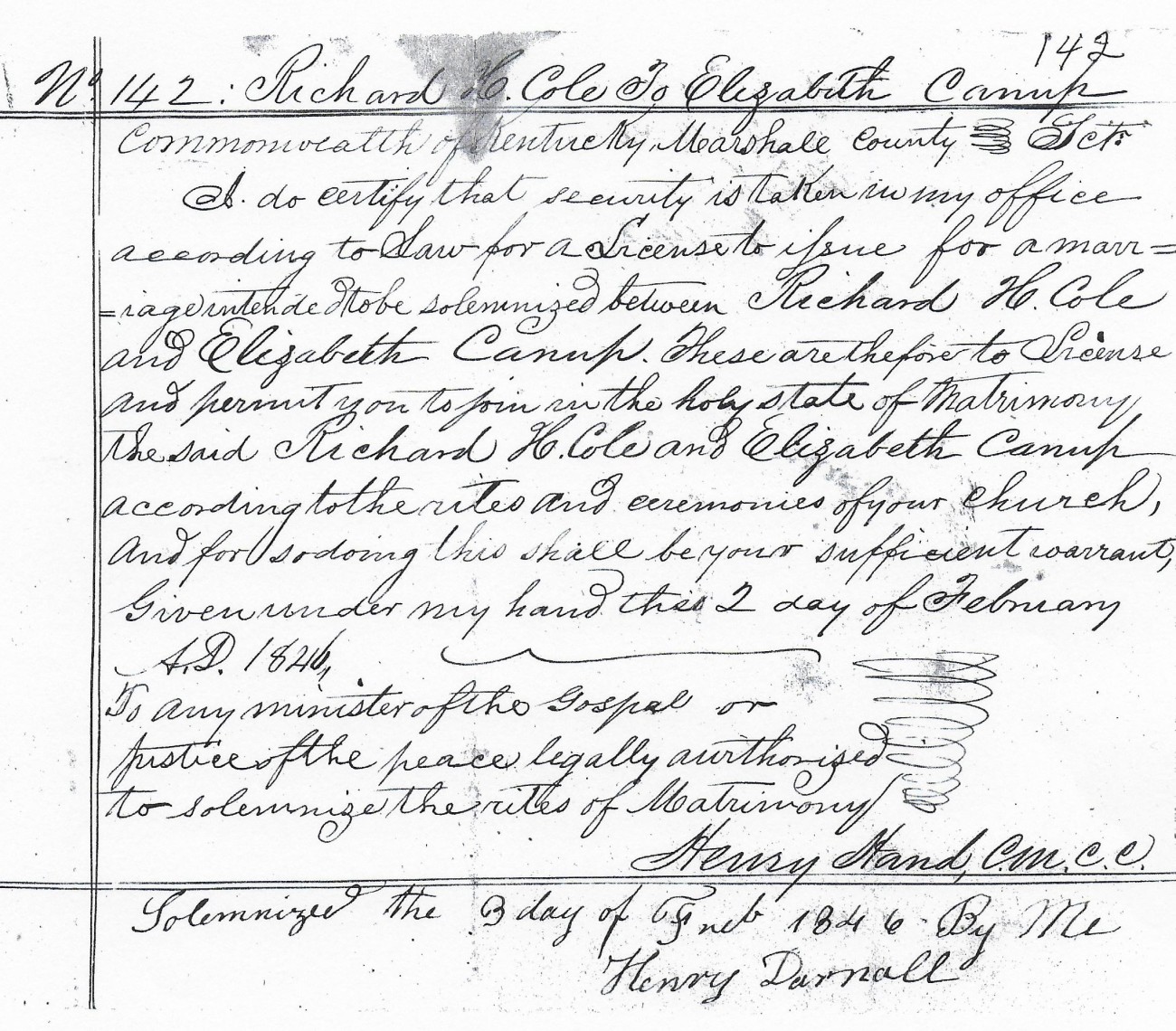 By the 1850 census Richard, 24, and Elizabeth, 23, had one child, a daughter, Louisa, aged 3.  The couple and daughter lived next door to Elizabeth’s parents and siblings.  Francis was 48, born in North Carolina, Barbara was 40, also born in North Carolina.  Six children of the couple were born in Kentucky:  Ely, 15; Jacob, 12; Joseph, 8; Martha, 6; Catherine, 4; and baby Etheline, 10/12.  The Canup’s must have moved to Kentucky at least by 1835.  This census record was taken by K. V. Kewland August 21, 1850.  However, Mr. Kewland also took a census on August 12, 1850, which shows Richard and Elizabeth Cole living next door to Thomas Cole and his second wife, Rebecca.  Richard’s mother, Martha Wilkinson Cole, died in 1836.  Marshall County was not formed until 1842, and then from the northern portion of Calloway County.  Calloway County records show Thomas Cole, of age, married Rebecca Britten, of age, widow, license dated June 30, 1838, date of marriage July 4, 1838, by Thomas Ford, Justice of the Peace.  One of the children’s death certificates gives Rebecca’s maiden name as Murray.  The census shows Thomas, 55, born in Virginia; Rebecca, 40, South Carolina; Virginia A., 21, Virginia; Sarah, 3; Clarissa, 10/12; Thomas, 7; and James, 5.  At least we can say Richard and Elizabeth, and their parents, lived very close.

Children of Richard H. and Elizabeth Cole from census records:

Richard H. Cole died in March of 1872.  He was buried in Cole Cemetery, on Cole Cemetery Road in southwestern Marshall County, just off Hwy 58.  Unfortunately, Ritchey and I did not visit this cemetery during our visit to the Jackson Purchase area.  Richard’s parents are buried here, his wife, several children and other relations.

In the 1900 census Elizabeth Cole is listed with Andrew and Norah J. Smith, aged 25 and 24.  Elizabeth is 74.  A note in the relationship box says ‘lives with Barbara Phillips, mother,’ who lived next door.  She lived nine more years, dying June 12, 1909.  She was laid to rest beside her husband.