Generally when I begin a research project I find interesting facts and newspaper articles.  But on this particular project there is so much information, and the cemetery is so filled with family members, this will probably be a series of blogs.  It started with one gravestone photo and one man – Rev. Burdett Kemper.

Burdett Kemper was born February 24, 1788, in what was then Lincoln County, and later became, Garrard County, Kentucky.  He was the son of John Kemper and Judith Burdett, both of Fauquier County, Virginia.  The family settled in what is now known as the Bryantsville area, in north central Garrard County.  John and Judith raised a large family – thirteen children:

Burdett Kemper lived in the Camp Dick Robinson area, just a few miles south of his parents.  He married Jemima Thompson February 16, 1819, the daughter of James Thompson, a Revolutionary War veteran and early surveyor of Kentucky, who gave consent for the marriage.

It was mentioned in some writings that due to the influence and teachings of his pious mother, Judith, Burdett Kemper had an excellent moral and religious training.  According to J. H. Spencer in his History of Kentucky Baptists, Burdett ‘had reached mid-life when, in March, 1830, he and his wife professed religion and were baptized for the fellowship of Forks of Dix River [originally Dick’s River].  He began to exercise in exhortation, and was ordained to the ministry in 1833. . . and invited to preach once a month at the church, and upon the resignation of John S. Higgins, became pastor of that congregation, a position he continued to occupy till the close of his earthly career.’  At one time the church numbered over 500 members during his time as pastor. 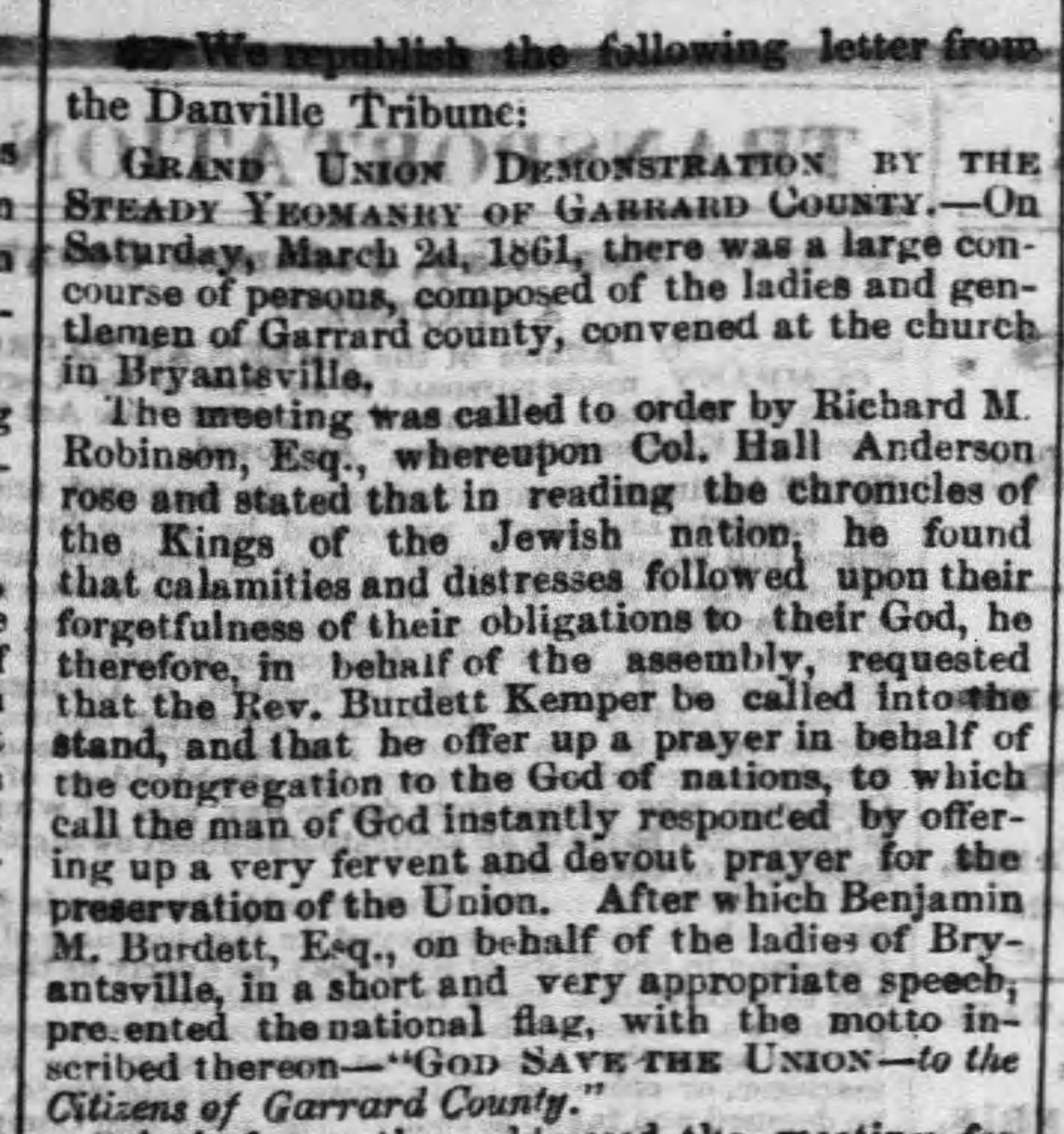 A year later the country was rocked with sounds of war.  From the March 19, 1861, issue of The Louisville Daily Journal, Burdett Kemper stood on the side of the Union.  Even though he owned slaves, ten by the slave schedules from the year before, Burdett knew that the nation needed to remain whole.

‘On Saturday, March 2nd, 1861, there was a large concourse of persons, composed of ladies and gentlemen of Garrard county, convened at the church in Bryantsville.’  Rev. Burdett Kemper was called upon to offer a prayer for the preservation of the Union.  A national flag, with the motto inscribed “God Save the Union – to the Citizens of Garrard County” was given to the ladies of Bryantsville.

Jemima Thompson Kemper did not live to see the end of the war, dying October 10, 1863.

In 1875 an interesting notice was put in the paper concerning the number of octogenarians living in Garrard County, noting Garrard County as the ‘most octogenarian locality in the Union.’  Several are mentioned who had reached 100 years of age, and a Rachel Garnett who was 104 years ‘a woman who remembers to have seen Gen. Washington in full regimentals.’  Rev. Burdett Kemper was 89 and had been minister of the Baptist church for 60 years.

The next year, even though the paper only lists him as 82, Burdett Kemper died March 18, 1876.  This small notice, stating ‘He had been a minister in the Baptist Church for over fifty years, and it is said that he immersed over 2,000 person during his ministerial services’ was printed in newspapers across the country – Eureka, Kansas; Milan, Tennessee; Macon, Missouri; Arkadelphia, Arkansas; Jasper, Indiana; Bellevue, Louisiana – and those are the ones I found in just a quick search.  He was a man well remembered. 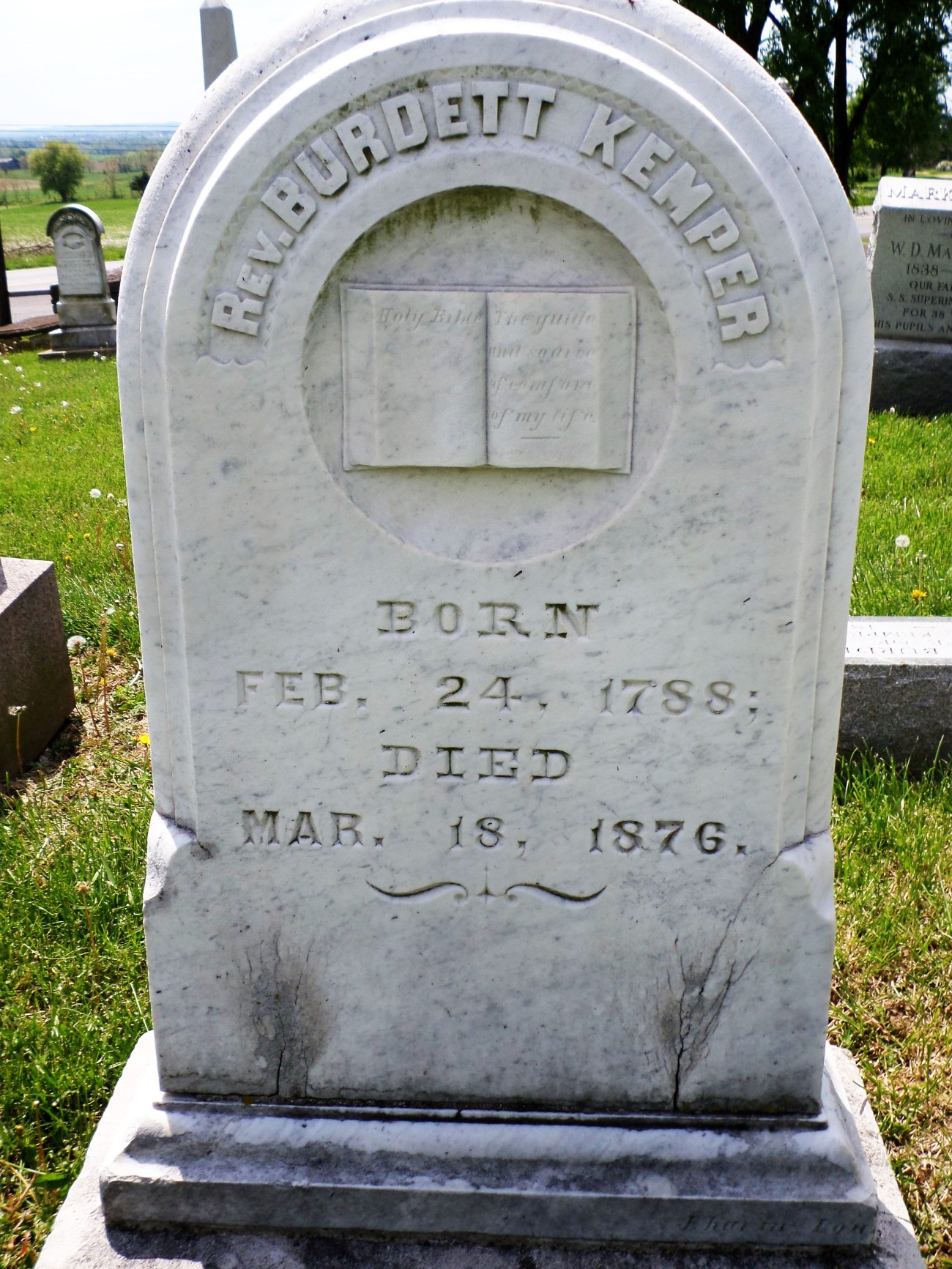 In 1882 the Forks of Dix River Baptist Church celebrated 100 years of the organization of the church.

‘The Baptist Association which has just closed its session at the Fork Church, was well attended, and the dinners spread on the grounds are said to have been, in point of quality and quantity, all the most exacting could wish.  One of the objects of this association was to celebrate the centennial anniversary of the organization of this church.  Among the ministers present were Revs. Caperton, Booth, Taylor and Harvey Kemper, who is a brother to Rev. Burdett Kemper, who was pastor of this church 30 or 40 years.  Rev. Harvey Kemper is a resident of Missouri, and this is his first visit here for 35 years.  He is about 80 years old and a good speaker yet.’

In all the articles about Rev. Burdett Kemper none agree on the number of years he was pastor at the Forks of Dix River Baptist Church, his age or probably the actual number of people he baptized.  An exact number is not necessary.  What is necessary to know is that he lived his life full of enthusiasm for the Lord and the people with whom he associated.  Our hats are off to you, Rev. Kemper.  You will be remembered!